Australian sporting great Greg Norman has been compared to feared US gangster Al Capone by a writer who was booted from a press conference after asking hard questions about the Saudi-backed LIV golf tour.

In extraordinary vision which has gone viral online, respected US writer Alan Shipnuck tweeted an image of Norman lurking in the background as security forcibly removed him from the scene at London’s Centurion Golf Club.

Shipnuck, who has covered golf globally for 25 years, later tweeted about his heavy- handed experience.

‘Well, a couple of neckless security dudes just physically removed me from Phil Mickelson’s press conference, saying they were acting on orders from their boss, whom they refused to name. (Greg Norman? MBS? Al Capone?),’ he wrote on Twitter.

‘MBS’ refers to Saudi crown prince Mohammed bin Salman Al Saud, who has been accused of ordering the murder of journalist Jamal Khashoggi.

Well, a couple of neckless security dudes just physically removed me from Phil Mickelson’s press conference, saying they were acting on orders from their boss, whom they refused to name. (Greg Norman? MBS? Al Capone?) Never a dull moment up in here.

Greg Norman is the CEO of the controversial LIV golf tour, which is Saudi-backed and competing directly with the PGA tour

He then shared a text exchange to his 80,000 plus followers with LIV tour CEO Norman, who audaciously pretended he was unaware of Shipnuck’s treatment.

The two-time British Open winner was soon exposed thanks to photographic evidence at the scene.

‘You cannot make this sh*t up!,’ Shipnuck later posted on Twitter.

‘I texted Greg Norman before someone sent me this video – I had no idea he was lurking behind me.’

When Shipnuck sent Norman proof that he’d been well aware he had been removed from the media opportunity, the man affectionately known as the ‘Great White Shark’ didn’t reply.

The incident is just the latest clash in what has already been a controversial start for the new Saudi-backed golf venture. 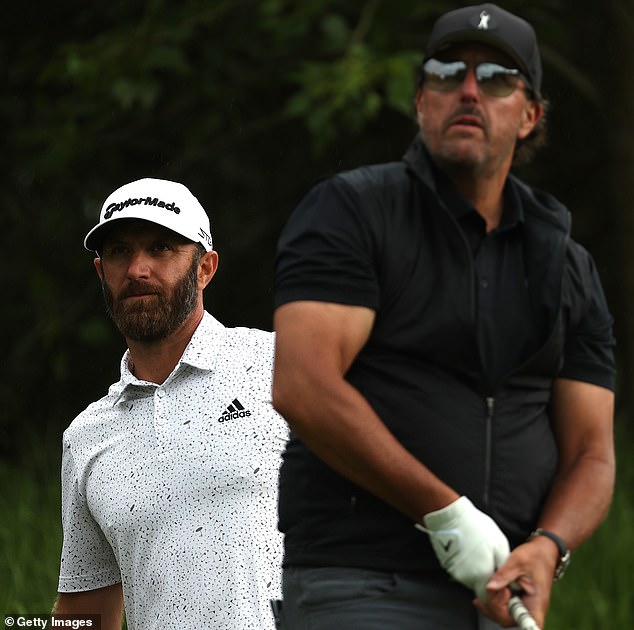 Within 30 minutes of the first golfers teeing off on Thursday at the Centurion Club, the PGA Tour announced that Phil Mickelson, Dustin Johnson and 15 other PGA Tour members playing in the St Albans event had been suspended.

In response, LIV Golf said the ban was ‘vindictive and deepens the divide between the Tour and its members.’

Mickelson – who is being paid a reported $200million for defecting to the rogue  tour, finished the first round of LIV’s opening event tied for seventh alongside Johnson and Sam Horsfield at 1-under par.

South African Schwartzel is the outright leader, leading the field at 5-under par.