Jane Campion became only the third female director ever to win a Best Director award at the Golden Globes on Sunday evening as actors, filmmakers and studios largely ignored the ceremony for a lack of diversity.

Campion, 67, received the honour for her dark western The Power Of The Dog, one of three awards collected by the film from a total of seven nominations.

Success: Jane Campion became only the third female director to win a Best Director award at the Golden Globes on Sunday evening as actors, filmmakers and studios largely ignored the ceremony for a lack of diversity

Campion’s success served to highlight a distinct gender imbalance at the ceremony and the film industry as a whole, with the New Zealander only the third female to win best director in its 78-year history.

Barbra Streisand was the first for her 1984 musical drama Yentl and Chloé Zhao second in 2021 for the critically-acclaimed Nomadland.

The Power Of the Dog ended up winning three of the seven awards it was nominated for, Best Motion Picture – Drama, Best Performance by an Actor in a Supporting Role in a Motion Picture (Kodi Smit-McPhee) and Best Director – Motion Picture (Jane Campion). 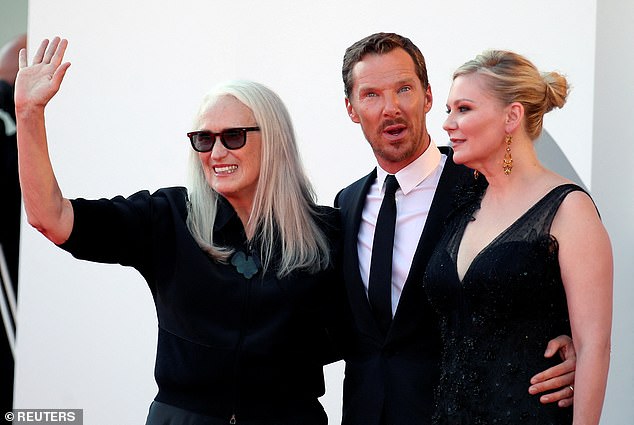 Amazing: Campion, 67, received the honour for her dark western The Power Of The Dog, one of three awards collected by the film from a total of seven nominations (Jane is pictured with the stars of the film Benedict Cumberbatch and Kirsten Dunst at Venice Film Festival)

The film, based on Thomas Savage’s 1967 novel and set in 1925 Montana, focuses on two rancher brothers who become increasingly estranged after the younger (Jesse Plemons) marries a widow (Kirsten Dunst) with a nearly grown son who’s studying to be a surgeon (Kodi Smit-McPhee).

The older brother, a hard-charging rancher played by Benedict Cumberbatch, is witheringly cruel to both his sister-in-law (who increasingly turns to alcohol to numb her anxiety) and her son.

Last year NBC announced it would not broadcast this year’s Golden Globe Awards, after controversy over a lack of diversity among the members in the HFPA membership. 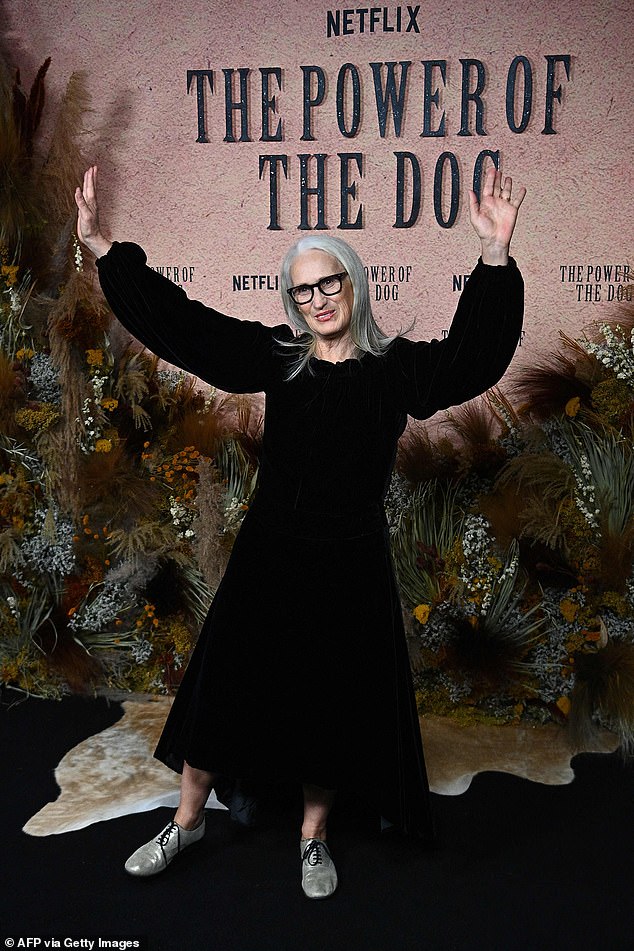 At this year’s event — which is usually hailed as ‘the party of the year’ — there was no celebrities, no live audience, and no red carpet. The whole award show reportedly took an hour and a half and afterwards there was a poolside reception.

It was revealed on Tuesday by Variety that the Globes’ talent booker reached out to several publicity agencies about getting celebrity presenters, but no celebs agreed to take part.

HFPA president Helen Hoehne, gave a speech focusing on the organisation’s attempts to diversify and a focus on its philanthropy work after a controversial year which culminated in last year’s televised ceremony suffering a 60% drop in viewers. 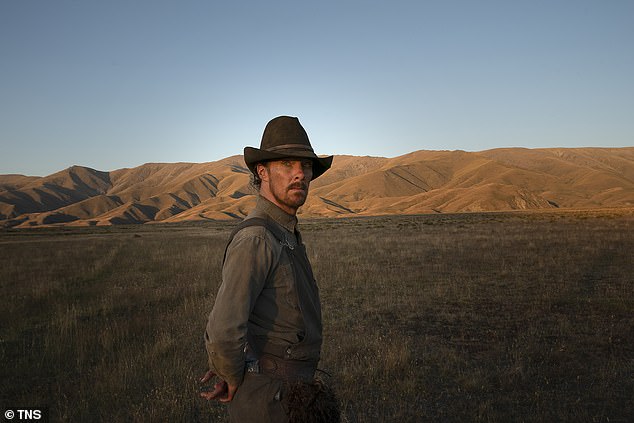 Plot: The film, based on Thomas Savage’s 1967 novel and set in 1925 Montana, focuses on two rancher brothers who become increasingly estranged

‘Last year the Hollywood Foreign Press Association was challenged to change – and we did,’ said Hoehne. ‘Both internally, within the Association, as well as adding 21 members to bring fresh perspectives.

‘We are on a journey of change and we’re not going to rest. We are going to be outspoken about what we’re learning and challenge others to join us.’

Kyle Bowser, senior vice-president of the NAACP Hollywood Bureau, spoke of the ‘Reimagine Coalition,’ a joint five-year initiative to increase diversity, equity, and inclusion across the global entertainment industry. ‘Imagination is the currency that sustains and propels the entertainment industries,’ he said during the ceremony. 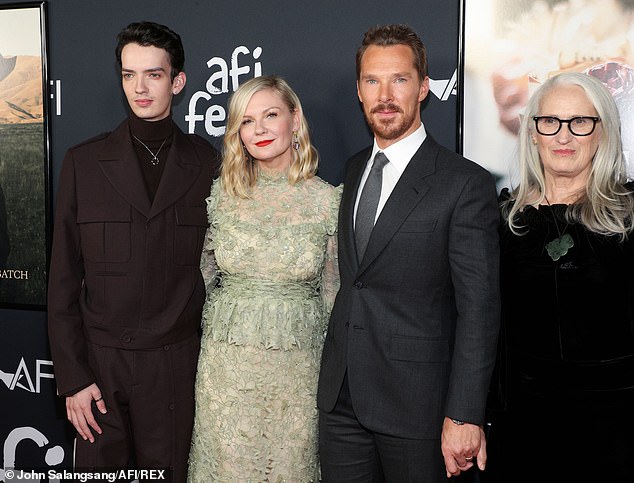 A series of LA Times investigations last year revealed the lack of diversity in the HFPA’s voting membership. The expose reported that the 2021 voting panel did not include any Black members out of its 87 members.

In response to the LA Times article, the HPFA introduced a series of new bylaws and in October 2021, appointed 21 new voters to their board and created a new board of directors.

The organization reports that it is the largest and most diverse class of new members in its history. Six of the new members are Black, 10 are women, six are Latinx, five are Asian and four are Middle Eastern/North African.

They also announced they hoped by 2023, the ethnic-minority of membership of the HFPA will have increased by 50%.

Mark Ruffalo and Scarlett Johansson were the stars leading calls for a Golden Globes boycott, with Scarlett saying she had faced ‘sexist questions and remarks by certain HFPA members that bordered on sexual harassment.’

The organization’s track record of overlooking black- and minority-led films and television series at the Golden Globes has also been frequently criticized. 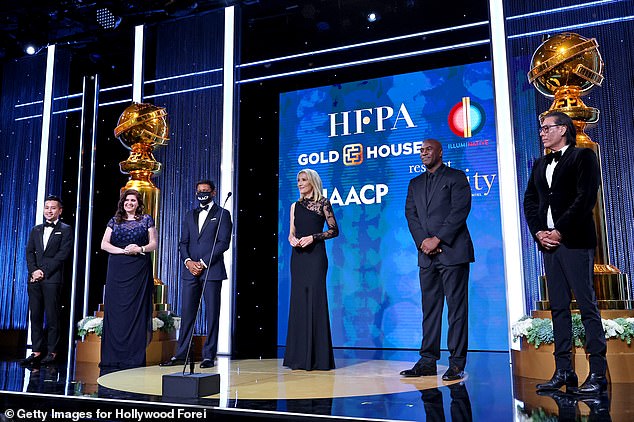 This year’s nominations included nine people of colour across the acting and directing categories – the same number as for the 2021 awards.

Back in March, former president Philip Berk was expelled for forwarding an email dubbing Black Lives Matter a ‘hate movement,’ and two consultants hired to address the HFPA’s diversity issues quit over a lack of progress.

There were additional claims that the HFPA had not been inclusive enough to women or members of the LGBTQ community.

Best Performance by an Actor in a TV Series (Drama)

Best Actor in a Limited or Anthology Series

Oscar Isaac – Scenes from a Marriage

American Crime Story: Impeachment is up for Best Limited or Anthology Series

Best Actor in a Supporting Role on a TV Series

Best Actress in a Limited or Anthology Series

Jessica Chastain – Scenes from a Marriage

Jane Campion – The Power of the Dog – WINNER

Best Actor in a Film – Drama

Javier Bardem – Being the Ricardos

Benedict Cumberbatch – The Power of the Dog

Denzel Washington – The Tragedy of Macbeth

Best Actor in a Film – Musical/Comedy

Anthony Ramos – In the Heights

Kodi Smit-McPhee – The Power of the Dog – WINNER

The Power of the Dog

Kirsten Dunst – The Power of the Dog

The Power of the Dog

Best Performance by an Actress in a Motion Picture – Drama

Nicole Kidman – Being the Ricardos – WINNER

The Power of the Dog – WINNER

Raya and the Last Dragon

Down to Joy from Belfast — Van Morrison

The Hand of God