Gold-digging boyfriend is ordered to pay back just £20 after stealing more than £24,000 from his widowed girlfriend over two years leaving her with just £23 in the account

A jobless gold-digging boyfriend stole more than £24,000 from the savings account of his widowed girlfriend, who had been given the money from her late husband’s life insurance policy.

Over a two year period, Andrew Baldry, 30, siphoned the money from his girlfriend’s bank account into his own, before using some of it to buy a car for himself.

Baldy, of Milford Haven, Pembrokeshire, Wales, who left just £23 in the account, also gave money to another woman he was having sex with.

He was jailed for a year at an earlier court hearing, after pleading guilty to fraud by false representation.

But in a follow-up hearing at Swansea Crown Court this week, Baldry has now been ordered to pay back just £20 his ‘devastated’ victim, who cannot be named for legal reasons.

Andrew Baldry (pictured right), 30, siphoned the money from his girlfriend’s account into his own, before using some of it to buy a car for himself

A Proceeds of Crime Act hearing was told how £24,000 had been transferred from the woman’s account into the account of Baldry, who had ‘benefited from his criminality to the tune of £22,000.’

But he had since spent it all and he now only had £20 in available assets – which the court ordered be paid to the victim.

The court heard how Baldry began a romance with the grieving woman three years after her husband died of cancer.

But Baldry began to help himself to the cash without her knowledge – and even gave money to another woman he was having sex with.

A court heard the woman would usually pay for shopping and nights out between the couple but she became suspicious when he bought himself a car and began to spend money.

When she quizzed him on his new found income he told her he had won £1,000 on a scratchcard.

The court heard the woman later checked her savings account to find there was only £23 left.

In a victim statement, the woman who cannot be named said: ‘I can never explain how devastated I am.’

Prosecutor Gareth Waite said £24,668.53 had been transferred to Baldry’s account over two years. 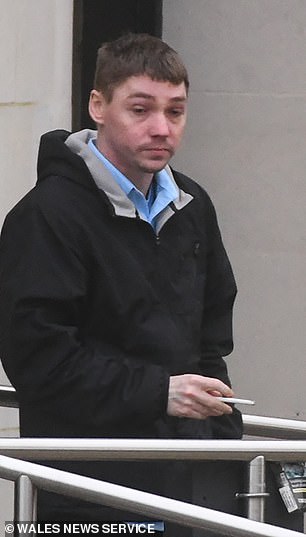 Baldry, of Milford Haven, Pembrokeshire, Wales, was sentenced to 12 months in prison in January after pleading guilty to fraud by false representation

He said: ‘A statement from the Nationwide bank it showed some £24,668.53 had been transferred to another account over the course of 44 separate small transfers conducted in the previous two years. The bank alerted the police.’

Baldry was sentenced to 12 months in prison in January after pleading guilty to fraud by false representation.

But he was released after serving just over three months because of the coronavirus pandemic.

During his sentencing hearing in January the court heard Baldry’s victim and her husband had drawn down funds from his life insurance policy following his diagnosis with terminal cancer so they could ‘enjoy their time together’.

Judge Geraint Walters told him: ‘You saw the opportunity and you took advantage of her vulnerability, I have not a shadow of a doubt.

‘She had money – you did not. It is hard to conceive of circumstances more mean.’

Judge Walters granted a confiscation order in the sum of £20, giving Baldry three months to pay with seven days in prison if he does not.

He said: ‘There was almost £25,000 in the account that would have provided her with some reassurance as to the future.

‘You drained the account, leaving just £23 by the time she detected it.

‘It was a tremendously mean piece of behaviour. Her children have been deprived of the benefit of the money.’