Tributes have poured in for the ‘Top Gun’ pilot killed in Monday’s horror chopper crash who only became a father last year – as a devastated mate reveals the final text he sent him before the tragedy.

Ash Jenkinson, 40, originally from Birmingham in the UK, was among four people killed when the Sea World EC130 helicopter he was flying collided with another EC130 chopper mid-air before it plummeted 30 metres onto a sandbank in the Gold Coast Broadwater on Monday.

Three others, believed to be a woman and two children, were critically injured in the crash and are fighting for their lives in hospital.

The pilot of the second helicopter, which had five passengers on board, miraculously managed to land on a sand bank in the middle of the Broadwater, with everyone aboard able to walk away. 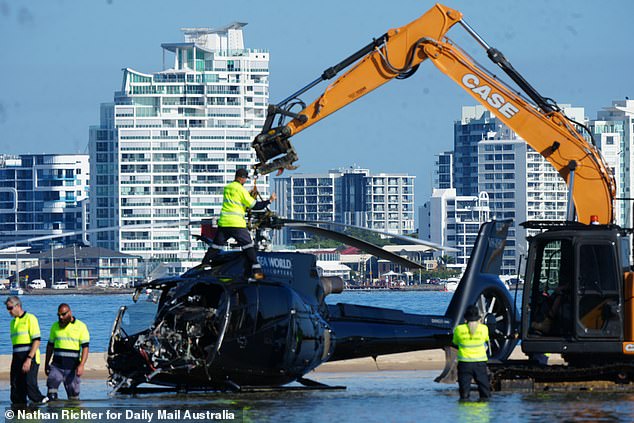 One of Jenkinson’s closest mates, Ritchie Gregg has paid tribute to the dead pilot saying he was ‘a top guy, top gun and the best dad’ and that his 17-month-old son Kaiden ‘would probably be asking where dad is’ right now.

Gregg said he sent a message to Jenkinson when he heard from another of their mates via social media that there had been a crash, asking ‘hope that wasn’t you?’

‘I heard at ten past two. So I sent the message and was waiting for an answer.

‘When he and Kosha had their son (in September 2021) he was the most excited dad. (Kosha) is very silent, she’s in shock Kaiden … would probably be asking where dad is.

‘They only got married in October,’ he explained.

‘Ash had the biggest heart and was the happiest guy. When he’d finished work flying he’d be straight home to see his boy. 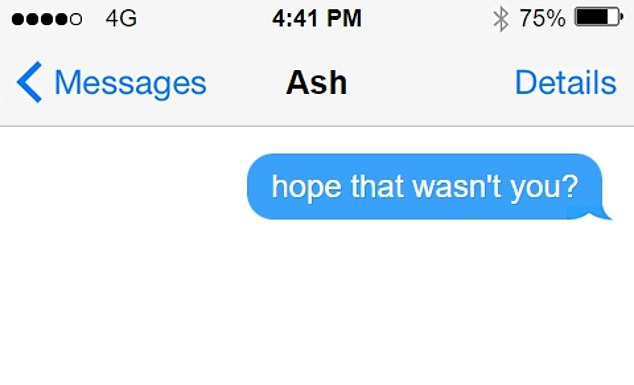 One of Jenkinson’s closest mates, Ritchie Gregg, sent a text message to Ash after learning about the tragedy on social media

‘Family was his biggest thing,’ he said.

Another close friend, Andy Taylor said he discovered the horrifying news with everyone else, on social media.

‘I saw it come up on a post on social media,’ Mr Taylor told Sunrise.

‘I tried to ring Ash straight away. At first, the phone was dead and then went to the voicemail.

He described Mr Jenkinson as ‘a big guy with a big heart,’ who helped out during the height of the NSW Northern Rivers’ flood crisis last year.

‘He did a lot of charity work, we did the floods down in Ballina and saved a lot of people,’ Mr Taylor told Sunrise on Tuesday.

The pilot transported food, water and other essential items to flood survivors who were cut off from their community for days.

‘He is the best of the best. I don’t know what else to say.’

Mr Jenkinson was the chief pilot at Sea World helicopters and ‘loved’ his job, according to Mr Taylor who spent a lot of time in the air with him.

‘He was so good at what he did. He was on point, I don’t understand what’s happened,’ Mr Taylor said.

‘It was his life. It was everything to him. 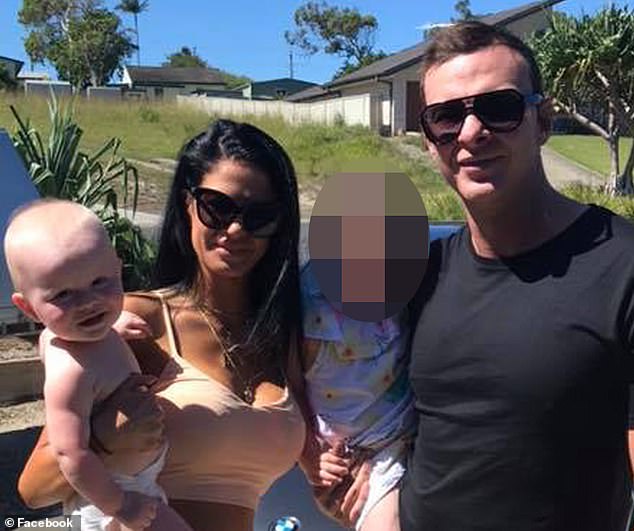 Mr Jenkinson is pictured with his wife and young son

‘I don’t think he had any other hobbies. That was it. That was everything for him.’

‘Above all he was a family man. He loved his family, loved his baby,’ Mr Taylor said.

‘His family was certainly first. Helicopter second. But they were the two passions of his life.’

The heartbreaking accounts come as an eyewitness to the tragedy describes the dramatic moment a young boy’s life was possibly saved when he couldn’t breathe in the immediate aftermath of the crash.

Gold Coast resident Travis Slatter was near the scene when he witnessed members of the public and Sea World staff scrambling to help possible survivors, including a ‘lady that put a tube in the boy’s throat to get him to breathe’.

Mr Slatter said the terrible scene ‘hit home with the young boy, after hearing him start to groan after the tube went in.

‘It was a relief that there was some sign of life, I hope he pulls through, but he has a lot to deal with after what happened.

He also described the heroism of the surviving pilot in the crash, who friends told Daily Mail Australia is a few years older than Mr Jenkinson who was aged in his late 30s.

Mr Slatter credits the second pilot with having ‘saved a lot of lives today’ after watching his colleague Ash Jenkinson’s helicopter plunge to the ground.

‘To see him first hand and how cut up he was and for a second he it looked like he was going to drop out of the sky too, but managed to put it down is crazy,’ Mr Slatter posted on Facebook.

Mr Slatter also watched as members of the public and then Sea World staff and finally paramedics taking over, describing the heroics of ‘a girl in black swimmers, three men and a legend in a party pontoon’ helping the survivors.

Another man was ‘pouring water on all the fuel’, and other ‘people were trying CPR’.

‘It was chaotic but everyone put it together until the experts took over and gave everyone the best chance,’ mr Slatter said. ‘Thoughts go out to everyone involved today.

‘Everyone tried, even to hold sheets and towels over people.’ 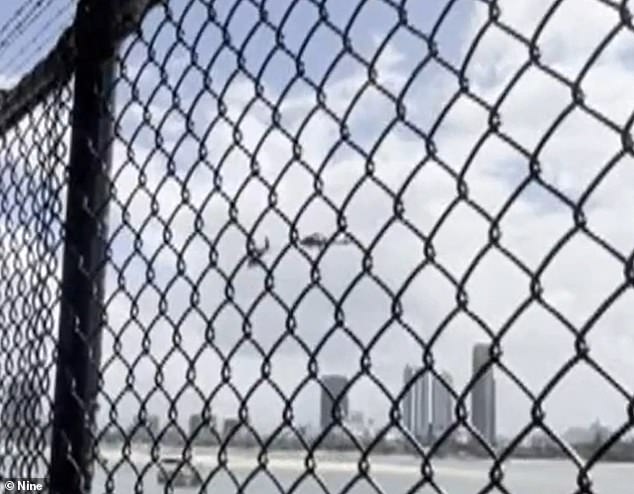 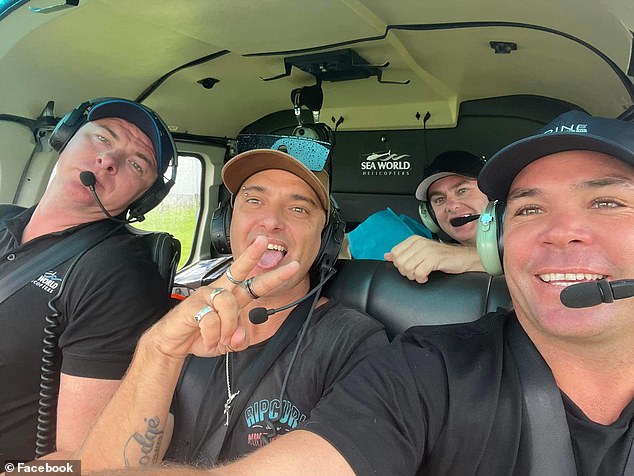 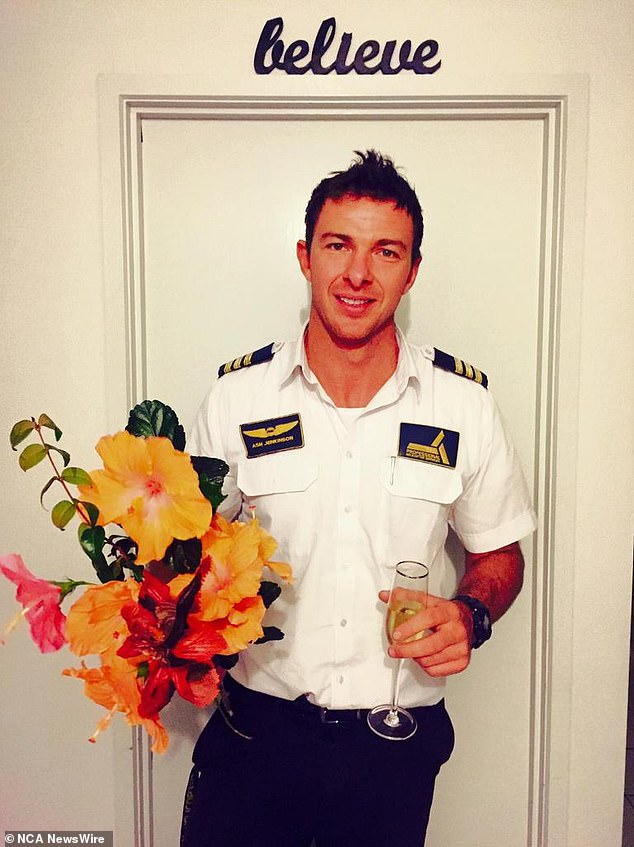 Mr Jenkinson was a hero during the 2022 flood crisis on the Northern Rivers. Picture: Supplied

Two of the people killed in the tragedy are British citizens who were in Queensland on holiday.

The three other passengers in the helicopter, a woman and two young boys, were rushed to hospital in a critical condition. Two were taken to Gold Coast University Hospital.

The third, a primary school-aged child, was taken by a RACQ LifeFlight Rescue helicopter to the Queensland Children’s Hospital in Brisbane.

On Tuesday, that child remains in a critical condition at Queensland Children’s Hospital.

Australian Transport Safety Bureau investigators retrieving the remnants  of the destroyed aircraft after the tide rose on Tuesday morning.

An investigation is also underway to figure out how the tragedy occurred.

The Transport Safety Bureau is examining whether a communication error, system malfunction or some other failure led to the two helicopters colliding.

The regional duty officer corroborated reports that one helicopter appeared to be taking off as the other was landing when the two slammed into each other.

Footage of the incident recorded by a witness appeared to support that.

Air safety experts told Daily Mail Australia that a helicopter already in the air should typically give way to a rising aircraft.