EXPRESS INFORMER > Travel > GoCompare is ranked the worst travel comparison site by Which? – and Skyscanner rated the best

GoCompare is ranked the worst travel comparison site by Which? – and Skyscanner rated the best

In a Which? survey of travel comparison sites, GoCompare has been rated the worst, with users panning it for poor functionality and high prices.

The consumer champion asked more than 2,200 holidaymakers to rate their experiences using nine holiday comparison sites over the past two years in a range of categories, including user-friendliness, price and market coverage.

GoCompare, which uses third parties for its flight and hotel searches, came bottom of the study with a poor customer score of only 45 per cent. Skyscanner came top.

Which? asked more than 2,200 holidaymakers to rate their experiences using holiday comparison sites over the past two years. GoCompare was ranked worst 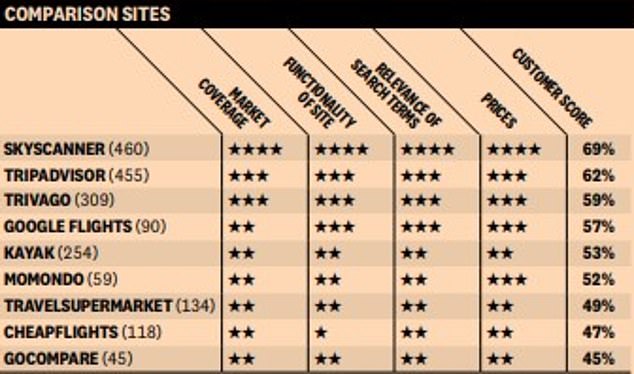 A table from Which? showing the ranking and customer satisfaction scores of nine travel comparison sites. The numbers in brackets relate to how many of those polled had used the site

As well as raising issues with functionality and high prices, Which? says GoCompare users criticised the site for poor market coverage and over whether users were shown prices for all major booking sites.

Cheapflights also fared badly, coming second bottom with a customer satisfaction score of 47 per cent. And it only scored one out of five for functionality.

TravelSupermarket was third bottom, managing a customer satisfaction score of 49 per cent. It scored two out of five in all categories.

At the other end of the table, top-ranked Skyscanner earned a customer satisfaction score of 69 per cent. It was also the only site to score four stars for value for money.

TripAdvisor came second overall and received a consistent three stars across all categories in the survey.

Customers said they liked being able to compare prices for a hotel and read customer reviews side by side.

However, earlier this year Which? Travel warned holidaymakers to take these reviews with a pinch of salt, claiming it found evidence that fake reviews had artificially boosted some hotels to the top of their rankings.

In a separate study, Which? Travel also pitted the seven most-used flight comparison sites against each other to see which consistently found the best price.

It found that Skyscanner produced the cheapest price six out of 10 times. Google Flights, however, found the cheapest fare just once. It also found the most expensive fare three times.

For a last-minute return flight to Krakow – voted Which? Travel’s best destination for a city break – the consumer champion says Skyscanner was at least £60 cheaper than any of the competitors it checked.

When it came to hotel comparison sites, Which? found Kayak sourced the cheapest deal in six out of 10 hotel searches, although it says the savings were relatively small in most cases. 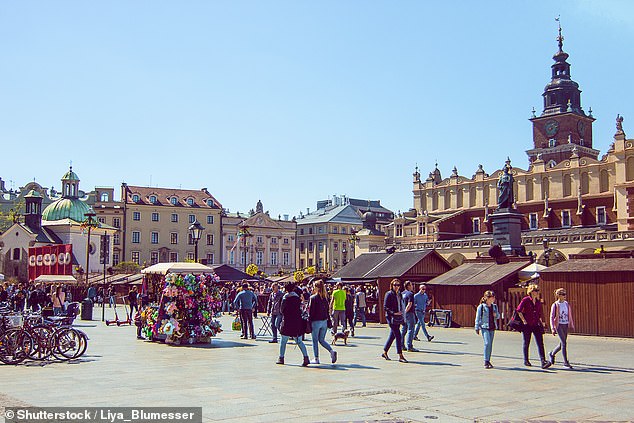 For a last-minute return flight to Krakow, pictured, the consumer champion says Skyscanner was at least £60 cheaper than any of the competitors it checked

TravelSupermaket came second, finding the cheapest price on four out of 10 occasions – although it also had the most expensive rates on four occasions.

Rory Boland, Which? Travel Editor, said: ‘Holidaymakers are known to spend hours and sometimes days looking for the best hotel rates and the best airfares, so for many of us travel comparison sites are the first port of call.

‘There are really only one or two sites you should consider using though if you want to save yourself both money and time.’

A spokesperson for GoCompare said: ‘As pointed out by Which?, while we specialise in areas such as car and home insurance, we use third party providers for other services which appeal to our customers.

‘We are disappointed by the results of Which?’s research and will be looking over the results to understand where we can improve these services to give people the best experience possible when using GoCompare.

‘While Skyscanner, who provide our flights comparison come top in Which?’s research, we take our responsibilities as an introducer to third-party providers very seriously and will make sure the functionality on our site reflects this.’

MailOnline Travel has also contacted Cheapflights and TravelSupermarket for comment.