Go wild in the isles: A former Norwegian ferry is a novel way to explore Scotland’s remote glories

By Sadie Whitelocks For The Daily Mail

A Scottish friend has never heard of Shuna. Me neither. But a quick Google search reveals it has a castle and a population of just three. It can’t be on the itinerary of many cruise companies — but then, St Hilda Sea Adventures is not like many other cruise operators.

It has three pint-sized explorer-style boats and I am booked on a six-night trip aboard the 82 ft-long Seahorse II, which previously served as a Norwegian ferry.

There are nine of us in total. The boat makes for a cosy retreat with the hardy vessel decked out with a handful of cabins on the lower deck and a spacious living-cum-dining area on the upper level. 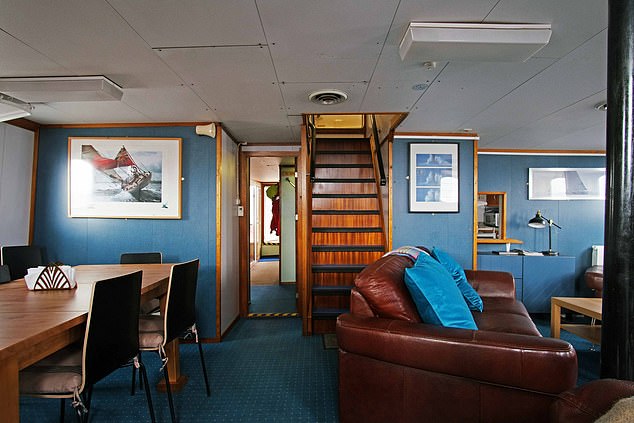 One of our first stops takes us to the village of Crinan in Argyll, where several of us venture into the Scottish ‘rainforest’ for a fairly strenuous hike through the undergrowth.

I pair up with Kat, an IT engineer based in London but originally from Russia, and we make it to the top of a small hill carpeted in flame-hued ferns, ash, birch and conifers serving up prime views of 12th-century Duntrune Castle.

We are the youngest passengers on board, 34 and 30 respectively, but everyone seems up for a challenge. Retired banker Mike, a self-described ‘yomper’, is here with wife Susina, then there’s Graham, who rises at 6.30am most days despite dodgy knees to get out on the Zodiac boat in a bid to spot otters. 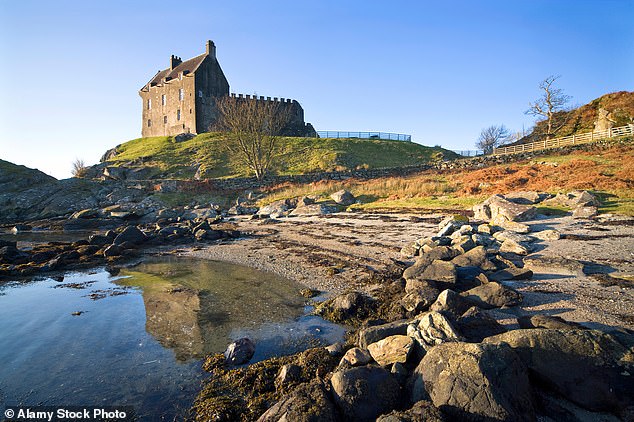 Historic fortress: After a strenuous hike in Argyll Sadie is afforded prime views of 12th-century Duntrune Castle, which lies near the village of Crinan

Sadie’s itinerary includes a visit to the island of Shuna (above), which has a population of three. While there Sadie watches sheep graze the grounds surrounding the eerie remains of a castle

On Shuna — that mystery island — burning logs scent the air from one of the five holiday cottages, pheasants dart about with their iridescent feathers shimmering in the sun and sheep graze the grounds surrounding the eerie remains of a castle built in 1911 by adventurer and philanthropist George Alexander Maclean Buckley. In the peaceful surrounds of Loch Melfort, Kat and I are greeted with magnificent sunset views of the mirror-like waters below and the islands beyond as we venture up a 4×4 track to a lofty ridgeline.

While we are gone, Mike, a keen fisherman, reels in 20 mackerel from the side of the boat and Donnel, the captain, helps him descale them ready for breakfast the next day.

On the subject of food, we are treated to a fine spread of delicious dishes courtesy of Andrea the chef. Fresh mussels from Loch Spelve cooked in a white wine and cream sauce, a moreish butternut squash tarte tatin and a rich chocolate torte are among the most popular creations.

While exploring the pretty surrounds of Seil — one of the Scottish isles where slate was mined for almost three centuries — Kat and I nip into the renowned Oyster Bar for some takeaway molluscs. The plump and creamy specimens prove to be some of the best I have ever tasted.

Unfortunately, after a stop in Mull, the mizzle descends into ‘dreich’ (the Scottish word for miserable weather) for the final couple of days — but walking in the rain still proves to be a joy when dressed in the right gear.

‘It feels like we’ve been aboard,’ Avril says on our last night.

Certainly, the Scottish isles, of which there are more than 900, have a way of transporting you to a different world — and discovering them on a trusty former Norwegian ferry is a cruise of an entirely different kind.