The most important ship in Russia’s Black Sea fleet, the Moskva missile cruiser, was badly damaged after ammunition on board blew up, Russia said on Thursday.

Earlier, the governor of Odesa said Ukrainian forces had damaged the warship with missile strikes on Wednesday, but did not give any evidence for the claim.

But Russia’s Interfax news agency later quoted Moscow’s defence ministry as saying the crew had all been evacuated and the cause of the fire was being investigated. Interfax reported ammunition on-board had detonated.

Ukrainian presidential advisor Oleksiy Arestovych said that ‘a surprise happened with the flagship of the Russian Black Sea Fleet’, the Moskva – a 600-foot, 12,500 tonne Project 1164 Slava class guided missile cruiser that was first launched in 1979.

‘It burns strongly. Right now. And with this stormy sea it is unknown whether they will be able to receive help. There are 510 crew members,’ he said in a YouTube broadcast. ‘We don’t understand what happened.’

The Mosvka (Moscow) gained notoriety early in Moscow’s war when Ukrainian border troops defending the strategic ‘Snake Island’ were heard in a viral audio recording telling the warship to ‘go f**k yourself’ after its crew called on them to surrender.

The 13 defenders of the island were taken into custody by Russian forces, and later released. Roman Gribov, who made the now-famous comment, received a medal.

Last month Ukraine said it had destroyed a large Russian landing support ship, the Orsk, on the smaller Sea of Azov to the northeast of the Black Sea.

Moscow has not commented on what had happened to the ship, but satellite imagery showed a large vessel destroyed and partially sunk in Berdyansk.

The most important ship in Russia’s Black Sea fleet, the Moskva (pictured, file photo) missile cruiser, was badly damaged after ammunition on board blew up, Russia said on Thursday 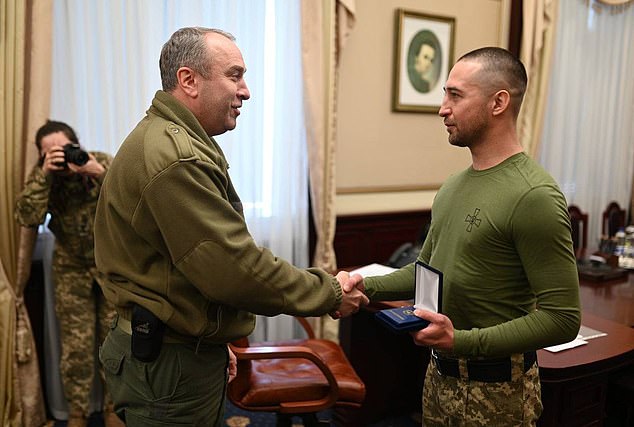 Border guard Roman Gribov right, who served on Snake Island and on the first day of Russia’s invasion, became famous for his response to an ultimatum from the Russian missile cruiser Moskva, shouting to the invaders: ‘Russian warship, go f**k yourself’. He later returned home from captivity and was awarded a medal (pictured) 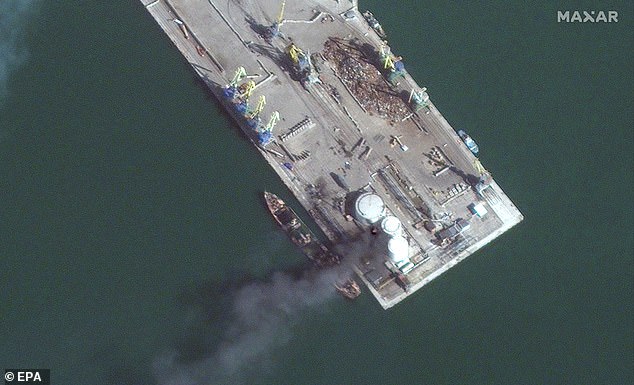 LAST MONTH: A satellite image made available by Maxar Technologies shows a burned and partially submerged Russian landing ship – the Orsk – near one of the port’s loading/unloading quays, in the southern port city of Berdyansk, Ukraine, 25 March 2022

The Moskva missile cruiser left Sevastopol, Crimea in February for the Black Sea as part of Russia’s invasion of Ukraine, launched by Vladimir Putin on February 24.

Roman and his friends had been stationed on the 40-acre Snake Island near the Ukrainian and Romanian coasts on the Black Sea, and were on the small speck of land when the Moskva arrived.

The rocky island – known as Zmiinyi Island in Ukrainian – has a marine research station and is understood to be strategically important because of its resources including petroleum.

The recording of a Naval radio channel featured a Russian officer aboard the Moskva giving an ultimatum to Ukrainian forces on the island to surrender, or face being annihilated by the warship’s missiles. 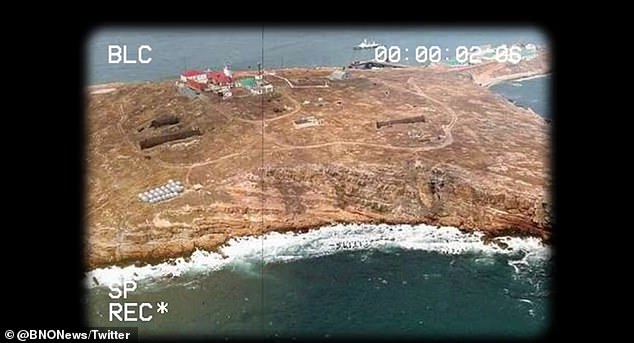 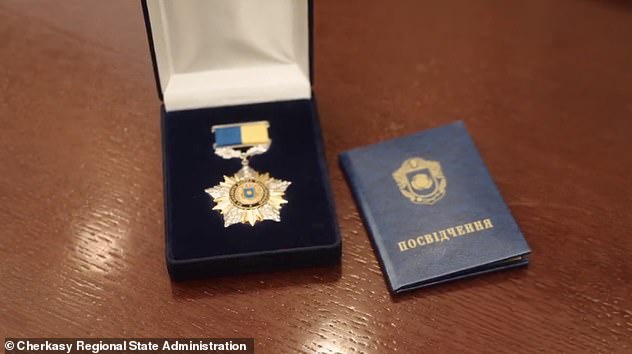 A civil medal presented to Gribov by Igor Taburets, the head of Cherkasy’s regional administration

After a short period of silence, Roman is heard asking a colleague, ‘Well this is it, should I tell him to go fuck himself?’ Another voice said, ‘Just in case…’

The volume was turned up as Roman responded: ‘Russian warship, go f**k yourself.’

His words came to epitomise the David v Goliath spirit that has marked Ukraine’s spirited resistance against the Russian war machine. Roman’s pugnacious message even prompted a patriotic poster campaign across the nation.

A civilian ship called ‘Sapphire’ was sent to Snake Island to check on casualties after the island was seized by the Russians, but the crew also ended up being captured.

They held for a month in a secret jail in Russia where Roman  lost 22 pounds and was ‘degraded’, but he later insisted he is ‘not a hero’.