Night is falling and the air is cooling. I’ve been walking in the hills in spring sunshine. So after some open-mouthed stargazing, I’ve taken root in a venerable Andalucian inn, El Padrino, with roof-beams of smoke-black sweet chestnut and a jolly barmaid who speaks not a word of English. Good for her.

It’s time to pull my upright wooden chair close to the open fire, glass of rioja in hand. This fireplace is colossal, I’ve seen smaller London apartments. The burning logs are whole cross-sections of tree-trunk.

Over the fire hangs a cast-iron cauldron from a long chain, disappearing up into the shadowy darkness of the chimney. It looks like it’s hung here since the year of the Armada. By my second glass, I’m wondering if Don Quixote and Sancho Panza might be dropping in later.

Spanish steps: A view of the village of Galaroza in Andalucia’s beautiful Sierra de Aracena – an area that Christopher Hart explores by foot on a walking tour with Inntravel

The French have that phrase, La France Profonde: Deep France, meaning the rural heartland, far from the smart suits, tensions and politics of Paris: the dozy, hidden corners of Normandy, or the Jura, or the Auvergne.

There’s a Deep Spain too — Espana Profunda. The little-known, tobacco-coloured hills of the Sierra de Aracena are certainly Deep Spain, light years in spirit from the gaudy Costas. 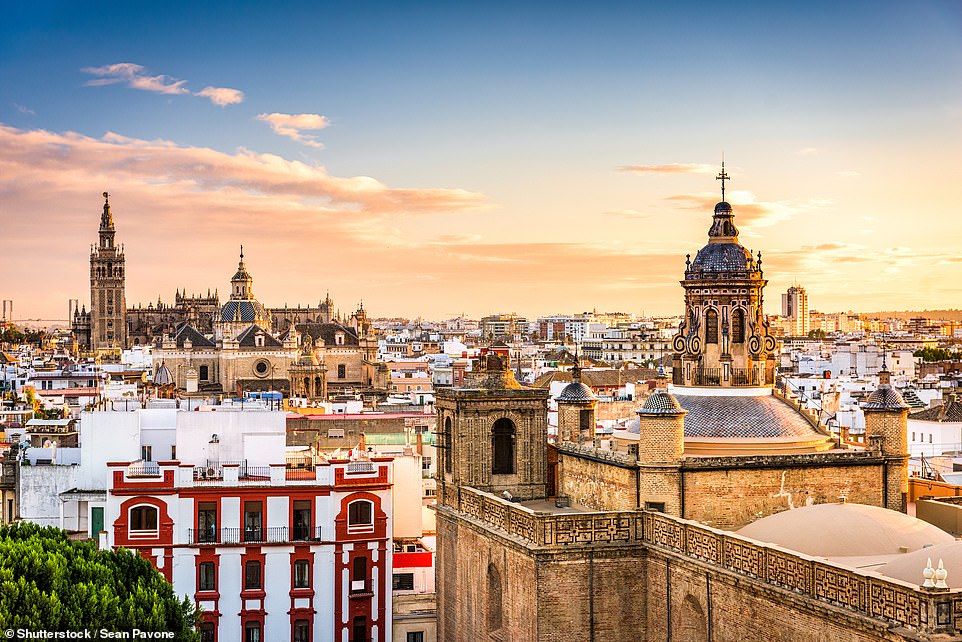 The Sierra de Aracena region is a two-hour drive out of the city of Seville, pictured above, towards the Portuguese border

They lie in the far west of Andalucia, two hours’ drive out of Seville towards the Portuguese border. A small range of the larger Sierra Morena, they’re a long sweeping sun-trap of south-facing limestone, their forested hillsides scattered with whitewashed villages.

The houses huddle together to find relief in each other’s shade through the burning summer. And their quiet lanes were clearly made for shepherds and their flocks, for drovers and donkey-carts, not V8 Range Rovers. If you drive here, drive something small, like the locals do.

The names of these villages have a music all of their own. String them together and you have a Spanish equivalent of John Betjeman’s famous evocation of Dorset: ‘Rime Intrinseca, Fontmell Magna, Sturminster Newton and Melbury Bubb…’ 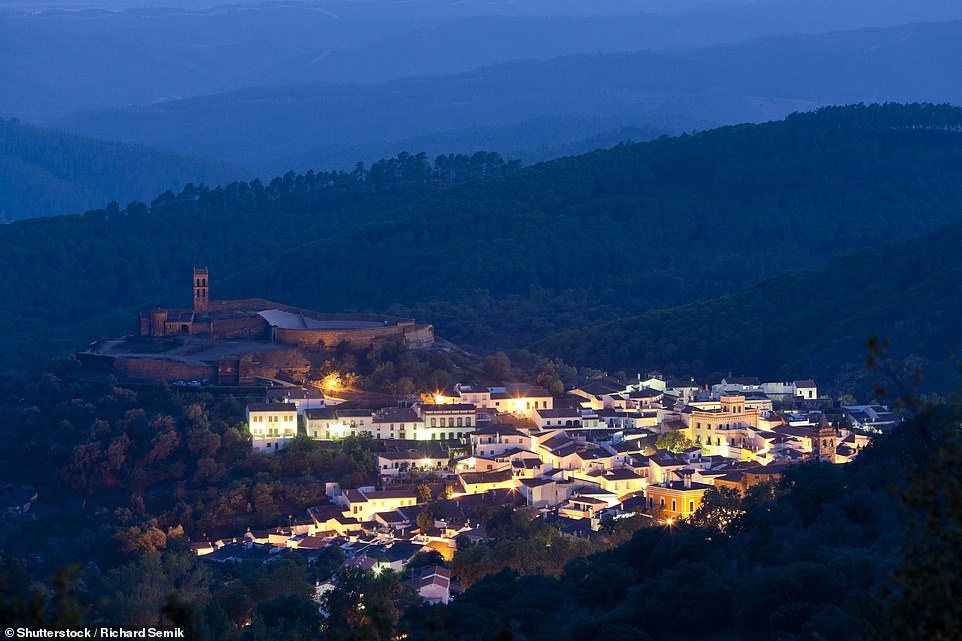 Above is a view of Almonaster La Real, one of Sierra de Aracena’s villages. ‘The names of these villages have a music all of their own,’ writes Christopher

Names that hint at Spain’s rich and contested Christian-and-Moorish past.

Loveliest village of all my walks is Linares de la Sierra . . . ‘flax-fields of the mountains.’

The Aracena seem more like hills than mountains, though, even if their highest point, Cerro de Castano, rises to 3,156ft. Their gently rolling outlines are nothing like Spain’s more epic ranges — the granite Pyrenees or the jagged Picos de Europa. With plenty of sunshine and temperatures up to 18C even in January, they’re ideal for walking just after Christmas, but you could walk here at any time of year except high summer. By February and March there’s the almond blossom in orchards grazed by merino sheep; in April and May there are wildflower meadows and butterflies dancing colourful attendance; and in autumn there’s the nut harvest, and walks through forests of stately sweet chestnut, prickly holm oak and cork oak, with its deeply wrinkled elephantine bark. 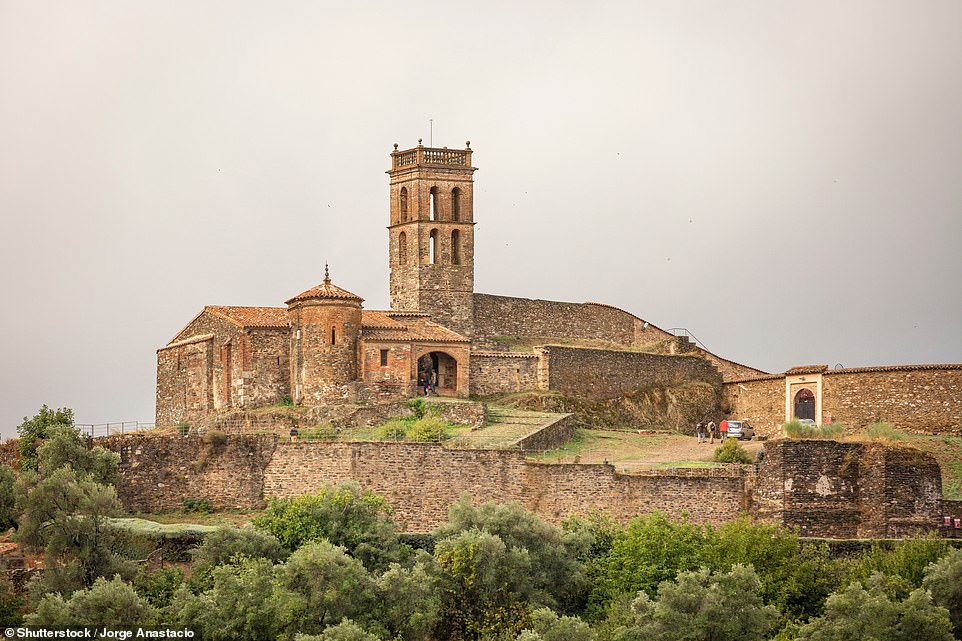 The mosque in Almonaster La Real. According to Christopher, the names of the villages in the Sierra de Aracena ‘hint at Spain’s rich and contested Christian-and-Moorish past’ 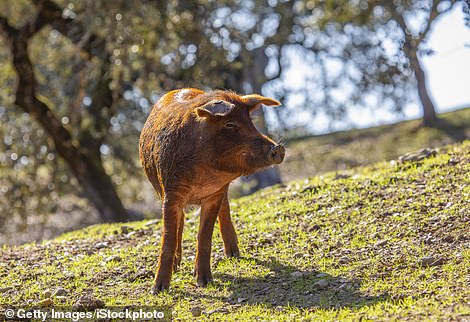 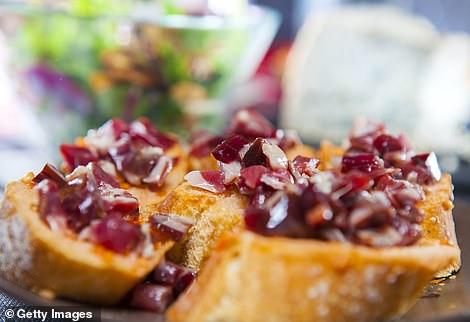 Meet the locals: Iberian pigs (pictured on the left) can be seen everywhere. ‘Free range and forest-dwelling, their lives are as different as could be imagined from the horrors of industrial-scale, factory-farmed pork,’ writes Christopher. The picture on the right shows the world famous Jamon Iberico, which Christopher describes as ‘the finest ham in the world’

The cork bark is harvested every ten years then the tree is left quietly to recover. Relations here between locals and their beloved landscape feel natural, knowledgeable and sustainable at every level.

Nowhere is this more true than in what becomes of all those countless tons of plump, shiny acorns that litter the dry forest floor.

They turn into the finest ham in the world, thanks to the healthy appetites of the small black Iberian pigs that you see everywhere from October onwards, truffling and guzzling beneath the majestic trees.

Bristly and boar-like, but not aggressive, they are in fact so closely related to the wild boar round about that the forest enclosures have to be firmly fenced to prevent any little porcine romances from blossoming and diluting the breed. 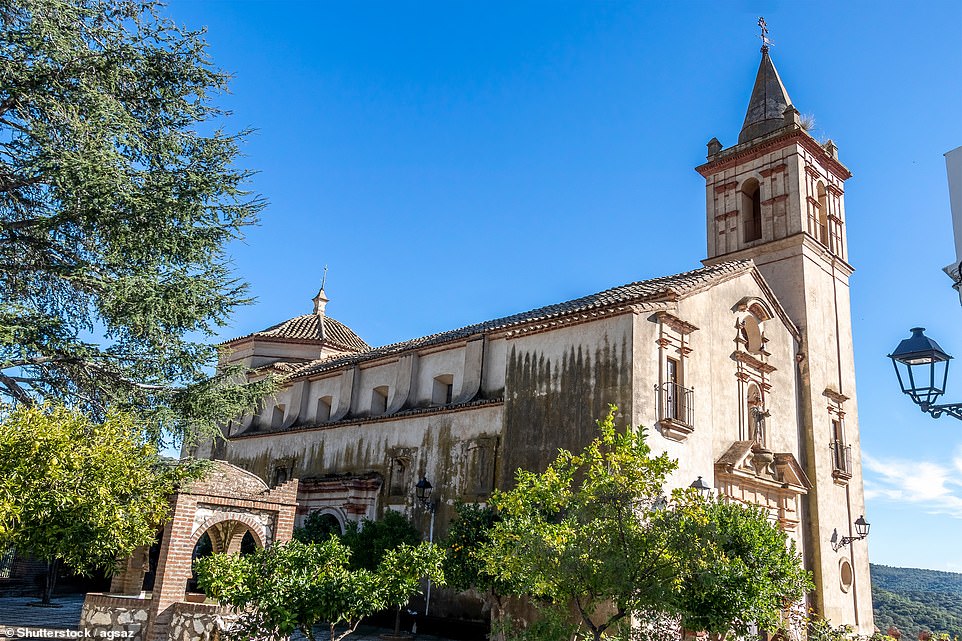 Christopher writes: ‘Loveliest village of all my walks is Linares de la Sierra.’ Above is the village’s San Juan Bautista Church

SIX OF THE BEST SPANISH HIKES

There are many paths leading to the the shrine of St James, where pilgrims have flocked since the 9th century.

Some come from Portugal, others across the north of Spain, or you could try the 60-70 miles from La Coruna or Ferrol, both known as the English Camino (caminoways.com). 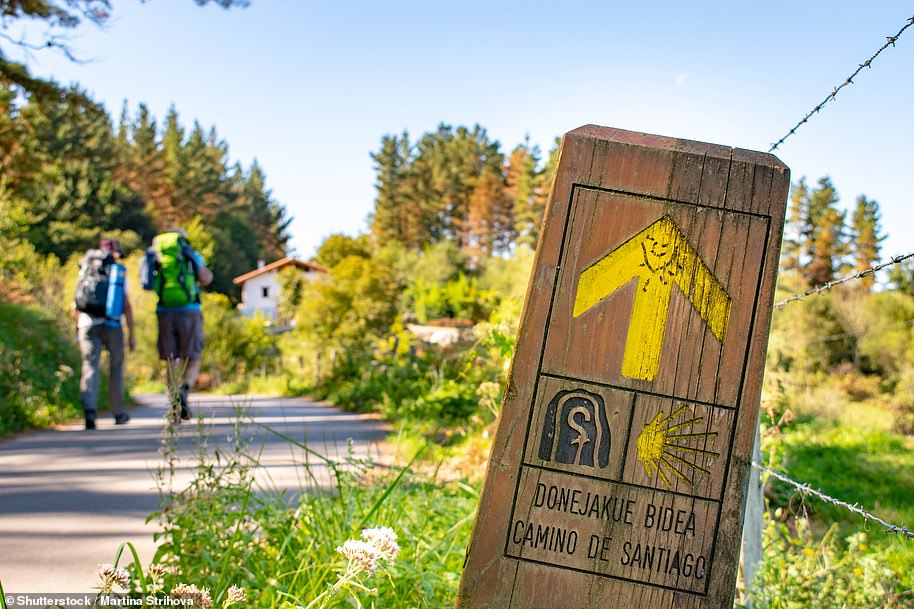 Spain’s most famous hike is the Camino de Santiago pilgrim route, pictured above

Covering 116 miles, the Camí de Cavalls trail skirts the coast of this charming Balearic island, which is home to 220 species of birds and more than 1,000 plants.

Most sections are rated easy, but there are some tougher parts — especially the seven-mile stretch through Cala Pregonda (descobreixmenorca.com).

The Rice Trail in Albufera Natural Park is ten miles from the city of València with leisurely walks between 30,000 hectares of paddy fields where much of the rice produced for paellas in Spain is grown. It’s a lush green landscape with beaches to explore, too (visitvalencia.com). 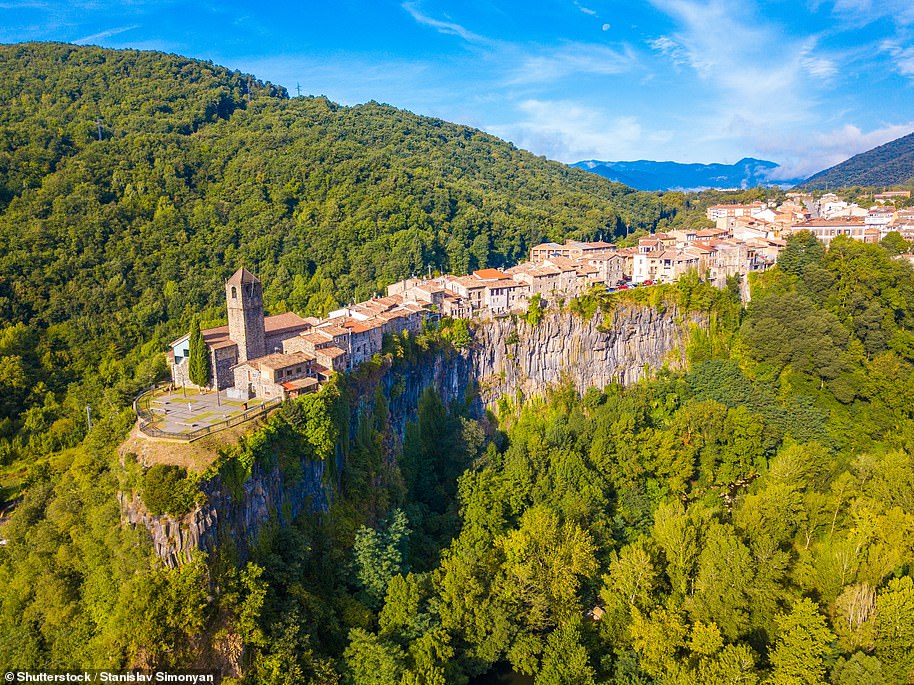 Above is picturesque Castellfollit de la Roca, a village in Catalonia’s La Garrotxa Volcanic Zone Natural Park, which has 625 miles of well-signed paths

Caminito del Rey is a six-mile hike along walkways and paths within a canyon.

The name means ‘the king’s little path’, as it was opened by King Alfonso XIII.

The Picos de Europa mountains in the Asturias region of northern of Spain offer gentle walks through valleys as well as hair-raising ascents to jagged peaks.

Some pass through gorges and tunnels, over bridges and along Roman paths. The highest point is at 2,648m (asturiaspicosdeeuropa.com).

Free range and forest-dwelling, their lives are as different as could be imagined from the horrors of industrial-scale, factory-farmed pork.

No wonder they taste so good. The making of the famous jamon iberico is as painstakingly craftsmanlike and unhurried as the best Parmesan Reggiano or Grande Marque Champagne.

To be precise, what you really want is the magnificent Jamon Iberico de Bellota, from a pig that has fed on holm oak acorns for at least three months.

These acorns are rich in oleic acid — as is olive oil — which gives the ham its incredibly healthy nutritional profile, bursting with vitamin E and omega-9, not to mention its unforgettably nutty, lingering flavour. Cured pork as a health food? In this case, yes, really. 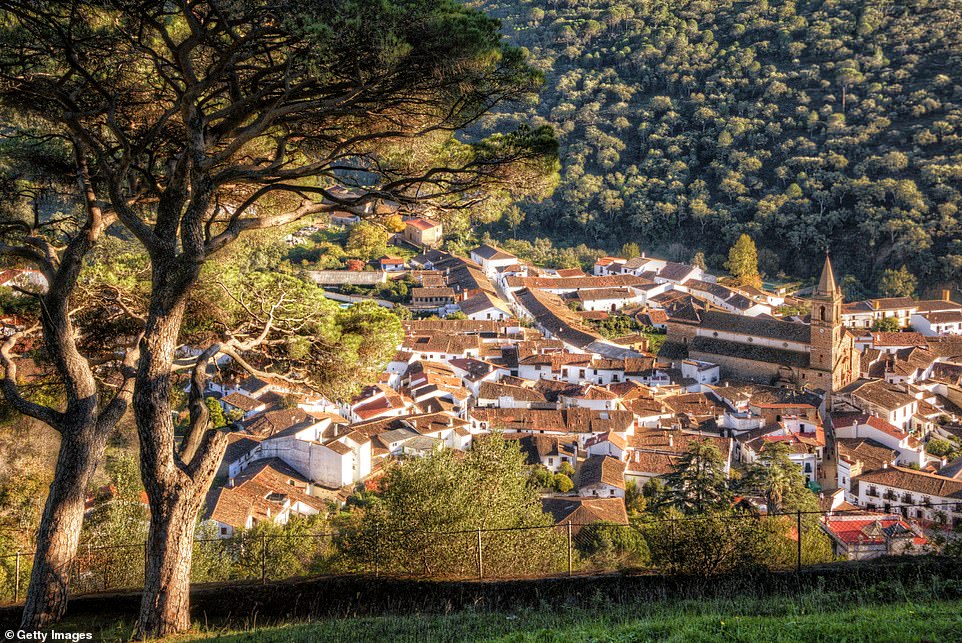 The little village of Alajar, pictured above, is one of the stops on Christopher’s tour. He describes the Sierra de Aracena as ‘scattered with whitewashed villages’

Meanwhile the forests are carefully preserved century after century for the sake of the pigs, the venerable chestnuts carefully pollarded at regular intervals, renewing them over and over.

I encounter some massive trees that must have been four or five hundred years old: like the cast-iron cauldron in the inn, they may have stood here since the Armada, now growing amazingly twisted, their huge trunks hollowing out, creating perfect nesting holes for a whole range of owls, woodpeckers, and bats.

You’ll also see rabbits and hares and lizards, scuttling under the dry leaves, and in the skies overhead, red kites, kestrels, buzzards and griffon vultures. 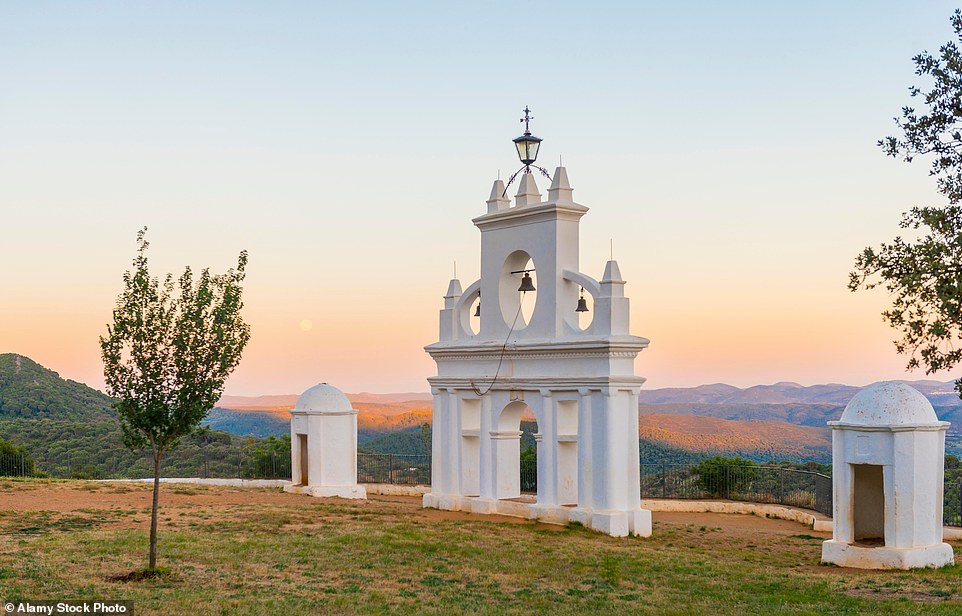 Pictured above is a pretty chapel, known as Ermita Reina de los Angeles, that can be found in Alajar 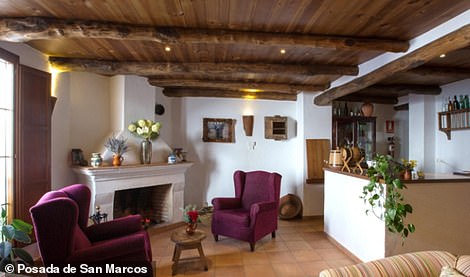 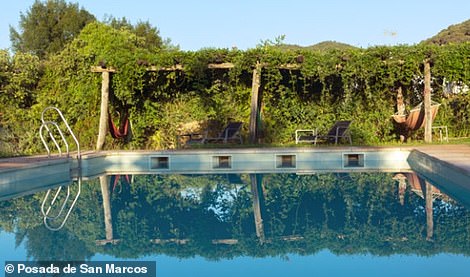 Christopher meets Angel, from Seville, and his wife Lucy, from Lancashire, who are proud owners of the excellent Posada de San Marcos in Alajar. On the left is the hotel’s lounge. The picture on the right shows the swimming pool at the Posada de San Marcos. During his stay at the hotel, Christopher tries a ‘superb’ chickpea and chorizo stew

If you are truly lucky you might spot an Iberian lynx, or a Spanish Imperial eagle, though you’ll have to keep your eyes peeled. Still, it’s good to know they’re there, and the presence of this many top predators indicates a truly healthy ecosystem.

I learn much of this via Angel, from Seville, and his wife Lucy, from Lancashire, proud owners of the excellent Posada de San Marcos, in the little village of Alajar. Both are enthusiastically knowledgeable about the wildlife, customs and food of the Aracena.

Lucy is also a superb cook: her chickpea and chorizo stew is truly an obra maestra. As well as walking, another way to explore this lovely landscape is by bicycle — there are a number of places in Seville that rent out. 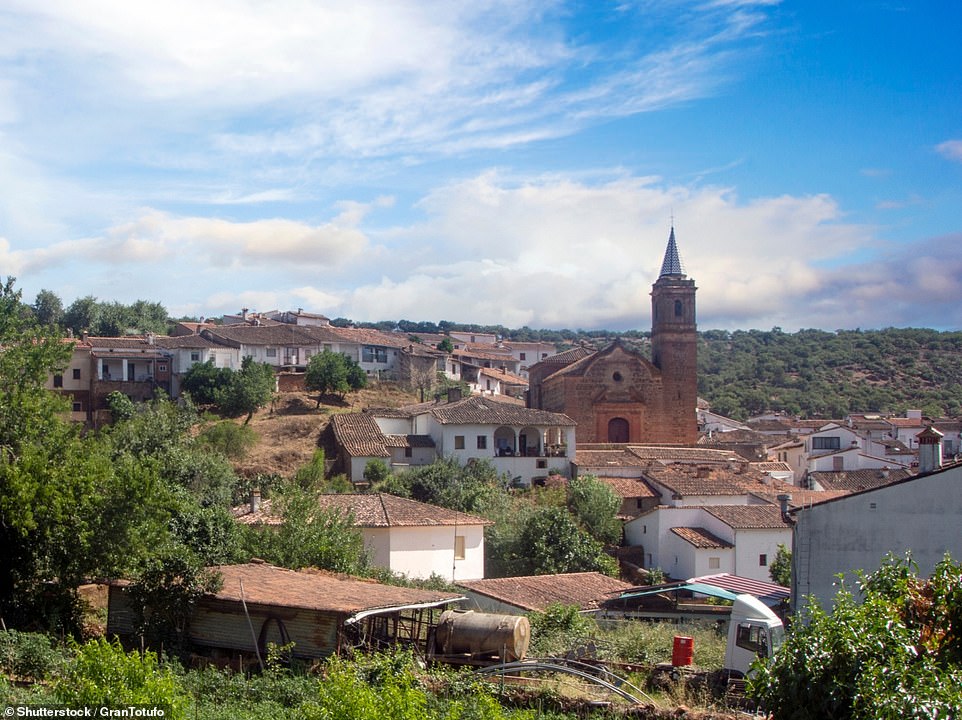 Christopher’s final destination is the village of Fuenteheridos, pictured, where he tucks into a well-deserved lunch of ham, egg and chips 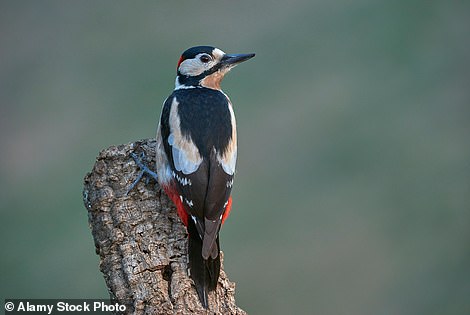 ‘I encounter some massive trees that must have been four or five hundred years old… their huge trunks hollowing out, creating perfect nesting holes for a whole range of owls, woodpeckers (such as the one pictured), and bats,’ Christopher says of his walk

I’m delighted to discover that a shop in Aracena town now does top-of-the-range electric mountain bikes for about €35 a day, which means you can really head off and explore the back country, comfortably covering 30 miles a day without having to be super-fit.

After three hours of humming gently along sandy tracks through the forest, through remote hamlets and quaint old farmyards (swerving to avoid the free-range ducks and chickens), I finally cruise into the pretty village square of Fuenteheridos for a well-deserved lunch of ham, egg and chips.

Ah, but the ham is of course jamon iberico, the chips taste like they were still potatoes growing in the rich red soil just a few hours before and the eggs have yolks as yellow as the Andalusian sun.

Christopher Hart travelled with Inntravel, which has three-night walking holidays in the Sierra de Aracena from £260pp B&B including car hire, with the option of a two-night Seville city break for £180pp B&B (inntravel.co.uk). BA (ba.com) London to Seville from £125 return. Bike hire from ebikearacena.com from £33 a day.