THE GLOBAL SMALLER COMPANIES TRUST: £758m fund that aims to deliver a mix of income and capital return for shareholders

Investment trust BMO Global Smaller Companies has just changed its name, but it is business as usual for the £758million fund that aims to deliver a mix of income and capital return for shareholders.

Run by longstanding manager Peter Ewins, the fund is now known as The Global Smaller Companies Trust. This follows the acquisition of the Bank of Montreal (BMO) European, Middle East and African investment business by Columbia Threadneedle, creating an asset manager with more than £530billion under its wing.

‘The trust’s name had to change,’ says Ewins, ‘and the board which oversees the fund felt it was best that the new name reflected exactly what I do as manager. As an investor, you get what you’re told – a trust with exposure to a broad spread of smaller companies across the globe.’

The fund has 190 holdings, 180 of which are in companies. The remaining ten stakes are in investment trusts, primarily those with exposure to Asian or emerging markets.

Its use of these funds, says Ewins, goes back a long time – to the days when the trust was part of investment group Foreign & Colonial and its assets skill set did not extend to Asia. As a result, it used specialist funds to get market exposure. ‘Maybe, this will change under Columbia Threadneedle,’ says Ewins.

Although the trust is predominantly set up to provide capital return, it has an impeccable dividend track record. Through economic and financial crises, it has managed to grow its dividend annually for the past 51 years. And while the global economic outlook is not a particularly good one, the trust will keep this record continuing.

In the trust’s financial year, that ended in April, it has so far paid a dividend of 0.57p a share, slightly up on last year’s payment of 0.55p. But last week, the trust’s board said the dividend for the full year would be 1.84p, 5.1 per cent higher than last year.

Reassuringly, the trust also has more than a year and a half’s income tucked away in reserve – money that can be used to support dividends to shareholders if the income from the portfolio comes under pressure in the future as a result of a downturn in the global economy.

Ewins says the best way he can steer the trust through the current difficult market conditions is not to take an overarching view of the world economy, but to assess the quality of individual holdings. ‘The key is to ensure the companies the fund holds have sufficient pricing power to keep their revenues and profits growing against a backdrop of rising inflation,’ he says. 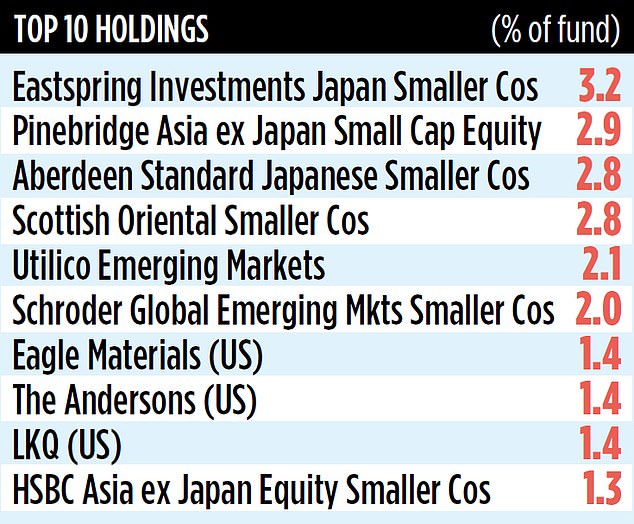 Companies that he believes should continue to grow include UK-listed Treatt, which manufactures flavours and fragrances used in consumer goods. Says Ewins: ‘It has scope to increase prices because what it supplies only represents a small part of the overall cost of a product.’

Hotel Chocolat is another UK company he likes, primarily because it operates in the luxury goods market where demand remains strong and there is scope to push up prices without curbing sales. By contrast, Swedish caravan maker Dometic is a stock he has jettisoned from the portfolio because of supply chain issues and rising costs which it has then not been able to pass on to customers.

The trust’s annual charges are 0.78 per cent, the stock market code is BKLXD97 and the ticker is GSCT. Overall returns over the past five years are modest at 10.7 per cent. One attractive feature is that the shares are trading at £1.39, below the value of the trust’s assets. In other words, they are cheap.