The coronavirus pandemic has killed at least 20,599 people worldwide since it first appeared in China in December, official figures say.

More than 447,030 confirmed cases of infection have been diagnosed in 182 countries and territories since the start of the pandemic.

The tallies, using data collected from national authorities and information from the World Health Organisation (WHO), are likely to reflect only a fraction of the actual number of infections. Many countries are now only testing cases that require hospitalisation. 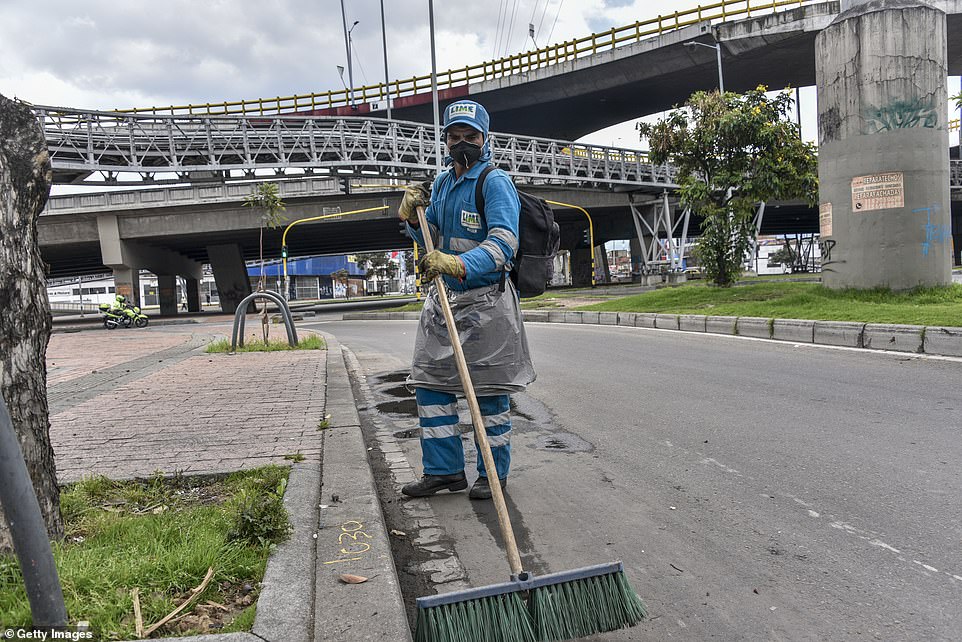 A worker sweeps the almost empty streets during the first day of national quarantine to stop spread of COVID-19 in Bogota, Colombia 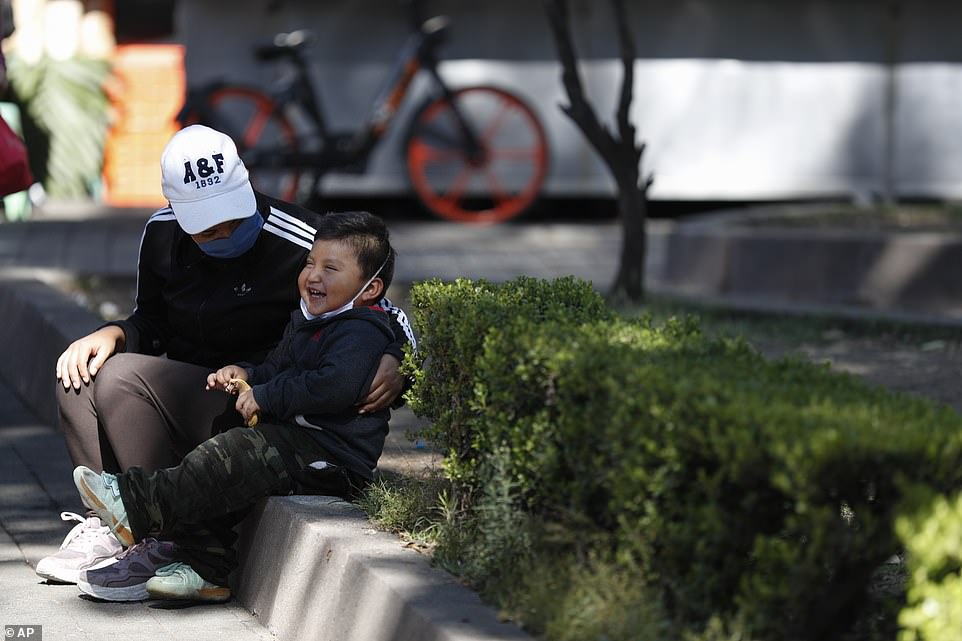 A woman, wearing a protective face mask, and her child, sit on a curb in Mexico City as the child laughs at something that was said to him 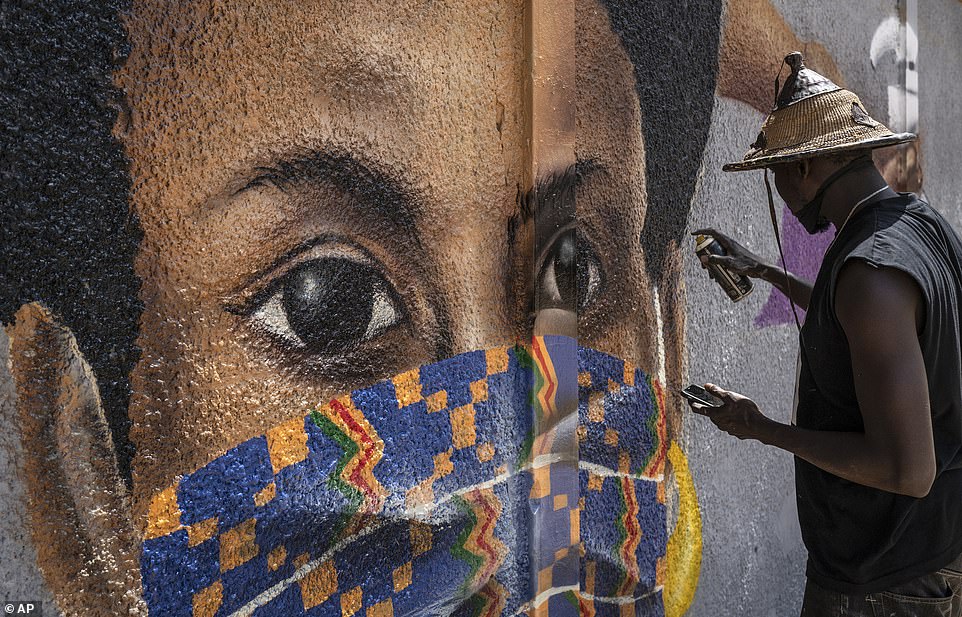 A member of the Senegalese graffiti collective ‘RBS CREW’ paints informational murals advising how to stop the spread of the coronavirus, on the wall of a high school in the Parcelles Assainies neighborhood of the capital Dakar 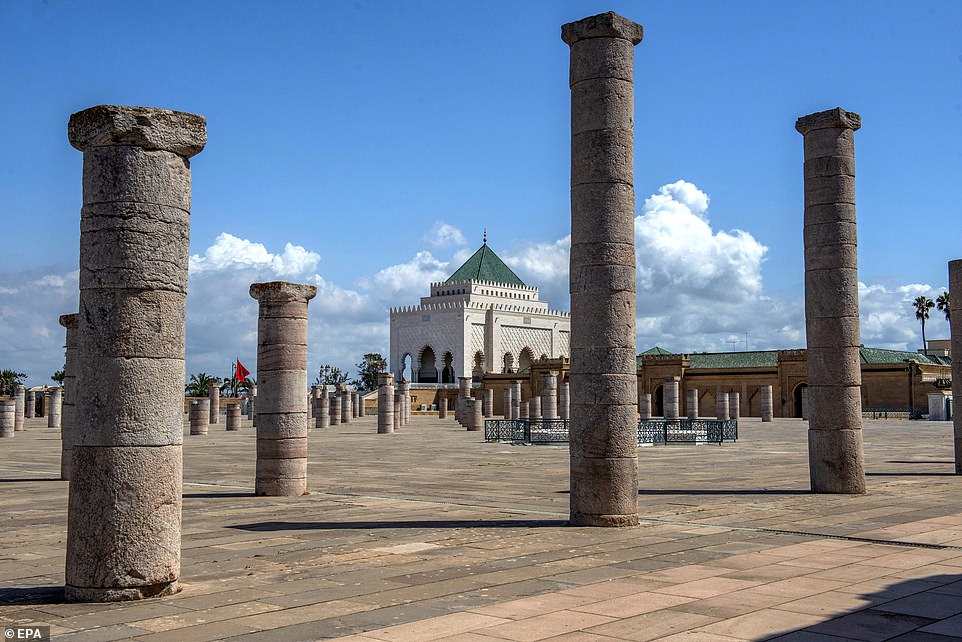 This picture shows the Mausoleum of Mohammed V, in Rabat, Morocco, which lies empty after the country declared a curfew on March 19 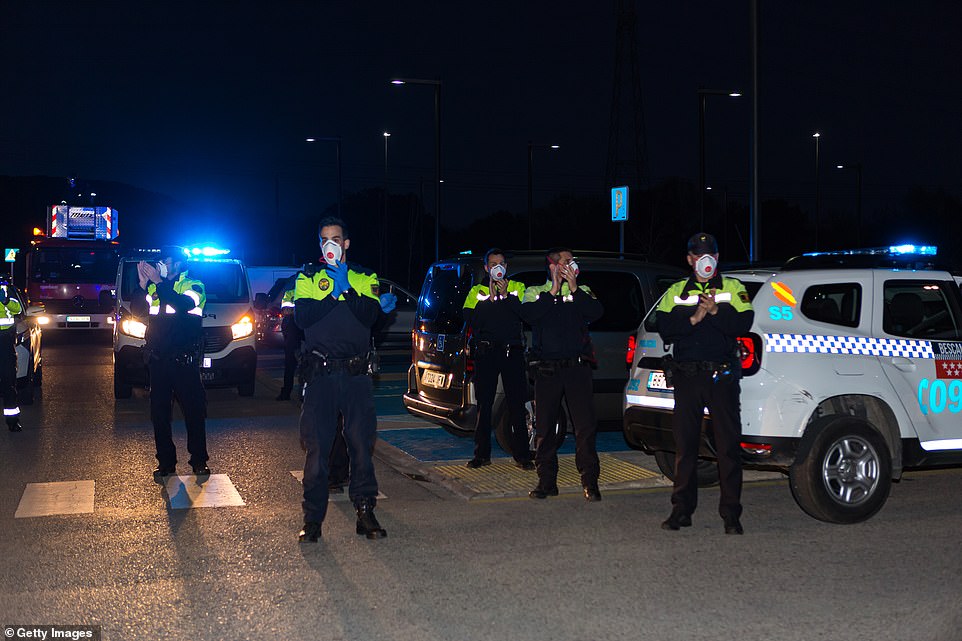 The countries that recorded the most new deaths in 24 hours were Spain with 738, Italy with 683 and France with 231.

Italy, which recorded its first death linked to the coronavirus at the end of February, now has 7,503 deaths with 74,386 cases. 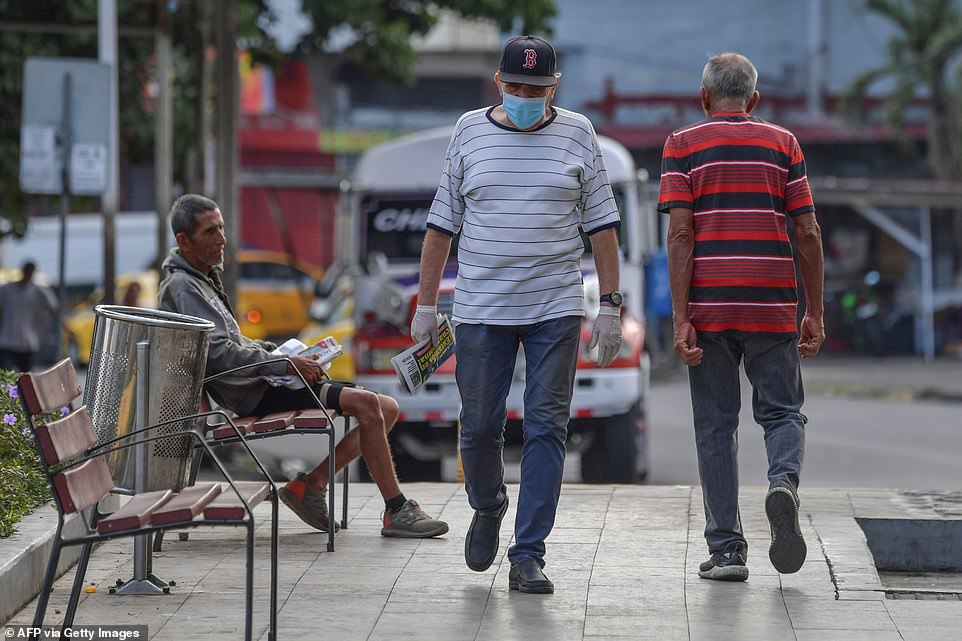 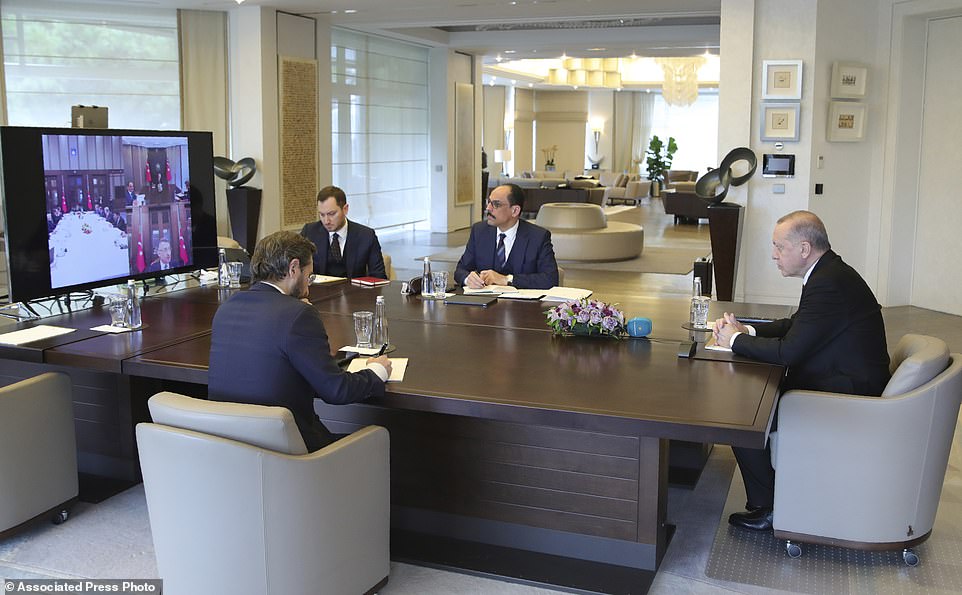 In this photo released by Turkish Presidency, President Recep Tayyip Erdogan, right, and his advisors participate in a teleconference with his ministers in Istanbul 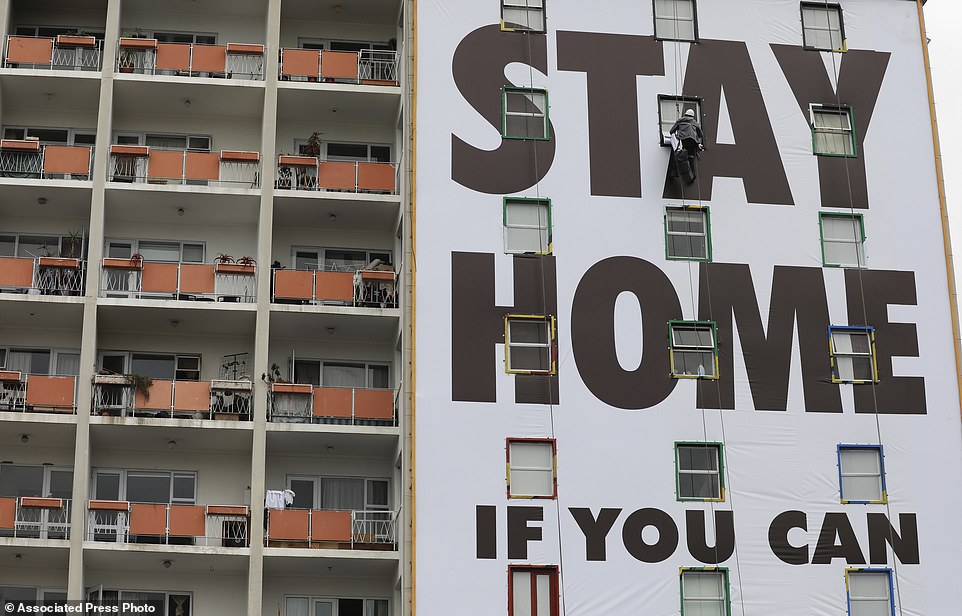 A billboard is installed on an apartment building in Cape Town, South Africa, before the country of 57million people will go into a nationwide lockdown for 21 days from Thursday 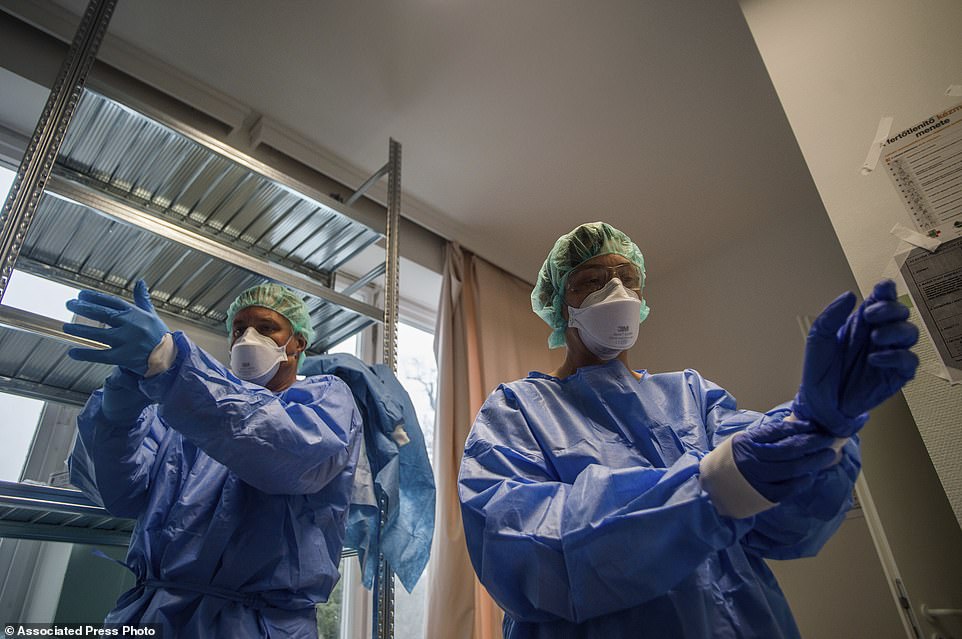 Doctors take on protective suits before they enter the isolation room at the care unit of the new COVID-19 infected patients inside the Koranyi National Institute of Pulmonology in Budapest, Hungary 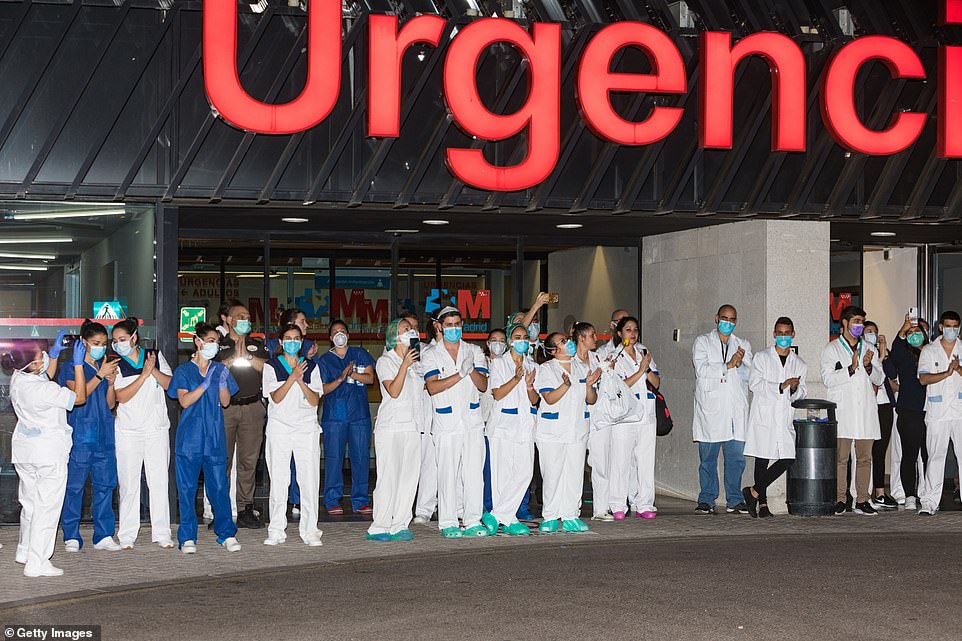 Sanitary personal of Villalba General Hospital are seen at the Emergency entrance while local police, civil guard and firefighters applaud them in Spain 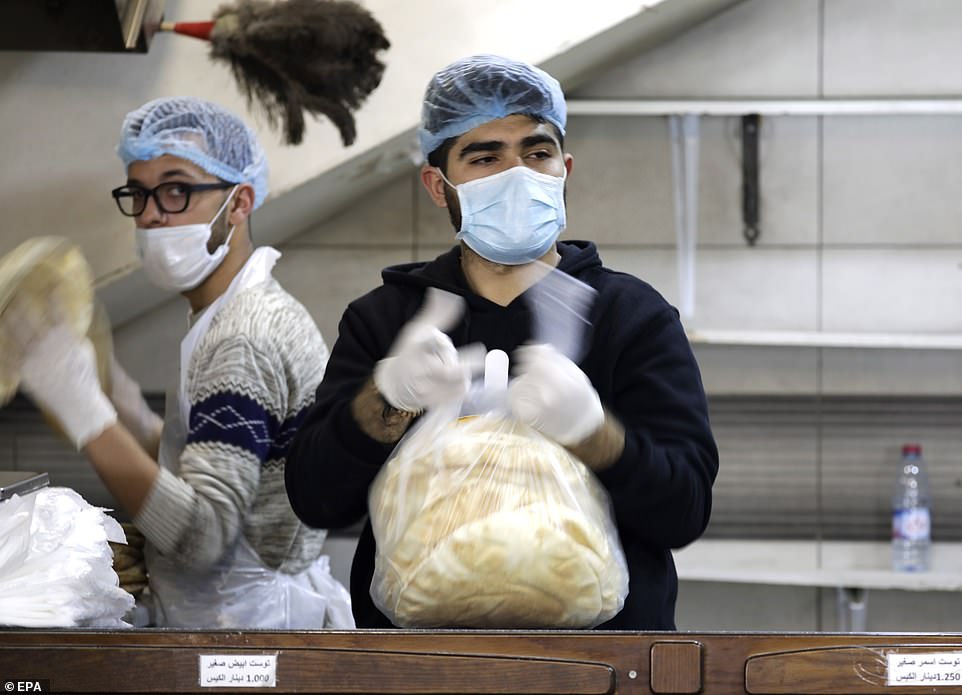 Workers prepare bags filled with bread for sale at a local bakery in Amman, Jordan, on the fifth day of full curfew in the country 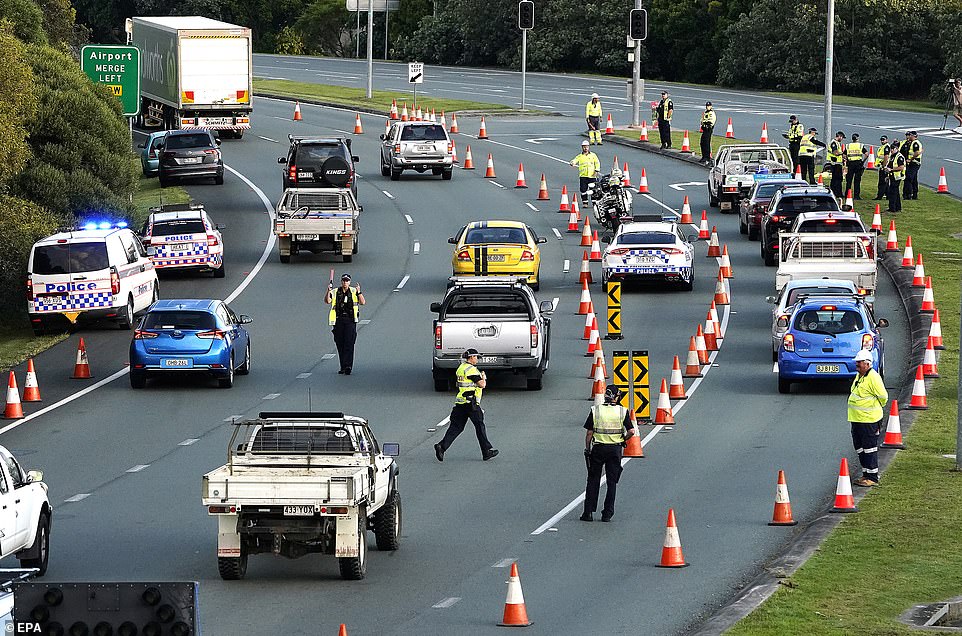 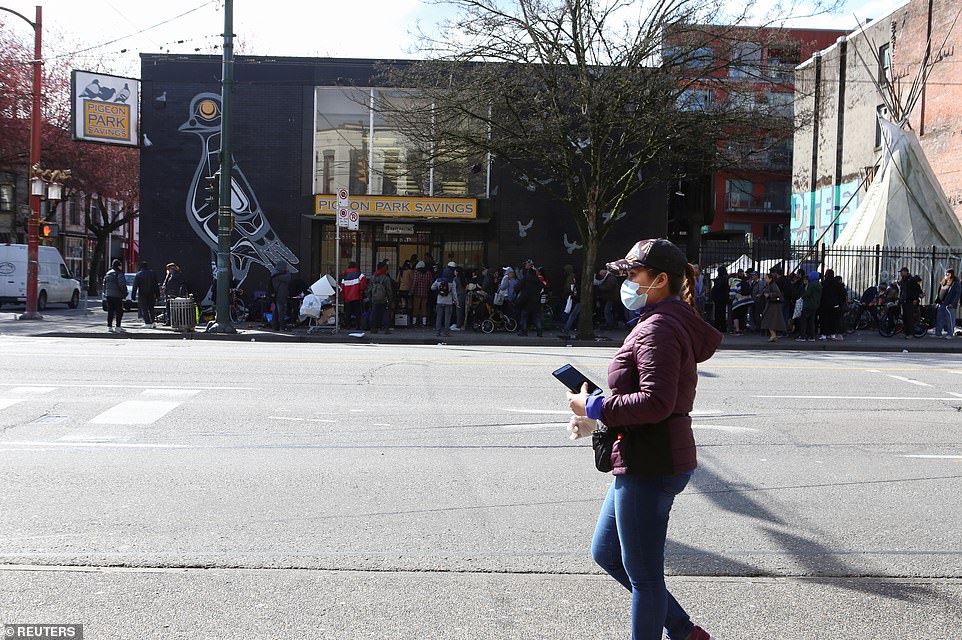 A woman wearing a protective mask walks past residents of the Downtown Eastside in British Columbia, Canada, as they gather to collect their social assistance cheques 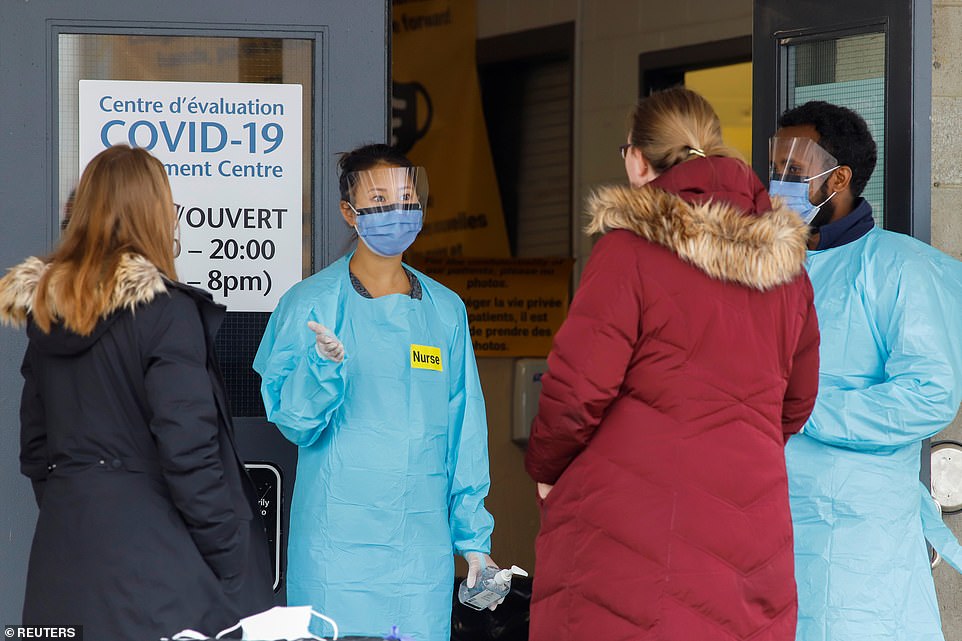 New hope for Italy as daily rate of infections and number of deaths both fall, with 7.5 per cent rise and 683 fatalities compared to 8.2 per cent and 743 dead yesterday

Italy’s coronavirus death toll has jumped by 683 to 7,503, a decline in the daily tally of fatalities following a spike yesterday.

On Tuesday 743 people died, following 602 deaths on Monday, 650 on Sunday and a record of 793 on Saturday – the highest daily figure since the deadly bug emerged in the country on February 21.

The total number of confirmed cases there has risen to 74,386 from a previous 69,176, the Civil Protection Agency said. 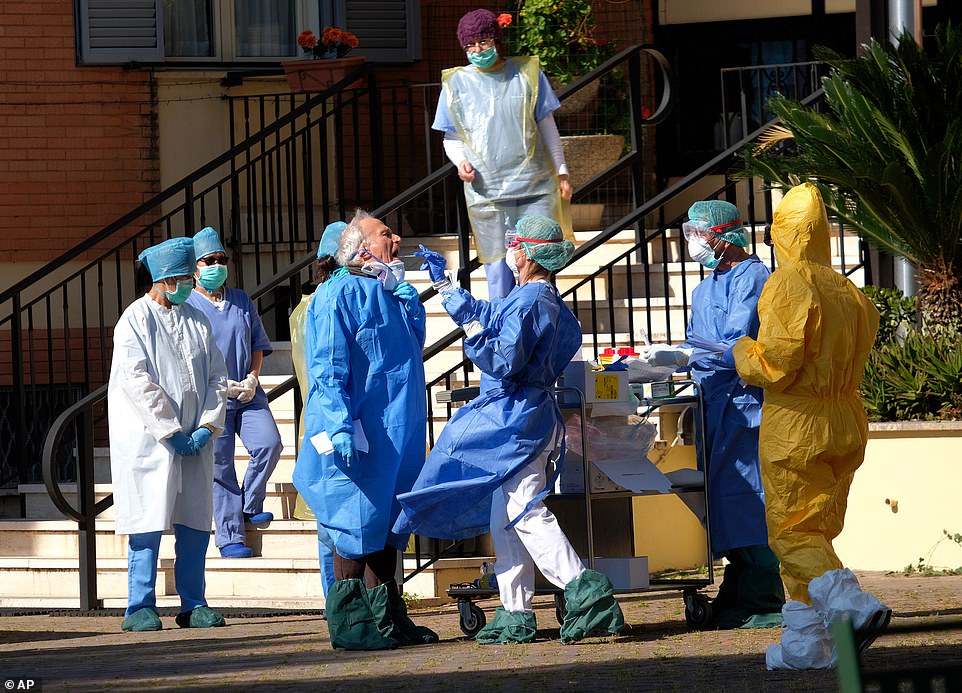 Italy’s coronavirus death toll has jumped by 683 to 7,503, a decline in the daily tally of fatalities following a spike yesterday. Pictured: At a care home in Rome 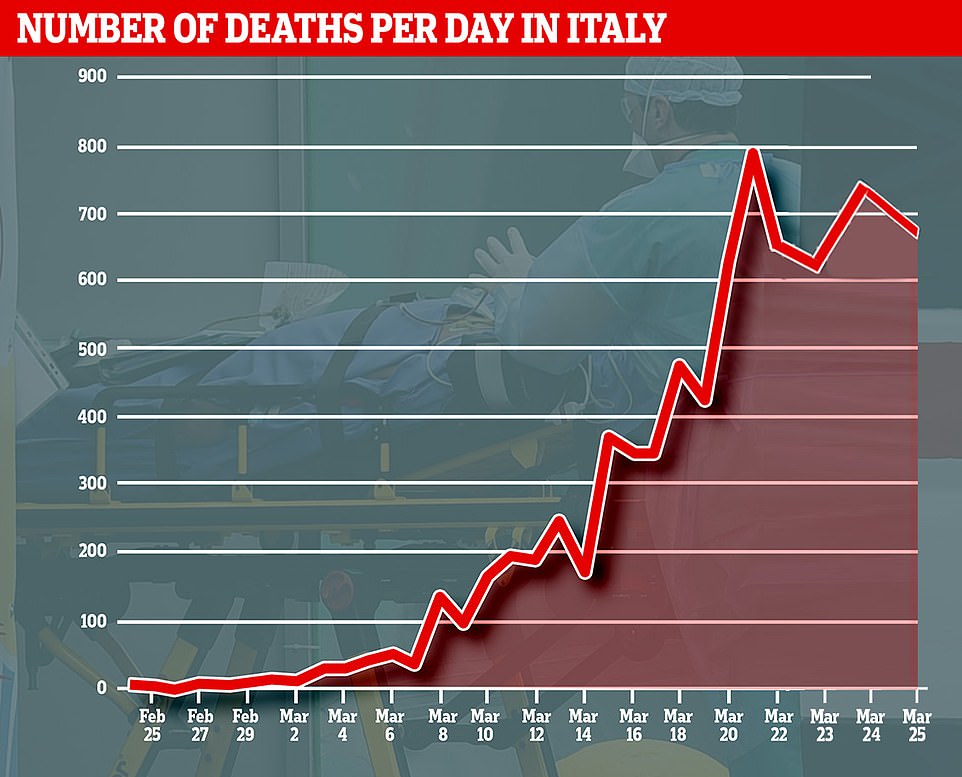 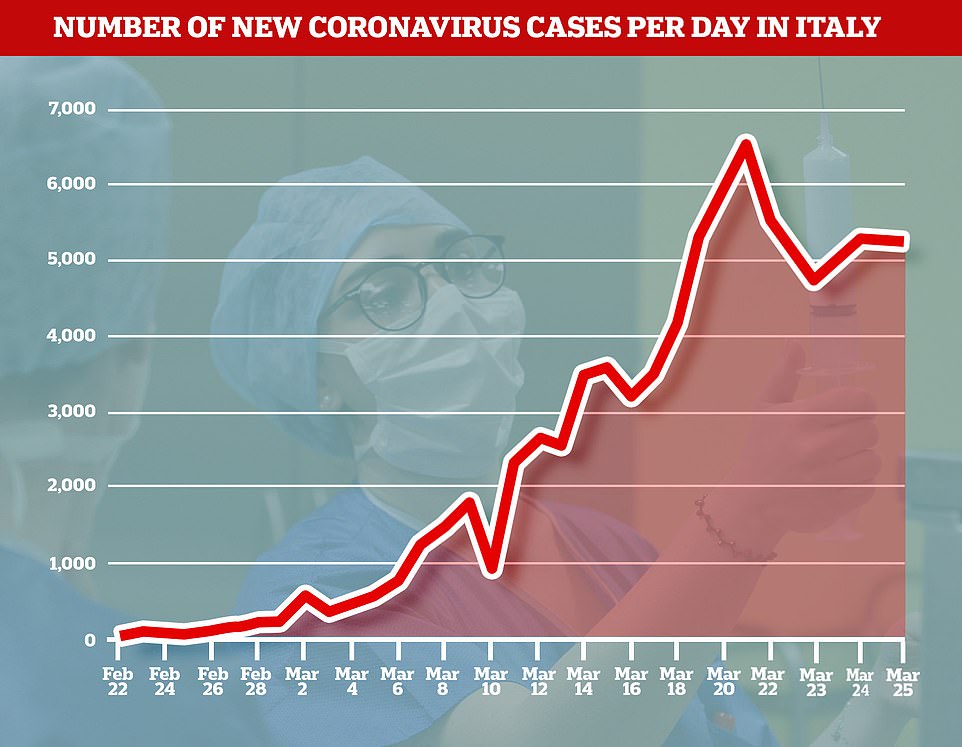 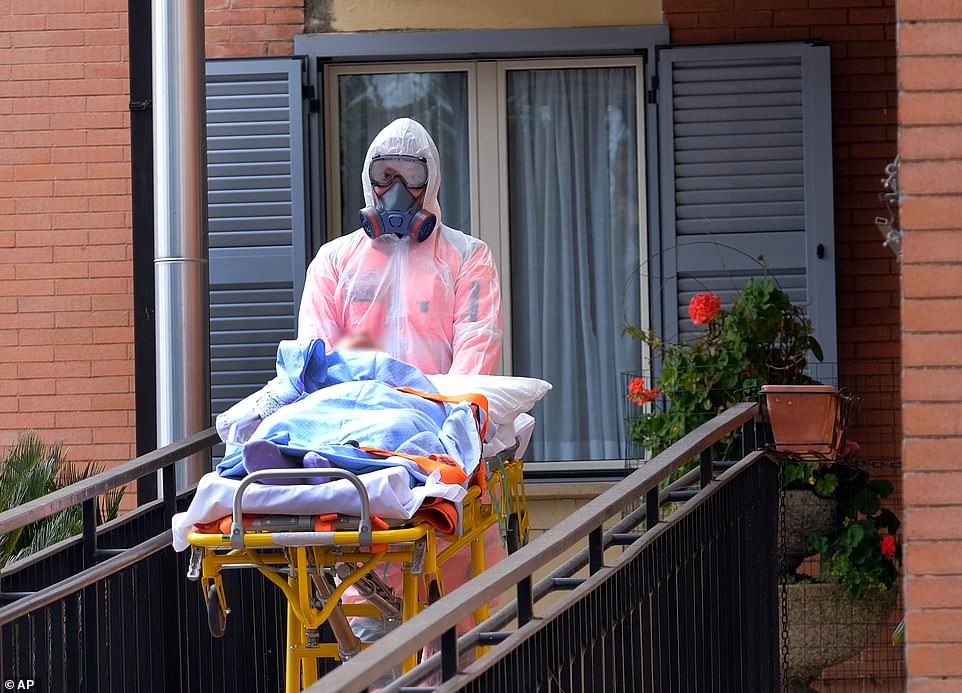 On Tuesday 743 people died, following 602 deaths on Monday, 650 on Sunday and a record of 793 on Saturday – the highest daily figure since the deadly bug emerged in the country on February 21. Pictured: Elderly hosts of the retirement home Giovanni XIII affected by coronavirus are being evacuated to hospital in Rome

The head of the agency, Angelo Borrelli, was not present at the customary news conference to illustrate the data because he came down with a fever on Wednesday.

Of those originally infected nationwide, 9,362 had fully recovered on Wednesday compared to 8,326 the day before.

The hardest-hit northern region of Lombardy reported a sharp fall in the number of deaths compared with the day before, but remained in a critical situation, with a total of 4,474 deaths and 32,346 cases.

Spain has world’s second highest tally of coronavirus deaths after seeing its biggest daily rise yet – 738 – to reach 3,434, overtaking China

The figure is now higher than the 3,285 people who have died in mainland China, where the outbreak began in late 2019. 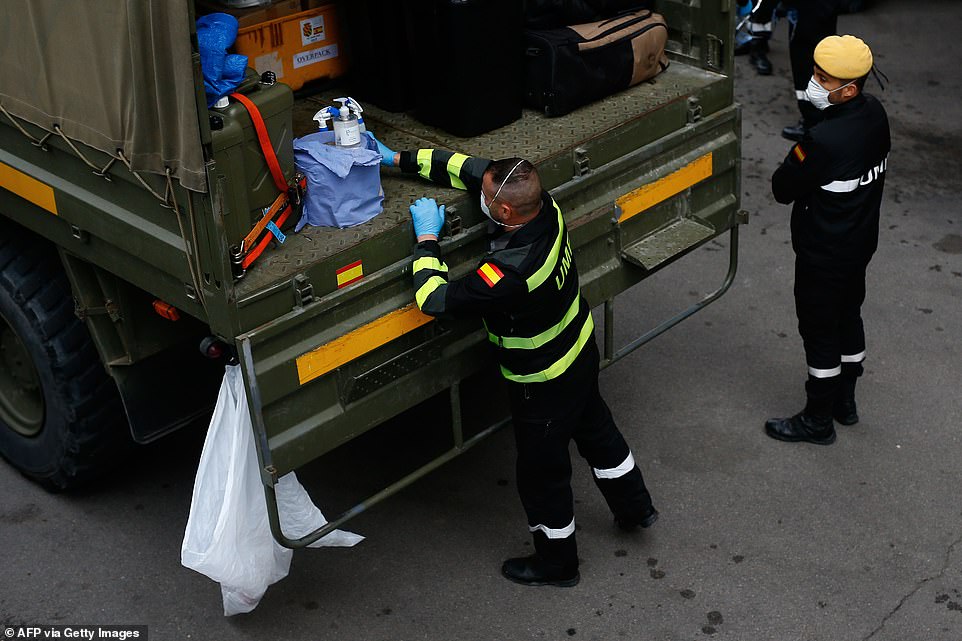 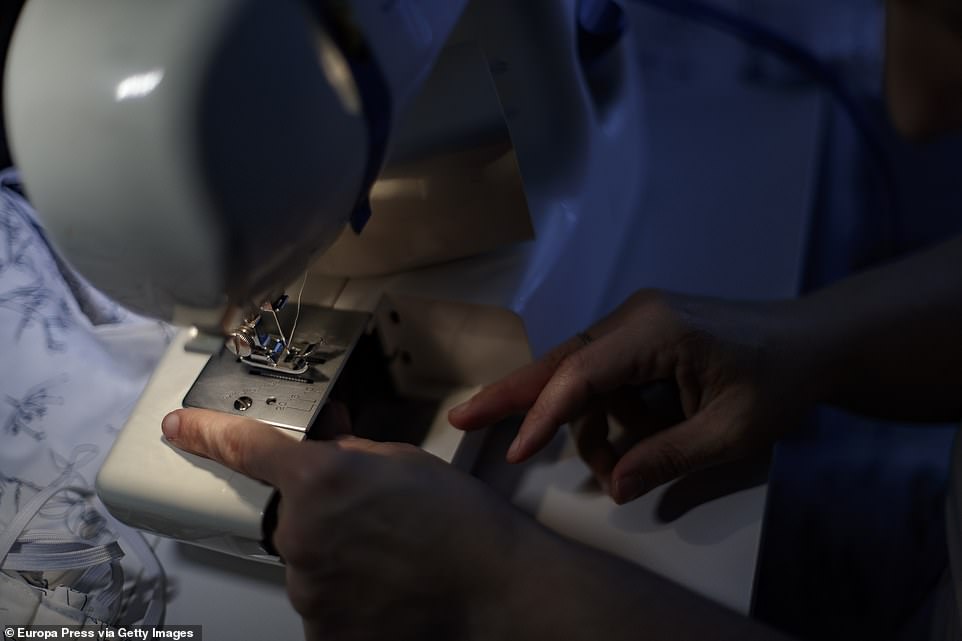 Despite an unprecedented lockdown imposed in Spain on March 14, both deaths and infections have continued to mount, with the Spanish army called in to join efforts to curb its spread.

‘We are approaching the peak,’ the health ministry’s emergencies coordinator Fernando Simon said in announcing the figures.

Health authorities are hoping it will soon become clear whether the lockdown is having the desired effect.

‘This is a very hard week because we’re in the first stages of overcoming the virus, a phase in which we are approaching the peak of the epidemic,’ health minister Salvador Illa told a televised news conference.

Spain only recorded its first virus death on March 3, but within three weeks the death toll has surged far more quickly than it did in Italy or China.