Glencore’s trading arm is on course for record profits as the giant cashes in on a surge in the price of commodities across the globe.

The FTSE 100 group’s trading business made a whopping £2.6billion in the first six months of the year – almost as much as it made in the whole of 2021, as war in Ukraine boosted earnings.

The figures are likely to turbocharge the wider company’s earnings as raw materials prices spiral.

Glencore has one of the world’s biggest broking businesses, which trades everything from oil and gas to cobalt, nickel and copper.

The sprawling division is operated by seven marketing heads, all of whom report directly to Glencore chief executive Gary Nagle. They include Alex Sanna, head of oil, and Ruan van Schalkwyk, head of coal.

Commodity traders are the middlemen of the global economy, linking the suppliers of the raw materials – often in developing countries – with consumers in wealthy nations.

BP, Shell and other resources groups have all seen their trading arms boom since the global economy began recovering from the Covid pandemic. 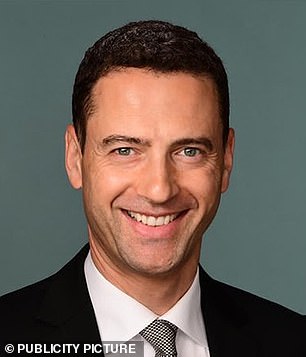 And in March Vitol, the world’s largest energy trader, clocked up record yearly profits of £3.3billion.

The bumper results of Glencore’s trading division in 2021 helped it to record profits of £16billion.

On the back of this, the company promised to hand £3billion back to investors through share buybacks and dividends.

The shares have climbed by more than 60 per cent in the last year amid the boom in commodities markets. It has also been one of the biggest beneficiaries of price volatility in the aftermath of Russia’s invasion of Ukraine.

Oil prices have climbed around 21 per cent since the outbreak of the war, while the value of industrial metals such as nickel and copper has swung wildly. 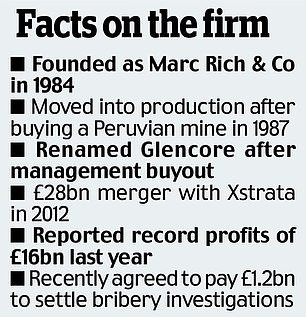 In a trading update, Glencore said its trading business had ‘successfully navigated extraordinary global challenges, being a source of continuous and reliable commodity supply to our vast customer base’.

As well as trading, Glencore is also one of the world’s biggest miners and, crucially, is one of the only remaining firms to have a coal business.

The price of coal has soared since the invasion of Ukraine.

While countries have been trying to phase out fuel to reduce the effects of climate change, fears of energy shortages have pushed some governments to keep their coal-fired power stations running despite the sites having been earmarked for closure.

The latest update comes after Glencore last month said that it expected to pay around £1.2billion to settle years-long investigations by the UK, US and Brazilian authorities following allegations of bribery, corruption and price manipulation.

The group is also facing ongoing investigations in Switzerland and the Netherlands.

Chief executive Nagle has been keen to draw a line under the cases as he tries to clean up the company’s reputation.

He took over last summer from veteran boss Ivan Glasenberg, who took Glencore public back in 2011. The company’s share price was down by 0.6 per cent, or 2.8p, to 461.2p yesterday.