Radio City Rockette Kimberly Woolen married Grammy-winning singer and musical titan Glen Campbell in 1982 and was hopelessly in love and high on life, but the Rhinestone Cowboy’s battle with drugs and alcohol had only just begun.

Decades later Kim, now Kim Campbell, could have never imagined becoming the caretaker for the country music star while he descended into his lengthy, public battle with Alzheimer’s, until his death in 2017.

Now Glen’s widow reveals the highs and heartbreaking lows of their 35 years together in her autobiography, Gentle on My Mind: In Sickness and in Health with Glen Campbell, published by Thomas Nelson on June 23.

‘Alzheimer’s comes on so gradually that it insidiously impedes your memory of your loved one in his pre-Alzheimer’s state,’ Kim writes in the heartbreaking book.

‘It was effectively robbing both of us of our memories’, Kim says, remembering the profound love they shared before his ‘war with an invisible and inaudible enemy’.

Glen Campbell’s wife Kim Campbell tells of their 35-year marriage in her new book Gentle On My Mind: In Sickness and in Health with Glen Campbell out June 23 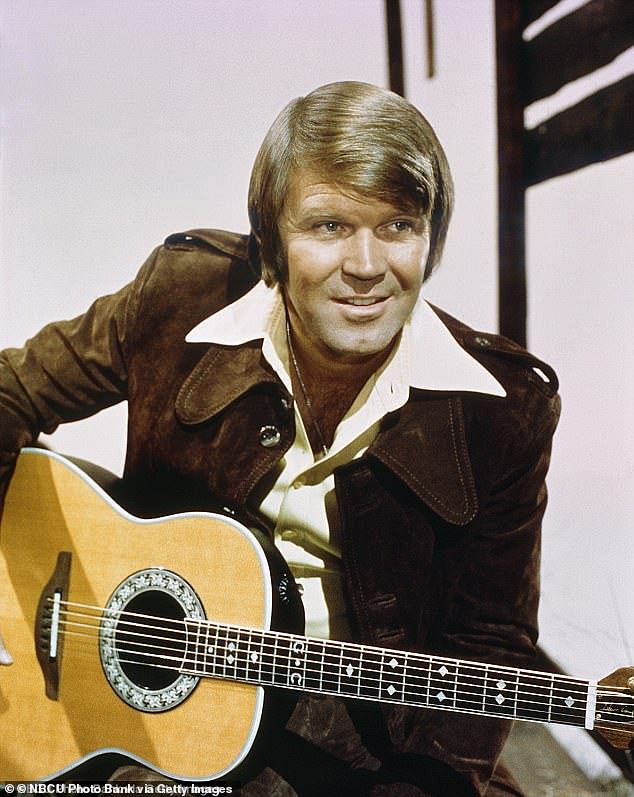 The country music star died on August 8, 2017 at age of 81, after a six- year battle with Alzheimer’s

Kim and Glen met on a blind first date to see James Taylor, which turned rocky as Glen got sloppy drunk back at his hotel wanting to ‘jump her bones’. Kim said she had her religious boundaries.

Her Prince Charming ‘turned into a big fat toad and turned vulgar,’ she writes. 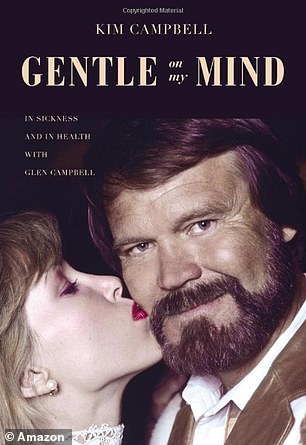 The big star, 22 years her senior, wanted to romance her with jewelry, a car, take her shopping and show her a glamorous world that she never imagined.

It was suddenly life in the fast lane of limos, flowers, fine dining and Broadway shows for the girl from Indiana who had never been west of St. Louis.

She fell hopelessly in love and then he was gone and back into the arms of country star, Tanya Tucker, drinking and drugging in a toxic affair Glen called an ‘addiction worse than cocaine’.

Kim writes that she had already put Glen on a pedestal and she spent the next three months begging God to bring him back to her.

She altered her prayer and the next day Glen called and she joined him in Tahoe where they danced their way into the bedroom.

Kim became his ‘angel’ and all was magical in their affair while he was on the road, except for the bar in the hotel room.

She writes of how he got so drunk after every show he could barely walk – quickly changing from sweet and humble to belligerent and self-centered while saying, ‘It isn’t a problem honey. I’ve got it all under control’.

Kim became caretaker for Glen with stardust in her eyes as they traveled around the world meeting famous people.

He drank wine at lunch, whiskey at dinner – and somehow excused it but it wasn’t going away.

‘Every night he drank himself unconscious,’ Kim writes.

One night he got so drunk he locked himself out on the hotel balcony naked and couldn’t open the door to get back in until she helped. Then he couldn’t make it to the bathroom in time so he peed in her suitcase.

When she asked him not to drink before a show in Vegas, he poured a beer over her head.

Asking him to consider even the idea that he had a problem sent him into a rage. 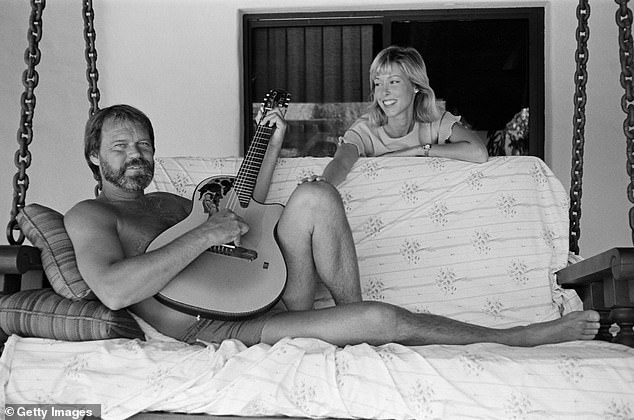 Kim writes of how she became Glen’s ‘angel’ and all was magical in their affair while he was on the road, except for the bar in the hotel room 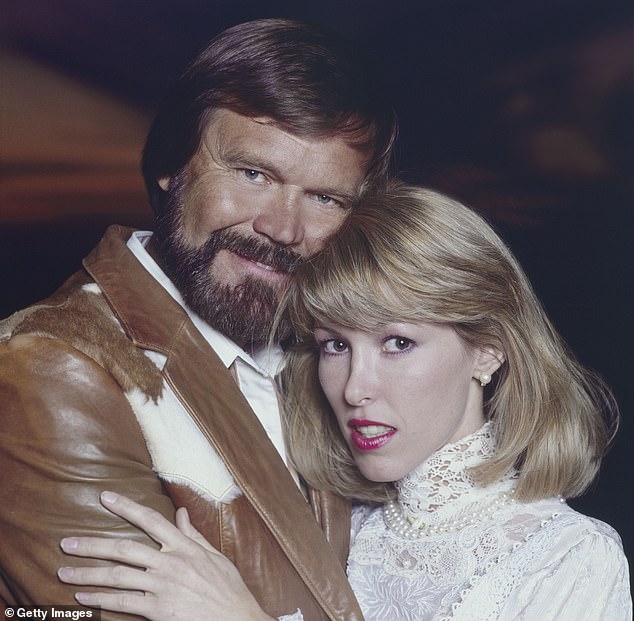 He drank wine at lunch, whiskey at dinner – and somehow excused it but it wasn’t going away. ‘Every night he drank himself unconscious,’ Kim writes 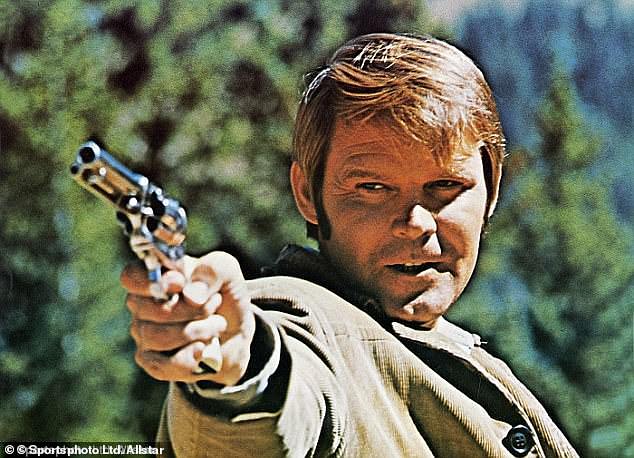 Campbell had three wives and three failed marriages before Kim. His tirades led to cocaine-fueled emotional terrorism he exercised with Kim that left her hiding and trembling under the dining room table.

She wanted to flee but also wanted to be his wife.

Now pregnant with their first child, she had to learn to deal with Glen who was one day sane, one day insane.

Drinking round the clock, rolling out of bed and onto the floor and peeing on himself didn’t even wake him up.

At point while he was in a crazed drunken rage, he pointed a gun at her.

Glen’s drinking finally stopped when Kim confronted him in a saloon, handed their baby to him and walked out.

It woke him up to the responsibilities of the father and husband he always wanted to be and he turned to his faith and promised to change.

Off he went to the Betty Ford Center to sober up. Boozing didn’t stop altogether but there was a bigger roadblock ahead.

Glen started forgetting lyrics and told Kim at one point, ‘I’m your little boy’. She realized there was an issue when Glen told her he wanted her to be his mother.

Glen became disturbed at how cars were parked in the driveway and needed them to be lined up in a specific pattern and at precise angles.

He then suspected a thief was breaking into the house and stealing his socks.

While Kim put on her makeup, he’d busy himself counting her shoes, shirts and dresses. 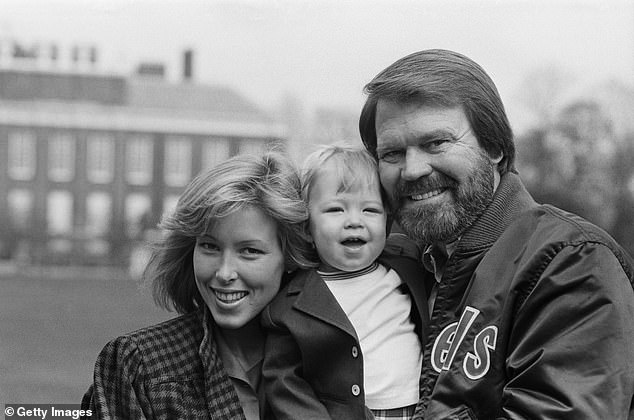 Glen’s drinking finally stopped when Kim confronted him in a saloon, handed their baby to him and walked out 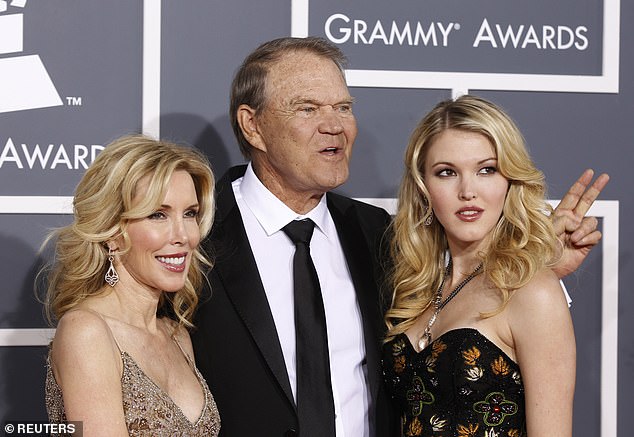 Glen is pictured with wife Kim and youngest daughter Ashley, who followed her father’s footsteps and became a country music singer 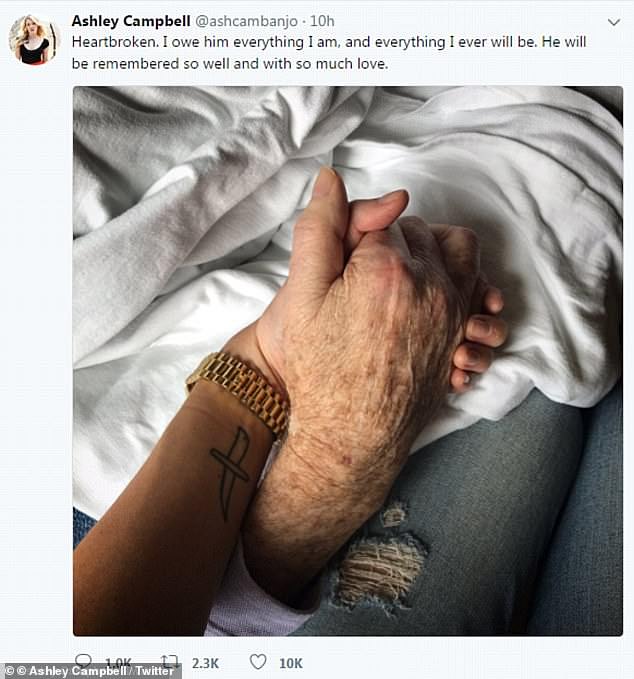 At one point Glen showed her how much toothpaste to use to get the proper foaming and that would save them a lot of money each year.

He shadowed her everywhere walking behind her.

When he forgot how to get home after going out, it was back to the doctor and Alzheimer’s was confirmed. 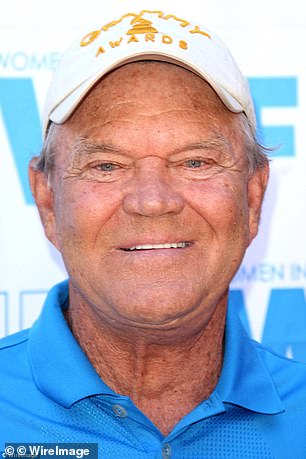 Glen Campbell was known as the grinning, high-pitched entertainer who had such hits as Rhinestone Cowboy and spanned country, pop, television and movies

Campbell had won five Grammys and sold over 50 million records worldwide as well as being a major studio musician playing guitar or singing backup for other musicians.

Now he was willing to play out his struggle in public because he loved music so much as well as playing for an audience.

It was a difficult decision for the family who agreed but also had to protect him from himself.

Campbell went on tour and sometimes forgot lyrics but then other times played and sang his hits perfectly and his fans understood.

It was a joyous moment in a sea of darkness to be back doing what he loved so much all his life.

Close friends stayed close, played golf with him and tried to keep him safe.

But acute paranoia slipped in and he was suddenly accusing his friend of stealing his golf clubs.

On the golf course, he spent his time looking for golf balls rather than playing. And then one day he turned to Kim and asked, ‘Who are you?’

‘We need to find a cure for this…so much pain should not exist in the world’, Kim writes. 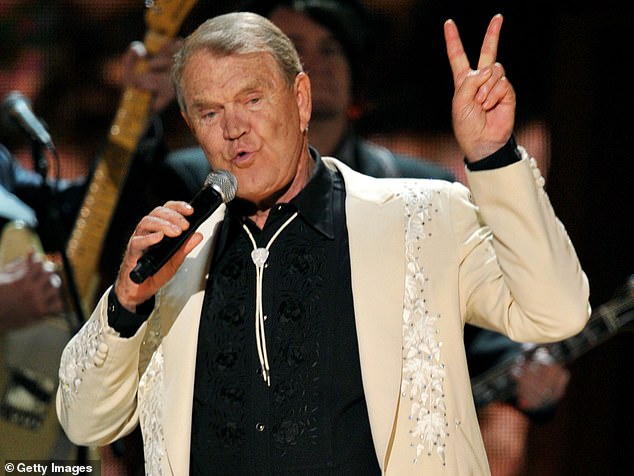 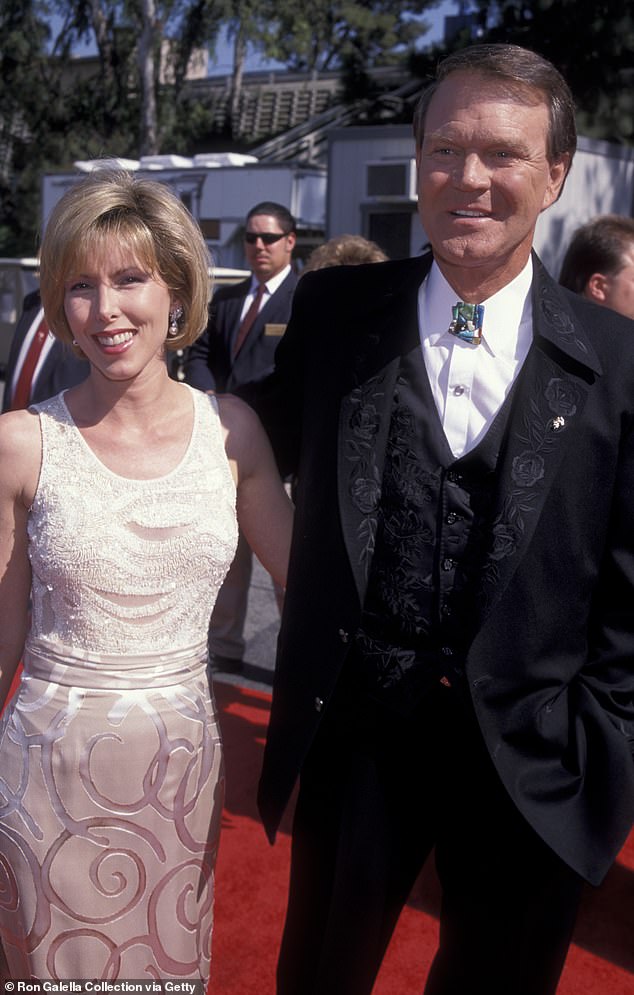 When Glen slipped into the late stages of the disease, he could no longer understand sports on television and he couldn’t read so he grew frustrated and bored.

‘Just as Glen was losing all memory I was losing memory of who he was before the disease’, she writes.

Kim thought it might help if they moved from Malibu back to Nashville, home of country music where he had so many friends.

It was a happy time for him in Music City but the disease kept progressing.

One moment he was sweet, the next combative and aggressive. When she tried to show him where the toilet was he took a swing at her. One day he picked up a large butcher knife and threateningly pointed it at Kim.

When she found him drinking milk out of the carton and offered him a glass, he tried to knee her in the stomach. But the next moment, he was all lovey dovey.

‘His diminishing ability to reason and comprehend language made any effort to correct him potentially dangerous,’ Kim explains.

The whole world was new to him every day and he fell into states of confusion when the sun went down.

The family tried taking care of him but it was impossible to sleep while watching over him in his restlessness.

Hiring in-home care was impossible because he wouldn’t understand professional helpers and was suspicious of strangers.

She tried putting him in memory care communities and care homes where he would go for only the day and then into a home full time. He enjoyed hanging out with the other residents and carried on conversations that made no sense.

Kim now felt completely alone and ‘I missed my best friend, my lover, my husband, my protector.

‘I was barely treading water in a sea of depression’, she confesses.

Yet another battle was ahead. 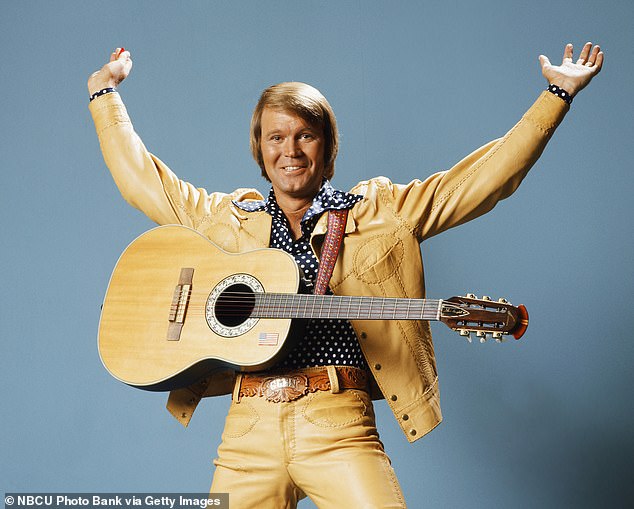 One of the five children that Glen had fathered before Kim met accused her of ‘secluding him from the family and prohibiting the family from participating in his care and/or treatment’.

All of these children had been invited to big family functions all through the years but one filed a lawsuit asking for control of all assets.

Kim says it was a money grab.

As Glen was dying, Kim was still fighting for his life.

She won conservatorship but not without complaints of elder abuse and death threats.

She tried to bring him home one more time, sleep next to him and in his arms but woke up with a blackened eye and drenched in urine.

He returned to the hospice where he took a turn for the worse in July 2017 and lost his reflex to swallow.

Doctors prescribed morphine to make him comfortable and he took his last breath in August.

The Country Music Hall of Fame in Nashville remembered Glen as a titan of American music and a humble man of love for people from every walk of life.

‘Music gave Glen and the whole world a taste of heaven on earth,’ Kim writes. ‘With all the wonders of his spirit still alive, Glen remains gentle on my mind’.