Glastonbury fans have faced many challenges over the festival’s 50-year history: Torrential rain, mud baths, navigating its ever-growing site – not to mention the digital scrum when tickets are released.

And this year’s online show was no exception – as technical glitches denied thousands access to the Live At Worthy Farm event.

The livestream from the site in Pilton, Somerset, was due to start at 7pm on Saturday but some waited for up to two hours to access the video feed of acts including Coldplay and Damon Albarn.

Angry viewers who paid £20 for a ticket were met with ‘invalid codes’ messages before co-promoter and producer Driift Live said it would provide a free link.

But some received it only ten minutes before the start of the final act, DJ Honey Dijon, at midnight. Ticket holders have now been offered refunds, and were able to access ‘encore streams’ yesterday.

Coldplay frontman Chris Martin (pictured), who has headlined the festival four times, joked about playing to ‘thousands and thousands of cows’ at the site

Festival organiser Emily Eavis apologised on Saturday night. She said organisers had put their ‘heart and soul’ into the event, adding: ‘I am so sorry about the problems with the stream tonight.

‘We will obviously make sure we show the whole film again from tomorrow too and give you the chance to catch up on any bits you missed. I really hope you can enjoy the rest of it tonight.’

Driift said it was ‘mortified’ by the ‘unacceptable’ failings and insisted that it made no financial gain from the error.

BBC newsreader Louise Minchin gave up trying to access the show. She wrote on Twitter: ‘I wasn’t expecting to be watching #Eurovision but here we go and the snacks won’t be wasted.’ 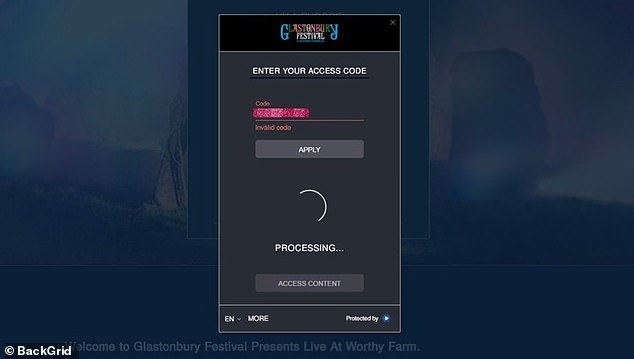 But one person said: ‘People planned a whole night around this… People who may work tomorrow. People to who a £20 spend on a luxury may not be a small thing.’

Coldplay frontman Chris Martin, who has headlined the festival four times, joked about playing to ‘thousands and thousands of cows’ at the site without its usual crowds of 200,000. He said he hoped to be reunited ‘before we are 90’.

And in true Glastonbury fashion, rain poured down. Martin said: ‘If there’s a day you didn’t want to stand in a field it’s probably today but… we’re happy to be here, so happy.’

The five-hour show, directed by Grammy-nominated Paul Dugdale, featured stars such as Idles and Jorja Smith.

It aimed to provide revenue for the festival after two years of cancellations due to the pandemic.