It’s one of the most lavish occasions in the British social calendar, and Royal Ascot racegoers certainly lived up to expectations today – arriving in a host of glamorous ensembles.

Dusting off their finery, guests pulled out all the stops as they attended the fifth and final day of the Berkshire horse racing event after 18 months of Covid restrictions, opting to wear a dazzling array of dresses, colourful face masks and over-the-top headgear.

A total of 12,000 revellers have been granted tickets to each day of Royal Ascot as part of a list of pilot events taking place before the possible lifting of all lockdown restrictions next month.

On Monday Boris Johnson announced a four-week delay to ‘Freedom Day’ – and to the ending of all social distancing measures – but any disappointment looked far from the minds of racegoers as they kicked off the festivities this morning. 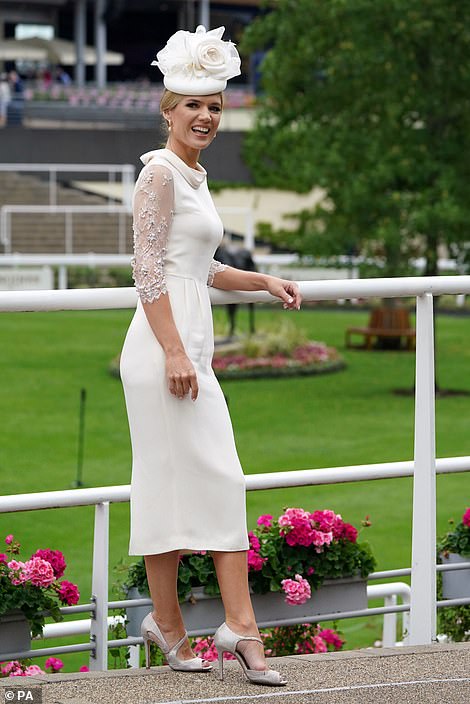 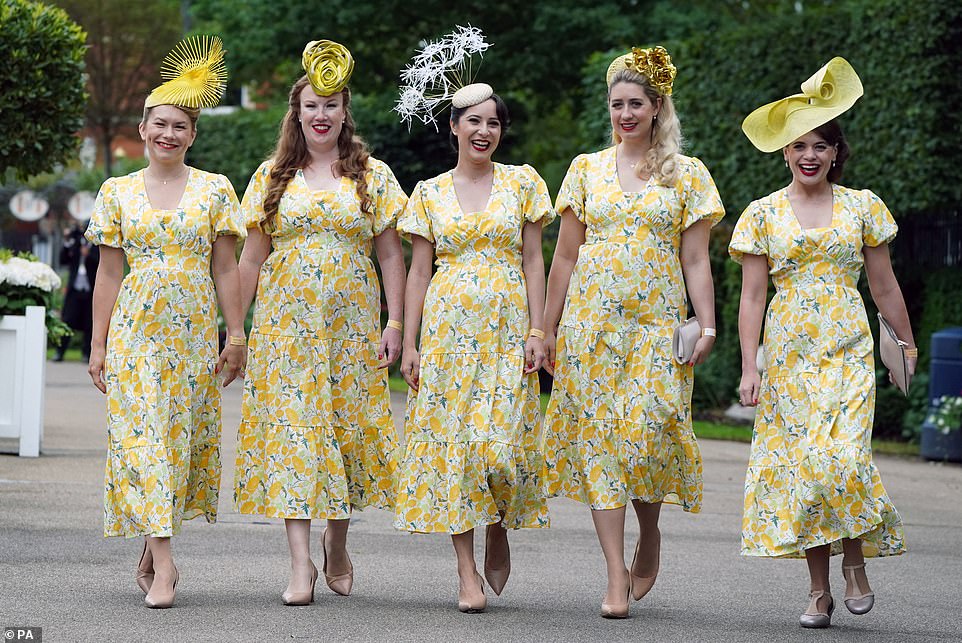 Matching! This beaming group of women sported the same lemon dress with cream heels when arriving at the event – but teamed with various attention-grabbing head pieces

Many of the glamorous racegoers in attendance opted to wear matching face masks with their vibrant ensembles – a new trend showcased by royals such as the Duchess of Cornwall earlier in the week.

Unsurprisingly, hats were the focus of many racegoers’ outfits, with flowers, feathers and beading all on display at the racecourse today.

The event comes under the Government’s Events Research Programme, and involves the expanded trialling of the NHS App and lateral flow tests to demonstrate a person’s Covid status. 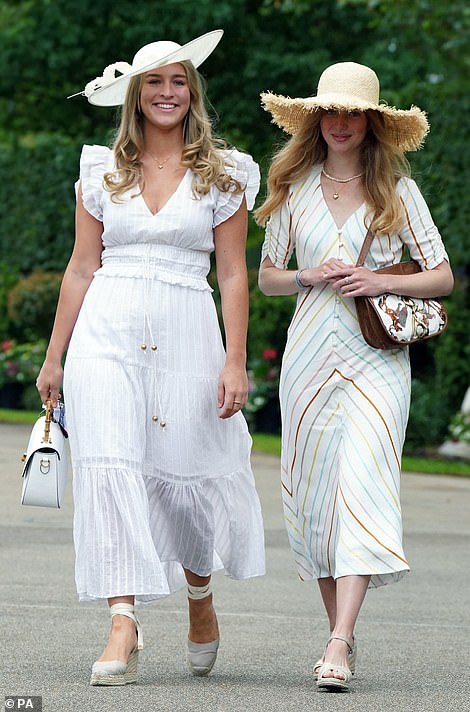 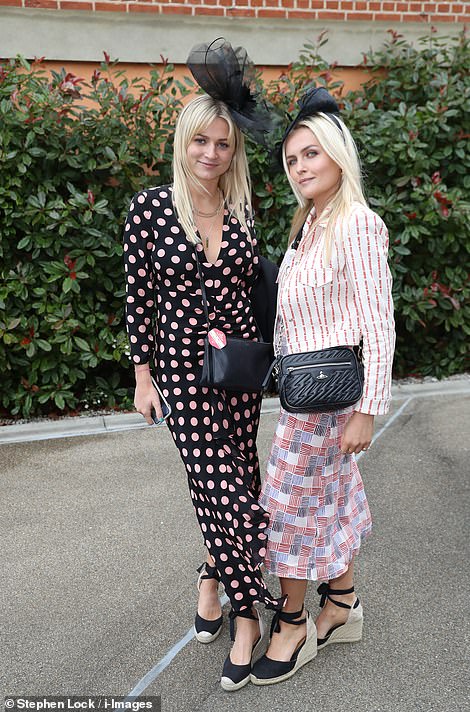 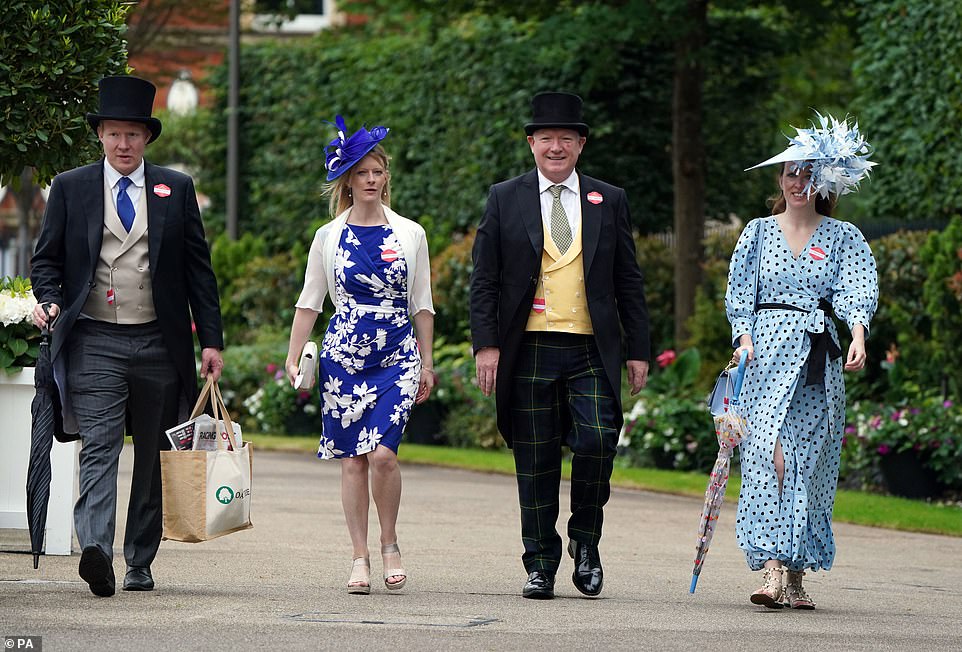 Looking good! Guests don all their finery to attend the glamorous races. A total of 12,000 revellers have been granted tickets to each day of Royal Ascot as part of a list of pilot events taking place before the possible lifting of all lockdown restrictions next month 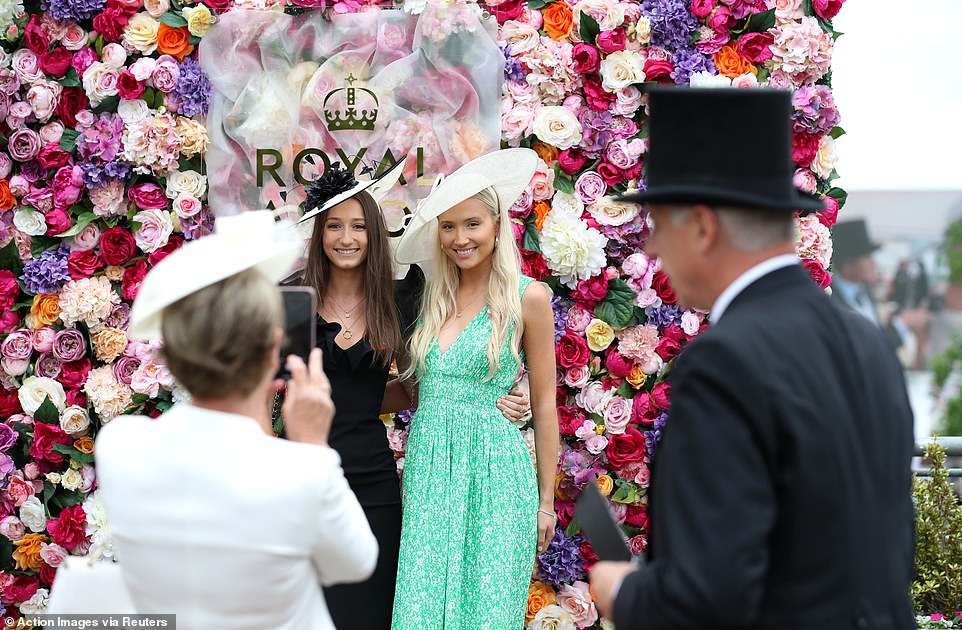 Strike a pose! Friends, dressed in fashionable outfits and eye-catching hats, stand in front of a floral board as they get their photograph taken 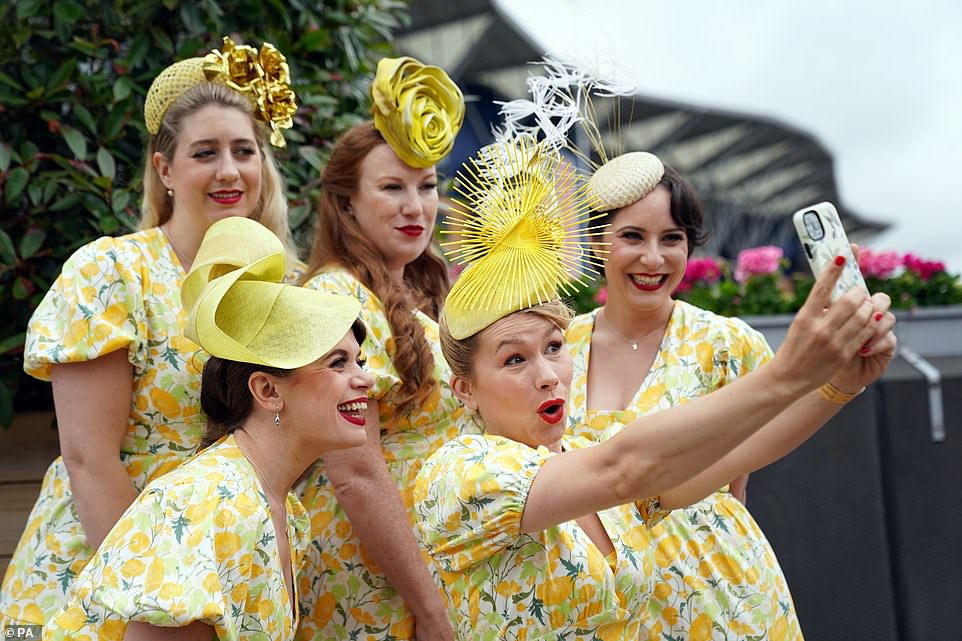 Smile! A group of women sport their best grins as they snap  a group photograph, while sporting the same floral outfit and various glamorous headgear

Earlier in the week, the Royal Family turned out in force for the first day of the five-day meet but it remains to be seen who will attend today.

One notable exception to the royal line-up was the Queen, 95, but Prince Charles and the Duchess of Cornwall were spotted taking a keen interest in the races as her horse King’s Lynn took part in the King’s Stand Stakes -finishing in seventh place.

Camilla looked animated as she clutched her racing programme in the royal box, while discussing the action with her husband.

They were joined by Mike and Zara Tindall making their first public appearance since the birth of their son Lucas in March, Princess Anne, Prince Edward and Sophie Wessex at the Berkshire racecourse for the annual family event. 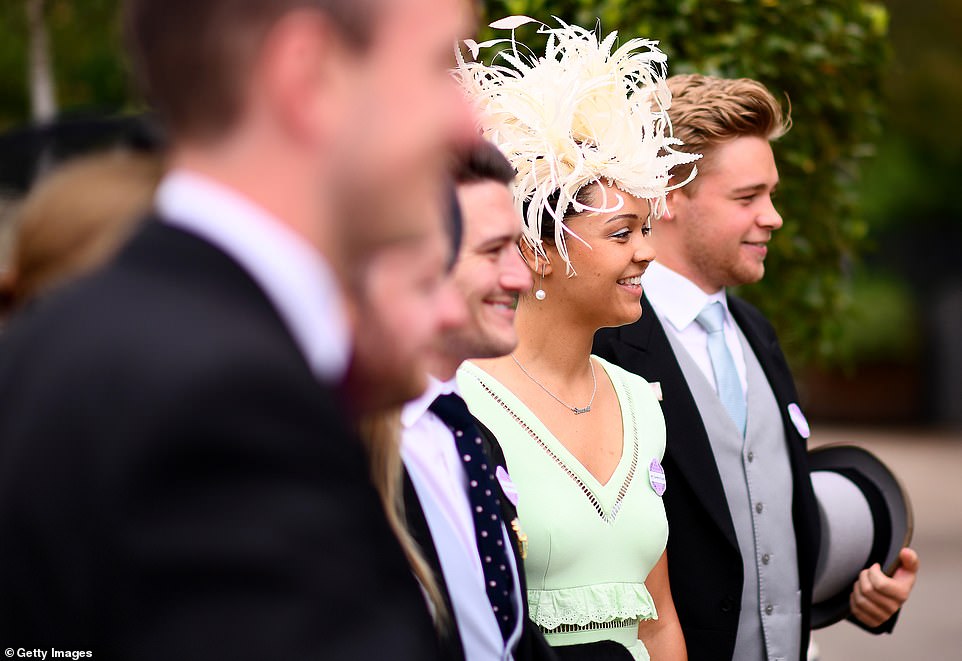 Say ‘cheese’! Excited racegoers pose for a photograph on Day Five of the Royal Ascot Meeting at Ascot Racecourse, in Berkshire 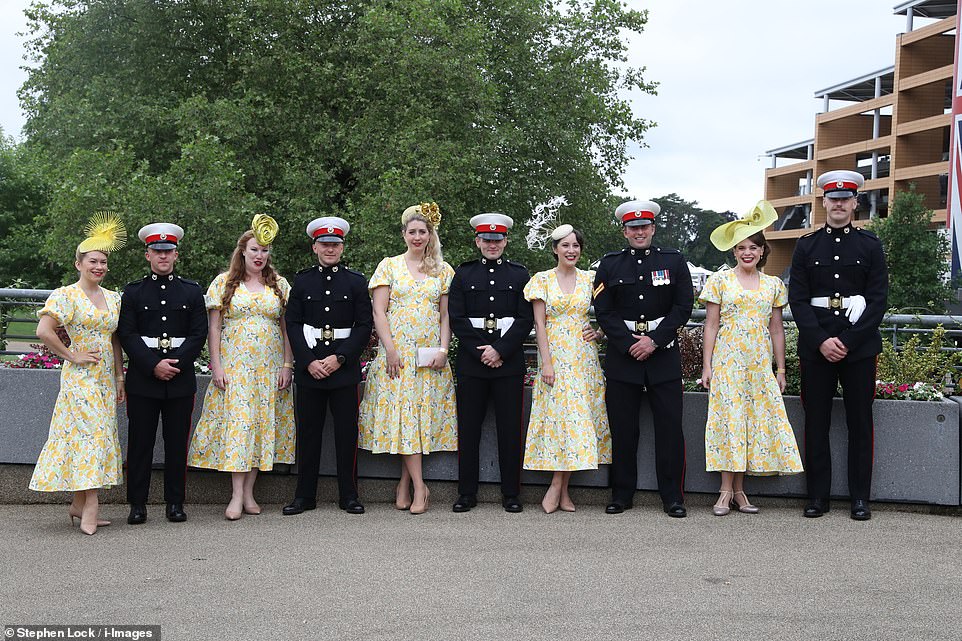 All smiles! A group of men and women strike a pose when at the races, with the ladies wearing stunning lemon dresses and the men in uniform 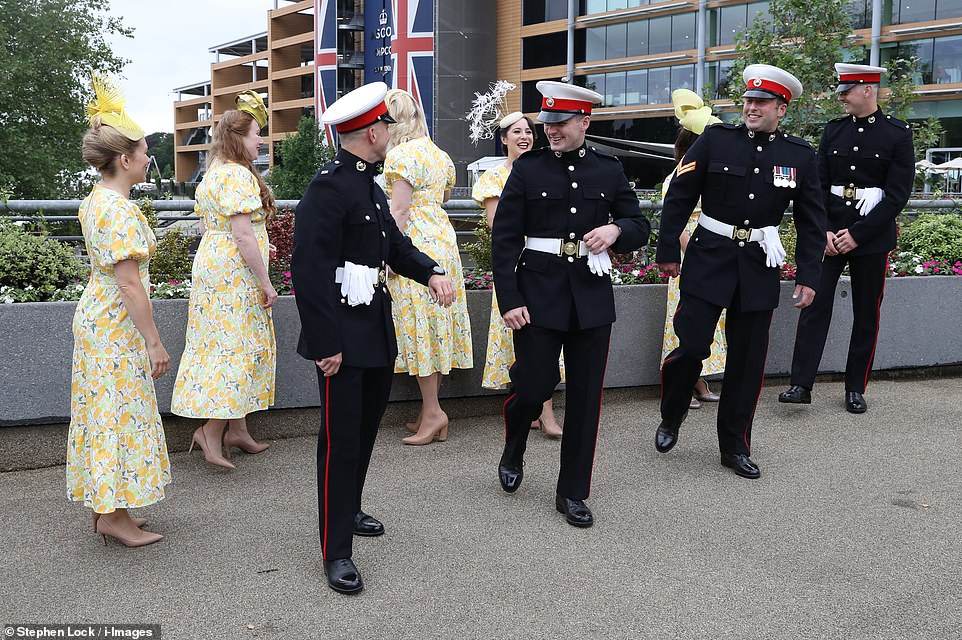 Ready for the races! Beaming racegoers have a ball as they put their best foot forward ahead of a group snap upon their arrival at the course today 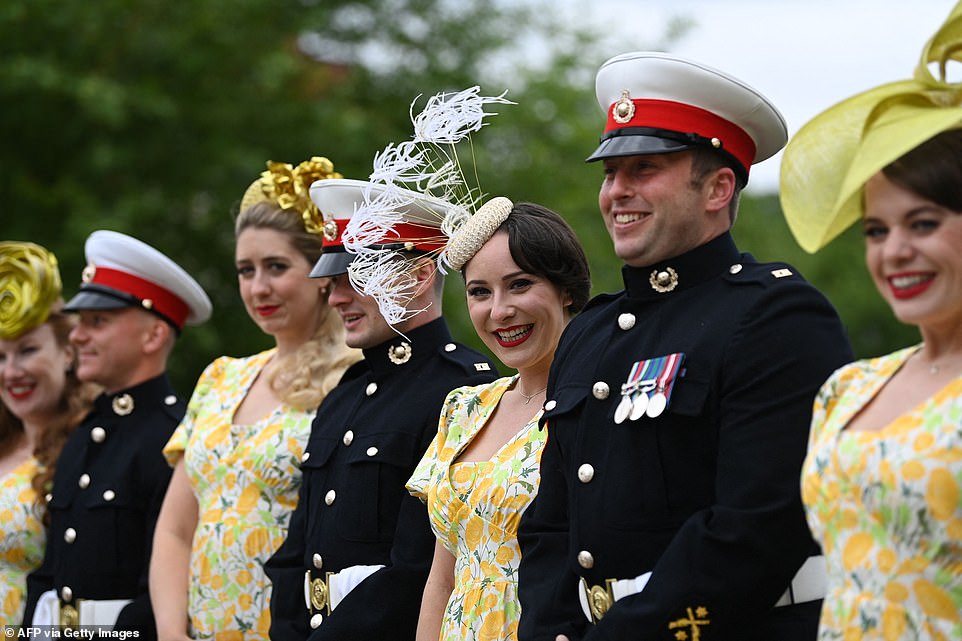 Lined up and ready to go! Racegoers pose for a photo before enjoying their day at the races. Royal Ascot reopened its doors to 12,000 racing fans a day but the coronavirus will still take a significant financial toll on the event, it has been reported 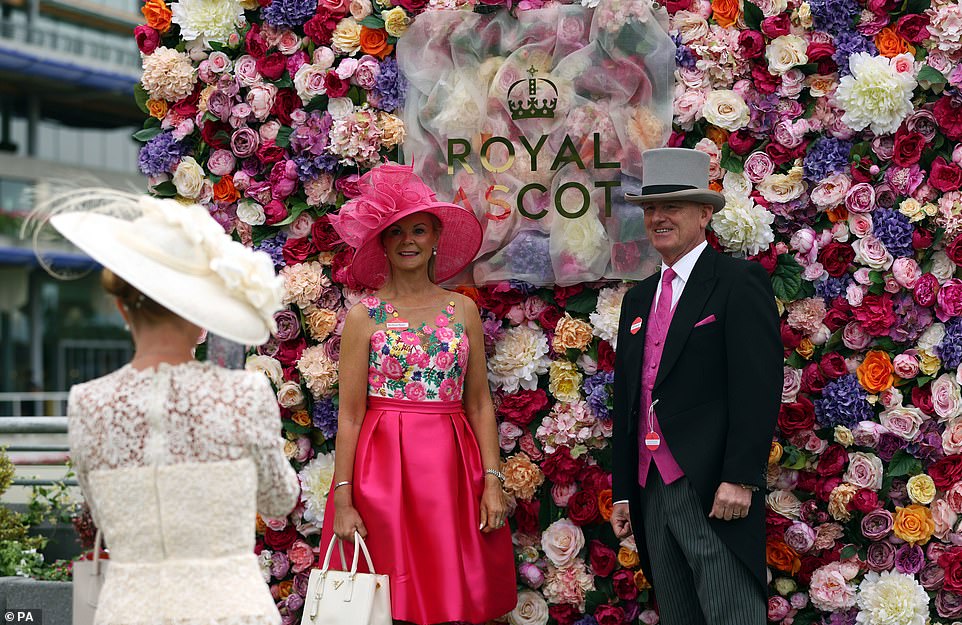 Ray of sunshine! Racegoers, pictured having their photograph taken, put their best fashion foot forward as they turned out for Royal Ascot

The Queen missed Royal Ascot for only the second time in 69 years. Her Majesty’s racing manager confirmed the monarch would not be attending on the first day but is hoping to make it later in the week depending on ‘how things go’.

The Queen’s racing manager John Warren told Radio 4: ‘Obviously the Queen would love to attend, as you know she’s fanatic about racing, watching racing and breeding horses, and has been going to Ascot all of her adult life. So, it’s a shame to miss an event.

‘The plan at the moment is to see how it goes towards the latter part of the week and if the Queen’s able to come because she’s got runners, then, fingers crossed, it will happen.’

He added that the monarch was ‘fanatic’ about horse racing, and called her energy levels ‘incredible’ despite her age.

He said: ‘It’s remarkable. The Queen’s energy levels are incredible. She’s 95. She went down to the G7 this week, and trundled back on the train in the middle of the night and the energy will be raised higher again for a week like Ascot.’