School students in NSW will begin a staggered return to face to face learning on Monday, October 18, one week earlier than initially planned.

School students in NSW will begin a staggered return to face to face learning on Monday, October 18 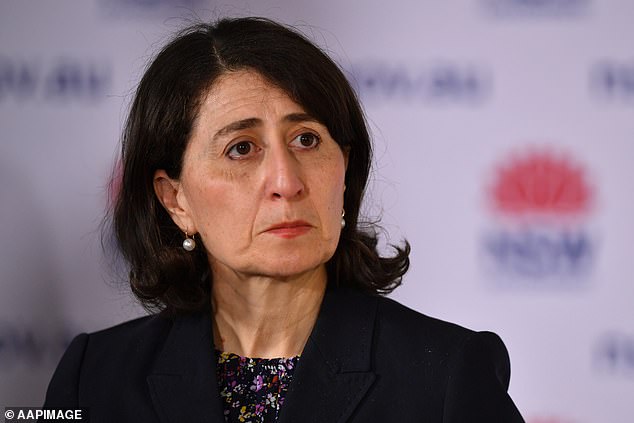 Premier Gladys Berejiklian said the return to school plan was always linked to the vaccination rates of the community, and would be brought forward a week due to NSW’s accelerated rate

The public health advice for parents to keep their children home from early childhood education and care services, where possible, will also be lifted from October 18.

Areas of Regional NSW where stay at home orders have already been lifted will continue learning face-to-face from Day 1, Term 4.

Premier Gladys Berejiklian said the return to school plan was always linked to the vaccination rates of the community.

‘We have been clear that a return to school should begin once the state passed 70 per cent fully vaccinated, and thanks to the incredible efforts from the people of NSW, we will reach that milestone sooner than expected,’ Ms Berejiklian said.

‘Managing a return in a school system the size of NSW’s is not a small task.

‘Keeping the staged approach, but moving it all one week earlier, allows schools to shift their plans forward and still provides time for staff and eligible students to get vaccinated.’

‘Whilst we can bring that start date forward by a week – which I know is welcome relief to students, teachers and families – the staggered recommencement will still be in place,’ she said at Thursday’s NSW Covid update.

‘At least all students, irrespective of what year they’re in, can look to returning to face-to-face learning a week ahead of schedule.’ 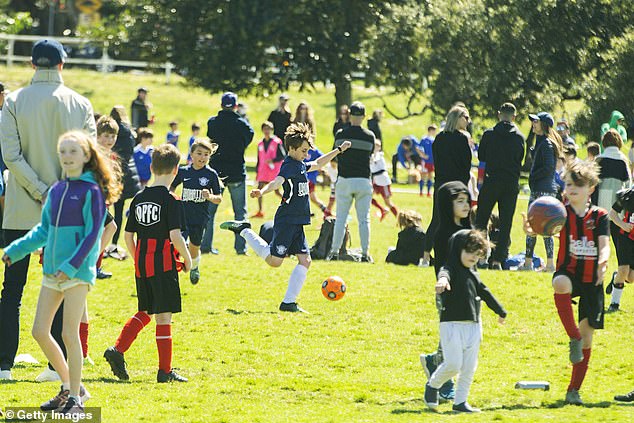 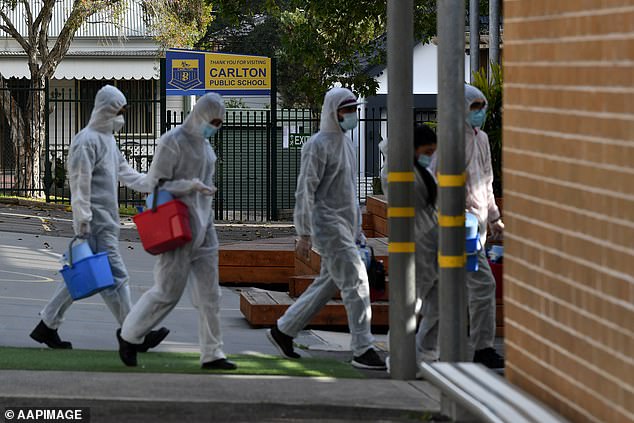 Workers conduct a deep clean at a public school in Sydney in August – schools will need to communicate Covid-safe plans to parents within the next week, including what will happen should a positive case be detected once classes resume

The premier said announcing the re-opening of the school system on October 18 would give teachers and students extra notice to get vaccinated.

‘Nearly 48 per cent of 12-to-15-year-olds that have had the vaccine. Our adult coverage is outstanding,’ she said.

‘That extra week between the 11th and 18th gives school communities that extra level of protection.’

It’s expected schools will begin communicating Covid-safe plans to families from next week, including what will happen should a positive case be detected once classes resume.

‘I know there remain some concerns in the community around a return to school, but students, staff and parents should feel confident that this approach allows enough time to make schools as COVID safe as possible,’ Minister for Education and Early Childhood Learning Sarah Mitchell said.

The announcement came as lockdowns were extended for 20 regional NSW towns as the state recorded another 941 Covid-19 cases and six deaths.

The Snowy Monaro region in the Snowy Mountains will enter a seven-day lockdown from 3pm on Thursday with the restrictions applying to anyone who has been in the area since September 22.

Stay-at-home orders have meanwhile been extended to October 11 for several other areas around NSW including Bathurst, the Central Coast, Newcastle and Shoalhaven.

But the premier also suggested the government was now considering bringing some freedoms scheduled for December 1 forward to when 80 per cent of the population are double vaccinated.

‘They won’t be major things but there will be tweaks. We’ll announce that at 70 per cent double dose,’ she said on Thursday.

In addition to the resumption of school-based learning, Sydneysiders will be able to make unlimited bookings at pubs and restaurants once the 80 per cent full vaccination threshold is passed.

Punters will be able to book tables at pubs and restaurants for an unlimited number of guests, however venues will still have to abide by strict density rules.