EXPRESS INFORMER > Science & Technology > Give that slug a hug! We must learn to love garden critters to help ecosystems thrive, experts say

Give that slug a hug! We must learn to love garden critters to help ecosystems thrive, experts say

They have long wreaked havoc in vegetable patches.

But now experts have suggested gardeners should embrace slugs and snails instead of trying to kill them off.

This would ‘take the stress out’ of looking after plants and restore ecosystems, the Royal Horticultural Society advisers said. But they accept that many RHS members may find the message that slugs are no longer ‘pests’ hard to accept.

The experts also suggested people learn to live with dandelions and brown lawns.

Speaking at a conference previewing next year’s Chelsea Flower Show yesterday, Clare Matterson, director-general of the RHS, explained the measures were ways the 600,000-strong gardeners’ organisation was on a mission to make gardens ‘thriving eco-systems’.

Allowing pests would help to restore nature in the UK, one of the ‘most nature-depleted countries in the world,’ she said. Dr Hayley Jones, slug and snail expert and the RHS’s senior entomologist, said it was researching nature-friendly ways to curtail slugs and snails.

Allowing slugs and snails in our gardens would help to restore nature in the UK, experts say 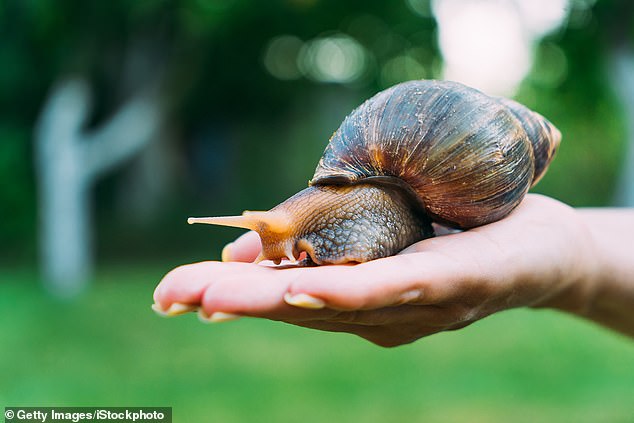 Dr Hayley Jones said: ‘We are definitely shifting to the idea that not all slugs and snails are bad’

A once commonly used slug pellet, metaldehyde, has recently been banned in the UK as there was evidence it was harming birds who had eaten the pests. While this year’s long, dry summer may have meant gardeners saw fewer slugs, the resilient creatures were likely to have just burrowed underground.

But instead of trying to eliminate slugs, Dr Jones advised, gardeners should ‘change their mindset’.

Rather than using chemicals, she advised removing them by hand. She added: ‘The easiest way to ease your stress as a gardener is say “there’s a slug” and be happy with that, and accept a bit of damage to your plants. We are definitely shifting to the idea that not all slugs and snails are bad.’

Meanwhile, Matthew Pottage, curator at RHS Wisley, said it was important to conserve water and ‘we have to move away from the idea that my lawn has died’ during warm weather. ‘I think people are beginning to understand that their lawn has just browned off. It is a bit of a luxury to keep them watered during a hot spell.’

He also said that we should enjoy the yellow flowers of dandelions, and could improve the pointing between paving stones to avoid the weeds growing there.