Gina Rinehart has pulled her $15million sponsorship from the Diamonds after the national netball team raised concerns about the deal.

Her mining company Hancock Prospecting released a statement on Saturday revealing it was withdrawing its support from the Australian team.

‘Contrary to media reports, Hancock Prospecting has not insisted that its name be worn by the Australian Diamonds in the current Constellation Cup series when overseas,’ the company said.

‘Hancock and Roy Hill does not want to add to Netball’s disunity problems and accordingly Hancock has advised the governing body that it has withdrawn from its proposed partnership, effective immediately.’

The move comes after the team expressed concerns over the environmental impact of the mining company and comments made by Ms Rinehart’s father Lang Hancock in the 1980s.

In a 1984 television interview, Mr Hancock made a shocking statement about Indigenous Australians.

‘The ones that are no good to themselves and can’t accept things, the half-castes -and this is where most of the trouble comes,’ Mr Hancock said in the 1984 documentary film Couldn’t Be Fairer.

‘I would dope the water up so that they were sterile and would breed themselves out in future and that would solve the problem.’

Mr Hancock died in 1992 at the age of 82, and said Indigenous Australians who had been ‘assimilated’ should be left alone.

‘Those that have been assimilated into, you know, earning good living or earning wages amongst the civilised areas,’ he said. 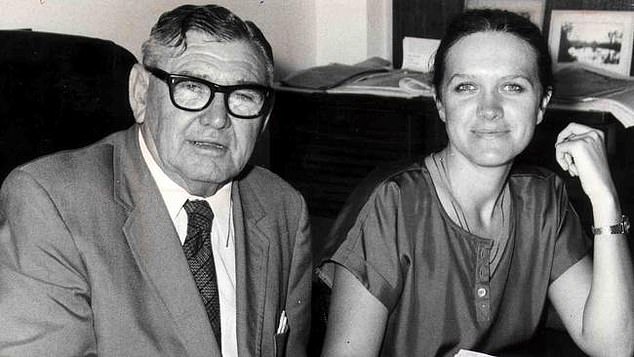 Gina Rinehart (right) is pictured with her father Lang Hancock, who started the company Hancock Prospecting. His comments from an 1984 interview have angered members of the Diamonds team

‘Those that have been accepted into society and they have accepted society and can handle society, I’d leave them well alone.’

The partnership between Hancock Prospecting and Netball Australia is reportedly worth $3.5million a year until the end of 2025.

‘We’ve always stood up for social justice, we’ve always been anti-gambling, no smoking … and there were, and are, other avenues to source sponsorship,’ said Ms Norder, who is a Sports Environment Alliance ambassador.