He’s only seven years old, but new NRL franchise the Dolphins might already have a beauty on their hands with Lenyx Fa’amoe Brown.

Weighing 54kg and nudging four foot tall, the young rugby league-mad footballer has been given all the tools for a successful career.

His proud father Shane has recently posted video of the towering junior tearing his way through the opposition team to score two tries for the Redcliffe Dolphins under-8 side.

Nice Redcliffe dolphins our under 8

The Cronulla Sharks are the family team and young Lenyx has modelled himself after wrecking ball Siosifa Talakai – even sporting the same haircut as his idol.

While prop would seem the obvious position for Lenyx, he insisted on wearing the No.4 jersey his idol sports and is developing his game on the Sharks centre.

‘This is his third year playing, he does love his football,’ his father Shane Brown said.

‘He loves Talakai from the Sharks, the same haircut, he insisted on wearing the No.4 jersey like him, he watches him play every time – that’s his idol.’

While there is no question that young Lenyx has side on his side, he is far from a one-trick pony. 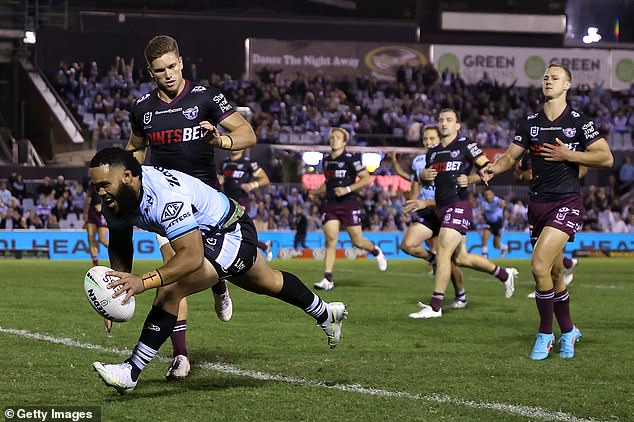 Shane Brown and his son Lenyx Fa’amoe Brown pose for a photo with Sharks back Sione Katoa (top). Lenyx is a mad Cronulla Sharks supporter and is modelling his game on Siosifa Talakai (pictured playing Manly this year, bottom)

Young Lenyx shows plenty of skill with his footwork and fend while opposition players are getting great lessons on how to pull off a textbook legs tackle to bring him down.

‘The whole team loves him, all the other kids on the field do too,’ Shane said.

‘It teaches them to tackle low. If they try and go up high, he defends himself with the fend. The kids that go low, they tackle him.’

Every day after school Lenyx practices his league moves including tackling drills with his 16-year-old brother Tyler. 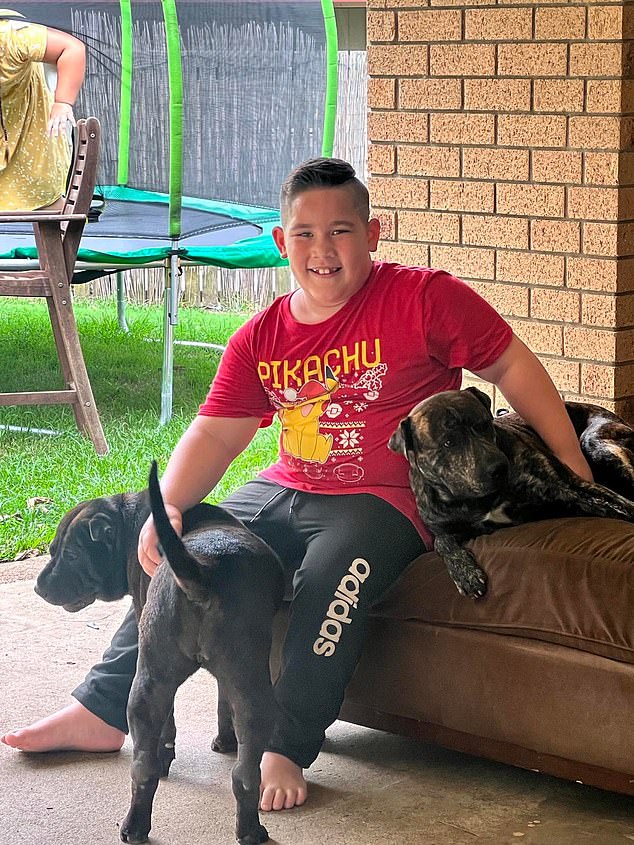 At just seven years old, Lenyx is already 54kg and almost four foot tall. He practices footy every day after school and loves playing against his 16-year-old brother

While the Brown family live in Kallangur on the north side of Brisbane – in the Moreton region the Dolphins will represent – they are a proud New South Wales supporting family and the Sharks are the family club.

Shane said having the Dolphins enter the NRL with master coach Wayne Bennett at the helm was a huge thing for their family, especially young Lenyx, who will have NRL pathways to aspire to.

‘All the kids talk about it … we believe Wayne Bennett will make a difference.’ 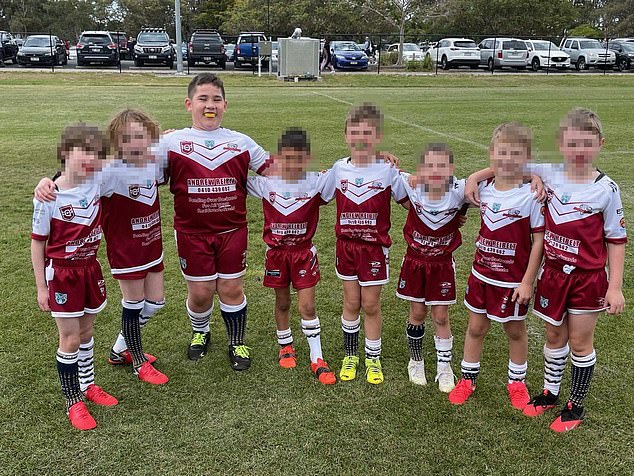 Lenyx (third from left) is a popular player at Redcliffe. The admission of the Dolphins into the NRL will give him, his teammates and players from surrounding clubs huge opportunities

Jason Goulding is the junior pathways coordinator at the Redcliffe Dolphins and he said the new NRL franchise would pave the way for kids like Lenyx all over Brisbane and give them an additional pathway to the top without having to leave the greater Brisbane region.

‘They [the juniors] don’t have to become Dolphins to make the NRL, they could be playing for Brighton, Pine Rivers, anywhere in Brisbane – they have still got that opportunity,’ he said.

‘With little players like Lenyx, for those playing against him there is a great opportunity to learn how to defend and that stands out just as much as well.

‘For all the affiliate clubs around Brisbane, this is an extra pathway into the NRL as well.

‘As much as we develop players in-house, we certainly put our hand up to develop these other clubs and some of the clubs around us, that come up against us, they are doing a tremendous job.’