According to Adventure World in the resort town of Shirahama, a cub born November 22 was declared male at birth but is actually female.

The unnamed animal was deemed a boy because the distance between its anus and urinary opening was longer than usually found in girl pandas.

But when zoo workers palpated the cub this week they found no testicles and realized a mistake had been made.

Pandas are born with undeveloped reproductive organs, officials say, making it difficult to sex them.

Adventure World made a similar misdiagnosis in 2005, announcing the birth of a female cub which later turned out to be male.

A panda cub born in Japan in November was mistakenly declared male at birth. Zoo staff have since determined the animal is female

When the as-yet-unnamed cub was born November 21, it was light pink and weighed less than six ounces.

At the time, Adventure World deputy director Tatsuko Nakao declared its mother, Rauhin, had given birth to ‘a healthy boy,’ according to The Mainichi.

‘He’s so healthy, Rauhin has to hold him tight—otherwise, he might jump out of his mother’s clasp,’ Nakao said.

Sexing pandas without genetic testing is notoriously difficult, according to The Wall Street Journal, ‘since the panda penis is virtually indistinguishable from female genitalia.’ 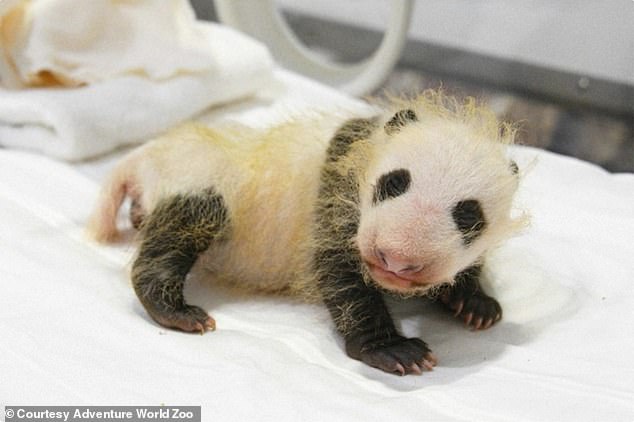 Because they’re born with undeveloped reproductive organs, determining the sex of baby pandas is notoriously hard. Now over two pounds, the infant girl has started to grown the telltale black-and-white fur of a giant panda 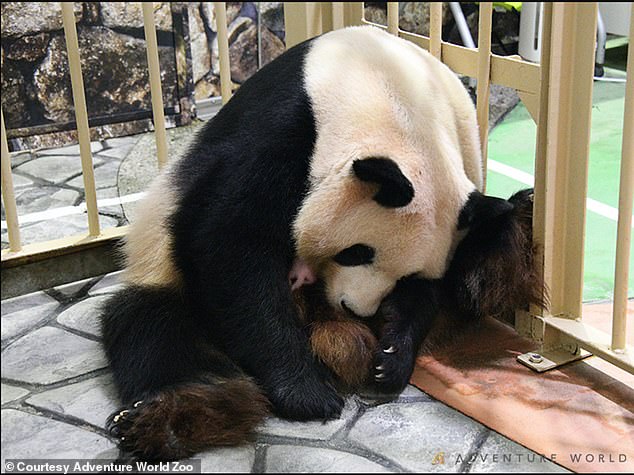 The unnamed cub being cuddled by her mother, Rauhin. The infant’s father, 28-year-old Eimei, is the oldest giant panda in captivity

In the 1940s, the first pandas brought to the US were intended to be a ‘breeding pair—until both turned out to both be boys.

In 1941 the Bronx Zoo ended up with another mismatched breeding pair, Pan-dee and Pan-dah, who turned out to both be girls.

Staffers at the National Zoo in Washington, DC, performed a DNA test on a cub born there in August before confirming it was male.

‘Pandas are born with undeveloped reproductive organs so it’s difficult to distinguish them,’ Nakao told reporters.

‘The way we rear them is the same for both males and females.’

The new cub is now over two pounds, and her telltale black-and-white fur has already started to become visible. 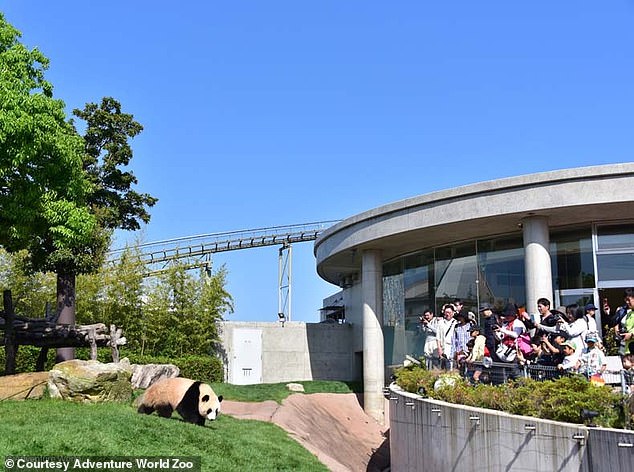 The zoo, located in Wakayama Prefecture, has invited the public to help come up with a name for the new cub. Once she’s grown, she’ll join a breeding program in China

The zoo, located in Wakayama Prefecture, has invited the public to help come up with a name, the Chinese state newspaper Global Times reports.

She’s something of a ‘miracle’ baby, sired by a 28-year-old male, the oldest giant panda in captivity.

If he were human, Eimei would be over 80.

Eimei is also the oldest panda in captivity to reproduce through natural breeding, with 15 other cubs, 22 grandchildren and three great-grandchildren.

The new cub is the first born at Adventure World in two years and would have been the first male in a decade.

The cub won’t be introduced to the public until February to lower risk of spreading the novel coronavirus.

Once she’s fully grown, she will be relocated to China to join a breeding program there.

WHAT DO WE KNOW ABOUT GIANT PANDAS?

While its numbers are slowly increasing, the giant panda remains one of the rarest and most endangered bears in the world.

An estimated 1,864 giant pandas are living in the wild and 548 in zoos and breeding centres around the world.

Experts are unclear what age giant pandas can reach in the wild, but the oldest panda reared in captivity so far was 38 years old.

A wild panda’s diet is 99 per cent bamboo, with the remaining one per cent made up of small rodents.

Four-month-old baby giant panda Xiang Xiang is pictured getting a physical examination at Ueno Zoo in Tokyo on October 10, 2017

Giant Pandas need to consume around 20 to 40 pounds (10 to 20 kilograms) of bamboo each day to get the nutrients they need.

They are around three to four feet tall when standing on all four legs.

Cubs do not open their eyes until they are six to eight weeks of age and are not able to move independently until three months old.

A newborn panda is about the size of a stick of butter, or about 1/900th the size of its mother.