A home surveillance camera has captured the horrifying moment a giant alligator grabs a six-month-old puppy in a Florida backyard and drags it back into a lake.

The incident occurred in the town of Lake Kathryn last Thursday, while homeowner Dale Barberi was out at work.

When he returned to his home – which backs onto the lake – Barberi was unable to find the young German Shepherd, named Mia, and quickly launched a frantic search. 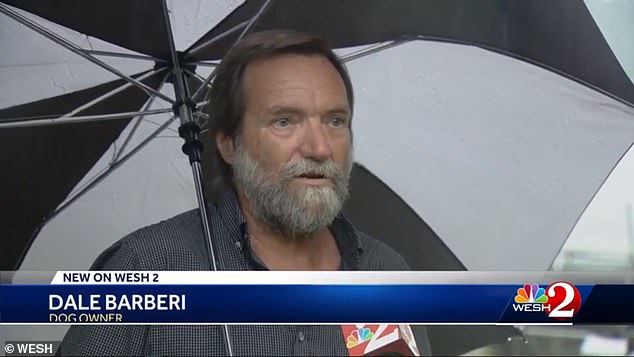 Dale Barberi returned to his home, which backs onto Lake Kthryn, and was unable to find his  young German Shepherd, named Mia

Barberi believed Mia may have been stolen, so he went to check his home security cameras and discovered the horrifying truth.

The footage shows the puppy playing with another dog at the edge of Lake Kathryn when the gator emerges from the water and traps the canine in its jaws.

Mia is seen struggling to break free from the predator before it pulls her into the water and disappears.

The video subsequently shows heartbreaking footage of Barberi’s three other dogs waiting by the edge of the lake for Mia to return.

One of the dogs is Mia’s mother, and the canines are all related.

‘I’m kind of sad about it,’ Barberi stated.

‘The way that gator just took her and wow, he was huge and he was fast. Less than two seconds and my puppy was gone.’

The Florida Fish and Wildlife Conservation Commission were called to the scene and a trapper found Mia’s  remains on the other side of the lake.

A hunter is now trying to find the massive gator who ate the beloved pup. 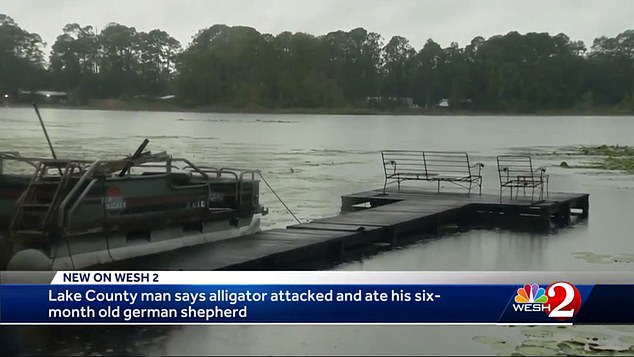