By Dan Bates For Dailymail.com

Ghislaine Maxwell has claimed she only talked about divorcing her husband after she was arrested to ‘protect him’.

The alleged ‘madam’ for Jeffrey Epstein said that she wanted to shield Scott Borgerson from the ‘terrible consequences of being associated with her’.

Maxwell told pretrial services a split could be on the cards as a way to ‘create distance’ between themselves.

Prosecutors have alleged the reality is she made ‘plainly inconsistent’ statements which undermined her claim that her husband was a strong tie America she would never abandon.

Maxwell tried to explain the discrepancy in documents as part of her effort to get bail before Christmas from the federal prison where she is currently in custody.

Ghislaine Maxwell was ‘in the process of divorcing’ her husband Scott Borgerson at the time she was arrested, court documents reveal. But new documents filed Wednesday claim he was only divorcing him to protect him from the horrible publicity. The couple are pictured in 2013

Maxwell, seen in a court sketch, is also accused of perjuring herself in a separate civil case and denies all the allegations. If convicted she faces up to 35 years in jail

Maxwell, 58, and Borgerson, 44, a tech entrepreneur, have pledged $22.5m of property and assets to try and free her while she awaits trial for procuring girls for Epstein.

Another $5m would be put up by family and friends and Maxwell would give up her three passports and submit to home confinement.

In a filing in federal court in New York, Maxwell confirmed the claim made by prosecutors that she was talking about divorce after her arrest, a detail she failed to disclose herself.

The document states that the idea of divorce was to ‘protect him…from the terrible consequences of being associated with her’.

During her first bail hearing in July, when Maxwell was remanded in custody, she only disclosed she had a $5m house in the UK and her own personal assets.

Weeks later Borgerson appears to have agreed to come forward and offer up all their assets for a renewed bail package. 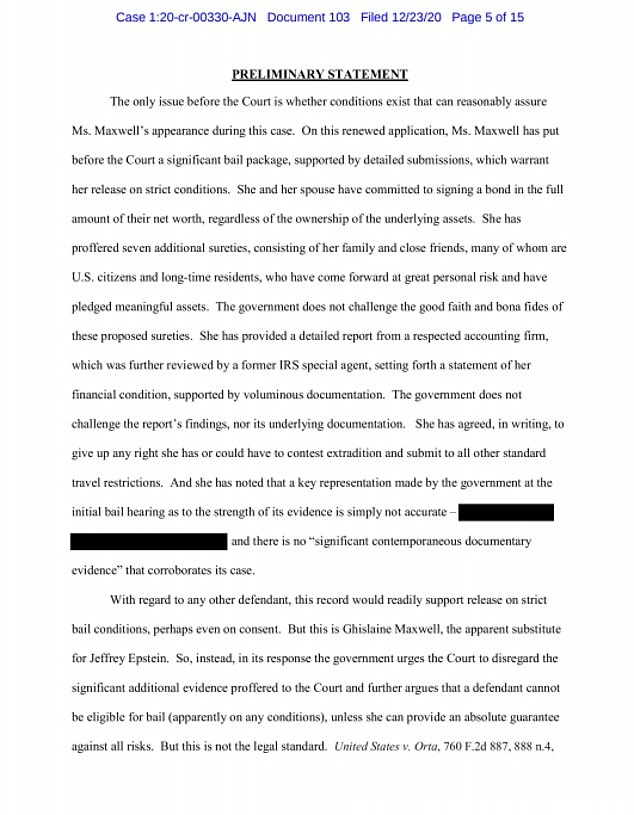 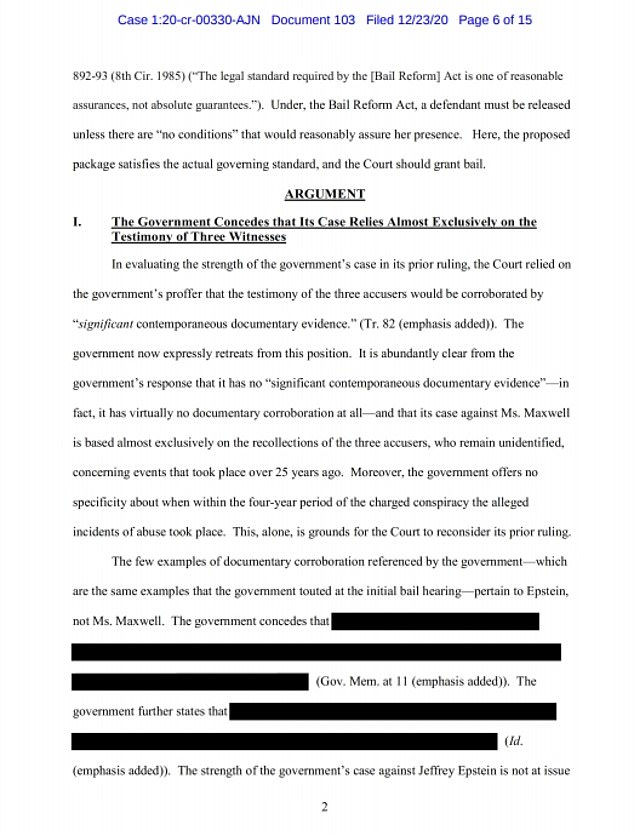 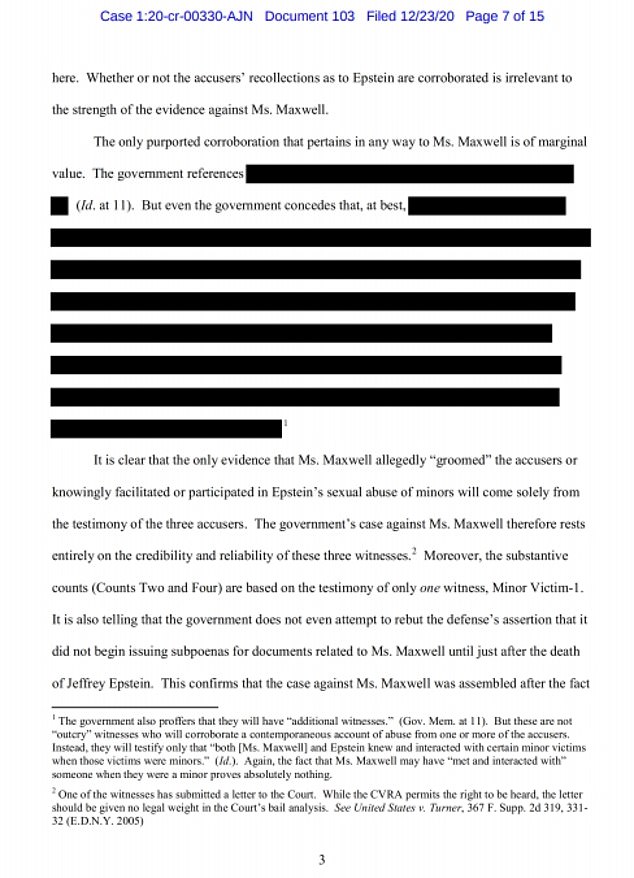 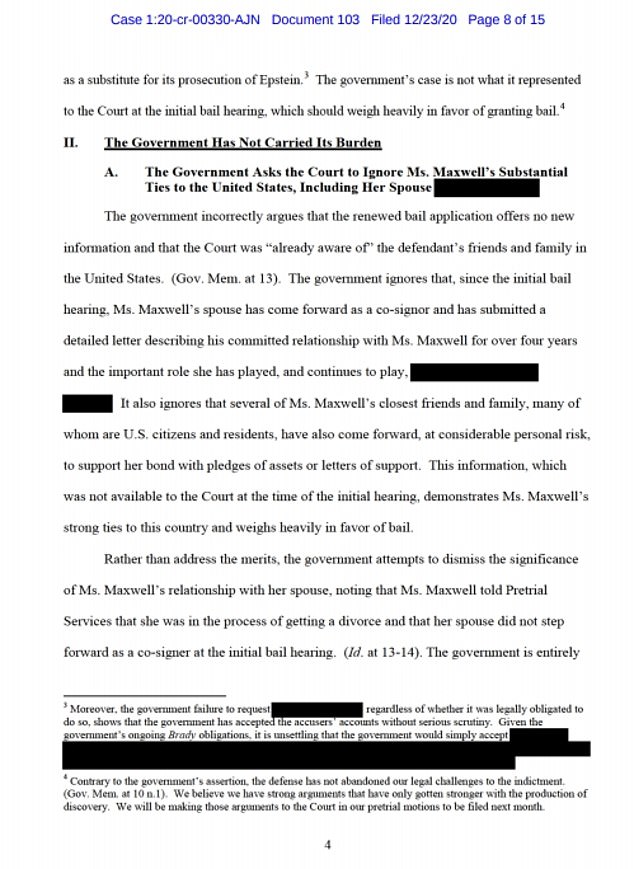 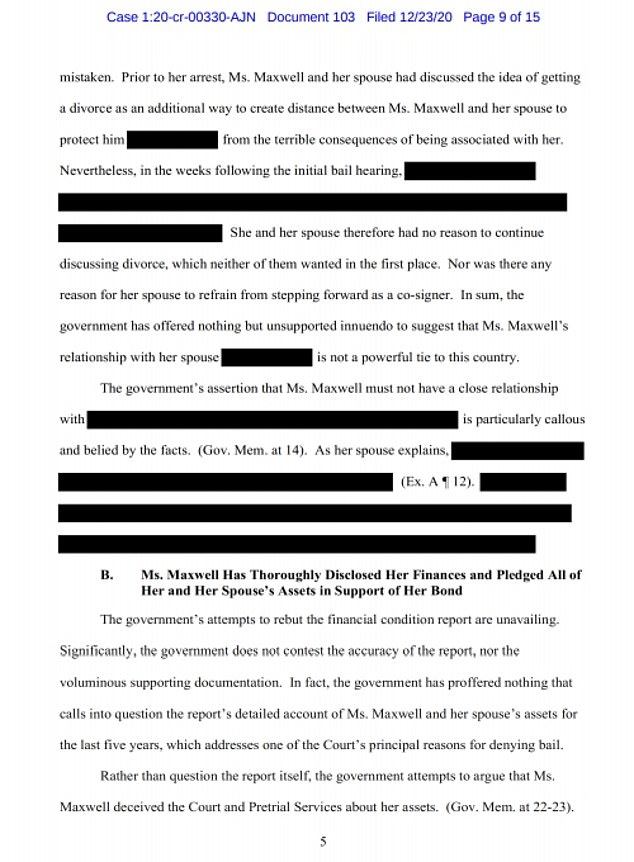 The couple ‘had discussed the idea of getting a divorce as an additional way to create distance between [them] to protect him from the terrible consequences of being associated with her,’ the documents claimed

The filing states: ‘She and her spouse therefore had no reason to continue discussing divorce, which neither of them wanted in the first place.

‘Nor was there any reason for her spouse to refrain from stepping forward as a co-signer.

‘In sum, the government has offered nothing but unsupported innuendo to suggest that Ms. Maxwell’s relationship with her spouse is not a powerful tie to this country’.

Maxwell’s letter to the court makes reference to the arrest last week of French model scout Jean-Luc Brunel, allegedly one of the key players in Epstein’s sex trafficking ring.

Brunel, 74, is accused of rape, sexual assault and sexual harassment of children by the authorities in France, which has no extradition treaty with America.

Lawyers for Maxwell, who has French citizenship, wrote: ‘Any incentive Ms. Maxwell might have to flee to France has been greatly diminished by the recent arrest in France of Jean-Luc Brunel, who reportedly is under investigation for alleged sexual assaults by Jeffrey Epstein’. 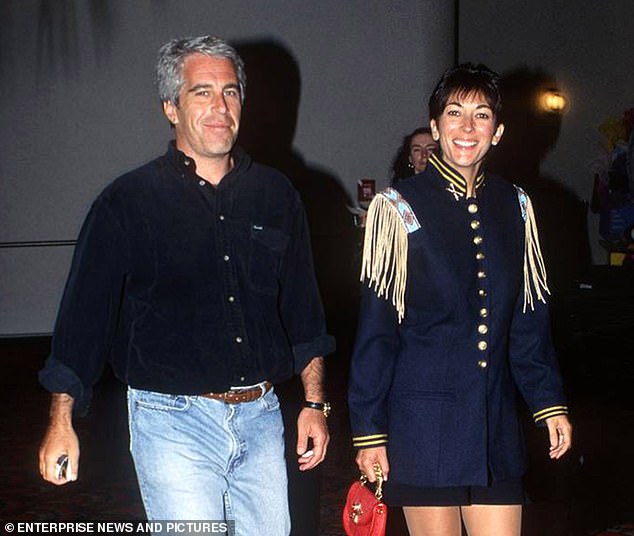 In the letter, Maxwell’s lawyers decry her treatment as ‘the apparent substitute’ for Epstein, who killed himself last August while awaiting trial.

They claim that prosecutors have ‘lost all objectivity’ when examining her finances and seem intent on seeing ‘any fact involving Ms. Maxwell in the worst possible light’.

They claim that despite having $2m in personal assets and $22.5m in the name of her husband Maxwell has ‘no certain future income stream’.

Maxwell is accused of procuring girls as young as 14 for Epstein between 1994 and 1997.

She is also accused of perjuring herself in a separate civil case and denies all the allegations.

If convicted she faces up to 35 years in jail.