EXPRESS INFORMER > News & Politics > Get your CAR off my land! Moment farmer uses a DIGGER to flip vehicle over blocking his gate

Get your CAR off my land! Moment farmer uses a DIGGER to flip vehicle over that’s blocking his gate – while its irate driver can only film on his phone

A farmer destroyed a car with a digger after the owner left it parked in front of a gate to his land.

The tiny silver hatchback was scooped up by the telehandler and flipped over.

A shirtless man – believed to be the owner – tried to remonstrate with the digger driver.

But despite him kicking the cab, he drove straight at the vehicle and tossed it in the air using spikes on the front.

The driver ignored the angry pleas for him to stop and barged it out of his field in a video posted on Spotted In Yorkshire yesterday.

He then looked to see if any other traffic was coming before pushing it down the country lane.

The farmer knocked the man to the ground as he swung back round to return to his farm.

The road was left littered with glass and debris from the bizarre incident.

The video was posted by Elliott Johnson on Snapchat who said: ‘Glad it was just my courtesy car.’

‘Motorist has smartphone. Farmer has forklift. Who’s gonna win this one?’

Charlie Finnerty, of Rochdale, Gtr Mancs posted the video yesterday/on Sunday and it has already racked up over one million views. 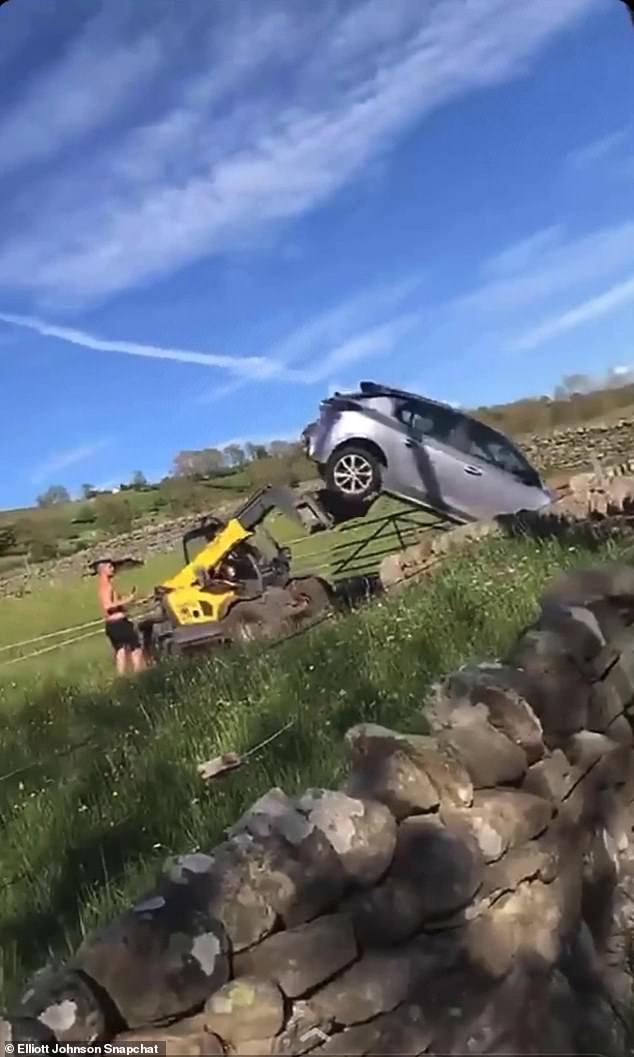 He said: ‘Wow, don’t park in front of farmer’s gates.’

However, the farmers’ actions divided opinions.

Mary Harris joked: ‘I love the way the farmer looks right to check no oncoming vehicles before pulling out.’

Mike Hillen said: ‘There was an easier solution to this, farmer should have chained and padlocked his gate closed.

‘Stopping the car from leaving then waited for car owner to knock on his door, he could of then charged him whatever amount to open the gate.

‘No court, no lawyer bills.’

Thomas Williams added: ‘As satisfying as it is to see someone who is clearly pondlife get his just desserts.

‘This is definitely criminal damage and perhaps even GBH when he hits him with the vehicle.’

But one cyclist – called Hannah – said: ‘I fully condone this.

‘Well done farmer for getting rid of this car in front of his gate.’