Countries across Europe are continuing to battle the second wave of coronavirus, with lockdowns taking effect to stop the rising number of infections.

Germany and Italy both announced their highest ever daily infections on Friday, with fears also growing over testing capacity and hospital beds.

Austria warned that all its Covid-19 intensive care beds could be full within two weeks if the current rate of infection continues.

It comes as more than 12 million cases of coronavirus have now been recorded in Europe, making it the hardest-hit zone in the world by infections.

Health minister Jens Spahn warned that ‘the situation is serious’ after the number of Covid patients being treated in intensive care units doubled in the last 10 days. 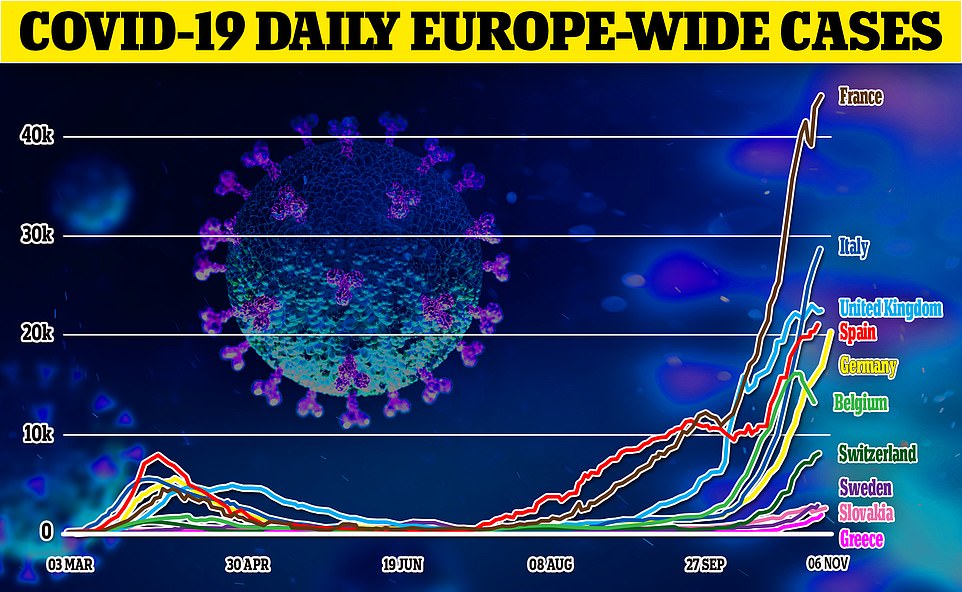 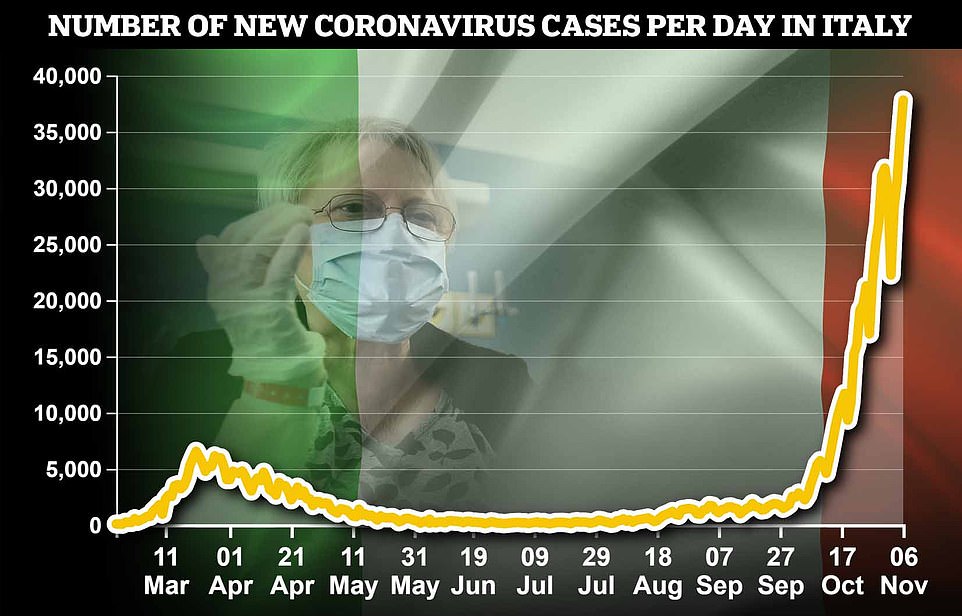 He said: ‘As of today, the health system can cope with this, but a doubling every 10 days is something the best health system in the world can’t cope with in the long term.’

Laboratories in Germany are also near capacity, with scientists wanting stricter criteria for which people are tested.

Meanwhile in Italy, the northern regions began a month-long lockdown on Friday as the country braced for a new curfew. GERMANY: A record 21,506 cases were announced on Friday, bringing the total since the outbreak of the pandemic to 619,089. Pictured: a nurse in Bundeswehr Hospital wearing PPE 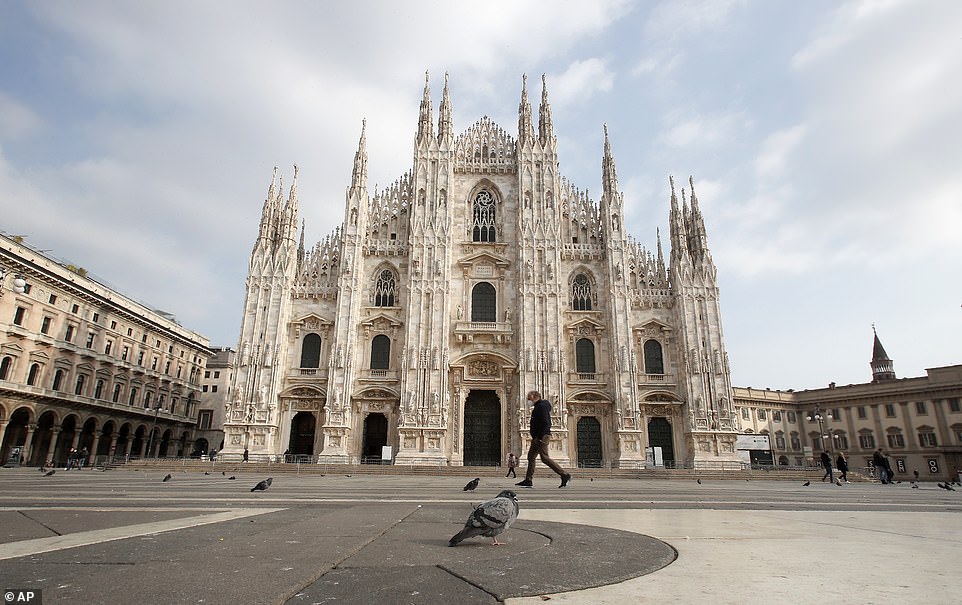 ITALY: Northern regions including Milan (pictured) began a month-long lockdown on Friday as the country braced for a new curfew 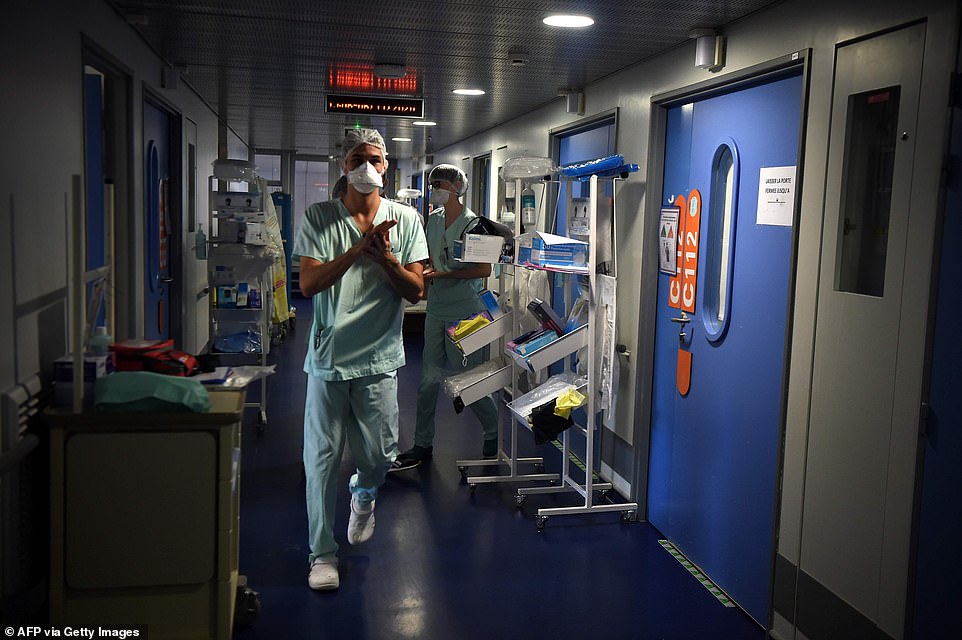 FRANCE: Prominent doctors warned the lockdown, which came into effect last week, will not be enough after 58,046 new cases were recorded on Thursday 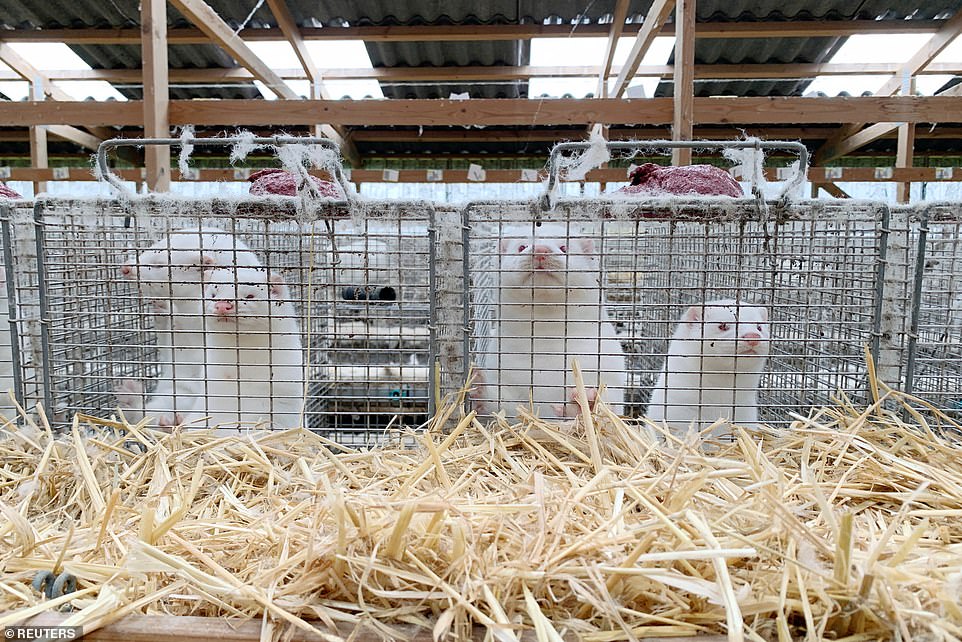 DENMARK: An entire region has been forced into lockdown and the culling of up to 17million mink has been ordered after identifying five mutant-mink strains of coronavirus in 12 people

Italy has registered 37,809 new coronavirus infections over the past 24 hours, the health ministry said on Friday, the country’s highest ever daily tally and up from 34,505 on Thursday.

The ministry also reported 446 COVID-related deaths, up from 445 the day before.

A total of 40,638 people have now died because of COVID-19 in Italy, which has registered some 862,681 coronavirus infections since the start of its outbreak.

The neighbouring Piedmont region was the second-worst affected, chalking up 4,878 cases. 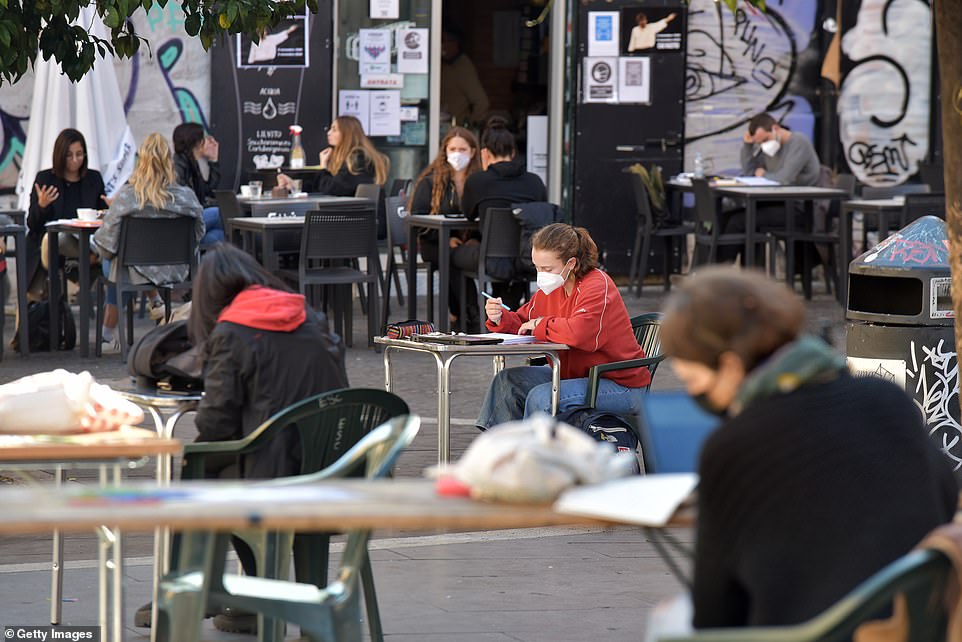 University students study in the street in the San Lorenzo of Rome on Friday, with each student sat on their own table amid rising cases 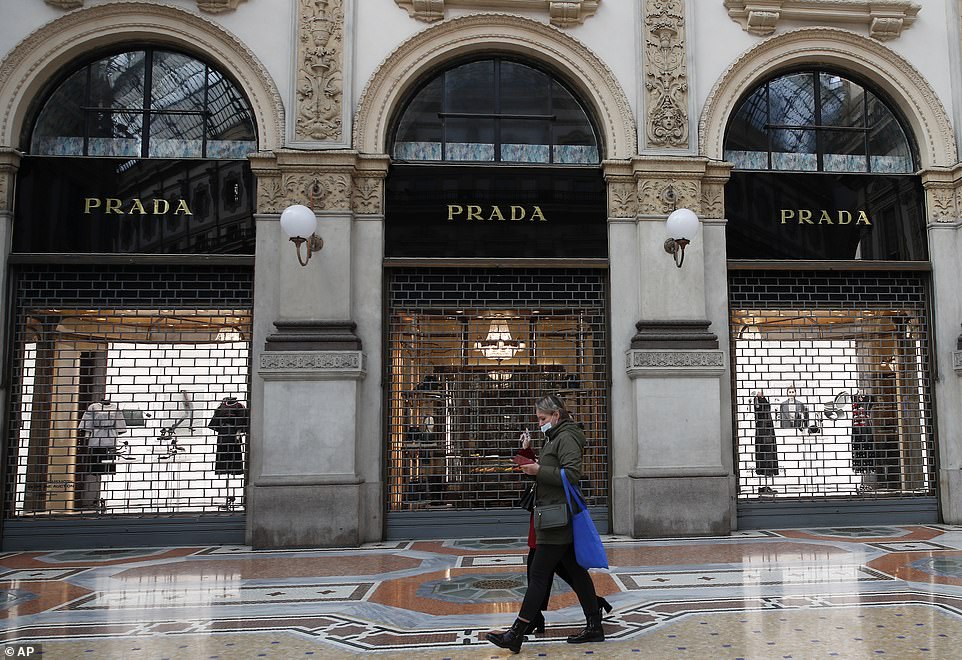 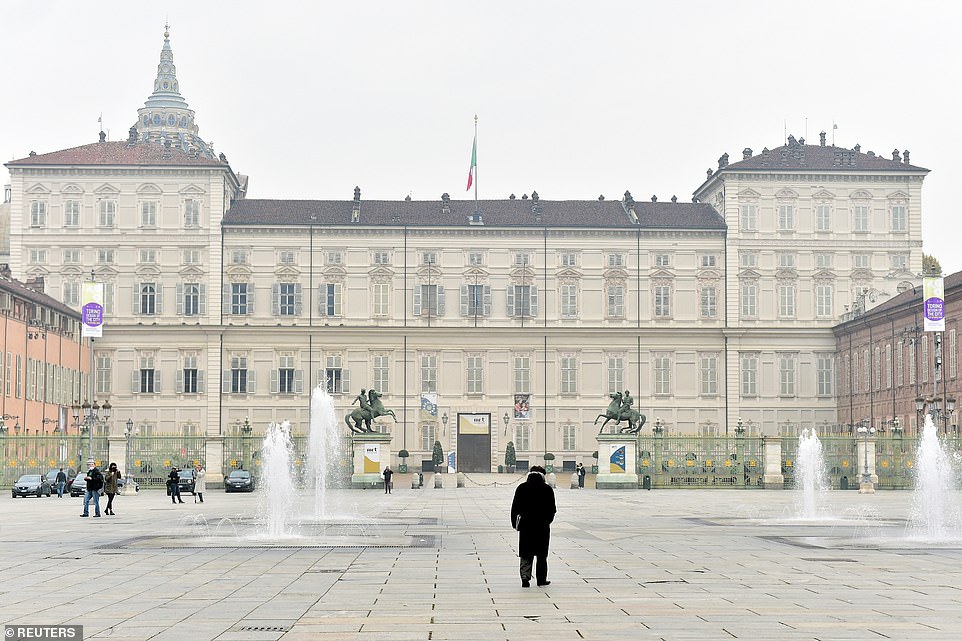 People walk at an almost deserted Piazza Castello square, as the spread of the coronavirus disease continues in Turin

The latest decree signed by Prime Minister Giuseppe Conte divides Italy into three zones according to the level of risk, with a lockdown ordered for prosperous Lombardy, fellow northern regions Piedmont and Val d’Aosta, as well as one southern region, Calabria.

The normally bustling centre of Lombardy’s capital Milan was subdued on Friday, with those still circulating under grey skies heading to or from work or shopping for essentials, as allowed under the new rules.

‘A lot of people see this as an unfair decision and in fact, it’s a little bit the case,’ said Suzy Porcu, 55, a Milan resident. ‘If you need to have a lockdown it should be for everyone.’

‘In either case, we haven’t learned anything from what we went through in March.’

Italy was the first European country to be hit hard by the coronavirus pandemic in March, and the government imposed a more than two-month quarantine that battered its already struggling economy.

Infection rates slowed over the summer but, as in other parts of Europe, the virus has surged once again in recent weeks, with 445 new deaths and 34,505 new cases reported on Thursday. 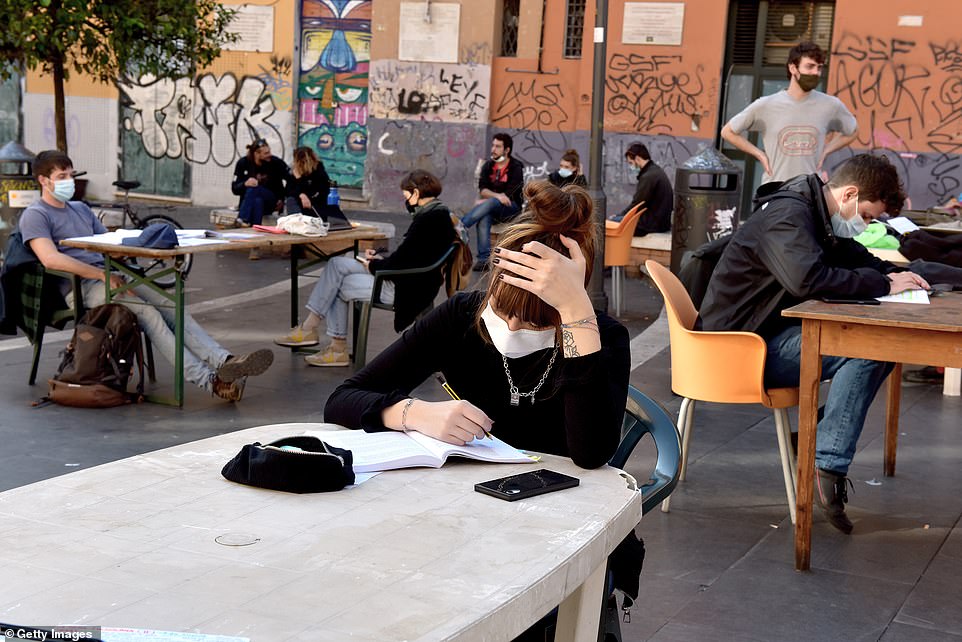 Italy was the first European country to be hit hard by the coronavirus pandemic in March, and the government imposed a more than two-month quarantine that battered its already struggling economy 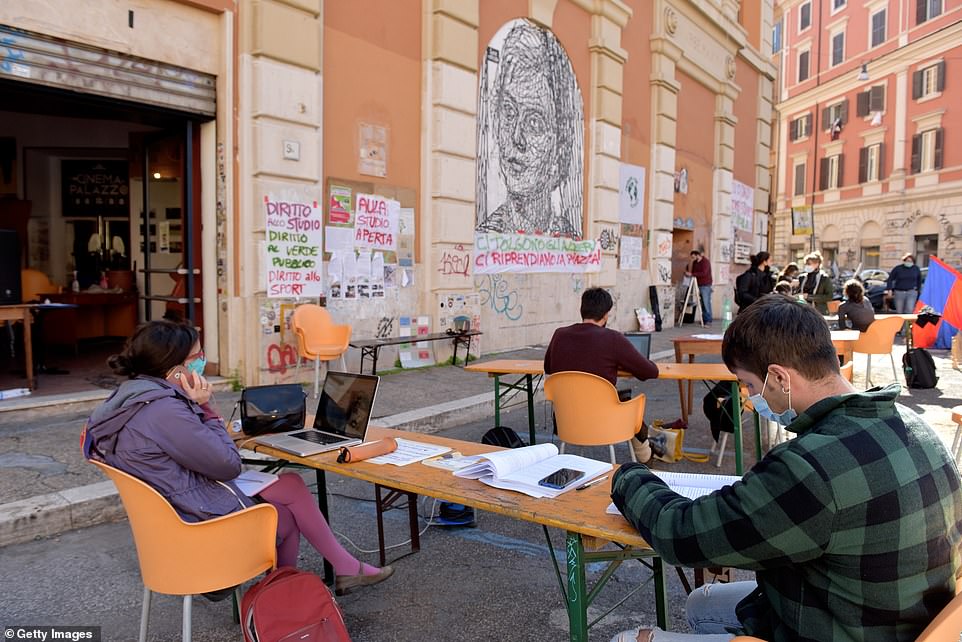 Italy has registered 37,809 new coronavirus infections over the past 24 hours, the health ministry said on Friday, the country’s highest ever daily tally 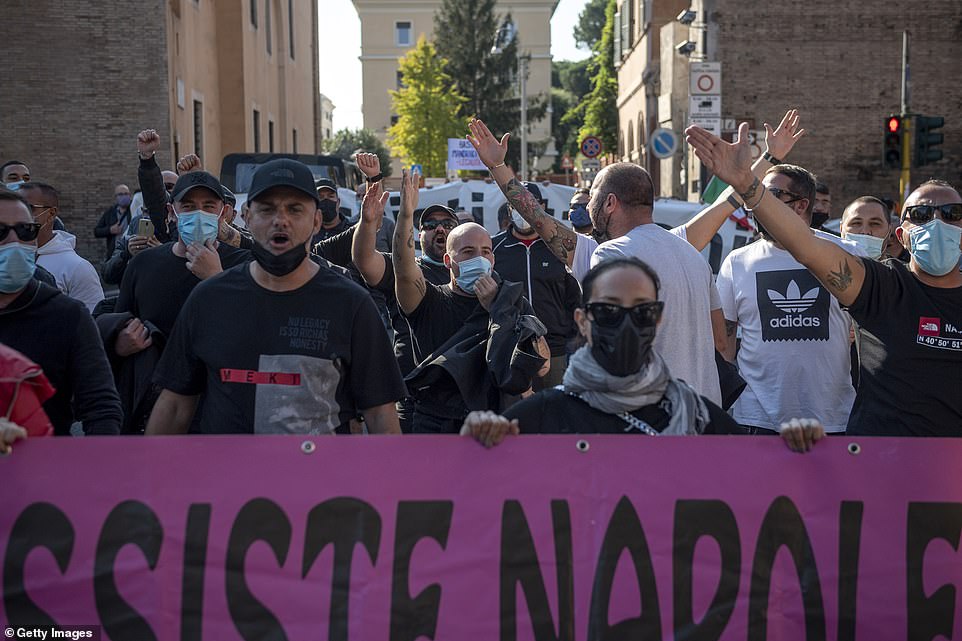 Fresh restrictions, which include the new countrywide curfew from 10pm-5am as well as the early closure of bars and restaurants introduced late last month, have already set off protests, including in areas spared the most stringent lockdowns, such as Rome and Naples.

In the northern city of Bergamo – the epicentre of the first outbreak – several hundred protesters demonstrated in front of the mayor’s home Thursday night, hurling smoke bombs and shouting ‘Liberty’.

Mayor Giorgio Gori wrote on Facebook that unlike during the first quarantine – when images of army trucks in Bergamo transporting coffins from the overflowing morgue were seen around the world – ‘there is more tiredness and more distrust around.’

Austria warned on Friday that all its Covid-19 intensive care beds could be full within two weeks because of the ‘much stronger, more serious’ second wave of coronavirus infections.

There was a sharp drop to 6,464 new infections within 24 hours from a record 7,416 the day before, but Health Minister Rudolf Anschober said the number was still alarming. 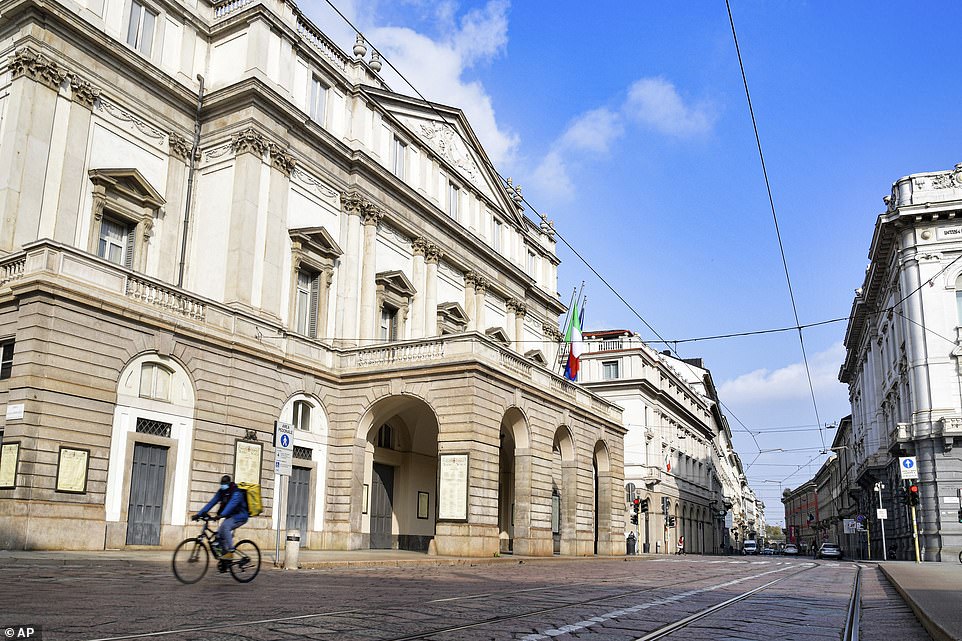 The latest decree signed by Prime Minister Giuseppe Conte divides Italy into three zones according to the level of risk, with a lockdown ordered for prosperous Lombardy (pictured) 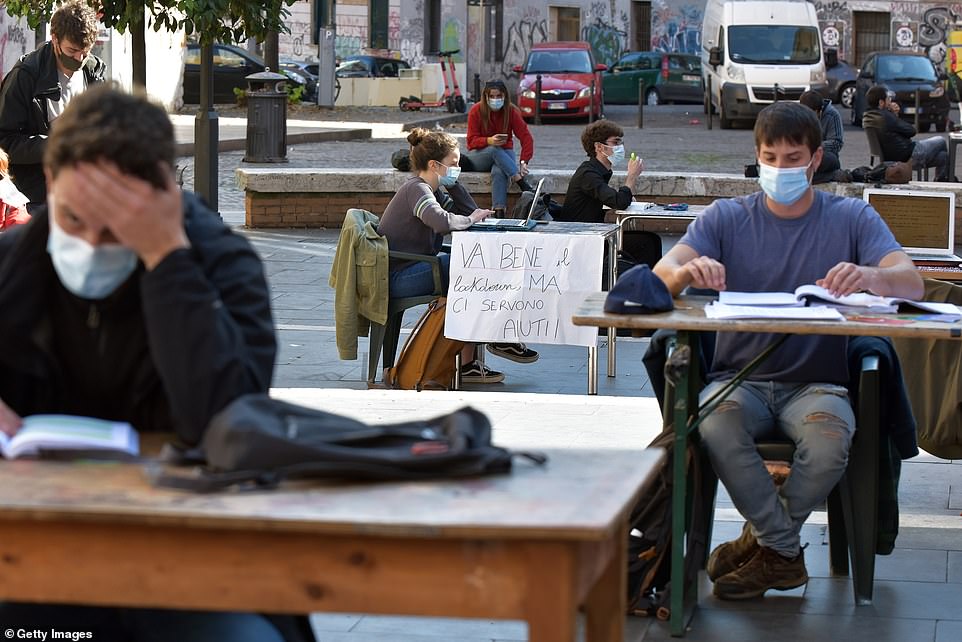 Protests have taken place in Italy including in areas spared the most stringent lockdowns, such as Rome and Naples

Forty-one people died in the latest reporting period, and 421 were in intensive care.

Since Tuesday, a nighttime curfew has been in force and cafes, bars and restaurants are closed to all but take-away service. Factories, shops, kindergartens and primary schools remain open, while secondary schools and universities have switched to distance learning.

The director general of the National Public Health Institute, Herwig Ostermann, said his projections indicated that, even with these measures in place, 750 of Austria’s 800 intensive care beds reserved for COVID-19 patients were likely to be filled by November 18.

Tracing the source of a coronavirus infection has become harder and is being achieved in only 27 per cent of cases, said Daniela Schmid, chief epidemiologist at Austria’s Agency for Health and Food Safety (AGES).

The average age of those infected is currently 43, she said. 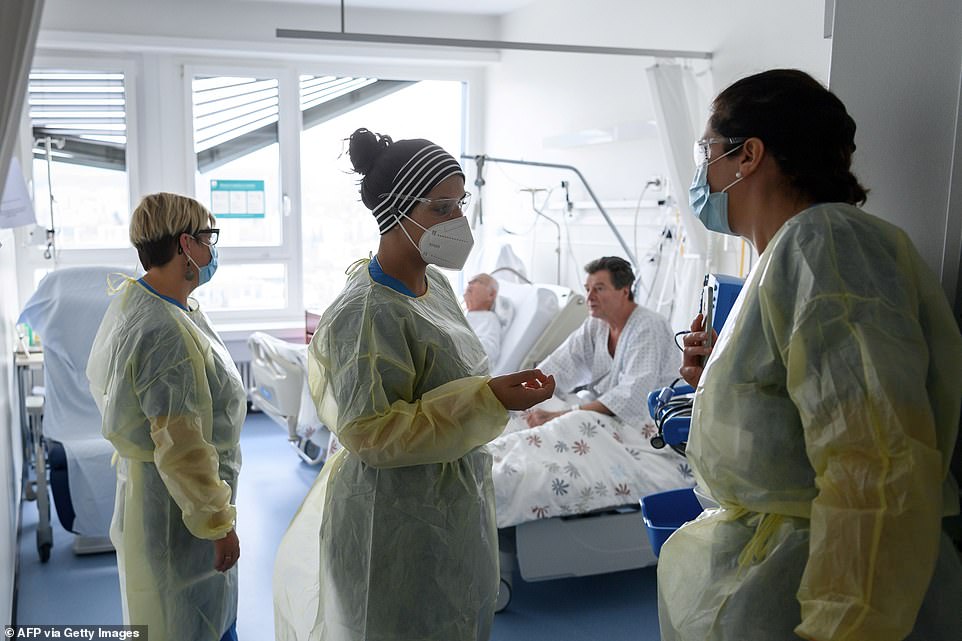 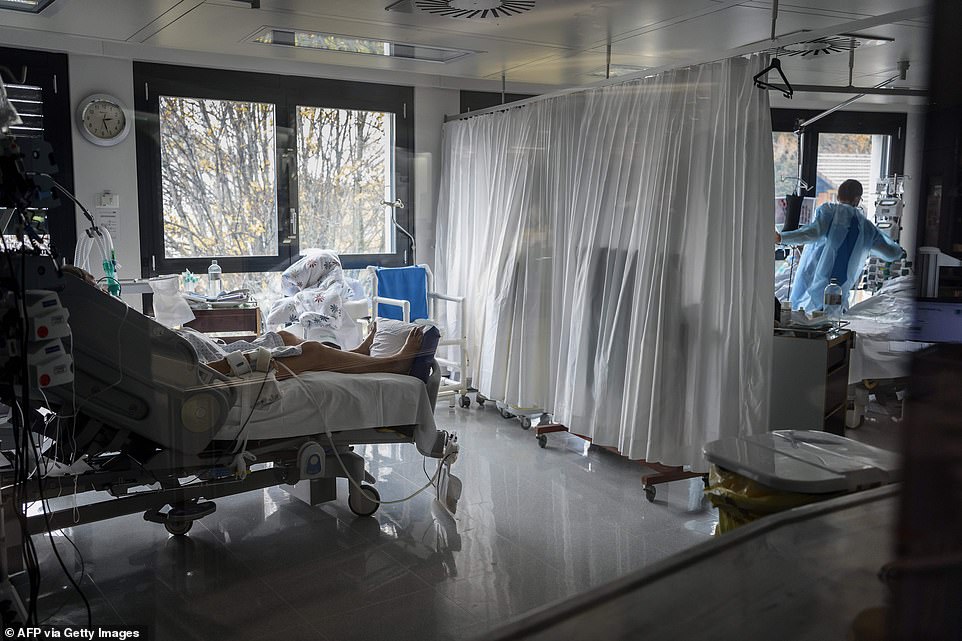 Swiss doctors have complained about having to most coronavirus patients out of intensive care units to make way for new, more serious cases 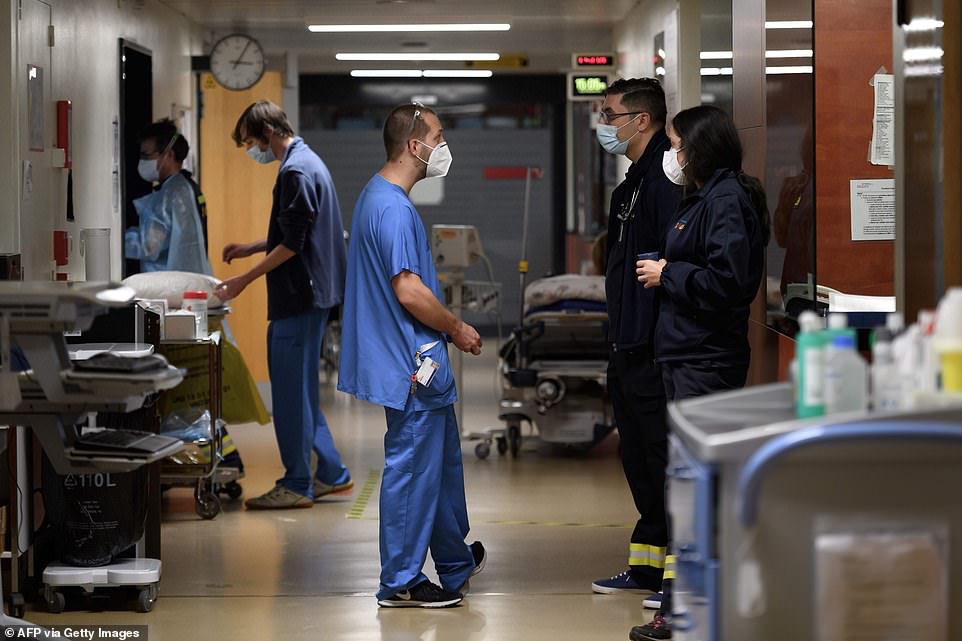 World Health Organization’s regional director Hans Kluge said Covid-19 was surging in Europe as its 11.6mllion infections put it above Latin America and the Caribbean’s 11.4 million

In Switzerland, doctors have complained about having to most coronavirus patients out of intensive care units to make way for new, more serious cases.

‘This morning, I was asked to take one more patient… so I had to transfer the most stable patient I had to another hospital to make room,’ Herve Zender, the chief physician at the La-Chaux-de-Fonds’s ICU, told AFP.

‘We do see an explosion… in the sense it only takes a couple of days to have over the European region an increase of one million cases,’ he told AFP.

Countries across the continent are imposing new lockdowns, with Greeks facing stay-at-home orders from Saturday. 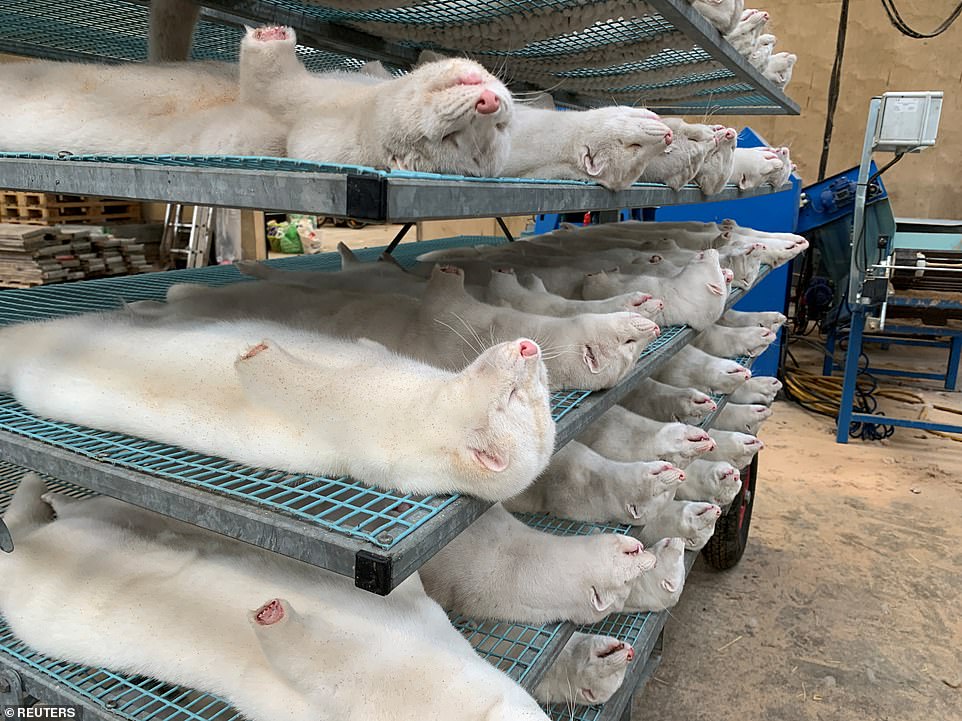 In Denmark, authorities are particularly concerned about a strain called Cluster 5 which Covid-19 antibodies in humans are less good at tackling, prompting an increased risk of re-infection 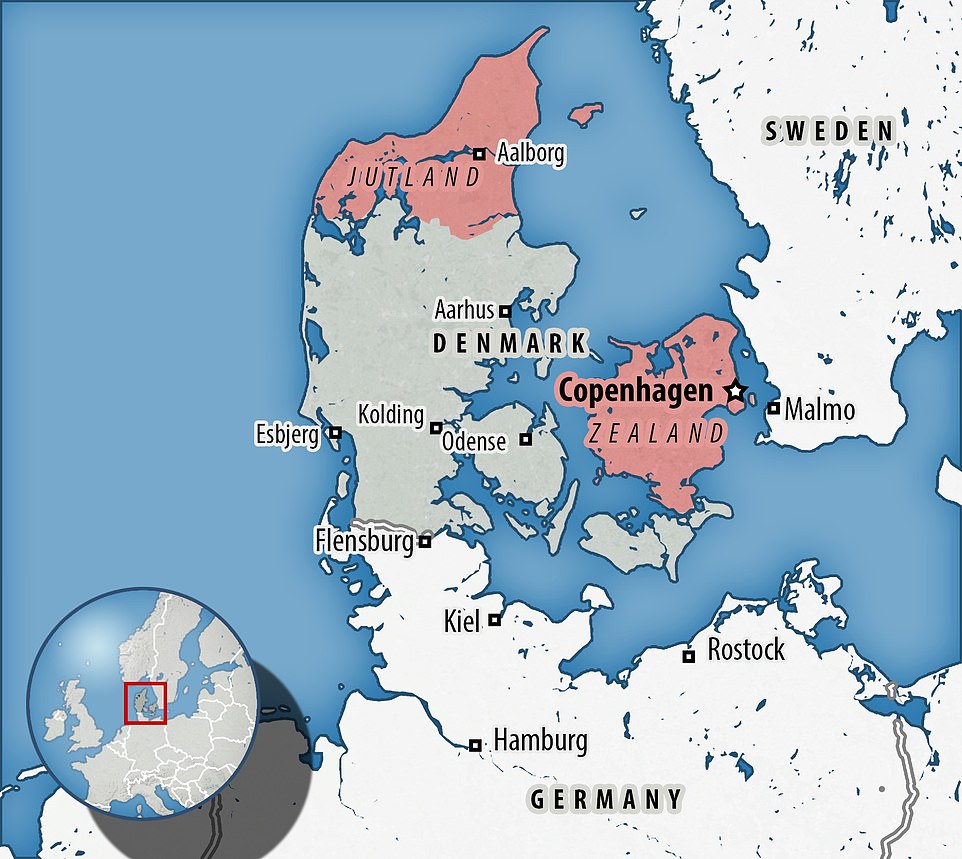 Cluster 5 has been found in 11 people in North Jutland (top) and one person in Zealand (island). Denmark has ordered seven areas in Jutland into lockdown

In Denmark, 280,000 people were restricted in the northwest after a mutated version of the new coronavirus linked to mink farms was found in humans.

Denmark, the world’s largest exporter of mink fur, had earlier said it would cull all of its 15-17 million minks.

While not more severe than the normal virus, the mutated version ‘could pose a risk that future vaccines won’t work’, Prime Minister Mette Frederiksen said.

France locked down last week, and the Paris mayor announced Thursday that stores selling alcohol and food will now be forced to close at 10 pm.

France recorded 58,046 new cases Thursday as some prominent doctors warned the lockdown, which allows schools to stay open, will not be enough.

Greece is also going into a second nationwide shutdown Saturday to try to halt an aggressive spike in cases.

Traffic in Athens was dense with people rushing to run errands before the weekend.