Germany today saw its smallest rise in coronavirus cases for more than three weeks as the epidemic continues to lose pace.

The 2,082 cases added to the tally today are the fewest since March 22 and mark a fourth straight day of decline in new infections.

Germany last saw fewer cases on March 22 when 1,948 were added to the tally while the curve was still heading upwards.

Cases were spiralling by a regular 15-25 per cent per day at the height of the crisis, but the jump was down to 2.1 per cent yesterday and 1.7 per cent today.

The average of 3,696 daily cases in the last week is well below the average of 5,330 in the previous seven days.

Bavaria remains the worst-affected state with 33,569 confirmed cases, including more than a quarter of today’s new infections.

Berlin has seen 4,668 cases and 56 deaths, while Hamburg has also been relatively hard hit.

Germany’s death rate remains relatively low at 2.4 per cent, meaning that one out of every 42 confirmed patients has died.

The low rate is thought to be linked to mass testing, meaning that many people with mild symptoms are counted in official figures but missed in other countries.

A team of experts yesterday recommended a gradual lifting of restrictions if infections continue to stabilise at a low level. 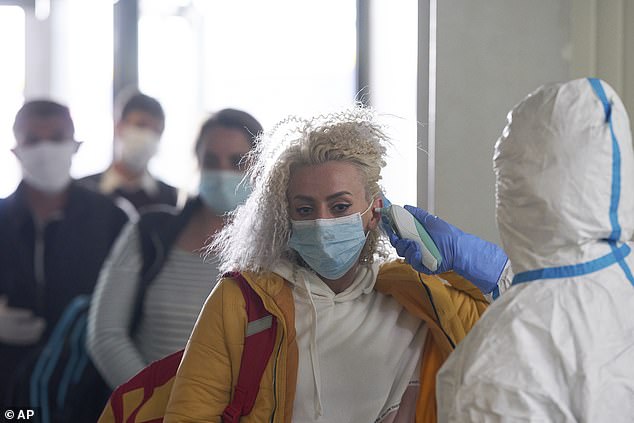 Angela Merkel is due to meet the leaders of Germany’s 16 states on Wednesday to discuss the lockdown rules, which are currently due to expire on Sunday.

They will draw on advice from the Academy of Sciences Leopoldina which has recommended re-opening primary and middle schools as soon as possible.

The Academy, which includes medical researchers and social scientists, said shops and restaurants could re-open with rigorous social distancing measures.

Childcare facilities would remain closed under the Academy’s scheme, but government offices could re-open.

The head of the Academy, Gerald Haug, said people would have to wear masks on public transport to prevent a resurgence in new cases.

‘Every citizen should in the future have this type of protection for their mouth and nose and wear it each time social distancing measures can’t be respected,’ he told Der Spiegel.

Over the weekend, Germany’s health minister Jens Spahn had already signalled a phased easing of restrictions that may vary by region.

He did not specify which sectors in Europe’s largest economy could first see loosened restrictions.

The economy is projected to contract 9.8 per cent in the second quarter, the biggest decline since records began in 1970.

A 9.8 per cent drop would be more than double the decline seen during the global financial crisis in 2009.