Germany today lined up tough new measures in its largest cities while hospitals warned of staff shortages amid an alarming spike in coronavirus cases.

Angela Merkel and the mayors of 11 cities including Berlin, Hamburg and Munich have agreed the new rules, including bar curfews and outdoor masks, which will kick in when a city passes 50 cases per 100,000 in a week.

Cities will also be able to send for the German military to help with contact tracing under the package of new measures.

Berlin, which has recently become an infection hotspot, is already above the threshold after more than 1,600 new cases in the last week.

‘These are the days and weeks that will determine in what shape Germany will get through winter in this pandemic,’ Merkel said today – adding that keeping the economy open was her ‘top priority’.

Germany has seen cases spike to more than 4,000 per day for the first time since April, leading to fresh concern about how the epidemic will be managed this winter 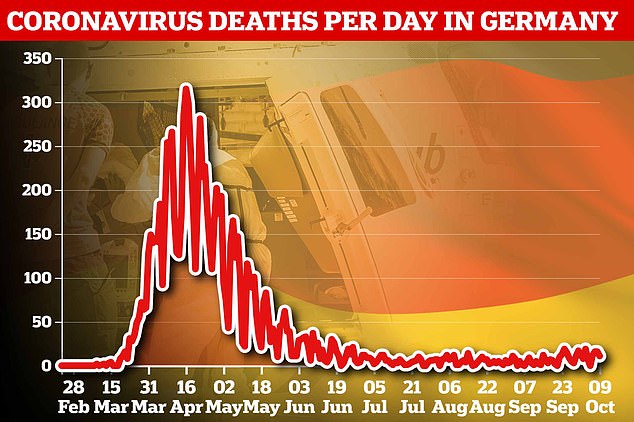 Deaths remain low in Germany, although they have crept up from the very low levels of the summer, with around 80 people currently dying per week 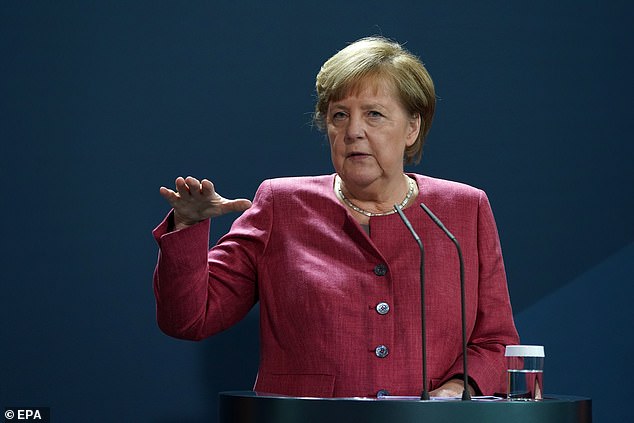 German chancellor Angela Merkel speaks today after agreeing a package of new measures with the mayors of Germany’s 11 largest cities including Berlin, Hamburg and Munich

Germany’s 11 largest cities will impose tougher measures when they cross the threshold of 50 cases per 100,000 people in a week.

The current rates, according to the Robert Koch diseases institute (RKI), are as follows:

According to the text agreed by Merkel and city mayors, the new measures would include:

After weeks of rising infections in Germany, concern has intensified this week after daily cases leaped to more than 4,000 per day for the first time since April.

While hospital cases and deaths have only risen slightly, the average age of newly infected patients has ticked up again in recent weeks.

Merkel, 66, said it was still possible to bring the pandemic under control in Germany, adding that she knew the restrictions were painful.

‘Everything will come back [one day] – partying, going out, having fun without coronavirus rules,’ the chancellor said.

‘My highest priority is – if at all possible – not to have to cut back economic and public life again as was necessary in spring,’ she said.

Schools should stay open to the extent possible, she added.

The new package of measures allows cities to request military help to support their coronavirus response if cases hit 35 per 100,000 in a week.

When they pass the threshold of 50 per 100,000, cities will impose new measures including tougher mask rules in public when social distancing is not possible.

There could also be tighter limits on private gatherings, as well as curfews for pubs and restaurants and limits on alcohol sales.

Some cities including Berlin, Frankfurt and Bremen have already crossed this threshold, according to figures form the Robert Koch Institute (RKI).

City authorities will have the final say on the measures, but Merkel will speak to the 11 mayors again in two weeks to see whether their rules have been effective.

‘We have proven that we can stand together against the virus and we should do that again,’ Merkel said.

Germany has generally been praised for its handling of the pandemic, after keeping its death toll well below that of Britain, France, Spain or Italy.

But the rising infection numbers in cities have led to fears of hospitals being overwhelmed even in Germany’s well-equipped health system. 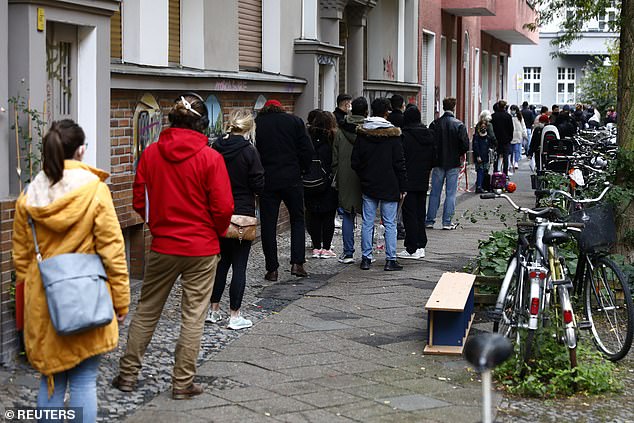 Queuing around the block: People line up in front of a doctor’s surgery to get a coronavirus test in Berlin today, as Germany’s vaunted testing capacity starts to feel the strain 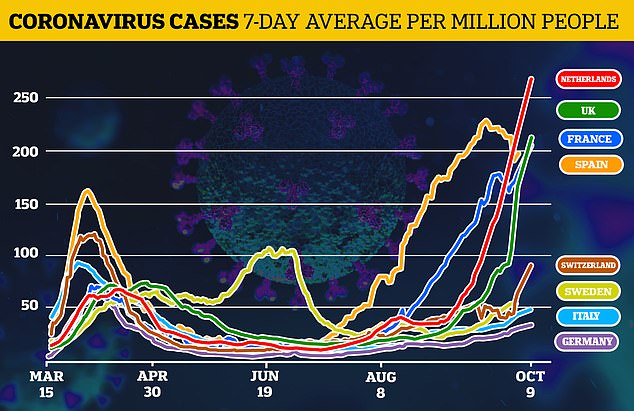 Cases have risen in numerous European countries, with the Netherlands becoming a major new hotspot, although the true picture was likely worse in the spring when testing was limited

Berlin’s mayor Michael Mueller told reporters today that large gatherings had to be avoided and people need to take precautions on public transport.

‘We need to prevent a lockdown,’ he said.

Hospitals have warned of rising numbers of medics, nurses and support staff who are getting sick, taking them out of action when they are most needed.

At the Frankfurt university hospital, twice as many employees caught the virus in the past two weeks as in the three months before, said its medical director Juergen Graf.

‘This will be the bottleneck in the care supply,’ he said.

Germany has plenty of ventilators and intensive care beds, but a lack of staff could be a more pressing problem, he said.

‘The absolute crux of the situation is to not have enough care workers,’ he said.

Non-essential operations and treatments for non-coronavirus patients are already having to be postponed at the Charite due to the shortages, it said.

Germany is also starting to feel the strain on testing capacity, with labs in big cities in Berlin working close to their maximum.

The country has a daily capacity of around 230,000 tests, but there are limits to how much further this can be expanded, an association of German laboratories said.

In Berlin, there have already been long waiting lines outside medical practices as travellers try to get tested. 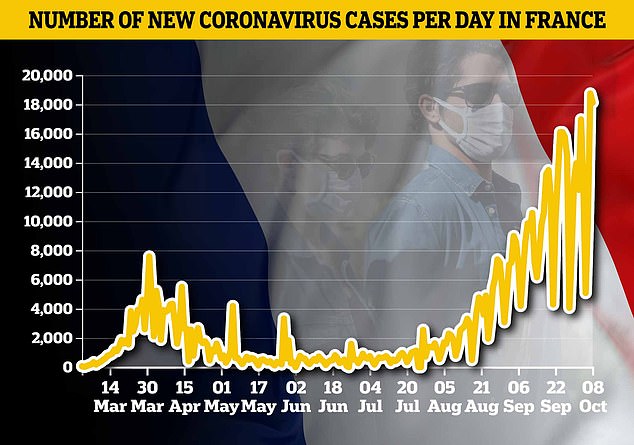 France has seen daily cases spike to record levels, with hospital beds filling up in hotspots such as Paris where bars have been closed and restaurants forced into extra measures 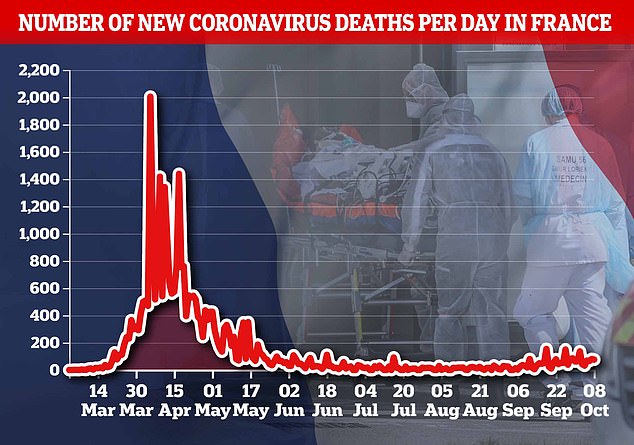 France’s death rate remains far lower than in the spring, although the average figure has risen to 72 deaths per day from 20 only a month ago

Italy has made it compulsory to wear face masks outdoors as new infections jumped to the highest daily tally since April.

The decree was approved at a cabinet meeting on Wednesday after a steady increase in cases over the last two months.

Several Italian regions including Lazio, around the capital Rome, had already made face masks mandatory.

In addition, health minister Roberto Speranza has ordered compulsory testing on travellers from the United Kingdom, Belgium, the Netherlands and Czech Republic.

The cabinet on Wednesday also approved a decree to extend the state of emergency until January 31, making it easier for ministers to take swift action.

Italy today saw more than 5,000 new cases for the first time since April, having not even seen as many as 3,000 for five months until Wednesday.

It brings the total to 343,770 cases and 36,111 deaths in the country, which imposed one of the world’s toughest lockdowns to stop the contagion in March and April.

While Germany tries to fend off a second wave, France is already in the midst of it with around 80,000 new cases being detected per week.

On Thursday, four more cities – Lille, Lyon, Grenoble and Saint-Etienne – were raised to the maximum alert level which already covers Paris and Marseille.

In these places, bars are closed and restaurants have to take additional safety measures that include a minimum distance between tables and registering clients’ addresses to alert them if any fellow diners end up testing positive.

France set a new record of 18,746 cases in 24 hours on Wednesday, although the true figures were likely higher in the spring when testing was limited.

More concerningly, the number of hospital patients is at its highest for three months and pressure on hospital wards is growing in Paris and other cities.

France’s death rate remains far lower than in the spring, although the average figure has risen to 72 deaths per day from 20 only a month ago.

‘The health situation in France, alas, is continuing to worsen,’ health minister Olivier Veran told the nation in a live broadcast.

The Paris health authority warned of ‘a huge wave of cases’ to come, and urged hospitals to place themselves on emergency footing and mobilise extra doctors.

‘We need to throw all our forces into the battle,’ said agency chief Aurelien Rousseau.

On Wednesday, 455 intensive care beds in Paris and its suburbs were occupied by Covid patients – more than 40 per cent of the total.

One French media report said the number was expected to surge to 85 per cent by mid-November, citing a confidential report to Emmanuel Macron. 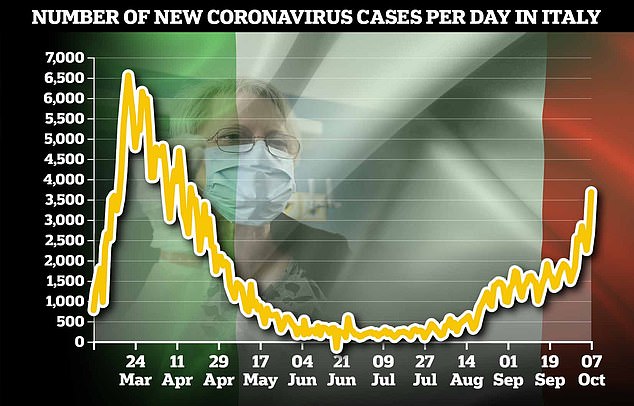 Italy, the first Western country to be battered by Covid-19, has seen cases rise again although not as much as in Britain, Spain or France 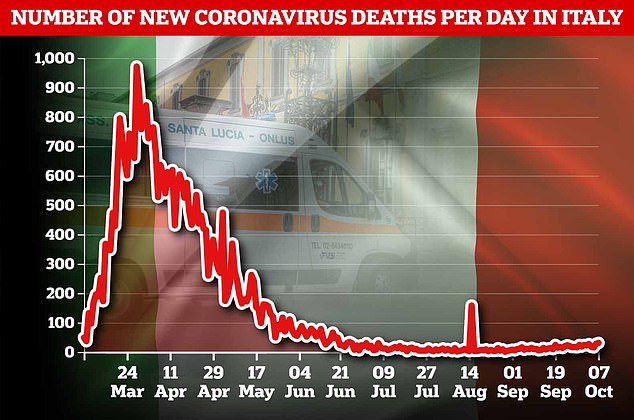 Italy’s deaths also remain low, with 24 people typically dying per day in the last week, compared to the hundreds per day at the height of the crisis in March and April

The step comes after weeks of wrangling between Spain’s left-wing government and the conservative regional authorities in Madrid.

The state of emergency wrests control of health measures back from Madrid authorities, forcing them to restore restrictions on travel which were thrown out by a regional court on Thursday.

The Madrid region’s 14-day infection rate of 563 coronavirus cases per 100,000 residents is more than twice Spain’s national average of 256 and five times the European average.

The measures prohibit non-essential trips in and out of the capital and nine of its suburbs, affecting some 4.8million people.

Restaurants must close at 11pm and stores at 10pm. Both must limit occupancy to 50 per cent of their capacity.

The resistance in Madrid echoes difficulties the French government faced last month when it shut bars and restaurants in Marseille, where elected city and regional authorities reacted with fury.

Meanwhile in Italy, daily cases have returned to levels last seen in April, although infection numbers are still much smaller than in Spain, France or Britain.

Italy, the first Western country to be battered by Covid-19, is desperate to avoid a new lockdown after the economic devastation of of March and April.

While Paris and Brussels have closed bars and Britain has capped pub hours, Italy’s PM Giuseppe Conte has said that bars will stay open there.

However, a new outdoor mask mandate went into effect on Wednesday, with fines of up to €1,000 for people who break the rules.

Even at home, Conte urged Italians to keep their distances with relatives, given most new infections are occurring within families.

‘The state can’t ask citizens to wear masks in their own homes,’ Conte said. ‘But we have a strong recommendation for all citizens: Even in our families we have to be careful.

‘We have to be more rigorous because we want to avoid at all cost more restrictive measures for production and social activities,’ Conte said.

Italy has expanded testing capacity to around 120,000 per day, double what it could process in the spring, but experts say it may need to increase the level further.

The Vatican, which followed Italy’s strict lockdown in spring and summer, also imposed an outdoor mask mandate this week in the tiny city-state.

Elsewhere, the Netherlands has become a new hotspot with the Dutch test-and-trace system failing to keep pace with rising infections.

A surge in new cases has catapulted the per capita infection rate into the top 10 in the world, with a weekly infection rate of around 160 cases per 100,000 people.

‘We don’t have our basic infrastructure in order’, public health professor Jochen Mierau said this week.

‘There is a shortage of tests, while Germany has more than enough to even test people without symptoms.’