Hundreds of candles have been lit to form a giant cross in memory of over 4,000 coronavirus victims in Germany, as the country declares its crisis is ‘under control’ as the rate at which new people are being infected fell below a key milestone.

Gertrud Schop, 60, who is a catholic and works as a tax adviser, lit the candles on her property in Zella-Mehlist on Friday as a symbolic gesture while church services are temporarily banned in the country during the lockdown.

She plans to continue the project until a coronavirus vaccine is made available.

It follows Health Minister Jens Spahn saying on Friday that a lockdown introduced on March 18 ‘was successful’ and that infection numbers have ‘sunk significantly’ since then.

He spoke shortly after the Robert Koch Institute reported that the ‘reproduction rate’ of the disease in Germany had fallen to 0.7.

The reproduction rate, also known as ‘R’, is the number of people that a coronavirus carrier infects on average before they stop being infectious.

An ‘R’ rate of 1 means the number of new cases has stabilised, while a rate of less than 1 means the disease has gone into decline and new cases will begin falling.

It is considered a key milestone in breaking the back of an outbreak.

Candles form a giant cross in memory of coronavirus victims in Germany in Zella-Mehlist on Friday. Tax advisor Gertrud Schop and volunteers lit close to 4000 candles in the symbolic gesture which took seven hours to complete 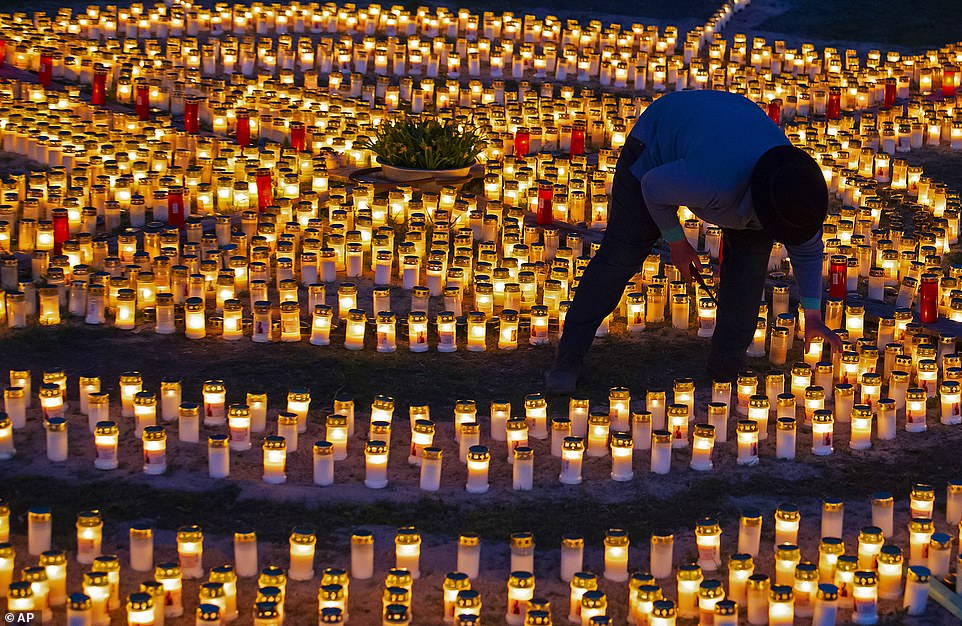 Tax adviser and Catholic Gertrud Schop lights candles forming a giant cross in Germany. Despite optimism of the crisis being ‘under control’, another 299 deaths were reported in the country, bringing the total from 3,569 to 3,868 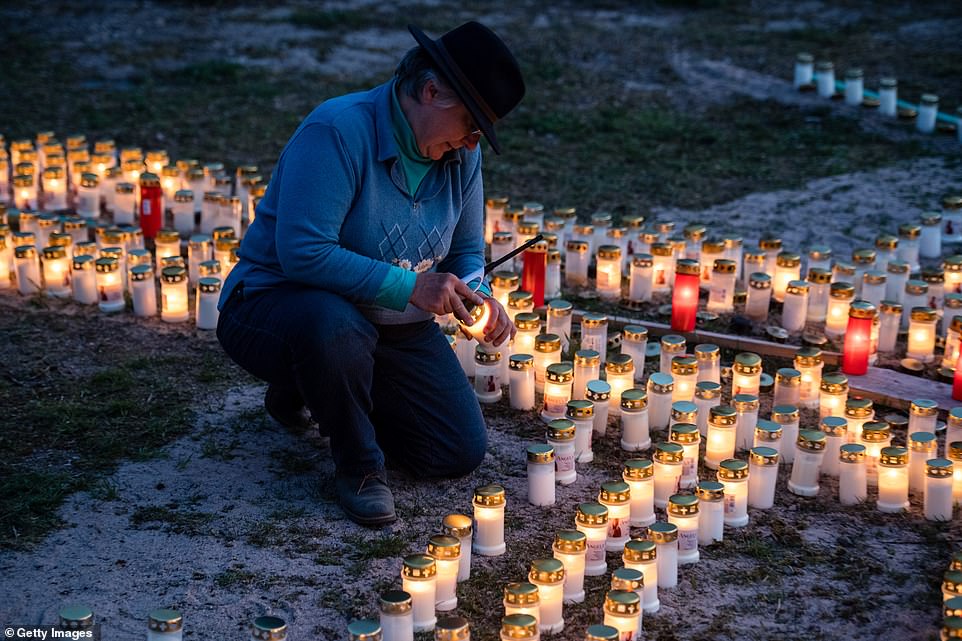 Ms Schop, 60, lighting the candles in the shape of a cross on her property in Zella-Mehlis, Germany. Schop says she wants to make a symbolic gesture towards the victims as church services have been temporarily banned as part of lockdown measures 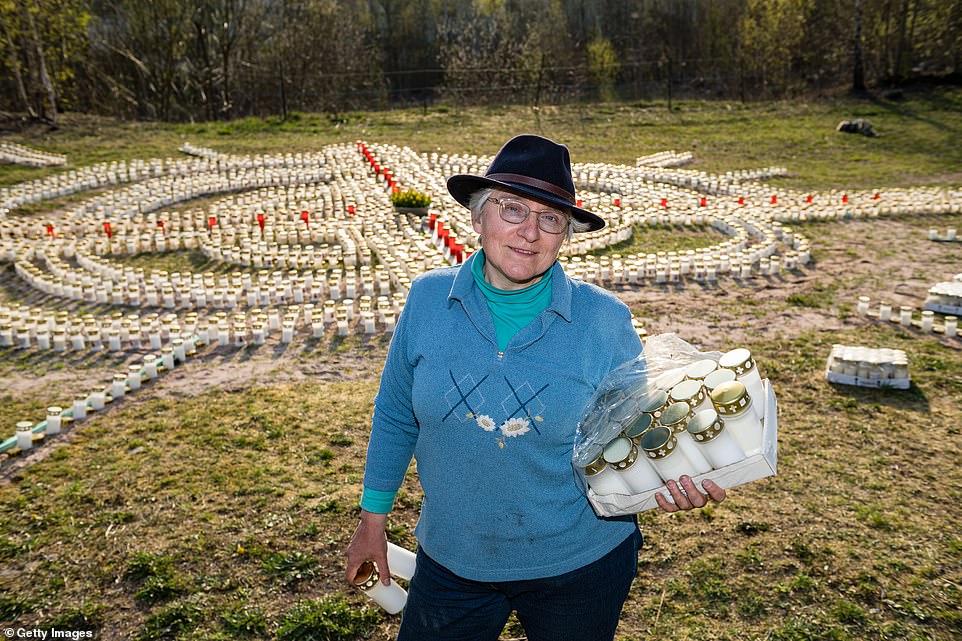 Ms Schop poses for a photo in front of the cross formation while holding a box of the candles, before they are all lit. She says she plans to continue the project until a coronavirus vaccine is made available

‘The outbreak has – as of today – become controllable and manageable again,’ Spahn told a news conference, adding that the health care system had ‘at no time been overwhelmed so far’.

His optimism came despite researchers registering 3,380 new infections, bringing the total number of cases from 130,450 to 133,830.

The figure marks the largest daily increase for six days.

Meanwhile another 299 deaths were reported, bringing the total from 3,569 to 3,868. It marks the country’s second-deadliest day of the outbreak so far.

Speaking about the importance of the R figure on Wednesday as she relaxed some of Germany’s lockdown measures, Chancellor Angela Merkel said: ‘The curve (of infections) has got flatter, but it still has to be in a shape that doesn’t overburden our health system.’

With an infection rate of around 1.0, she and state premiers judged the time right to begin inching out of lockdown.

But ‘even if we assume that one person infects 1.1 others, we would reach the limits of what our health system and intensive care beds can manage in October,’ she said.

‘If we assume a rate of 1.2… we would reach the health system’s limit in July. 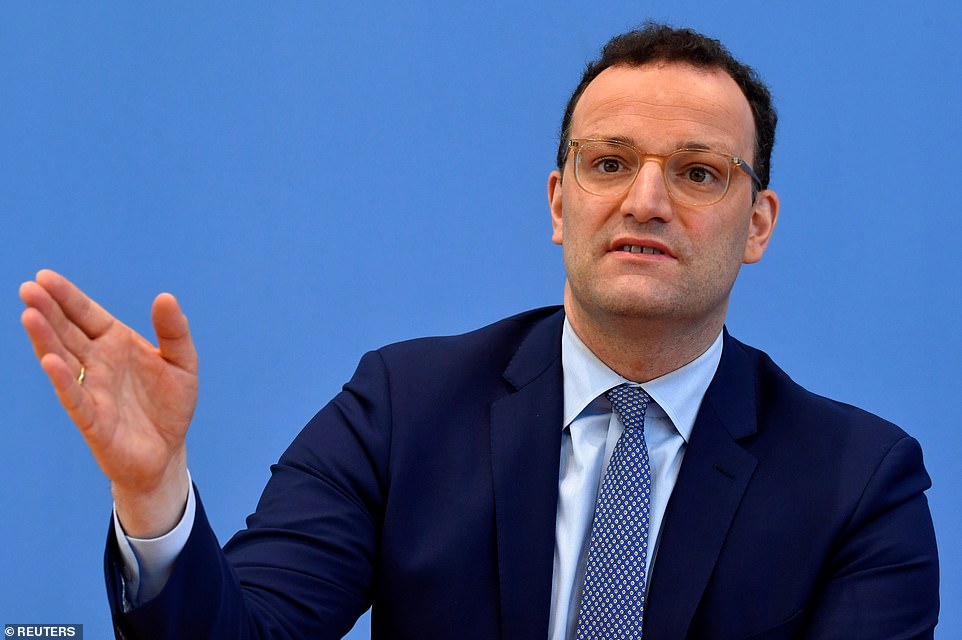 German Health Minister Jens Spahn declared coronavirus ‘under control’ on Friday, as it was revealed the average German patient now infects less than one other person 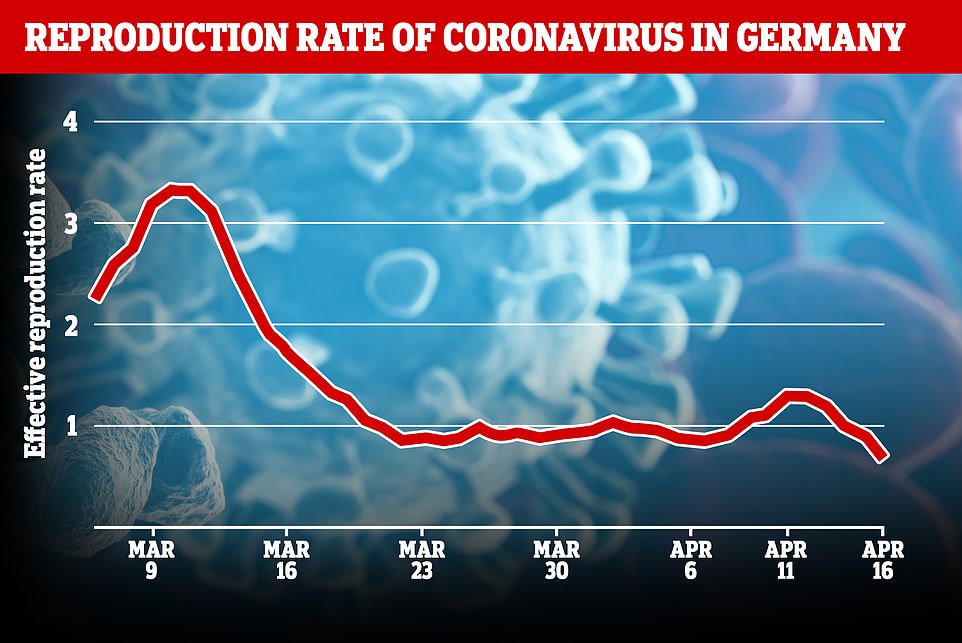 The ‘reproduction rate’ of coronavirus in Germany – often known as ‘R’, or the number of people the average patient infects – has fallen to 0.7 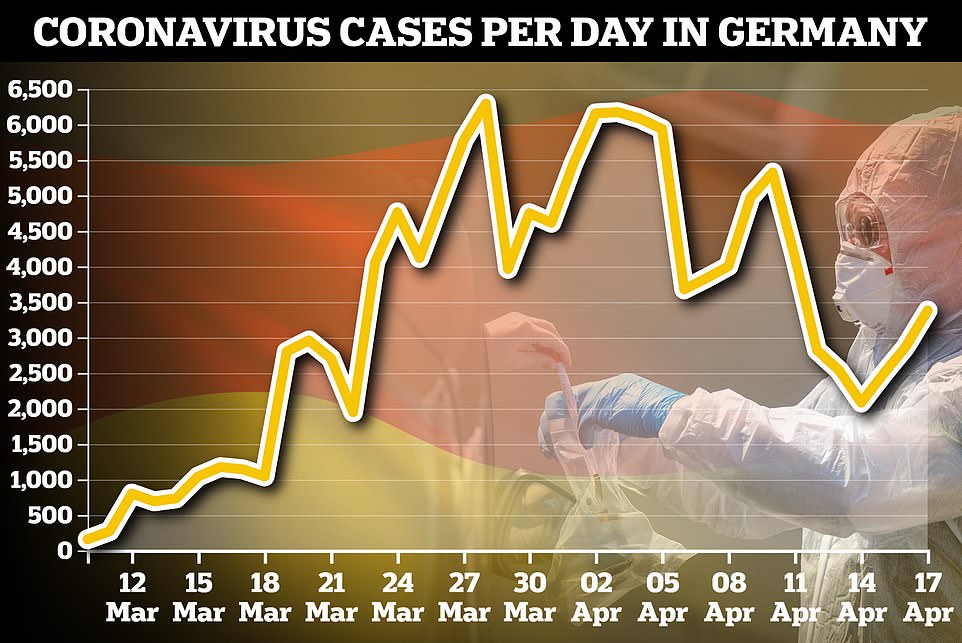 Mr Spahn’s optimism came despite a slight uptick in cases – including 3,868 reported on Friday, the largest daily increase for six days

‘You can see how little margin for error we have’ when tweaking the step-by-step lockdown exit, Merkel said, adding that ‘caution should be the watchword, not over-confidence’.

Meanwhile the government has announced that a coronavirus contact tracing app – which tells people when and where they may have come into contact with an infected person – will be ready to download in three to four weeks.

The app will allow infected people to voluntarily upload data revealing their movements so that people who came into contact with them can get tested.

It mirrors similar apps deployed in South Korea – which quickly succeeded in flattening its curve of coronavirus infection – which send notifications to people’s smartphones when they went close to an infected person.

South Korea’s government has been widely praised for its coronavirus response, thanks in large part to its mass testing and contact tracing approach.

Germany has also been praised for its testing regime, but strict privacy laws have meant it has been reluctant to adopt the kind of contact tracing methods used in South Korea.

Developers are working hard on an app to make sure data protection standards are ‘as perfect as possible’, Health Minister Jens Spahn told broadcaster ARD.

Despite the upswing in cases, Chancellor Angela Merkel announced Wednesday that Germany will begin to ease its coronavirus lockdown starting next week.

Smaller shops are set to reopen first, while schools will follow in early May.

But Ms Merkel has warned that masks should be worn on public transport and in shops.

‘It is recommended that masks be used in public transport and while shopping,’ she told journalists after talks with regional leaders from Germany’s 16 states. 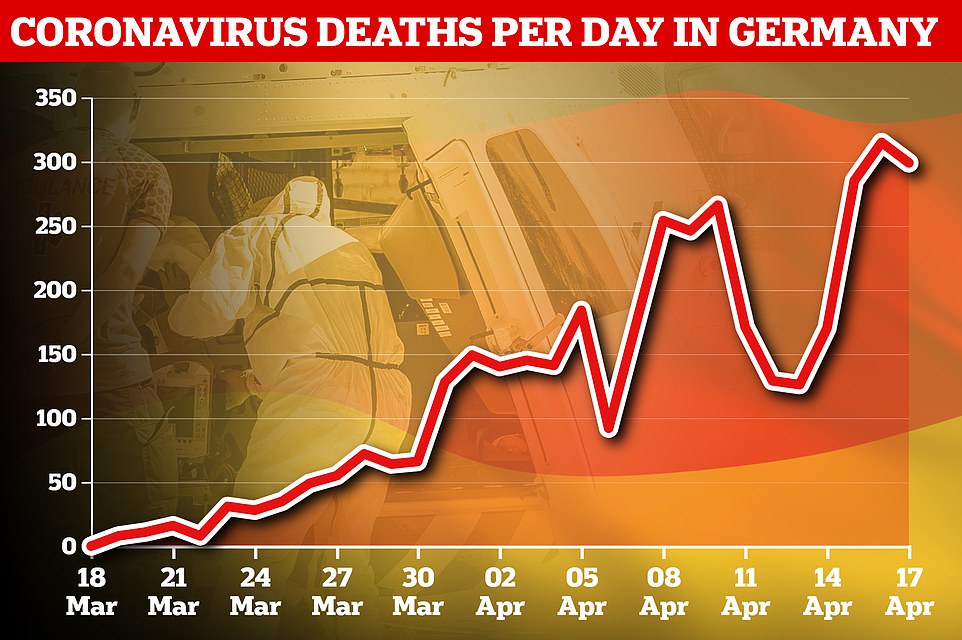 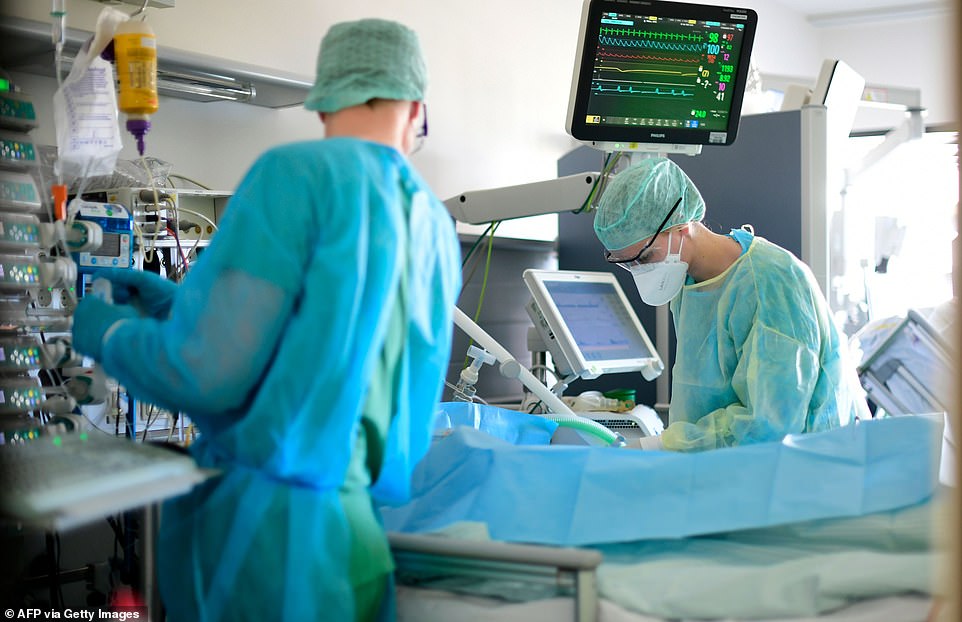 Medics treat a coronavirus patient in the intensive care unit of a hospital in Aachen, in the west of the country

Following the much-anticipated talks, Ms Merkel set out a plan for the first steps of a cautious restart of public life – following neighbouring Austria and Denmark and other countries in launching a slow loosening of restrictions.

New infections in Germany have slowed in recent weeks, with the country having now recorded more 133,000 cases of coronavirus.

There have been 3,254 coronavirus-related deaths in Germany, though 285 more deaths were recorded yesterday, the biggest daily spike the country has seen so far.

But despite beginning to lift restrictions, Ms Merkel cautioned that the country has achieved only ‘a fragile intermediate success’ so far and does not have ‘much room for manoeuvre.’

She said a ban on gatherings of more than two people in public and an obligation to keep at a 1.5-metre distance from others, which has been in place since March 23, will remain in place.

The measures were set to expire on Sunday.

Nonessential shops, which have also have been closed for nearly four weeks, will be allowed to start reopening, with hygiene precautions, if they are up to 800 square metres in area.

Car showrooms, bike shops and bookshops, irrespective of their size, will be allowed to open.

Ms Merkel said the decisions apply to the period from Monday though May 3, and officials will review the situation again on April 30.

Schools, which have been closed since mid-March, will begin to reopen step by step from May 4, with the oldest students returning first.

State governors and Germany’s interior minister will hold talks this week with religious communities on what to do about religious gatherings, which have not been allowed in recent weeks, Ms Merkel said.

It remains unclear when bars, cafes and restaurants – which also are closed, apart from for takeouts – will be allowed to reopen.

‘We are moving forward in small steps and must see what effect they have,’ Ms Merkel said.

As reported earlier by the MailOnline, a panel of academics has advised Ms Merkel to re-open primary schools ‘as soon as possible’ as the number of infections loses pace.

Germany had a setback today when 285 more deaths were added to the tally, the biggest daily spike so far. 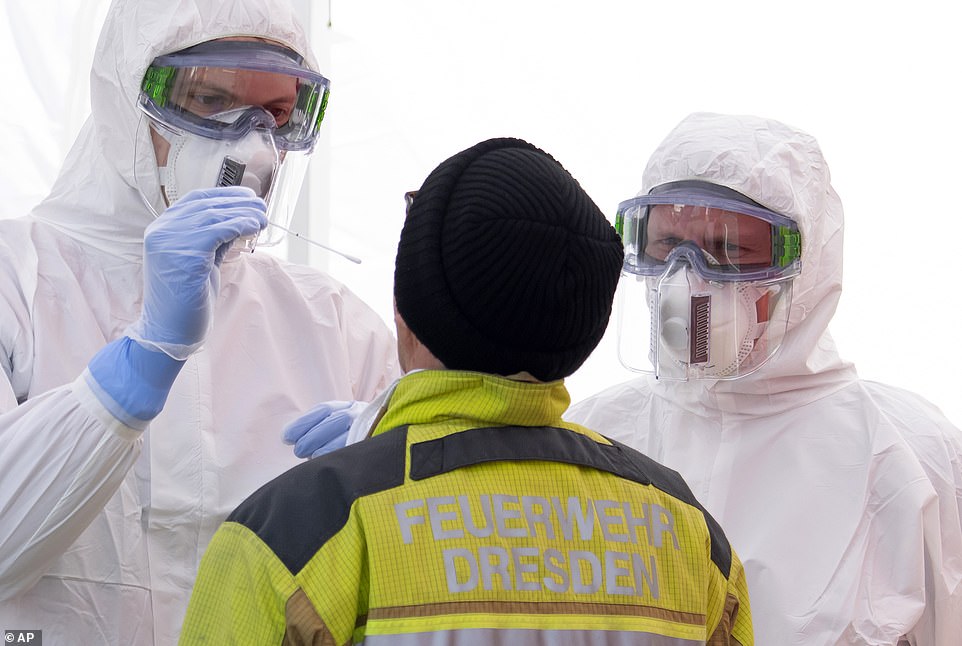 Workers for the German Red Cross take a coronavirus swab test from a fireman at a drive-through testing site in Dresden, eastern Germany 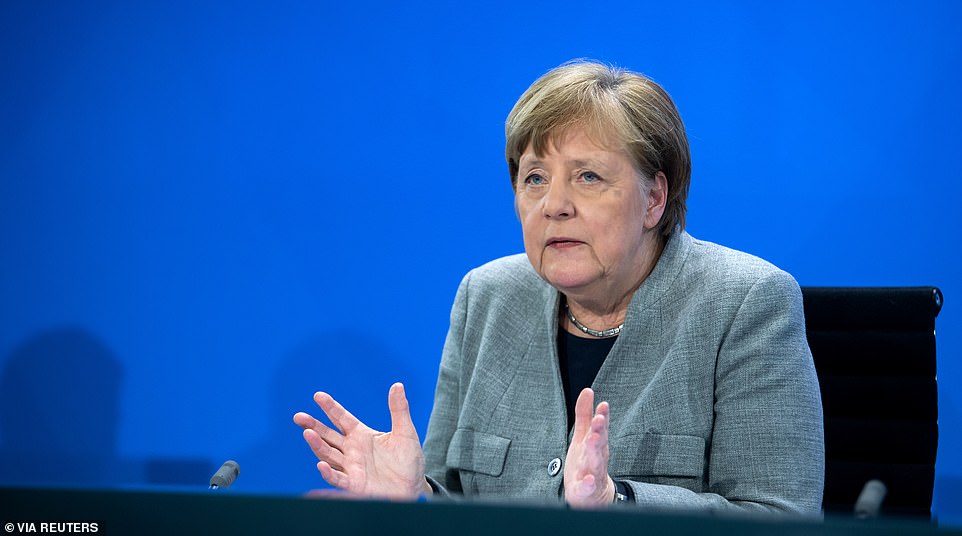 Despite the rising figures, Chancellor Angela Merkel has announced that lockdown restrictions will be eased started next week – with small shops set to reopen first

Experts warn that the time lag between infection and death means a country’s death figures may continue to worsen even once the number of cases slows down.

In addition, many countries have had inflated figures at the start of the week because of a weekend backlog, a problem which may have been exacerbated by the long Easter weekend.

The number of new infections today was 2,486, higher than yesterday’s 2,082 but still the second-lowest figure since March 22.

Germany also has a keen eye on the rate of contagion, known as R, which shows how quickly the virus is spreading.

The rate is currently around 1.2, meaning that each person with the virus infects another 1.2 people on average.

‘It is really in our interest that this R rate goes below 1, or is at 1. That is an important factor,’ said Lothar Wieler, head of the Robert Koch diseases institute.

‘We can’t speak of containment yet – we still have high numbers each day. We are seeing a slowdown,’ he said.

Today’s changes come after Ms Merkel met the leaders of Germany’s 16 states to discuss a possible way out of the lockdown.

In recommendations sent to Ms Merkel, an influential group of academics called for schools to re-open ‘as soon as possible’.

The Academy of Sciences Leopoldina suggests that children could return to school in classes of no more than 15 at a time in order to enforce social distancing.

Nicknamed the ‘Merkel whisperers’, the panel of experts have called for a ‘gradual resumption of economic and social activity’ as the epidemic eases.

One proposal includes re-opening schools gradually from May 4 with priority given to primary and secondary pupils in final years. Schools must prepare a hygiene plan before they reopen their doors. 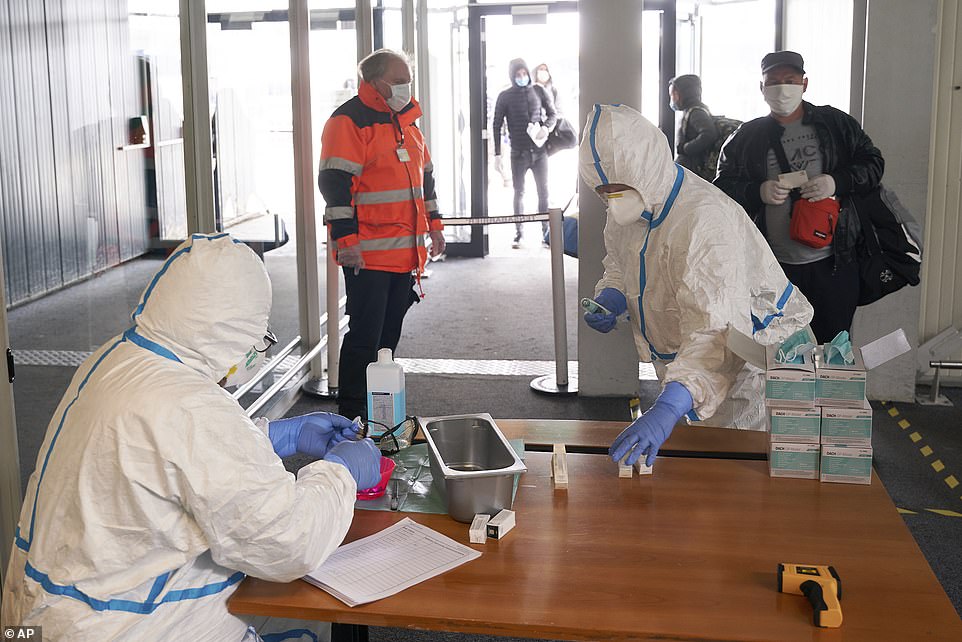 Kindergartens and primary schools should re-open first because parents of younger children will benefit more from the resumption of daily childcare, the experts say.

There would also have to be staggered break times so that the school playground does not become a breeding ground for the virus, they warn.

Children should initially study a bare-bones curriculum of German, maths and foreign languages as schools make a gradual return to normality, they suggest.

However, universities and other higher education institutions should stick to online teaching for the summer term, the experts advise.

RKI chief Wieler said there were ‘no major differences’ between his view of the situation and the Academy’s, apart from ‘small details’ such as which age groups should return to school first.

‘There is still no blueprint’ for how to reopen a society and economy after the virus lockdown, he added, and ‘not always a right and wrong’ answer.

Merkel has said that the Academy’s position paper will be important for her determination on the path forward. 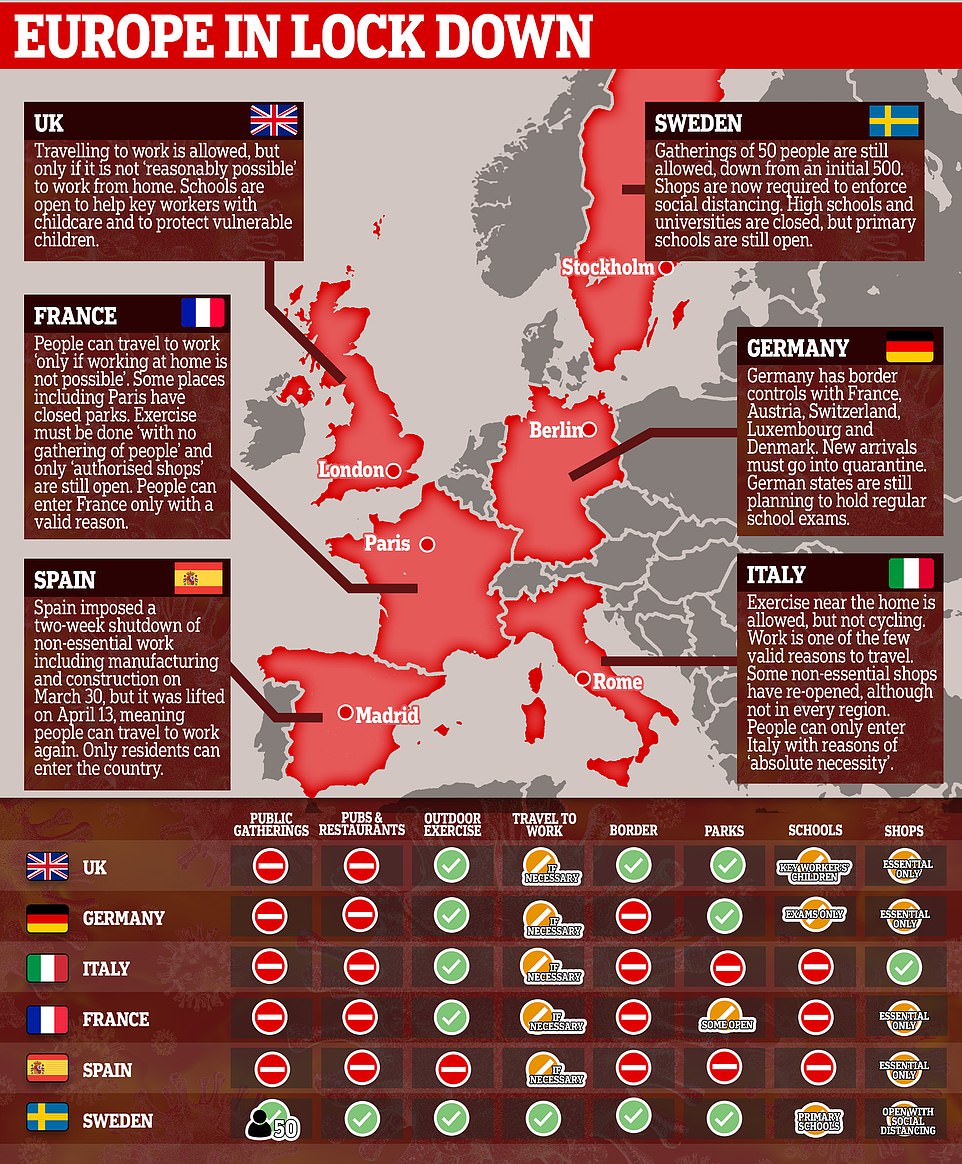 This diagram shows the different containment strategies in six European countries. Germany’s lockdown is among the less stringent of the six

Germany has also closed shops, restaurants, playgrounds and sports facilities, and many companies have shut to aid the fight against the coronavirus.

Berlin mayor Michael Mueller told broadcaster RBB yesterday that the lockdowns could be relaxed ‘at the earliest from April 27, or possibly from May 1’.

Much of the early decision-making was left to Germany’s 16 states, of which Berlin is one.

Federal economy minister Peter Altmaier declined to name a date for the relaxation of restrictions.

‘The next few days will bring clarity,’ he said on breakfast television, adding that the government was keenly aware of the risks of lifting restrictions too early only to have to impose a full lockdown later.

‘If the impression arises that there is to-ing and fro-ing, it would damage trust in politics and harm the peoples’ willingness to be disciplined and to cooperate,’ Altmaier said. ‘We have to consider every step.’

Neighbouring Austria has already taken steps out of the lockdown, opening small shops yesterday with a view to opening larger ones on May 1.

However, schools in Austria are set to remain closed until mid-May along with hotels and restaurants.