A 27-year-old German woman is suspected of smothering five of her children as she was feeling ’emotionally overwhelmed’, investigators said Friday, a day after the lifeless bodies were found in their family apartment.

The woman, known only as Christiane K, lived in the Solingen in North Rhine-Westphalia.

She then attempted suicide by throwing herself under a train, before being rescued with serious but not life threatening injuries, said lead investigator Marcel Maierhofer.

She is believed to have ‘carried out the act while she was feeling emotionally overwhelmed, and that too is the motive,’ said the investigator.

Christiane K.’s sixth and eldest child, Marcel, 11, was unharmed and is now being looked after by his relatives (pictured: the mother kissing her eldest) 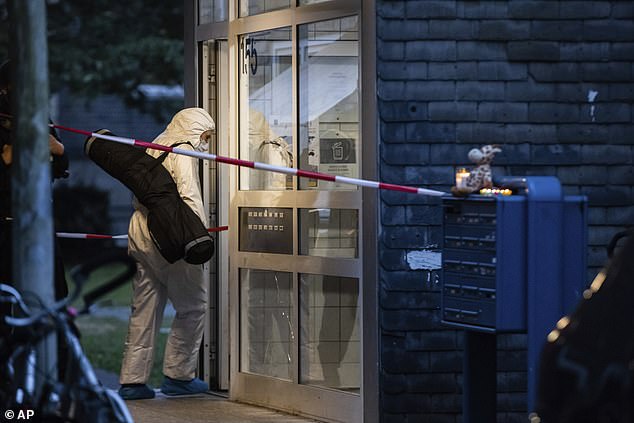 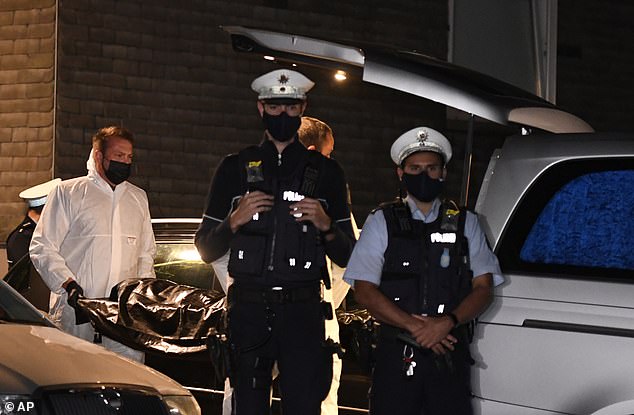 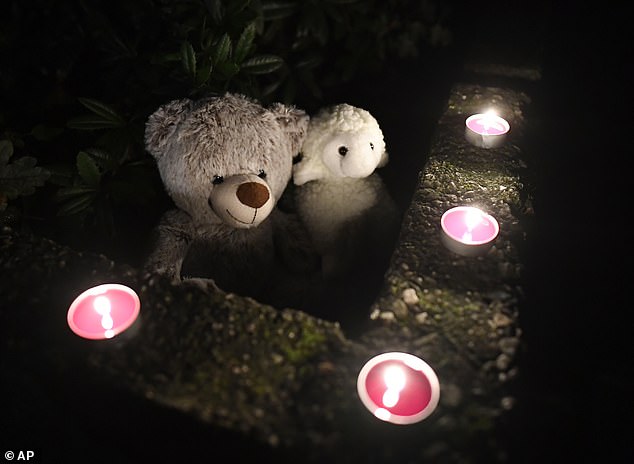 Police believe that the three girls aged one, two and three, and two boys aged six and eight were sedated and then smothered to death either on Wednesday or Thursday.

A sixth child, aged 11, survived. He had told schoolmates in a group chat that all his siblings were dead, said investigators.

He was likely able to avoid the grim fate of his siblings because he was in school at the time of their killing, said Maierhofer.

Police found the bodies in the suspect’s apartment in the city of Solingen in North rhine-Westphalia state after they were alerted by the suspect’s mother, who had herself learnt of her grandchildren’s fate from her daughter.

The suspect is believed to be emotionally distressed after a separation from her third husband a year ago.

The man is the father of four of the six children. 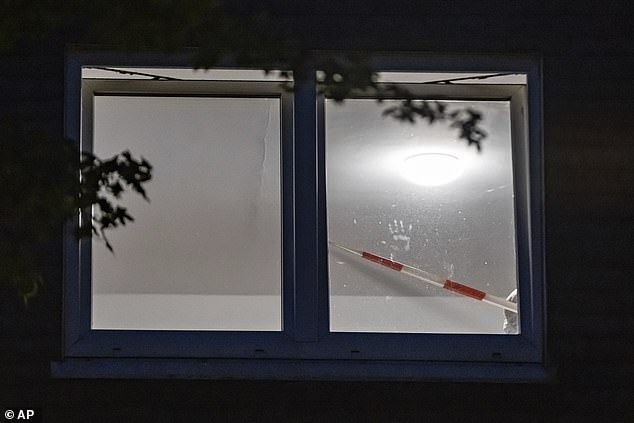 A policewoman stands in front of the apartment building in Solingen, Germany, on Thursday night

Police said they were alerted by the children’s grandmother in nearby Moenchengladbach, who had recently been in contact with the mother.

‘We were informed shortly before 2pm that five children had died and this has unfortunately been confirmed,’ police spokesman Stefan Weiand said.

‘At the moment we believe that the 27-year-old mother appears to be responsible,’ he added.

The mother was not at the apartment when they arrived at the scene, they said. She is now in hospital but not yet in a fit state to speak to police.

Asked about reports that medication was involved in the children’s deaths, Weiand said: ‘We are investigating in that direction.’

Rescuers themselves were said to be traumatised by what they found in the building, and also shocked by the state of the flat.

One report said that rescuers had tried to resuscitate the children but arrived too late to save their lives.

Detectives are now awaiting the results of toxicological tests on the children, who did not have any visible injuries.

After leaving the apartment, 11-year-old Marcel travelled with his mother to Duesseldorf and continued on alone to his grandmother in Moenchengladbach.

It is unclear whether he witnessed his mother’s suicide attempt.

The woman was rescued from between two track beds and taken to a local hospital for treatment, emergency services said.

German railway operator DB said there were temporary closures in Dusseldorf because an emergency doctor had been needed on the track.

The bodies were discovered at an apartment building in Solingen, 20 miles from Cologne in western Germany

Several police officers could be seen around the apartment building in the early evening, along with ambulances and police vehicles in a cordoned-off area.

Police said more than 40 officers were dispatched to the scene.

‘The family tragedy in Solingen fills me with great sadness and at the moment my thoughts and prayers are with the five small children whose lives were snatched from them so terribly early,’ said Herbert Reul, interior minister for the state of North Rhine-Westphalia.

Tim Kurzbach, the mayor of Solingen, said: ‘I am shocked and deeply saddened by the news that five dead children have been found in our city.’

Solingen is a city of 160,000 people around 20 miles from Duesseldorf and Cologne.

For confidential support call the Samaritans in the UK on 08457 90 90 90, visit a local Samaritans branch or click here for details.

German police have found the bodies of five children in a building in the town of Solingen (pictured, emergency vehicles in front of the house)

The balcony of an apartment at the Solingen residential block, where emergency rescuers were said to be traumatised by what they found