German health minister Jens Spahn is said to be ‘fighting for his career’ after overseeing a shambolic vaccine roll-out, clashing with Angela Merkel and failing to deliver on a promised rapid-testing scheme.

Spahn, who only months ago was being feted by those marvelling at Germany’s early success against the pandemic, has seen his approval rating slide five points in a month amid the vaccination chaos and a grinding two-month lockdown.

Merkel’s decision to postpone the rapid tests which Spahn had promised to bring in by March 1 has prompted talk of ‘revenge’ in German media – after the chancellor accused him of trying to shift the blame for the vaccine fiasco to Brussels.

With Bild now describing Spahn as a ‘ministerial flop’, the 40-year-old – who was seen as an outside contender in the race to succeed Merkel as chancellor later this year – is said to be ‘frustrated’ and ‘bewildered’ by the setbacks to his career.

Face to face: Angela Merkel, right, speaks to her under-fire health minister Jens Spahn on the benches of the Bundestag in Berlin 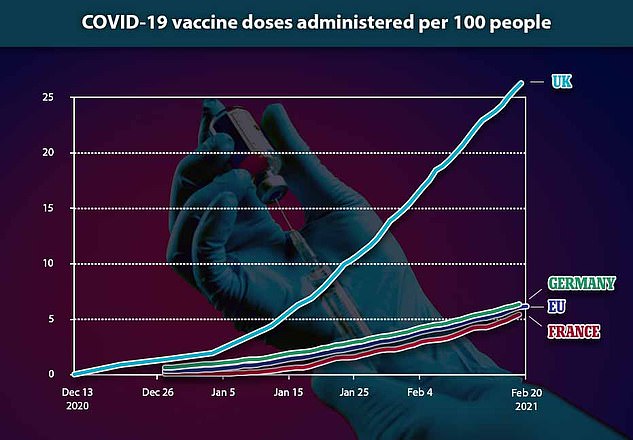 This graph shows how the UK has outpaced the EU, including wealthy Germany and France, in administering the vaccines that will open the door out of lockdown

Like the rest of the EU, Germany is lagging far behind the UK in its vaccine roll-out – with Merkel’s government under fire for delegating the task to Brussels.

While Britain has given out 27.0 doses per 100 people, Germany has managed only 6.2, only fractionally above the EU average.

Spahn’s promises of five million doses by the end of January and a jab for all care home residents by the middle of February were also not met.

A leaked letter last month revealed how Spahn and some of his fellow health ministers had handed the vaccine task to the European Commission last June.

But according to Bild, that led Merkel to suspect that Spahn had organised the leak in order to deflect blame for the slow progress being made in Germany.

Merkel is since thought to have brought responsibility for the vaccine programme into the chancellor’s office, limiting Spahn’s authority.

Spahn has also come under fire from rival parties including Merkel’s Social Democrat coalition partners and the opposition Greens.

And he suffered further humiliation this week when his plan to roll out rapid testing from March 1 was torpedoed by Merkel’s office.

The rapid-testing plan will now merely be discussed at talks between Merkel and state premiers on March 3, the chancellor’s spokesman said. 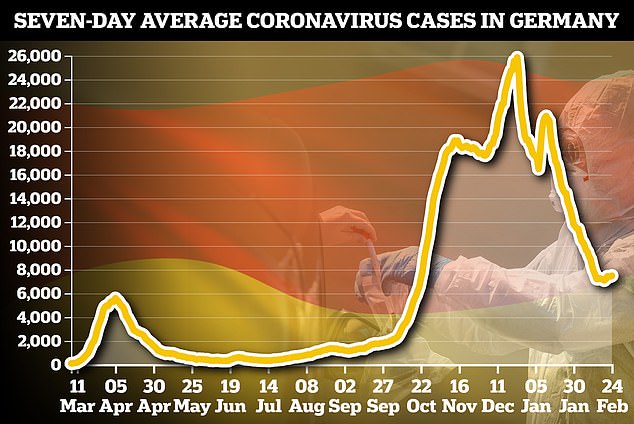 A two-month ‘hard lockdown’ has brought Germany’s infection rate down, but progress has now stalled with cases on the rise again in the last week 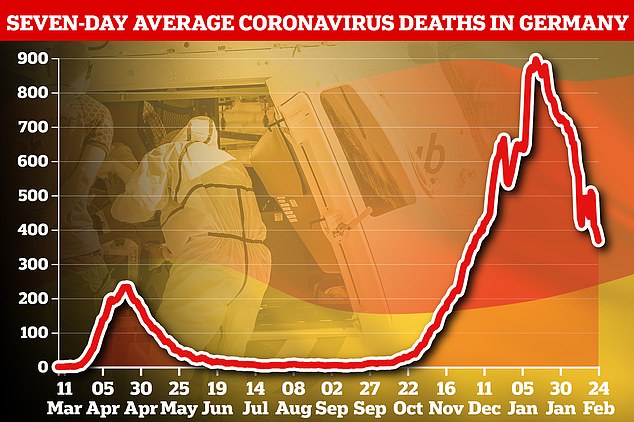 The death rate has fallen from its January peak but is still higher than during the first wave, when Germany was celebrated for keeping deaths low

As recently as last week, Spahn had promised that the publicly-funded tests would be available from March 1 in pharmacies and local testing centres.

‘These testing options can contribute to a safe everyday life, especially in schools and daycare centres,’ Spahn had said.

The government’s popularity has also been hit by the prolonged lockdown which has turned Germany’s success of last spring into a much bleaker picture this winter.

After seeing fewer than 10,000 deaths during the first wave, Germany’s death toll is now above 68,000 and a weeks-long decline in cases has now come to a halt.

Spahn’s approval rating, which was 65 per cent in November, has dropped to 51 per cent as of February – far below Merkel on 69 per cent.

The various crises have also damaged Spahn’s outside hopes of succeeding Merkel as chancellor when she ends her 16-year term in office later this year.

At a party congress last month he suffered what was seen as an embarrassingly poor result in a deputy leadership election, although he did win one of the five slots.

He was also criticised for an overly partisan speech supporting Armin Laschet, the premier of North Rhine-Westphalia who was elected CDU party chairman.

Laschet’s victory was not the final word on who will lead the party into the September election, and Spahn was still seen as one of the contenders. 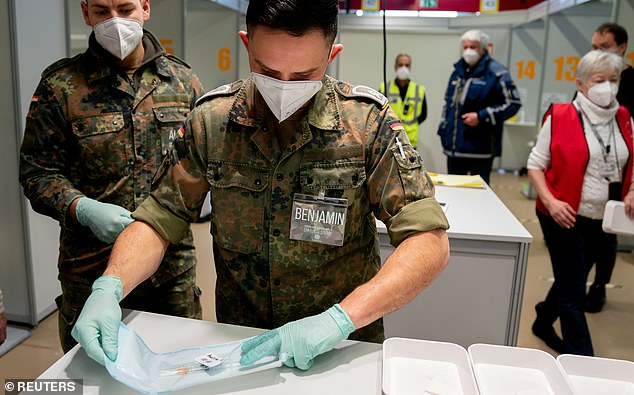 German soldiers prepare AstraZeneca vaccines at a former Berlin airport earlier this month, amid widespread reluctance to take the jab despite its proven effectiveness

An economic liberal and openly gay Catholic, he was critical of Merkel’s open-door policy during Europe’s 2015 migrant crisis and was supported by some in the CDU.

But recent polls have shown him performing poorly, with one showing only seven per cent saying he would have the best chance in the election.

Hoping to turn around the vaccine drive, Spahn has now requested that the AstraZeneca shot be given to the police force and German army.

The AstraZeneca vaccine has met resistance in Germany and other European countries after widely-debunked claims about its efficacy in older people.

There have also been anecdotal reports that the AstraZeneca vaccine causes stronger side effects than other vaccines.

Of the 1.5million AstraZeneca shots due to have been delivered by the end of last week, only 187,000 have been used so far, according to official figures.

But German leaders have now launched a public relations push to reassure the public that the AstraZeneca shot developed at Oxford University is effective.

‘The vaccine from AstraZeneca is both safe and highly effective,’ Merkel’s spokesman Steffen Seibert said on Monday. ‘The vaccine can save lives.’

Spahn also wants to start administering vaccines at family doctors’ practices as soon as three to five million doses are being delivered weekly.

That would help ease potential bottlenecks at the regional vaccination centres that have been set up by Germany’s 16 federal states.