Georgia’s secretary of state has announced that votes in Fulton County, home of Atlanta, are being rescanned after officials ‘discovered an issue’, as the Trump campaign filed a law suit in Arizona and Lindsey Graham urged an investigation in Pennsylvania.

Brad Raffensperger, Georgia’s secretary of state, said at 5:38pm on Saturday that the count was being rescanned, in the district.

Georgia is no longer essential for Joe Biden to claim victory: on Saturday morning he crossed the finishing line when Pennsylvania was called for him.

‘Fulton has discovered an issue involving reporting from their work on Fri,’ said Raffensperger in a tweet.

‘Officials are at State Farm Arena to rescan that work. I have a monitor & investigators onsite.

‘Also sent Dep. SOS as well to oversee the process to make sure to secure the vote and protect all legal votes.’ 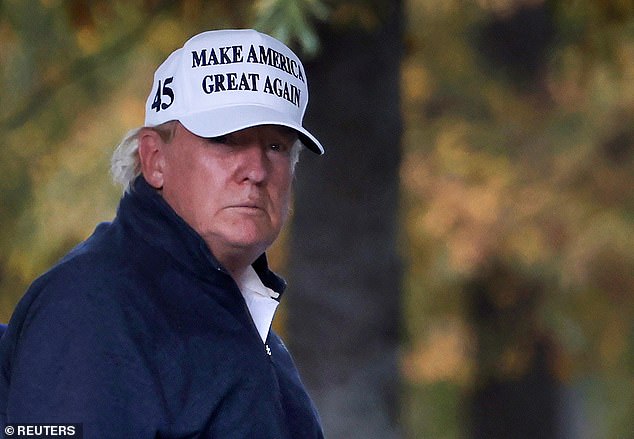 Donald Trump is pictured returning to the White House on Saturday 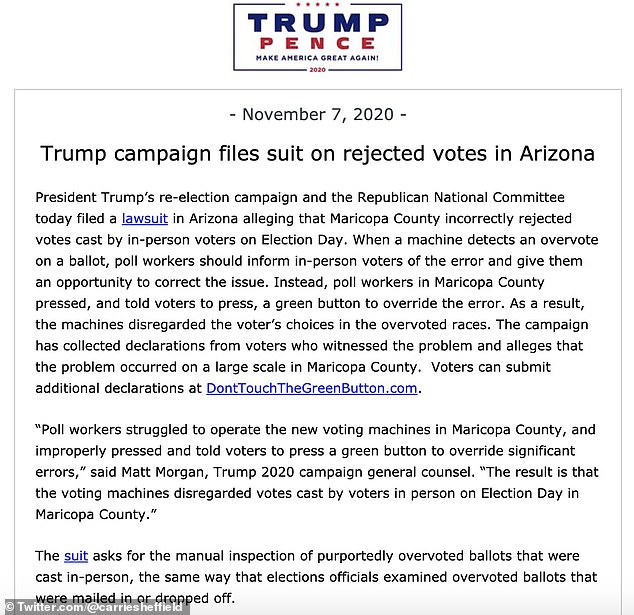 His announcement came as the Trump campaign announced yet another lawsuit – this one in Arizona.

AFTER THE ELECTION: THE DATES YOU NEED TO KNOW

NOVEMBER 23: All swing states election results are certified by this date

DECEMBER 8: ‘Safe harbor’ deadline which means the statutory deadline for resolving disputed results. If the states have followed correct procedures, whatever the result is on Dec. 8 stands, even if one side still disputes it

DECEMBER 14: Electoral college electors are chosen and sworn in

JANUARY 20: At midday the new president is sworn in and assumes all of the powers of commander-in-chief – including the ability to direct the Secret Service and U.S. Marshals to remove unwanted White House guests

Arizona, with a Republican governor, has been a bone of contention for the Trump campaign since it was called by Fox News and AP for on Tuesday night.

Except for Bill Clinton’s win in 1996, Arizona has voted Republican since 1952.

The Trump campaign alleged in their suit that Maricopa County officials incorrectly rejected votes cast by in-person voters on Election Day and disregarded the voter’s choices in ‘over-voted’ races.

An ‘overvote’ happens when you vote for more candidates than the number of candidates you are permitted to vote for.

The Trump campaign claimed that voters who accidentally chose too many candidates were not informed by poll workers of their error, and offered the chance to try again.

Lindsey Graham, the chair of the Senate Judiciary Committee, also said on Saturday that he wanted an investigation into events in Pennsylvania.

The 65-year-old staunch supporter of the president said that he had received a sworn affidavit from Richard Hopkins, a postal worker in Erie, Pennsylvania, alleging that postal workers were told to stamp ballots with a November 3 date, even if they arrived late.

His complaint was first made to Project Veritas.

‘As Chairman of the Senate Judiciary Committee, I will not allow allegations of voting irregularities and misconduct to be swept under the rug,’ he said.

‘The expanded use of mail-in voting is making the post office the administrator of elections, not the local elections officials.

‘Officials in Pennsylvania should take allegations from Mr. Hopkins and others seriously before certifying a final outcome.’ 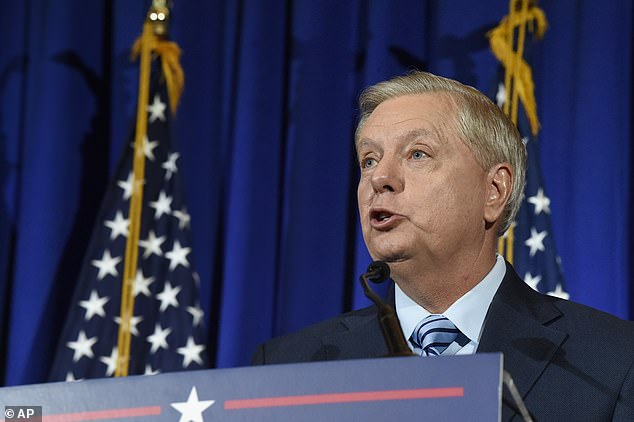 Lindsey Graham, chair of the Senate Judiciary Committee, called for an inquiry in Pennsylvania 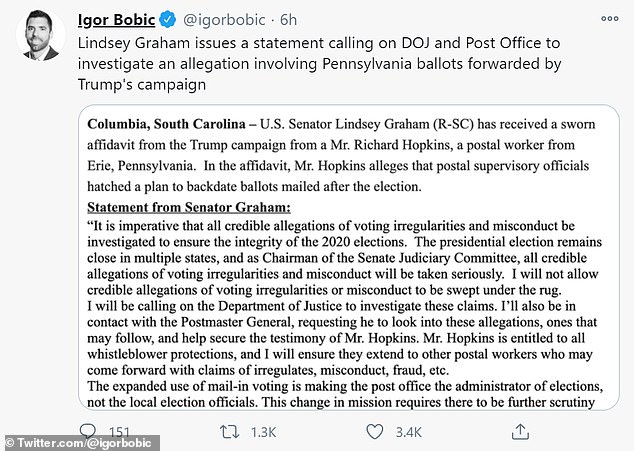 The legal battles will run their course over fall and winter, but ultimately will run into hard deadlines set by the law and the Constitution.

Recounts will slow but not stop the process. A recount Trump’s campaign says it will demand in Wisconsin must be paid for by the campaign – to the tune of an estimated $3 million.

The RNC is now looking to raise $60 million to fight for Trump in court, an effort which will be led not by a James Baker figure, but by David Bossie, an off-again on-again member of Trump’s inner circle, once cast out over claims he was profiting from the president’s name, but now reconciled.

Trump’s team has already moved to try to get the Supreme Court to revisit a decision about Pennsylvania accepting ballots postmarked by Nov. 3 after that date.

But depending on the size of Biden’s lead, they may not even make the difference in the race.

The court, which now holds a 6-3 conservative majority thanks to Trump’s pre-election bush to get Amy Coney Barrett on the court, traditionally defers to states on setting their own election laws.

Trump’s campaign has been blasting out email appeals for his election defense, promising a 1000 per cent match to ‘FIGHT BACK!’

The costs of battling in every venue with complex litigation will add up.