‘I know what I’ve got to do to beat him in the rematch’: George Kambosos Jr confirms his plans to fight new undisputed lightweight champion Devin Haney again, insisting it will be a different outcome next time after falling to a one-sided defeat

George Kambosos Jr insists he knows how to beat Devin Haney in their rematch later this year, despite falling to a one-sided defeat to the American in their undisputed clash on Sunday.

The 28-year-old suffered the first defeat of his 21-fight career as Haney, 23, became the youngest undisputed champion in the four-belt era with a dominant unanimous decision victory.

Haney was sharp and spiteful from the opening bell, earning two scores of 116-112 and one of 118-110 as he put in a masterful performance to etch his name in the history books. 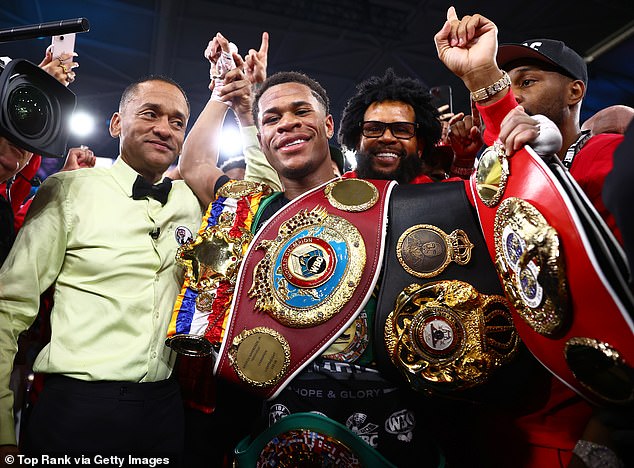 Kambosos Jr – fighting on home soil at the Marvel Stadium, Australia, having become unified champion with victory over Teofimo Lopez last year – was unable to find any rhythm throughout the contest.

The Australian remained upbeat in defeat, however, insisting he will return to the ring with renewed hunger despite his reign as lightweight champion lasting only a matter of months.

‘I’m the man in the arena,’ Kambosos Jr said at his post-fight press conference. ‘At the end of the day, I made this happen. If I didn’t choose this (fight) to protect records, I could have fought an easy fight and knocked someone out in two rounds. 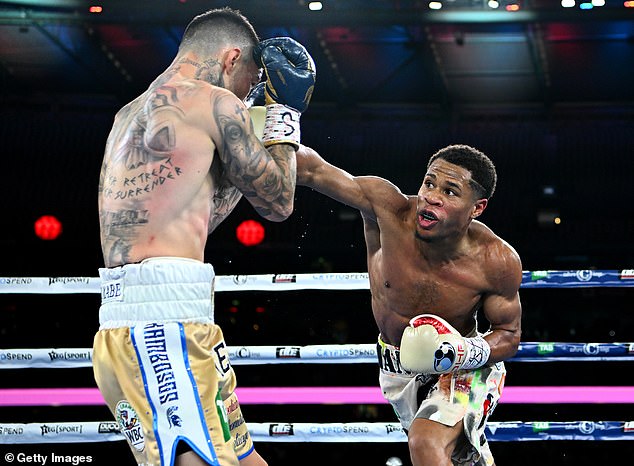 ‘The Dream’ was dominant throughout, with Kambosos Jr unable to land anything of note

‘That’s part of the risk. You take risks and you reap the rewards, but it was his night tonight and all the best. The adversity that I’ve got to go through now, I’ll be back hungrier than ever.’

Kambosos Jr immediately signalled his intention to activate the contractually-agreed rematch clause, insisting he believes the fight will once again take place in Melbourne.

Despite being totally outclassed throughout, ‘Ferocious’ assured he knows how he can emerge victorious when the lightweight pair meet next.

‘I know what I’ve got to do to beat him in the rematch,’ he said. ‘We had the game plan, which unfortunately we couldn’t implement the way we wanted do. 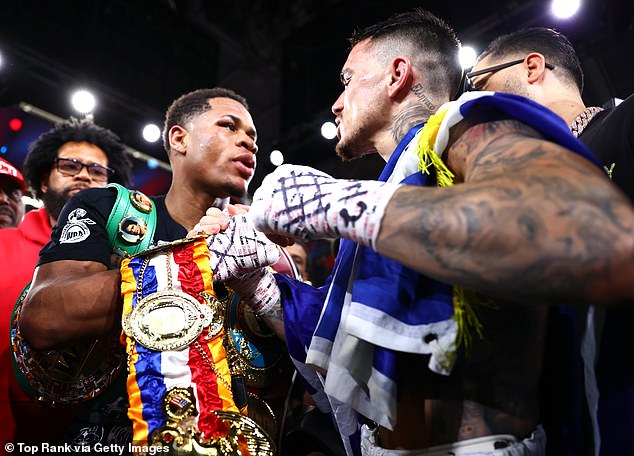 The Aussie insists he knows how he will beat Haney when the pair meet later this year, however

‘The ref let a few things go as well, which should have been pulled up a touch, but it is what it is. I’ll go back to the drawing board with my team.

‘Congratulations to Devin Haney and the team. They came all the way out here, like I did with Lopez, and they got the win today. But I’ll be back.’

As for when the rematch will take place, Kambosos Jr insisted he would be ready to challenge ‘The Dream’ as soon as tomorrow.

‘As soon as possible, I’ll do it tomorrow if you want, I feel great,’ he said. ‘Hopefully by the end of the year, by November we’ll do it again. 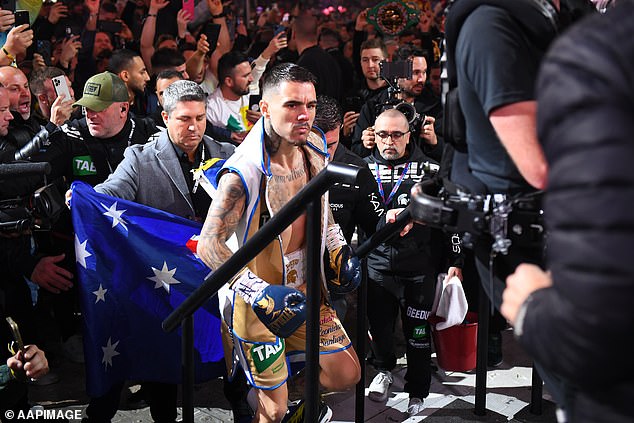 ‘I gave him the shot; no one else was going to give him a shot. There was too much politics involved for him and Lopez or him and (Vasyl) Lomachenko.

He continued: ‘I was sharp in points. I landed some very good shots, I hurt him a few times – I felt like every time I landed he was hurt.

‘He just fought his game with that jab. He just boxed off that jab and he did hold a lot. It is what it is.’