Genetic screening to identify patients at risk of heart disease or cancer could soon be carried out by GPs, scientists suggest.

Researchers hailed the technique – called whole-genome sequencing – as the start of a ‘revolution in healthcare’ that could significantly improve people’s health.

These were then screened for 566 separate genetic changes linked to a range of conditions, including cancer, and heart and blood-clotting diseases.

Genetic screening – or whole-genome sequencing – to identify patients at risk of heart disease or cancer could soon be carried out by GPs, scientists suggest (stock image)

Results revealed a quarter of participants had ‘actionable’ DNA mutations – meaning an increased risk of diseases for which treatments exist.

Detecting these could trigger a change in the way patients are treated by their GP, either by offering monitoring, screening and lifestyle changes, or other preventative measures, researchers said.

The scientists also found 60 per cent of people carried an inherited mutation in a ‘recessive’ gene, meaning they wouldn’t display any condition themselves but could pass it on to their children if their partner had the same recessive gene.

And 38 per cent had changes linked to responses to specific medicines – which could help doctors minimise the risk of side effects or decide whether to avoid a certain treatment.

The study, led by the Institute of Cancer Research and the Royal Marsden NHS Foundation Trust, is the first to show whole-genome sequencing can provide important genetic data in a primary care setting.

Dr Ros Eeles, who led the study, said the team is in talks with NHS England and hopes to roll out genetic health screening more widely in general practice within a few years. 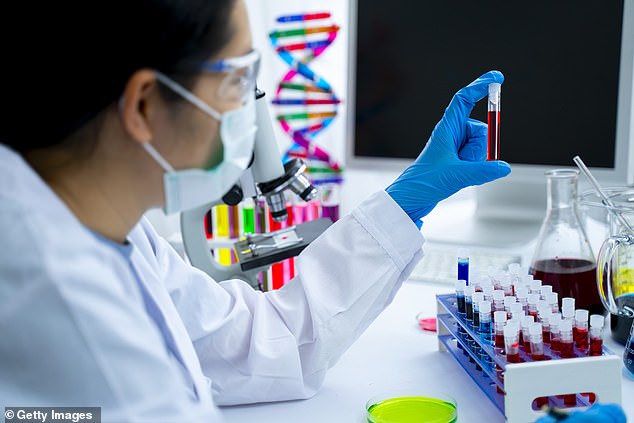 British researchers recruited 102 healthy people who had their full DNA code read from blood or saliva samples. These were then screened for 566 separate genetic changes (stock image)

‘It could potentially be part of your initial GP registration,’ she said. ‘If you are looking at a timeline, I think between two and five years.

‘We feel that this work could place us at the start of a revolution for healthcare.’

One participant who flew regularly was found to have a mutation linked to a raised risk of deep vein thrombosis and is now given an injectable anticoagulant when she flies.

Another was found to have an increased risk of ovarian cancer, and decided to have her ovaries removed as a precaution.

Mutations linked to dementia or neurological conditions for which there is no active treatment were not screened for.

The findings are to be presented at the American Society of Clinical Oncology conference in Chicago.