GCP ASSET BACKED INCOME: Trust’s mission is to produce a steady income, with the occasional special dividend in good times

The central mission of GCP Asset Backed Income is to produce a steady income for investors.

The investment trust was launched almost seven years ago and so far has achieved just that. The trust pays a quarterly dividend, which has increased every year. Plus there is the occasional special dividend in good times.

The £437million fund provides this income by lending to companies at an interest rate averaging 8 per cent. It has 62 ongoing loans in 22 sectors, including football clubs, student accommodation, care home and childcare provision, most in the UK.

The fund raises money from its shareholders and lends it out to firms, much like a bank or peer-to-peer lender might.

But unlike other types of lender, GCP Asset Backed Income is an investment trust, which means it is listed on the stock exchange, where its shares can be bought and sold.

Manager David Conlon says firms turn to the trust for loans thanks to word of mouth and because it offers a rare size of loan. He says: ‘The loans tend to be £5million to £20 million.

This is too big for a peer-to-peer lender, but too small for most banks to be interested in as they are more likely to give loans at around the £40million mark.’

The loans may be for expansion, building of new premises or even to tide a firm over – if it is confident there are brighter days ahead.

All of the lending is backed by assets, such as buildings. This means if a borrower cannot repay the loan, the asset can be sold and the trust will get some value back.

By contrast if a trust buys shares in a firm that goes bust, there is a chance it will be left with nothing. However, if shareholders in GCP Asset Backed Income worry that loans could sour, its share price could fall.

The trust has made about 100 loans, and there have been two defaults. Trust managers are keen for borrowers to succeed, so work hard to avoid a loan going wrong.

Conlon says: ‘It’s a pretty boring fund. You won’t get huge growth with us, but you will get a nice, steady income.

‘There is a lot of diversity in the types of loans we make, so we are not too dependent on any one sector.’

The figures bear this out. A £1,000 investment three years ago would be worth £1,033 today. Investors have received quarterly payments throughout: the dividend yield is 6.75 per cent.

Just less than half the trust’s loans are protected against rising inflation because rate protection is written into the loans: if inflation rises, so does interest paid.

Conlon says: ‘For example, we lend to care homes, which tend to raise fees in line with inflation. As a result, they can increase the interest rate they pay to us.’

Where a borrower cannot pass on cost rises, the trust can compromise. For example, if inflation is running at 8 per cent, but the firm can only pass on 3 per cent of that to customers, the trust may accept just a 3 per cent rise in the interest rate it receives.

GCP Asset Backed Income does not disclose the names of most firms it lends to due to terms in contracts it signs with borrowers and agreements with fellow lenders. 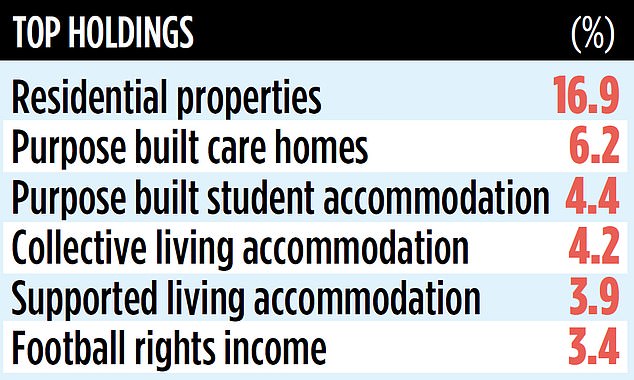 However, Conlon reveals that a number of borrowers are football clubs, in the UK and Spain. These loans are backed by sponsorship or television deals, so the income should be guaranteed.

The trust also makes loans to care home and childcare providers. These two sectors are struggling with staff shortages and wage rises. But Conlon says it only extends loans to big providers with good, modern spaces, which are better able to weather the difficulties. One is the childcare provider N Family Club.

The stock market ID code is BYXX8B0 and the annual charge is 1.18 per cent. It is currently trading at a small discount, which means that the value of the fund’s underlying assets is higher than the total value of its shares.