A gay couple had their dream wedding plans cancelled after the owner of their reception venue allegedly told their wedding planner he didn’t support same sex marriage.

Kevin Chaffe, 37, said he and his partner Ken were no longer holding their nuptials at the 13th century Cotswolds barn after the ‘devastating’ comments were made to caterer Kerry Jones on Saturday.

The pair had provisionally booked their wedding at the historic Prior’s Court Barn in Brockworth for March 28.

But the engaged couple have claimed they felt unwelcome at the venue after the owner told their wedding planner he didn’t believe in same sex marriage.

Tim Wiltshire, who owns the venue with his wife Bridget, has claimed the alleged comments stem from a ‘misunderstanding’ in a conversation with the catering company.

Courier Mr Chaffe insisted the venue’s owner told their wedding planner they could ‘no longer use the venue’, though it is unclear who ultimately cancelled the provisional booking.

He said: ‘We are still upset about the situation – it violates the equality act where a business or service provider can not refuse services due to sexual orientation.

‘He basically said he doesn’t agree with same sex marriage and we can no longer use the venue.

‘He assumed the emails were typing errors when mine and my boyfriend’s name was mentioned. The message we want to get across is this is not OK.’ 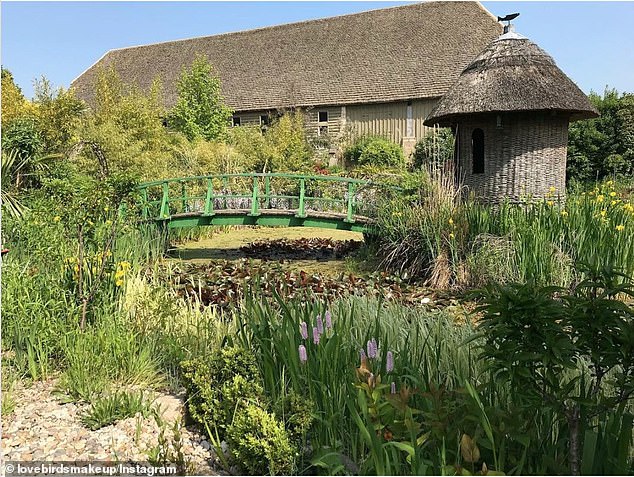 The couple, who live not far from the venue near Cheltenham, had been due to tie the knot at the venue – said to have been visited by Henry VIII and Anne Boleyn in 1535 – on March 28.

They have received an outpouring of support from friends and family after Mr Chaffe posted of his upset at the alleged comments on Facebook.

On social media, he wrote: ‘I think this is just disgusting that in a modern world where you can by law express the love for your partner, irrelevant of the gender, we could get married in a church by law!

‘It has been a devastating blow to myself and Ken but with that being said our truly amazing friend and outstanding wedding planner Kerry Jones had us another venue within the hour. 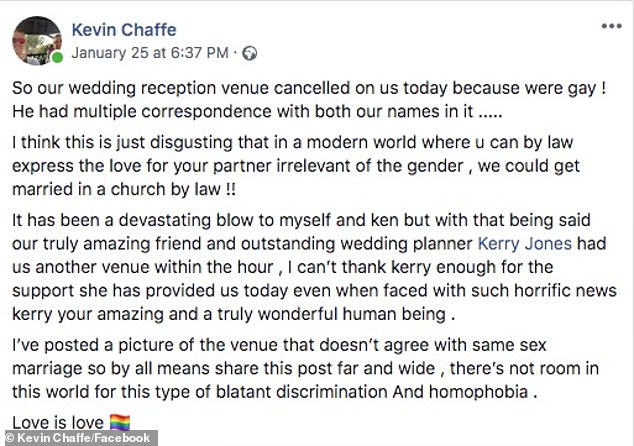 ‘I can’t thank Kerry enough for the support she has provided us today even when faced with such horrific news – Kerry you’re amazing and a truly wonderful human being.

‘I’ve posted a picture of the venue that doesn’t agree with same sex marriage so by all means share this post far and wide, there’s not room in this world for this type of blatant discrimination and homophobia.

Mr Wiltshire has claimed the couple had made a ‘reservation not a booking’ and had never visited the venue in person. He added that the comments were a ‘misunderstanding’ that have ‘grown out of proportion’.

He said: ‘The venue position – we are legally licensed here for weddings – is that obviously within that licence all couples of the same sex can be married here, but the reservation came through a catering company, I have personal views that don’t relate to the official wedding venue views. 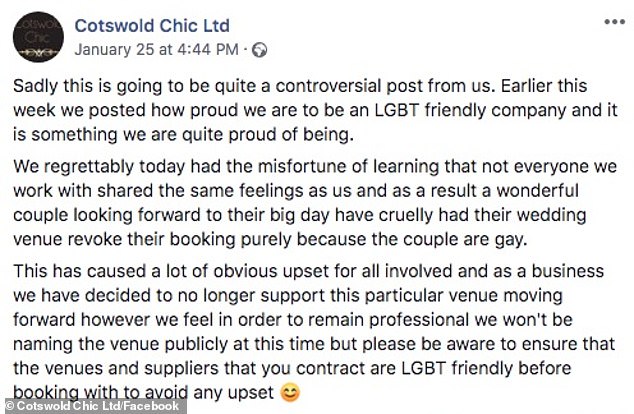 ‘There was a misunderstanding and we did go back within an hour and a half and say they can come, but by then they’d declined and were looking at somewhere else. It’s grown out of proportion.’

She said: ‘Sadly this is going to be quite a controversial post from us. Earlier this week we posted how proud we are to be an LGBT-friendly company and it is something we are quite proud of being.

‘We regrettably today had the misfortune of learning that not everyone we work with shared the same feelings as us and as a result a wonderful couple looking forward to their big day have cruelly had their wedding venue revoke their booking purely because the couple are gay.

‘This has caused a lot of obvious upset for all involved and as a business we have decided to no longer support this particular venue moving forward, however we feel in order to remain professional we won’t be naming the venue publicly at this time but please be aware to ensure that the venues and suppliers that you contract are LGBT friendly before booking with to avoid any upset.’