Manchester United only have themselves to blame after conceding late in Wednesday’s 1-1 draw against Crystal Palace, because their wall was nowhere near ‘big enough’ to stop Michael Olise’s stunning injury-time free-kick.

That is the view of Red Devils legend Gary Neville, who tweeted after the match to bemoan his old club’s decision only to have three men in the wall when Olise stepped up to take his free-kick in stoppage time.

Selhurst Park erupted as the Crystal Palace winger cancelled out Bruno Fernandes’ first-half opener with a sublime left-footed effort from the set piece, which thundered in off the crossbar beyond United goalkeeper David de Gea. 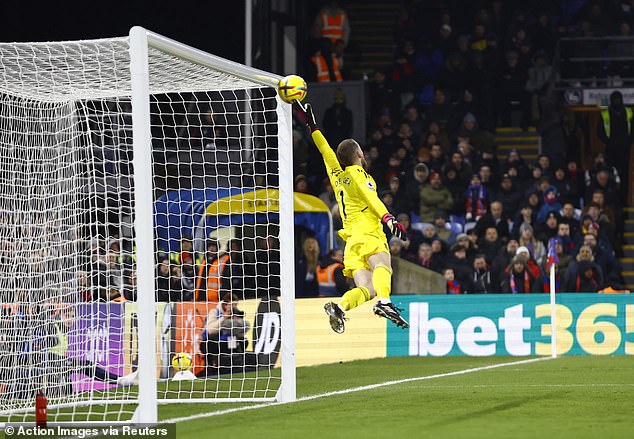 More importantly, United also gave up crucial ground in the title race against Arsenal, who remain eight points clear at the summit of the league.

Frustrated with the Red Devils’ wall, which consisted of Casemiro, Fred and Alejandro Garnacho, Neville took to social media and wrote: ‘That wall was never big enough. Always going to shoot.’

He added in a follow-up tweet: ‘Put the taker off! A massive wall with big players in makes it more difficult for the taker! That wall lacked presence and made it look inviting!’

Meanwhile, Jamie Redknapp was eager to focus on Olise’s skill rather than the drawbacks of Manchester United’s wall.

Not only did the ex-Spurs and Liverpool star describe the strike as a ‘stroke of genius’, but he also branded it as the best free-kick of the campaign so far. 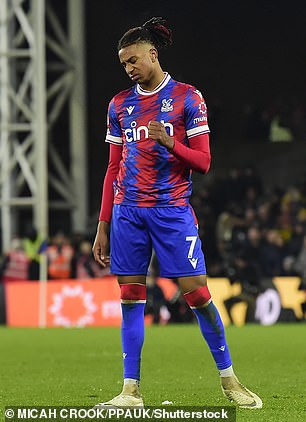 Olise, who has been known to hold back from goal celebrations in the past, wore a muted expression after the free-kick crashed in off the crossbar.

Redknapp told Sky Sports: ‘It was the best free-kick of the season.

‘We’ve seen James Ward-Prowse, he has got a catalogue of these throughout the season and his career, but that is a stroke of genius.

‘I just don’t understand why he has not celebrated. I scored a few free-kicks and my shirt was off, the lot. I was doing love bites, everything.

‘That is as good as it gets and I’m sure deep down inside that he is buzzing, but what a free-kick and what a moment for them. 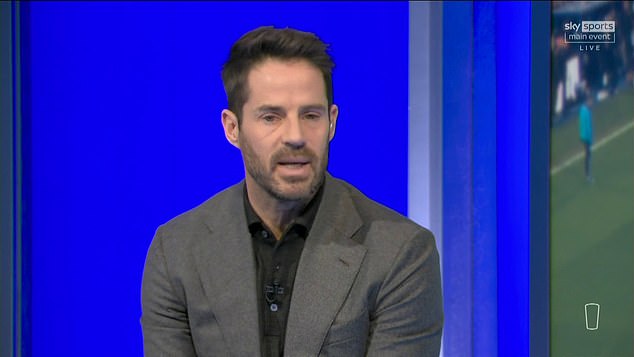 ‘I thought from Palace point of view they produced a good performance for their manager and they needed it.’

Fellow pundit Glenn Murray added: ‘I think it deserved a celebration at least, I think that was the most low key moment of the whole game because this free-kick is absolutely sumptuous, it’s brilliant to get it up and over the wall and just kiss off the bar and in.