Gary Lineker has insisted the BBC’s director-general Tim Davie is ‘perfectly happy’ with his conduct on Twitter after he issued new ‘impartiality’ guidelines in a bid to crack down on outspoken stars.

The director-general set out new guidelines on Thursday aiming to ‘ensure the highest possible standards of impartiality’ among staff in the wake of the damning criticisms his predecessor faced.

Match Of The Day presenter Lineker is well known for being forthright with his views on Twitter, posting about topics including Brexit, racism and coronavirus.

After the guidelines were published, he vowed to continue using his ‘large platform’ on social media to share his views.

The former England striker said he welcomes the debate that comes with discussing his opinions – and hopes he can influence ‘one or two’ people.

However, the 59-year-old has since told Times Radio the BBC trust him to post appropriately.

Match Of The Day presenter Gary Lineker (pictured) is well known for being forthright with his views on Twitter, posting about topics including Brexit, racism and coronavirus

Speaking to Weekend Breakfast, he said: ‘I’ve spoken to Tim Davie quite a few times in recent weeks, not necessarily about that but all sorts of things.

‘I think he’s perfectly happy with the way I go about my social media. I think the BBC trusts me to do the right things. And I carry on in exactly the same manner.

‘I think that they are just guidelines, obviously. And I think we all know, at the BBC, we have a responsibility. So I think we’ll continue to try and be wise in our social media.’

Following the imposition of the new guidelines on Thursday, Lineker vowed to continue using his ‘large platform’ on social media to share his views. 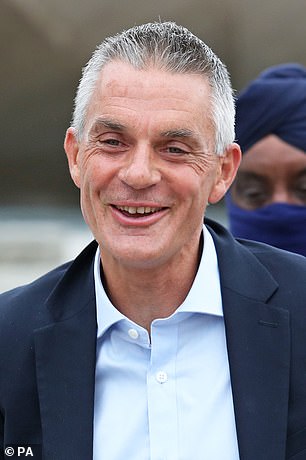 Lineker, who is father to four sons, recently welcomed a refugee into his Surrey home through the charity Refugees At Home.

He said of the experience: ‘Very, very positive. I had my house guest a few weeks ago, he stayed for about three weeks. I kind of offered him an emergency service through Refugees At Home. And it was a lovely thing to be able to do.

‘I think he had an amazingly positive effect on not just myself and my children, it gave us a perspective of what life can be like for others and what perhaps they have to go through because we’ve obviously been pretty privileged in ours.

‘And overall, it was a really good experience and something I’d definitely do again.’

When he came into the post in September, Mr Davie warned staff he would be bringing in stringent new measures to ensure impartiality and that they would face the sack if they fell foul of the rules.

BBC stars took to Twitter to rebel against tough new social media rules banning staff from voicing some personal views online or undertaking lucrative outside work, before it was claimed employees could be suspended if they attended events such as LGBT protests.

The suggestion sparked outrage, with Labour peer Lord Adonis among those to take to social media. 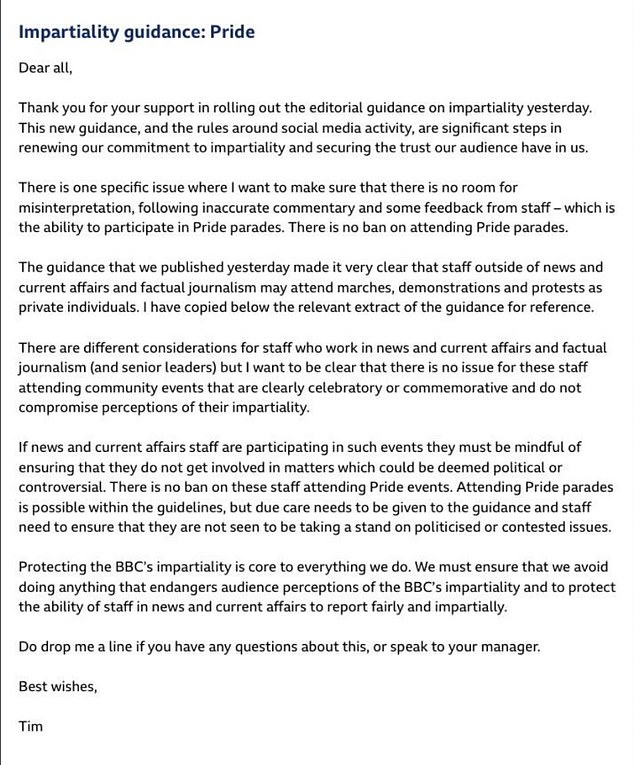 Mr Davie yesterday clarified the new guidance, which he described as a significant step in ‘renewing our commitment to impartiality and securing the trust our audience have in us’

The suggestion of BBC staff being banned from Pride sparked outrage, with Labour peer Lord Adonis among those to take to social media

Former BBC journalist Maz Hamilton added: ‘Honestly not sure how to process the fact that expressing my identity or discussing my life is now such a radical political act that it could potentially disqualify me from holding the position I previously held at the BBC’

Sangita Myska, presenter of Positive Thinking on BBC Radio 4 questioned whether reporters would still be able to wear poppies on screen 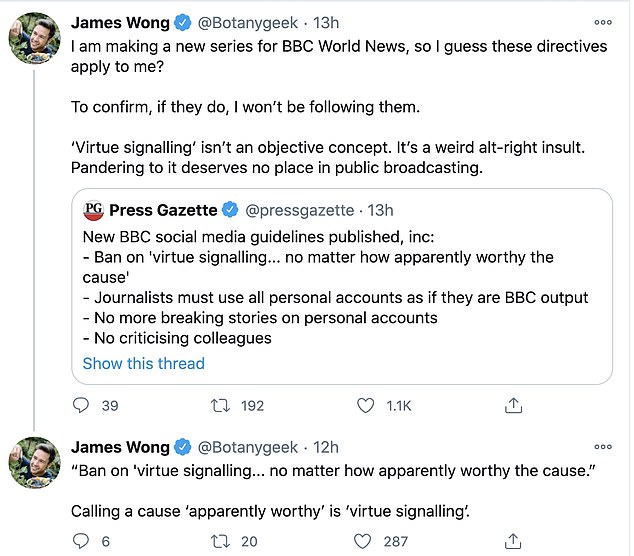 James Wong, who appears on Country File and Gardener’s Question Time said that he wouldn’t be following the rules

Huw Edwards, Presenter of BBC News at Ten took to Twitter to immediately flout the

He wrote: ‘It is unacceptable that BBC staff, or anyone employed anywhere in Britain, should be banned from attending pride marches. A real blow to equal rights. If this is accurate, Tim Davie & the BBC need to reconsider urgently.’

Former BBC journalist Maz Hamilton added: ‘Honestly not sure how to process the fact that expressing my identity or discussing my life is now such a radical political act that it could potentially disqualify me from holding the position I previously held at the BBC’

However, Mr Davie yesterday clarified the new guidance, which he described as a significant step in ‘renewing our commitment to impartiality and securing the trust our audience have in us’.

Things to DO: Ten things staff should not do under the BBC’s new social media rules

1. Always treat others with respect, even in the face of abuse

2. Assume anything you say or post will be viewed critically

3. If you know you’ve got something wrong, correct it quickly and openly

4. Remember that your personal brand on social media is always secondary to your responsibility to the BBC

5. Respect the confidentiality of internal meetings and discussion

6. Think about what your likes, shares, retweets, use of hashtags and who you follow say about you

7. Be open to, seek, and respect the widest range of opinion and reflect it

8. Use separate posts on public issues rather than join threads started by others

9. Be careful with rebuttals – they can feed conflict

10. Think how to signal that a post is a professional judgement, not a personal opinion

Things NOT to do: Ten things staff should not do under the BBC’s new social media rules

1. Do not be drawn into ill-tempered exchanges, or exchanges that will reflect badly on you, or the BBC

2. Do not post when your judgement may be impaired

3. Never use your BBC status to seek personal gain or pursue personal campaigns

4. Do not reveal how you vote or express support for any political party

5. Do not offer judgements beyond your specialism

6. Do not support campaigns no matter how apparently worthy the cause

7. Do not post anything that couldn’t be said on-air or on BBC platforms

9. Do not link to anything you haven’t read fully

10. Do not be seduced by the informality of tone and language on social media

He wrote: ‘There is one specific issue where I want to make sure there is no room for misinterpretation, following inaccurate commentary and some feedback from staff – which is the ability to participate in Pride parades. There is no ban on attending Pride parades.

‘The guidance that we published yesterday made it very clear that staff outside of news and current affairs and factual journalism may attend marches, demonstrations and protests as private individuals.

‘There are different considerations for staff who work in news and current affairs and factual journalism (and senior leaders) but I want to be clear that there is no issue for these staff attending community events that are clearly celebratory or commemorative and do not compromise perceptions of their impartiality.

‘If news and current affairs staff are participating in such events they must be mindful of ensuring that they do not get involved in matters which could be deemed political or controversial. There is no ban on these staff attending Pride events.

‘Attending Pride parades is possible within the guidelines, but due care needs to be given to the guidance and staff need to ensure that they are not seen to be taking a stand on politicised or contested issues.