EXPRESS INFORMER > Sports > Gareth Bale – who else? – warms up for the World Cup by hauling LAFC back from the brink

Gareth Bale – who else? – warms up for the World Cup by hauling LAFC back from the brink of defeat to MLS Cup glory with a towering 129th minute header… but he only played 22 minutes with the Qatar on the horizon

By Steve Brenner For The Mail On Sunday

It just had to be Gareth Bale.

With his Los Angeles FC side heading for defeat in a wild, raucous MLS Cup final, the Welshman popped up with a dramatic 129th minute equalizer to spark pandemonium in the stands at the Banc of California Stadium.

He had done little since being introduced near the start of the second period of extra-time. A few nice touches but little else.

Bale though will always be a threat in the opposition box and just when it looked like Jack Elliott, Philadelphia’s London born defender, had won the game with an unlikely double the Wales captain was on hand to bring the game level again and into a penalty shoot-out which was won by sub keeper John McCarthy who produced two excellent stops to hand LAFC their first ever MLS title.

The stage was set at the Banc of California Stadium with LAFC co-owners Larry Berg and Magic Johnson strolling onto the pitch to meet the players while in the stands, it was bedlam.

These are the kinds of occasions the likes of NBA legend Johnson and his ownership group dreamed of when they unhatched their vision for LAFC.

Star names like Bale and former Juventus defender Giorgio Chiellini may have been on the bench to start with yet coach Steve Cherundolo has built a free scoring side who are easy on the eye.

Philadelphia, meanwhile, may have the second lowest wage bill in MLS but lead the attacking and defensive charts proving you don’t always need superstar names to rule the roost in North America.

This was the first time the top two seeds from the Eastern and Western conference had met in the end of season showpiece and it was lively from the off even if decent chances were few and far between. 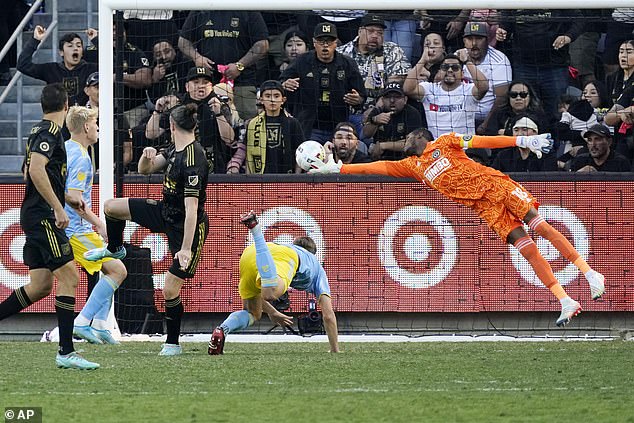 The home side looked the most dangerous, however, and they drew first blood on 28 minutes, Kellyn Acosta’s free-kick deflecting off Jack McGlynn in the wall leaving Union keeper Andre Blake with no chance.

LAFC began to dominate possession with Philadelphia offering little in attack and Blake was on hand to produce a smart stop to deny Diego Palacios who was nicely teed up by Vela before the dangerous Cristian Bouanga fired just over.

The Union were hanging in, however, and on 58 minutes received their reward. Daniel Gazdag was played onside and he clinically finished from close range to bring the visitors level.

Both sides looked to be cancelling each other out until a crazy three minute spell at the end blew the clash wide open. LAFC looked to be landing the trophy after Jesus Murillo headed in from a Vela corner. 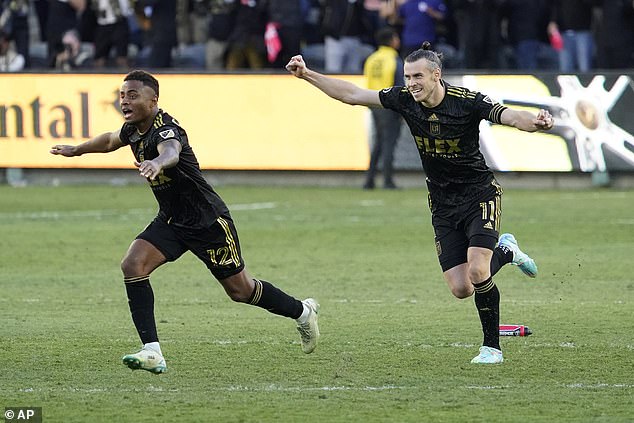 But just two minutes later, Philadelphia were level, Elliott powering a header home to bring the visitors right back into a game which had suddenly exploded into life.

LAFC pushed hard at the start of extra-time and six minutes into the first period, the Wales captain finally replaced Vela as Cherundolo tried to energise his troops ahead of one last push for glory.

His plans were rocked midway through the second half of extra-time when keeper Maxime Crepeau looked to have broken his leg following a nasty clash with Cory Burke who almost got on the end of an awful back pass.

The LAFC keeper was treated for at least 10 minutes on the pitch before being wheeled away and eventually red carded for his challenge on Burke following a VAR check before Elliott’s second of the game looked to have sealed it for Philadelphia.

But then up popped Bale to head in with just three minutes left to spark pandemonium in the stands.

His 22-minutes on the field suggest he is not 100 per cent ahead of the World Cup. Wales begin the tournament on November 21 against the United States.

Both sides missed their opening spot kicks yet it was LAFC who held their nerve with McCarthy on hand to save two Philadelphia penalties and put the home side on the way to glory.