Gamblers lost a record £614million in December, sparking accusations that the industry is ‘cashing in on coronavirus’.

The loss was £71million greater than in October, before families were forced to stay at home by lockdown.

Compiled by the Gambling Commission, the figures also showed a record 2.1million played online slots and casino games in December.

Gamblers lost a record £614million in December, sparking accusations that the industry is ‘cashing in on coronavirus’. Picture: Stock

Carolyn Harris, the Labour MP who chairs the all-party parliamentary group for gambling, said: ‘These massive losses show that gambling companies are cashing in on coronavirus and the extraordinary hardship some families are facing in lockdown.’

Some 5 million people betting on sport lost a total of £319.6million, and there were close to 3 million ‘active’ customers playing online slots, who lost £199.7million in December.

The number of slot sessions over one hour – a statistic used to help assess gambling harm – also rose by 15 per cent to 2.5million between October and December.

Previous research has shown that many of the most intensive gamblers have upped their spending in the pandemic as they devote more time to gambling while stuck at home.

Campaigners said the sharp increase in gambling and the lengthy lockdown, which will now effectively last until mid-May, will lead to a ‘tsunami of addiction’.

Matt Zarb-Cousin, of campaign group Clean Up Gambling, said: ‘In a sector that still derives the majority of its profits from people losing more than they can afford, the isolation of lockdown has further exposed the lack of protections online, particularly around addictive slots and casino games where stakes are still unlimited. 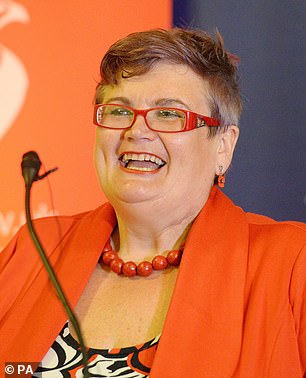 ‘This data underlines how urgent it is that the Government caps stakes on slots at £2 a spin.’

Ministers have launched a wide-ranging review into Britain’s gambling laws, which is set to spark the biggest shake-up in the legislation governing the industry for 15 years.

The items under consideration, dubbed a ‘reformer’s shopping list’, include maximum stakes online and tough checks on whether players can afford their losses.

The industry has responded to criticism over advertising in lockdown by devoting a fifth of TV and radio ads to ‘safer gambling’ messages.

A separate study, published yesterday by the Gambling Commission, reported that the number of regular gamblers had fallen in the pandemic – due to the closure of bookmakers and cancellation of live sport.

The regulator said the survey, conducted between March and December, showed ‘early indications that problem gambling rates have not increased during the pandemic’.

The Betting and Gaming Council said: ‘At the start of the pandemic, the BGC took action which has led to the number of safer gambling messages on websites more than doubling and the number of direct interventions increased by 25 per cent on customers who were spending more time or money betting than they did before Covid.

‘Nevertheless, one problem gambler is one too many, which is why the BGC is determined to continue its work on driving up standards in the regulated industry.’