Gabby Petito was ‘super excited’ to have get matching finger tattoos with boyfriend Brian Laundrie as a symbol of their love – and designed others herself, the artist who inked the couple has revealed to DailyMail.com.

The ‘bubbly’ 22-year-old also talked animatedly about the fateful cross-country road trip the couple were planning and how they were working flat out to save for a van to live in during the epic journey.

Gabby was beaming as she sketched a tiny scorpion and a ghost on a skateboard on Laundrie’s consent form – obtained by Dailymail.com – to show the artist exactly what she wanted, he said.

She also had a small Pisces zodiac sign inked on her, as revealed in our exclusive photos of her hands moments after she had the work done.

The couple got their tattoos on October 8 last year, several months before setting off in Gabby’s 2012 white Ford Transit van for a trip that took them to Utah and Wyoming from the home they shared with Laundrie’s parents in North Port, Florida.

And the couple’s demeanor that day gave no hint of the heartbreak to follow, with Gabby’s body being found in Bridger-Teton National Forest, Wyoming, on September 19 and her death declared a homicide. 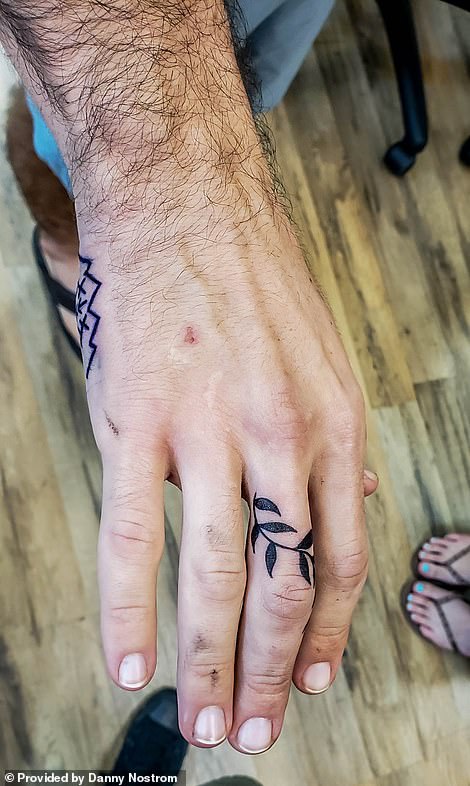 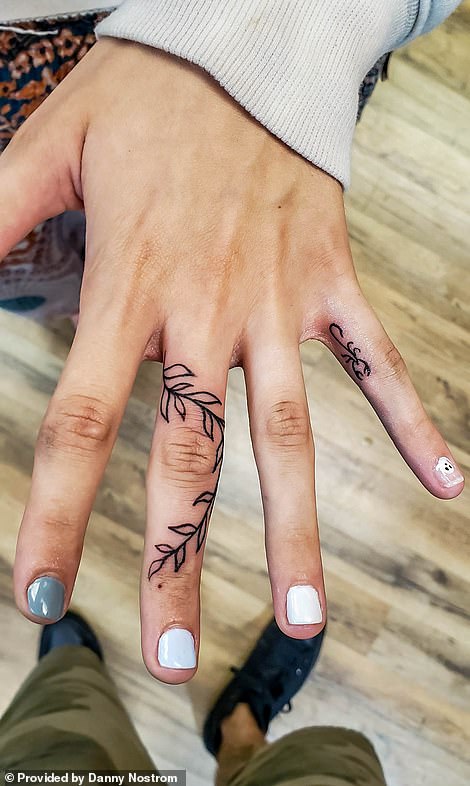 His and Hers: Gabby and Brian got matching tattoos of a vine on their fingers ‘to represent their love and the fact they were planning this big trip together,’ Nostrom said

In addition to the matching vine tattoo, Gabby got a ghost on a skateboard, which she drew herself, and a Pisces zodiac symbol

Laundrie, 23, remains a fugitive amid an FBI manhunt sparked by his disappearance on September 14, two weeks after driving the van back to Florida alone – and four days after Gabby was officially reported missing by mom Nichole Schmidt.

Danny said Laundrie had only one existing tattoo that he could see, which was three mountain peaks with three X marks in them on his right hand

Tattoo artist Danny, who owns a business in Venice, Florida, said: ‘Gabby and Brian came in super excited about getting new tattoos. They had texted for an appointment and were referred by a friend.

‘They knew exactly what they wanted. They said they wanted a couple of vines around each one of their fingers to represent them and their love and the fact they were planning this big trip together. They said they had been together two years.

‘I said, okay easy enough. And then she added a couple of other things she wanted – a ghost riding a skateboard, a little Pisces zodiac sign and a little scorpion on her other fingers. So we just whipped them together and got it taken care of.’

He added: ‘She actually drew the skateboard and the ghost and then she drew the scorpion as well, to show me what she wanted them to look like. She sketched them on his paperwork, a consent form, so I could get a visual. The vine was something they had seen on Pinterest or something.’

Danny said Laundrie had only one existing tattoo that he could see, which was three mountain peaks with three X marks in them on his right hand.

‘All they talked about was their relationship and how they planned on traveling,’ said the tattoo artist. ‘They were super excited, very eager about their trip. They didn’t specify where they were going or when. They just said they were planning this trip to go live out of a van for a little while.

‘I’m assuming it’s the same trip that Gabby never returned from. I remember them saying they didn’t even have the van yet, they were working in a Publix supermarket and saving up for it.

‘Gabby came across with a very bubbly personality, very happy. She didn’t seem like she was troubled at all, or anything out of the ordinary. She seemed happy to be in the shop, she seemed super, super friendly.

‘He was a little more standoffish, but we had a nice conversation anyway. He wasn’t totally socially awkward or anything. He was just a little more quiet.’

Laundrie talked of his own art work and graphic designs which he turned into stickers and business cards, Danny said.

‘Gabby discussed how she liked horror movies, and they were into the TV show Forensic Files,’ he added. ‘She didn’t say which horror movies.’ 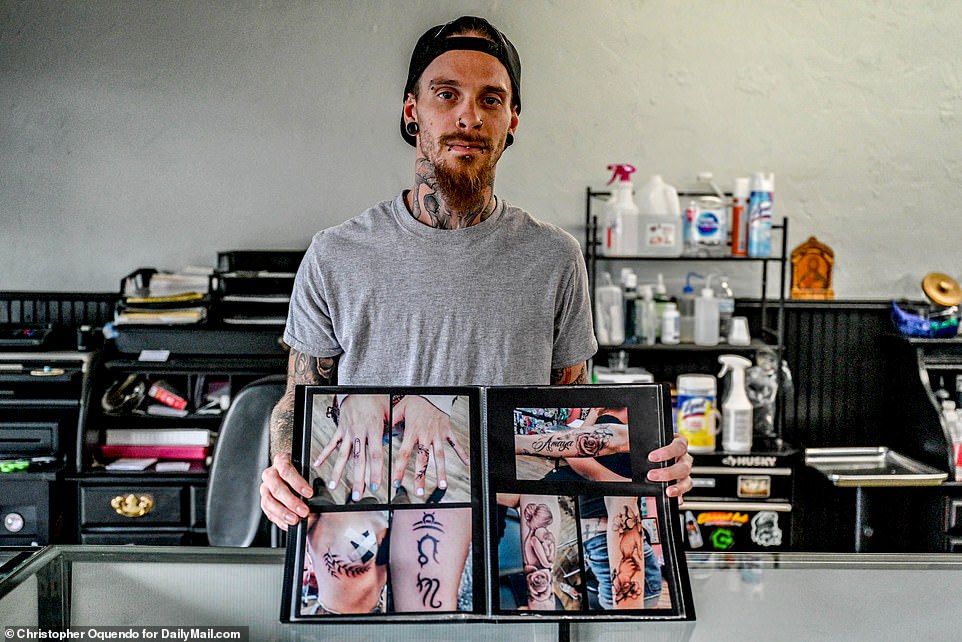 Tattoo artist Danny Nostrom owns his business in Venice, Florida. He said he didn’t realize he had inked the ill-fated couple until he looked through his portfolio 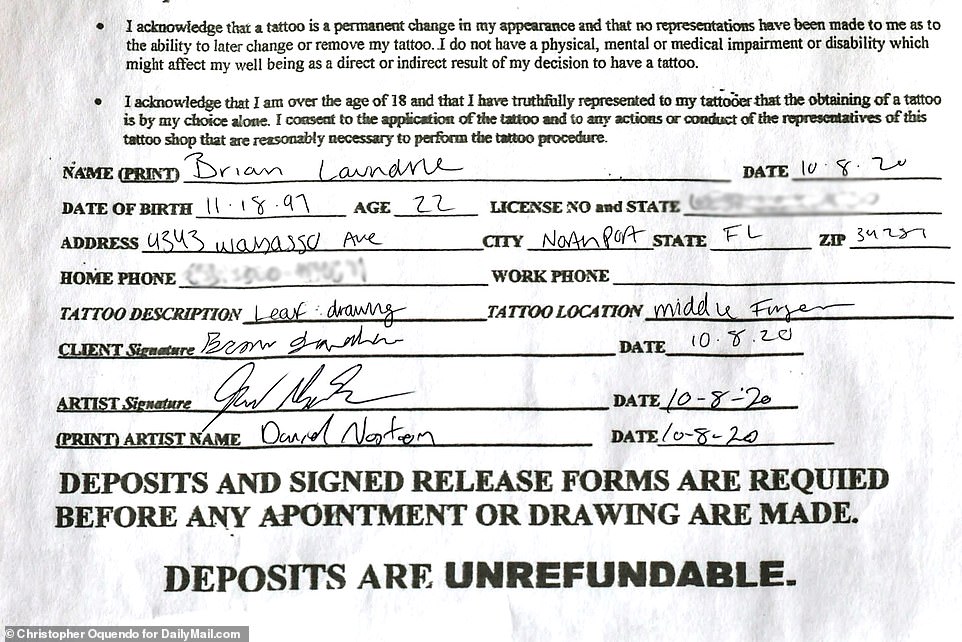 Brian’s consent form is pictured. The tattoo artist said Laundrie ‘was a little more standoffish, but we had a nice conversation. He wasn’t totally socially awkward or anything. He was just a little more quiet’ 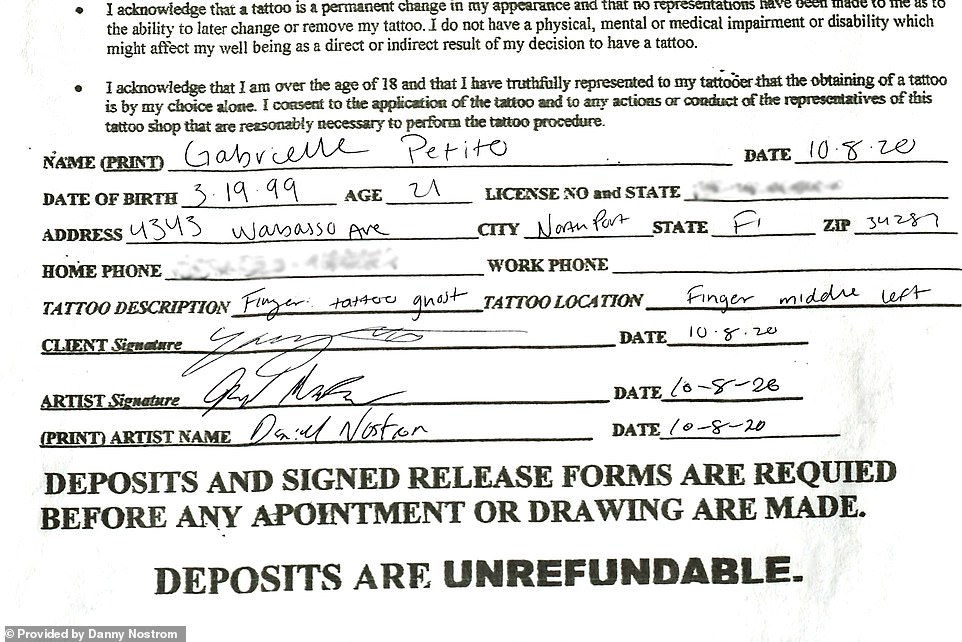 ‘Brian had an existing tattoo on the side of his right hand,’ said Danny. ‘It was like three mountains with Xs in each. It was a little faded because of where it was on the hand and he wanted me to touch it up so I did.

‘And then I did the vines on his finger, with the solid leaf work, solid black. But that was it, nothing else. He had no other visible tattoos, nothing I could see. I didn’t even see her other tattoos because she had long sleeves on.’

‘His didn’t come down as far as Gabby’s, just past the knuckle instead of way down. He had no issue with the needle, he sat like a champ.

‘The vines were for them, showing themselves as together. The Pisces logo was for her, the ghost on a skateboard was because she liked Halloween and she long boarded as a hobby. I can’t remember the significance of the scorpion.’

The work cost $50 for each of them and took around 90 minutes to complete for the pair and Brian paid.

Despite the massive publicity around the case – first with Gabby reported missing and then Brian vanishing – Danny did not at first realize he had inked them both.

‘I had seen them on Facebook and Instagram numerous times in connection with the news, but I couldn’t put a finger on where I knew them from,’ he said.

‘I just knew they were familiar. One night I was with my girlfriend and it just clicked. I said, I think I have tattooed them.

‘My girlfriend said, no you didn’t. I was like, I’m pretty sure I have. I think I have the tattoos right here. So I started scrolling through my portfolio on my phone and there they were. I checked through social media and there it was, my work.’

He continued: ‘I was just mind blown that what had happened was this close to home. It made it that much more real.

‘It had me in awe for a couple of days. It’s a big deal as a tattoo artist, we become a part of these people’s lives. We have put a piece of us into them. Because they forever look at those tattoos.’ 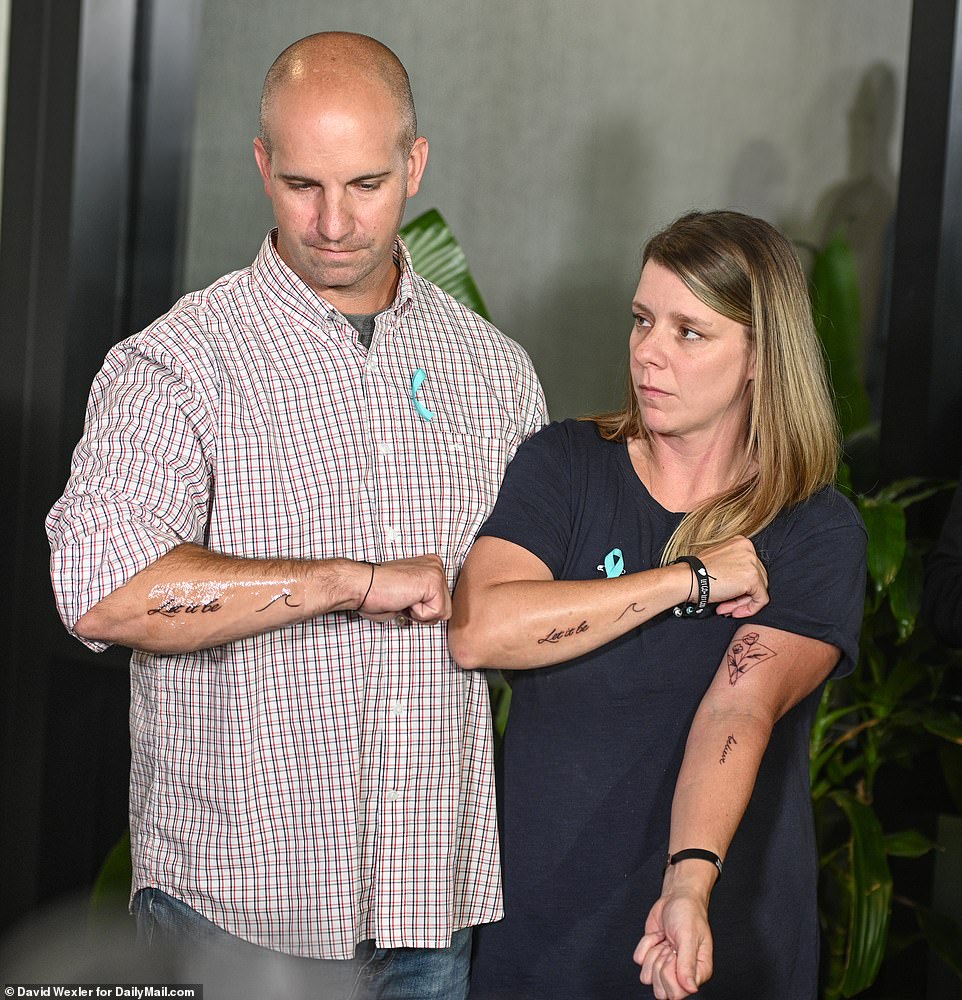 Gabby’s stepfather Jim Schmidt and mom Nichole Schmidt displayed their brand new tattoos at a press conference in Long Island, that say ‘Let it be’.  Gabby had the same tattoo on her arm

Over the weekend, Gabby’s mother Nichole tweeted ‘Mama bear is getting angry! Turn yourself in!’ 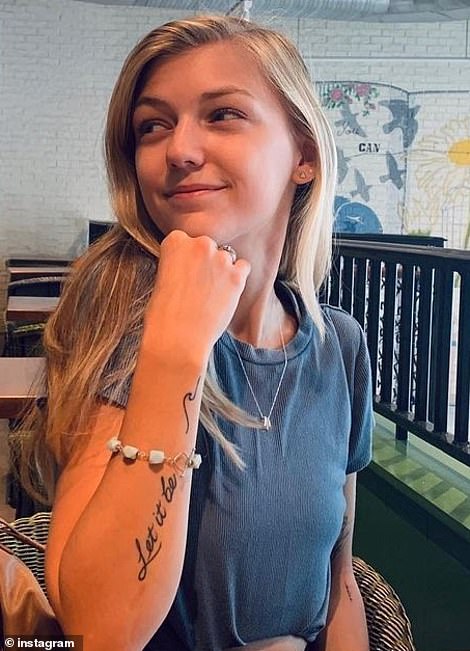 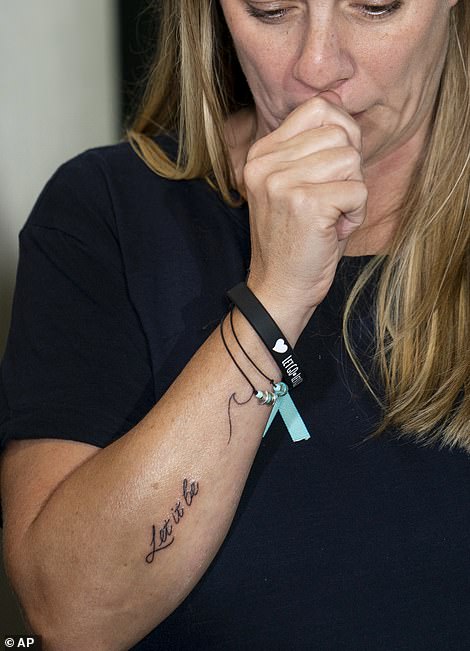 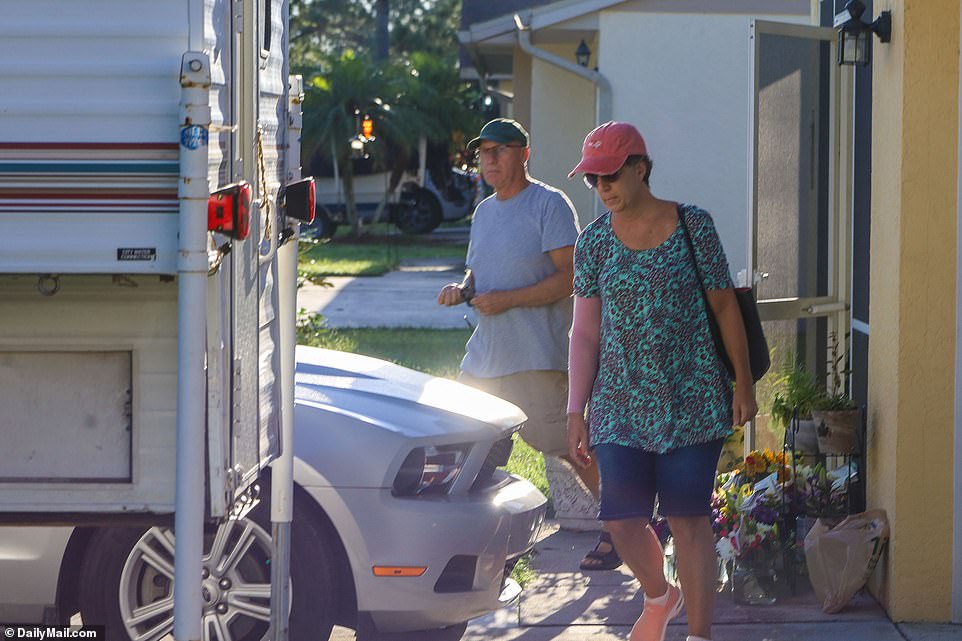 Brian Laundrie’s parents Roberta and Chris have remained tight-lipped. They claim they have no idea where their son Brian is

Danny shared the paperwork the couple signed in order to have the tattoos.

Both contain their signatures, with Laundrie’s scrawled underneath a description of the tattoo he wanted as a ‘leaf drawing’.

Gabby did have another tattoo, not done by Danny. It was ‘Let It Be’ on her right arm, a tribute to the Beatles hit. Close family members have had the same tattoo inked on their rights arms in her memory.

Police and FBI were still hunting for Laundrie in alligator and snake-infested swampland near his home over the weekend.

The scaled-down search in the menacing 25,000-acre Carlton Reserve started on September 18 – a day after Laundrie’s parents Christopher, 62, and Roberta, 55, told police he had vanished from their home.

The couple said their son left the house on September 14, saying he was heading to the reserve in his silver Ford Mustang convertible, which did pick up a police ticket there that night.

One swampland search and rescue expert has told DailyMail.com that Laundrie would be lucky to survive three days in the terrifying ‘Jurassic Park’ wilderness.