Dunelm revenues came in just shy of £400million last quarter as the homewares brand benefited from its stores remaining open.

The FTSE 250 company saw strong demand for its winter sale and ‘Summer Living’ range, as well as significant interest in the collaboration it launched with the Natural History Museum.

Sales in the 13 weeks to 26 March climbed 69 per cent to £399million from the equivalent period last year when the group’s outlets were shut while England was experiencing its third national lockdown.

Results: Dunelm’s sales in the 13 weeks to 26 March climbed 69 per cent to £399million from the equivalent period last year when England was experiencing its third national lockdown

During that time, Dunelm customers could only order their wares for home delivery or through a click-and-collect service, leading to a slide in total purchases despite a surge in online trade.

Yet while the share of digital sales has plummeted since then, they represented 35 per cent of its overall revenues in the third quarter.

By that same measure, the firm’s total sales have jumped 40 per cent, while for the financial year to date, they have shot up by over £300million thanks to store and online trade more than doubling.

Dunelm also managed to boost gross margins, which it attributed to selling a smaller-than-expected proportion of its concession items during the winter sale.

This came in defiance of increasing raw material and transportation costs, and the group spending considerable sums to enhance their inventory to mitigate against supply chain difficulties.

The Leicester-based retailer said this had pushed up stockholding costs, but it still expects to make pre-tax profits of between £195million and £215million this financial year, in line with previous forecasts. 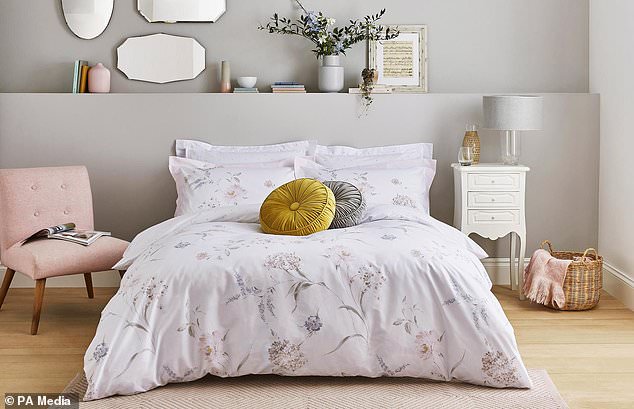 Full-price sales: Dunelm managed to boost gross margins, which it attributed to selling a s2maller-than-expected proportion of its concession items during the winter sale

This forecast comes amidst a worsening cost-of-living crisis affecting Britons, with the UK inflation rate hitting its highest level in three decades and a hike in the energy price cap of nearly £700.

Dunelm chief executive Nick Wilkinson said: ‘Whilst the macro environment remains uncertain, with significant headwinds and increasing pressures on the consumer, our wide product range offers choice for every budget, whether replacing everyday essential items or refreshing a room in your home.

‘The resilience of the Dunelm business model and the ability of our colleagues to adapt quickly to changing circumstances give us confidence in our plans, and we remain well placed to continue to grow market share.’

According to the firm, around 85 per cent of its expansion over the last five years has come about through enhancing its market share, but it also says growth has been boosted by customers buying its products in small amounts.

To help continue this growth, the home furnishings seller began full operations at a new furniture warehouse in Daventry, Northamptonshire and opened a new superstore in Leeds, with another store expected by the end of June.

‘The retail sector is undoubtedly facing a challenging outlook due to both macroeconomic and geo-political pressures,’ remarked Russell Pointon, the director of consultancy firm Edison Group.

Commenting on Dunelm’s performance, he remarked: ‘This is a good set of results, but the retail environment is currently facing potential headwinds on many sides. Investors will keep a close eye on whether this momentum can be sustained.’

Dunelm shares were up 1.8 per cent to £10.79 during the late morning on Thursday, although their value has fallen by over a quarter in the past three months.