What a week. And it’s not over yet by a long chalk. The scandal sparked by Volkswagen caught cheating on its diesel emissions in America has a fair way to run. All carmakers are under the spotlight.

The Volkswagen Group – which includes VW badged cars as well as Audis, Skodas and SEATs – has admitted to fitting 11 million cars around the world with special software that allows its cars to cheat their way through emissions tests. Many of the vehicles are expected to be in this country.

The UK Government has ordered the retesting of all diesel cars to see if other carmakers are up to no good – so far they’ve all denied it.

Furious owners are feeling betrayed. The reputation of a once seemingly impregnable firm has been tarnished. And experts say they expect buyers to steer clear of its forecourts.

Volkswagen subsidiaries such as Skoda – launching its new flagship Superb saloon – will find it anything but superb.

Lawyers say they have been ‘inundated’ with calls from motorists seeing legal redress in the wake of the growing Volkswagen saga.

Annual road tax could be affected if ministers increase rates to allow for cheating. Vehicle Excise Duty (VED) is based on how much a car pollutes – and false readings could lead to higher taxes in future.

Motorists are expected to take advantage of the new Consumer Rights Act, which comes into force in October and allows consumers to band together in ‘collective actions’ against companies, say legal experts. The £5billion put aside by VW to cope with a recall will be dwarfed by class actions at home and abroad.

Jacqueline Young, head of group litigation at lawyers Slater & Gordon, believes that owners and car dealerships will both have viable legal claims for breach of contract, given that they have purchased the car based on misrepresentations which have devalued the vehicle.

Volkswagen shareholders in Britain may also have a case against the company, she believes, given the 30 per cent slump in its share price this week.

She said: ‘People pay more for a diesel because they make an active choice to buy a “green” car with good fuel economy. Diesel cars are usually about £2,000 more expensive than petrol versions. But if that car is suddenly worth less because it has depreciated in value, then you may have a claim.’ A spokesman for solicitors Leigh Day said: ‘We have been inundated by motorists and expect the number of claims to reach the thousands, making it the largest group claim in UK legal history.’ Consumers may be able to demand a refund for the car or costs to cover repairs to meet the standards, and consequential losses, which could include the VED tax issues.

Pride, they say, comes before a fall. Two years ago, I was with Volkswagen in Germany when that nation’s respected news magazine Spiegel ran a feature and front cover about the car giant’s ambition.

The cover, above right, features a red VW car bearing its jagged teeth with the headline: ‘The Attack – how Volkswagen is overrunning the world.’ Even longstanding VW executives raised an eyebrow. Spiegel painted a startling portrait of the autocratic Volkswagen ‘ruler’ Prof Martin Winterkorn and noted: ‘Above all, three aspects are interesting: how does it play when Germans rule the world? How is it possible to hold together a giant empire? What happens when someone has so much power as Martin Winterkorn?’ Well, now we can have a good guess at the answer. 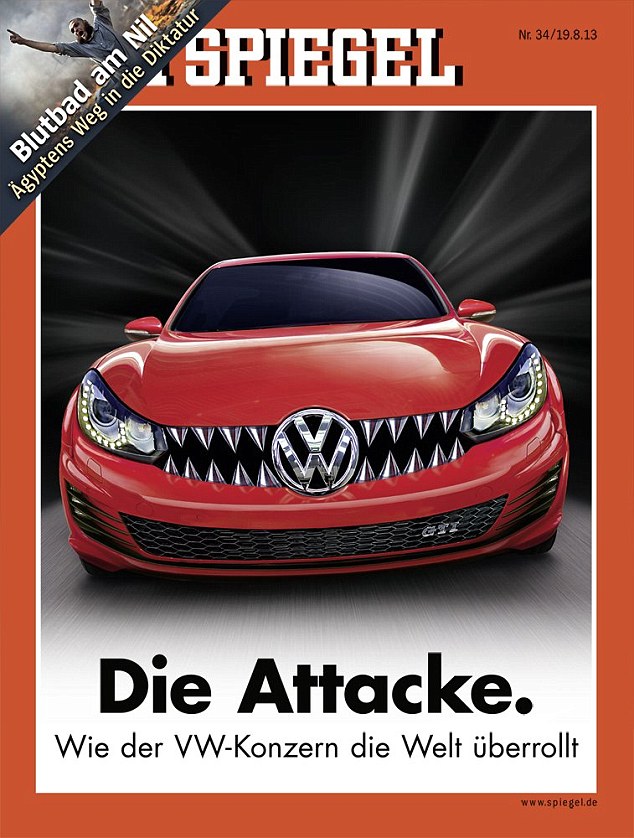 Pride before a fall: VW on the attack two years ago

In another case of bad timing, Vauxhall lost its chairman and managing director Tim Tozer this week – just as it was launching its new British-built Astra.

An insightful car boss who had a good understanding of Vauxhall customers, his sudden departure from the firm – a subsidiary of General Motors – was the talk of the motoring world.

Having been appointed to nurture the Vauxhall brand, I hear he had a run-in with corporate beancounters demanding higher sales than Tozer believed were achievable for the car built at Ellesmere Port in Cheshire. Rather than discount the cars heavily, he decided to leave. Vauxhall’s loss will be someone else’s gain.

Dont’t complain if you get stuck behind one. But Land Rover’s goanywhere Discovery has taken three top honours at The Caravan Club’s Towcar of the Year Awards 2015.

The club’s judging panel voted the Discovery HSE Luxury its overall winner as well as the top model in two classes – for all­ wheeldrive vehicles of more than 1,800 kg and for vehicles priced in excess of £50,000.

Judges at an awards ceremony held at the RAC Club in London praised the model, with special mention for its ‘rock solid stability, masterclass hill starts, and its electric parking brake, which holds really well and releases automatically when pulling away’. 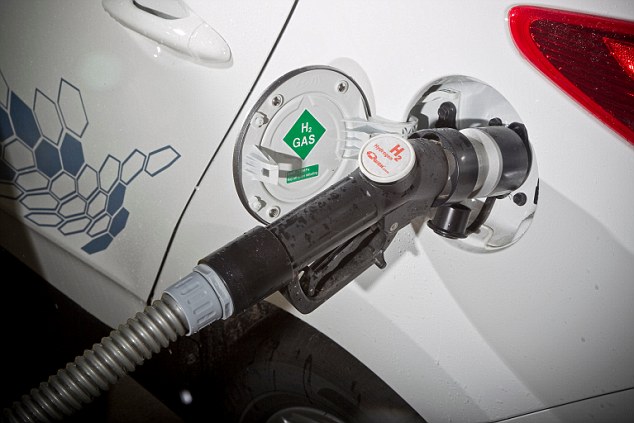 At the pumps: New hydrogen station

The launch was supported by Hyundai, Toyota, and Honda, who brought their fuel cell electric vehicles for guests to try. They included the Hyundai Ix35, the Toyota Mirai, the Honda FCX Clarity and a British Microcab.

The hydrogen enters the fuel-cell and reacts with oxygen to generate electricity which drives the car’s motor – while pure water then comes out of the exhaust pipe.

The self-generating hydrogen refuelling station is based at the Advanced Manufacturing Park, just off the M1 in South Yorkshire between Sheffield, Rotherham, Barnsley and Doncaster.

Powered by a wind turbine, the site is open to the public and capable of producing 80 kg of hydrogen a day, enough for 16 fuel cell cars in one 24-hour period.