Orthodox Jewish demonstrators torch face masks, stop traffic and assault reporters as they return to Brooklyn streets to protest COVID-19 restrictions – despite uptick in cases in their neighborhoods

Borough Park’s streets were scenes of chaos Wednesday night as members of the community forced a photographer to retreat to his car and made police report to the scene as a scuffle broke out involving a television reporter.

‘Here in Borough Park, we don’t go by the laws of America,’ one demonstrator shouted, the New York Daily News reports. ‘We have our own laws.’ 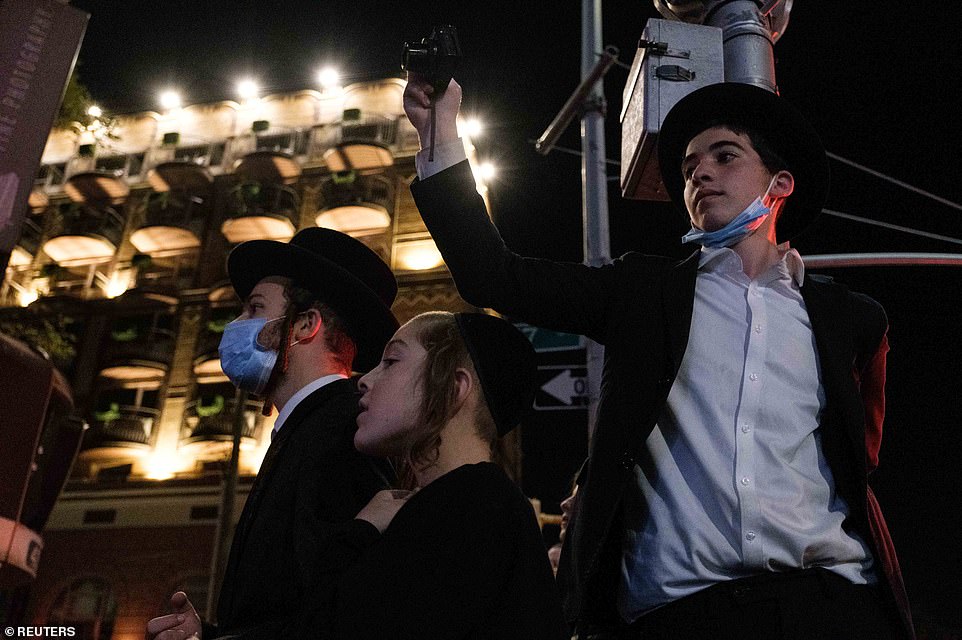 Protestors insisted that health restrictions were religiously motivated, stopping traffic as they took to the streets

‘I was just brutally assaulted, hit in the head, and kicked at by an angry crowd of hundreds of community members of the Boro Park protest — while yelling at me ‘Nazi’ and ‘Hitler’ —after Heshy Tischler recognized me and ordered the crowd to chase me down the street,’ Kornbluh said in a late night tweet,

Protesters insisted that health restrictions were religiously motivated, stopping traffic as they took to the streets. Demonstrators started a bonfire with protective masks, forcing an FDNY truck to retreat as firefighters feared for their lives. 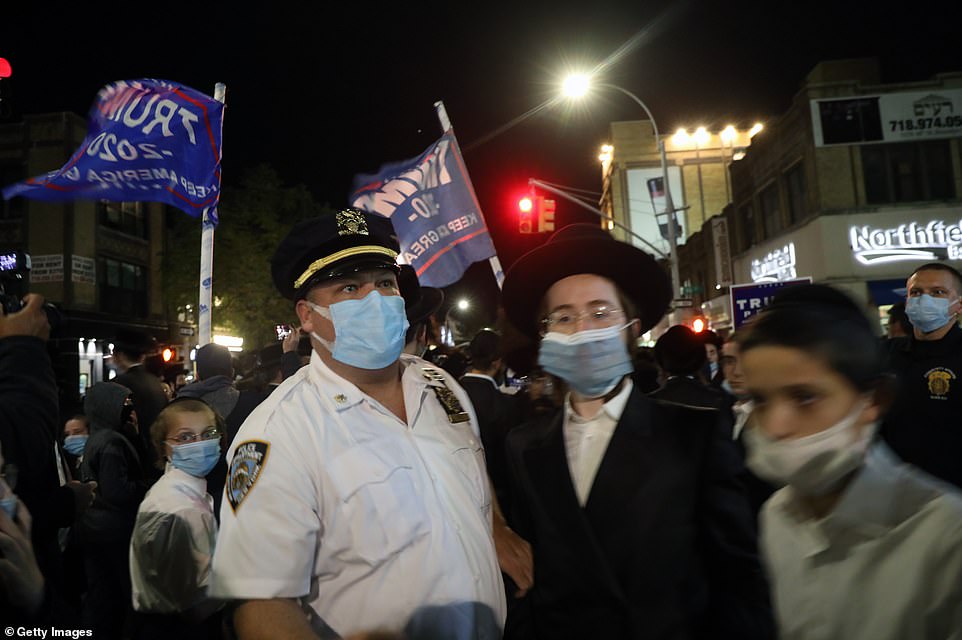 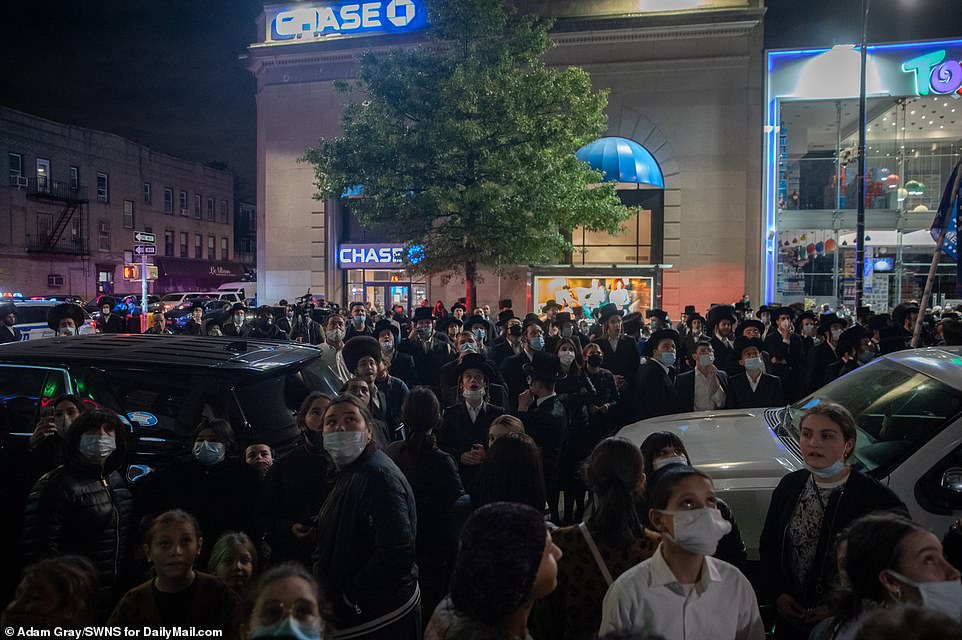 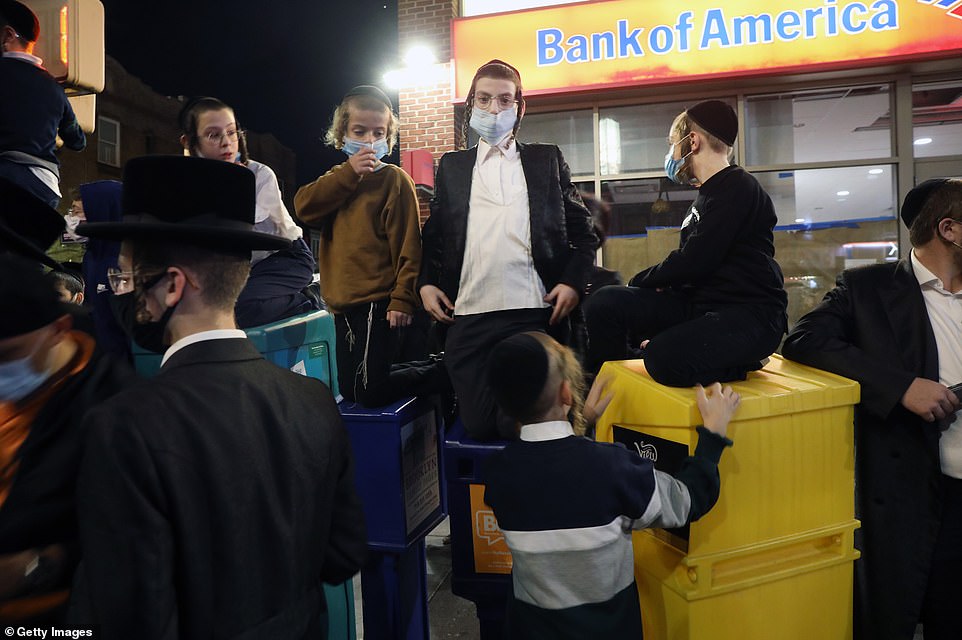 Young members of the Hasidic community gather for the demonstrations

‘The real reason, what’s going on, is that this is Trump country,’ said Heshy Fried. The 57-year-old sported a ‘Trump 2020’ face covering Wednesday morning.

He added: ‘All the areas they are trying to close down … are like 90% voting for Trump. It’s political and everybody knows it.’

No arrest were made in the demonstrations.

On Tuesday, a crowd hurled bottles and rocks at Berish Getz as he filmed video from a lamppost. He wound up needing to be carried out on a stretcher. 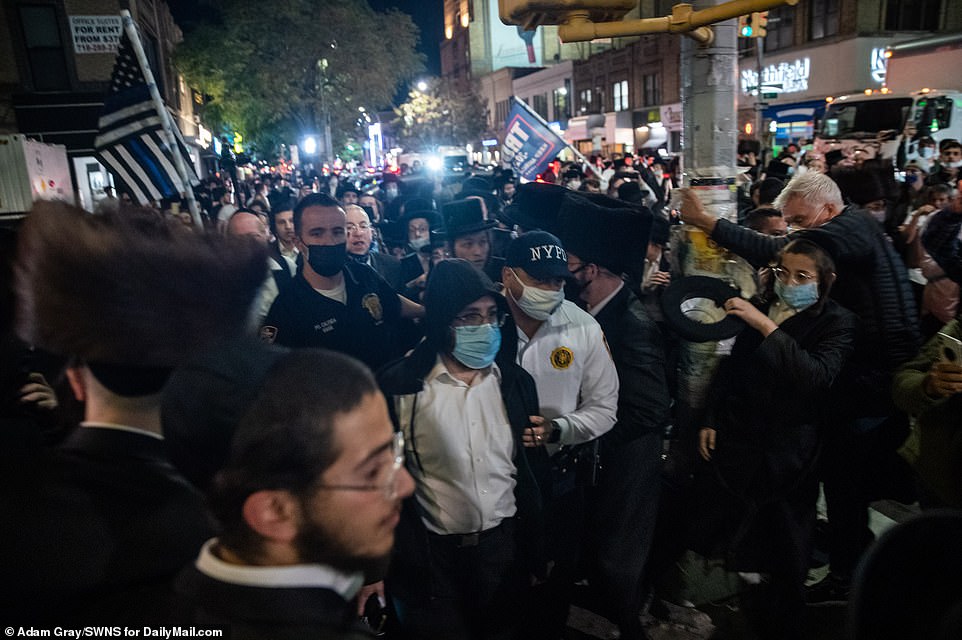 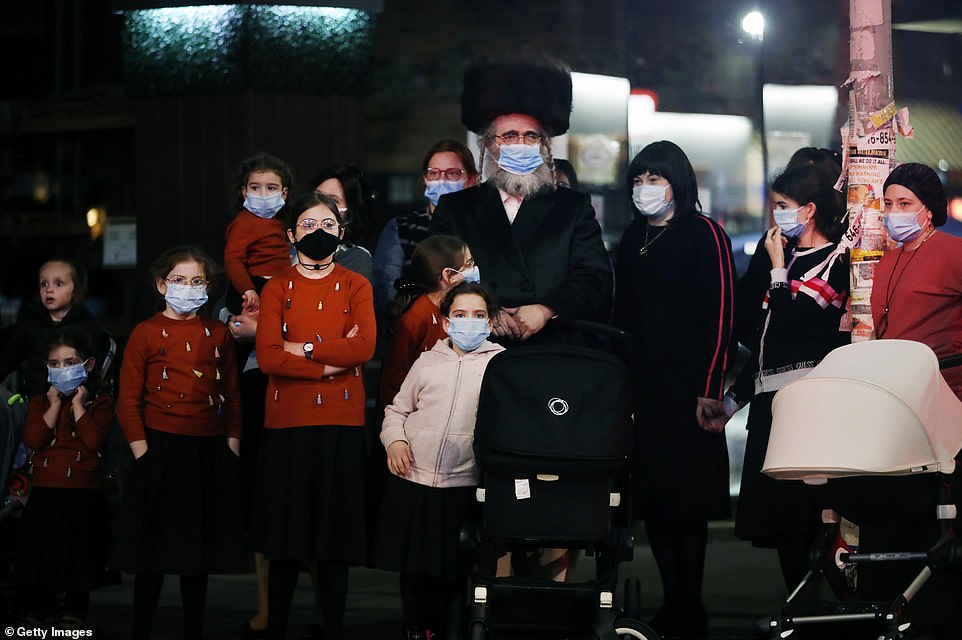 A family watches as groups of protesters gather in Borough Park 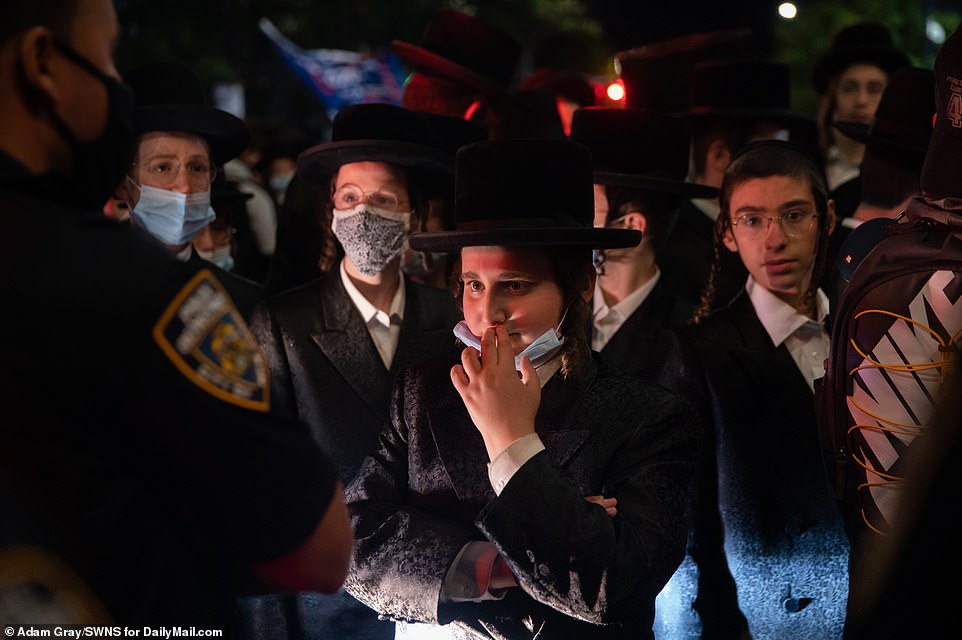 Borough Park has seen an uptick in COVID-19 infections, with more than eight per cent of their tests in their major zip code coming back positive

‘Good news,’ tweeted Mordy Getz, the victim’s brother. ‘My brother is now conscious and went thru scans to see what injuries his body got from the attack … We want full investigation and prosecution. Machers already trying to shut the story.’

Borough Park has seen an uptick in COVID-19 infections, with more than eight per cent of their test in their major zip code coming back positive. New restrictions in the city start on Thursday, 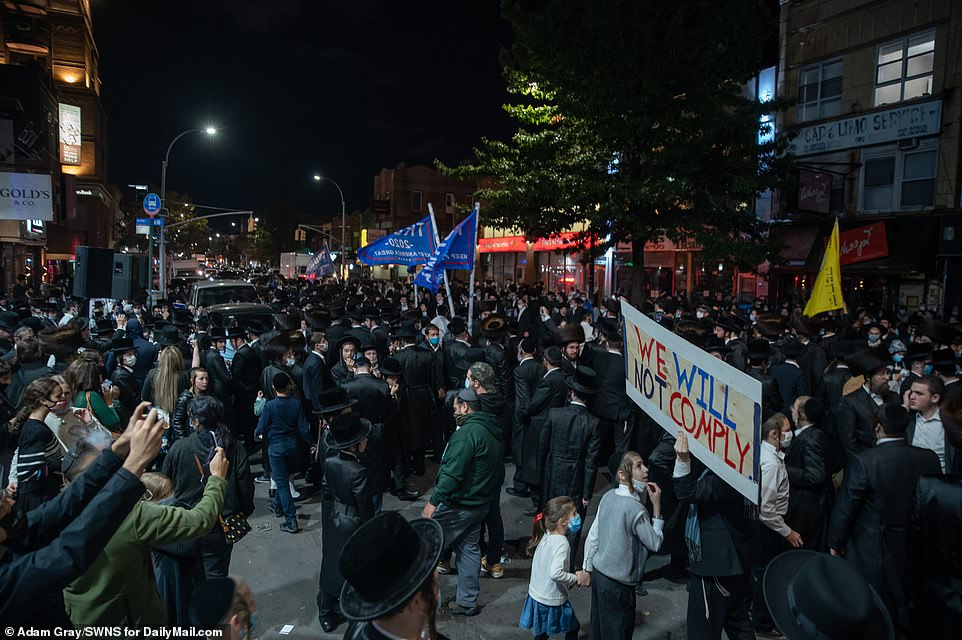 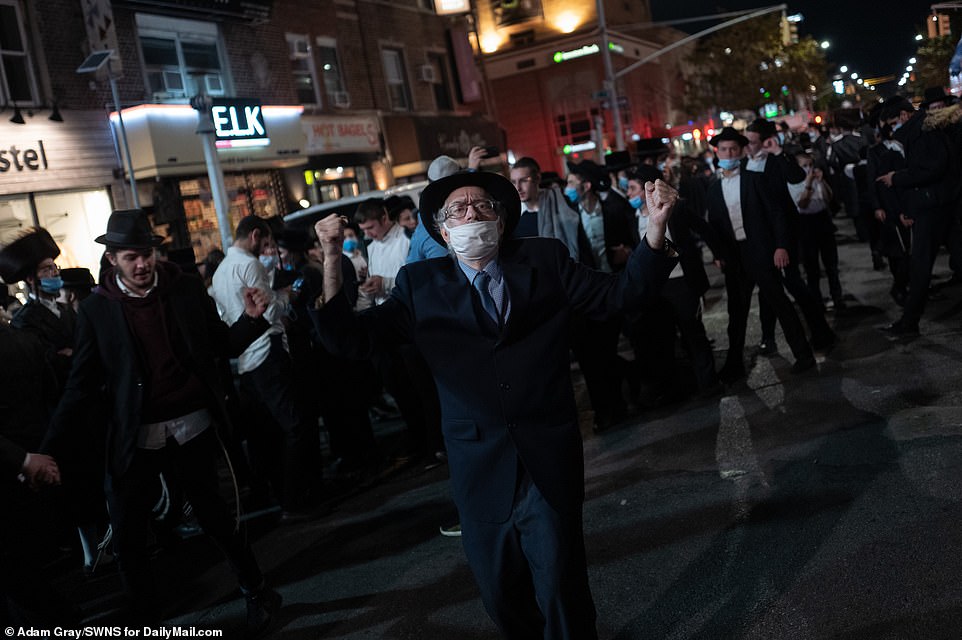 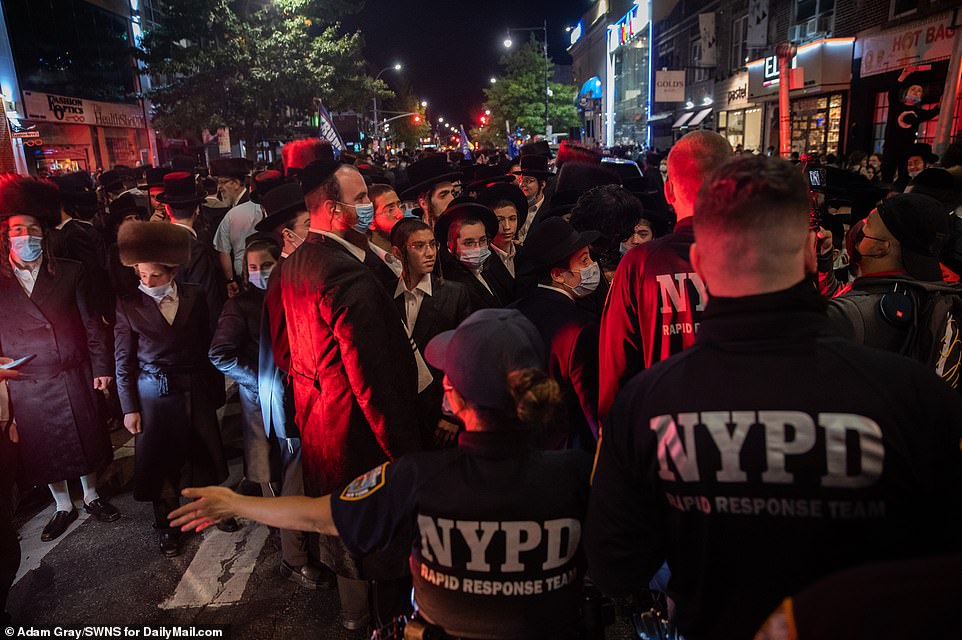 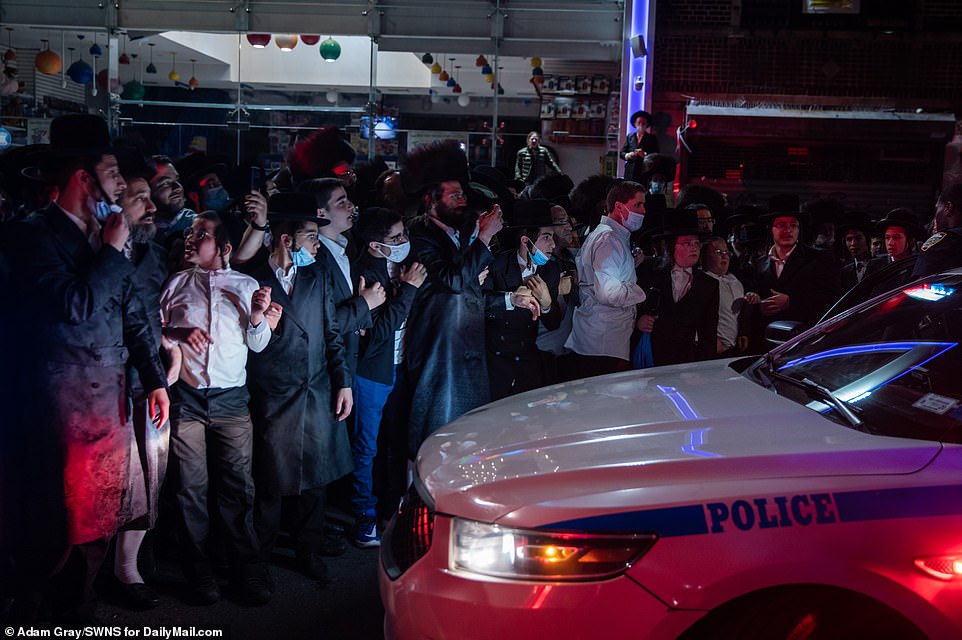