TV presenter Jeremy Clarkson has turned up to a town hall meeting for a showdown with angry locals this evening about his controversial plans to develop his Diddly Squat farm shop that has caused chaos in their tranquil Cotswolds village.

The former Top Gear host, 61, called the meeting at the Memorial Hall in Chadlington, Oxfordshire to quash neighbours’ fears about the growing popularity of the shop, which opened less than a year ago, and its impact on the rural community.

Hundreds of fans from across the country have queued for hours to get inside his beloved Diddly Squat Farm Shop ever since Clarkson’s Farm landed on Amazon Prime this summer and unexpectedly took post-lockdown Britain by storm.

Police were even called out to manage traffic chaos in June, caused by hundreds of Clarkson fans descending on his farm in the hope of meeting the TV presenter and to check out his stock, which includes honey, chutney and T-shirts.

But villagers remain divided about the surge in tourists to Chadlington, with some saying it has put the village on the map and boosted the local economy while others are concerned it could transform the community for the worse.

Mr Clarkson has now applied for planning permission to develop the site, and invited locals to join him in the village hall tonight from 7pm to discuss the farm shop and to also enjoy some cheese and wine.

Posters around the village read: ‘As there seems to be some debate in the village about what’s going on at Diddly Squat, Jeremy Clarkson will be at the Memorial Hall to explain his plans and to take any questions you may have.

‘Everybody from the area is welcome to attend. Cheese and wine will be provided.’ 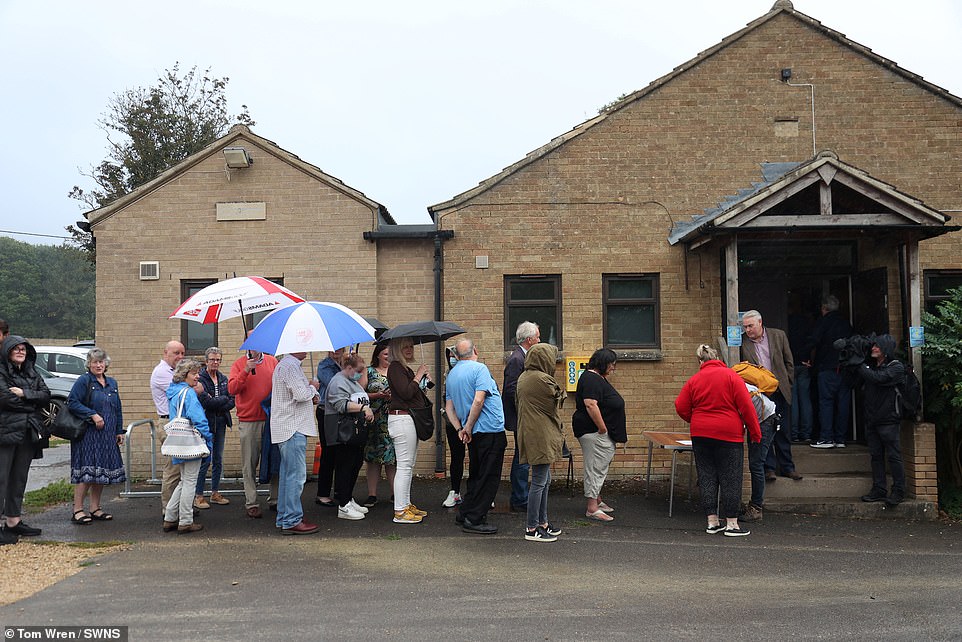 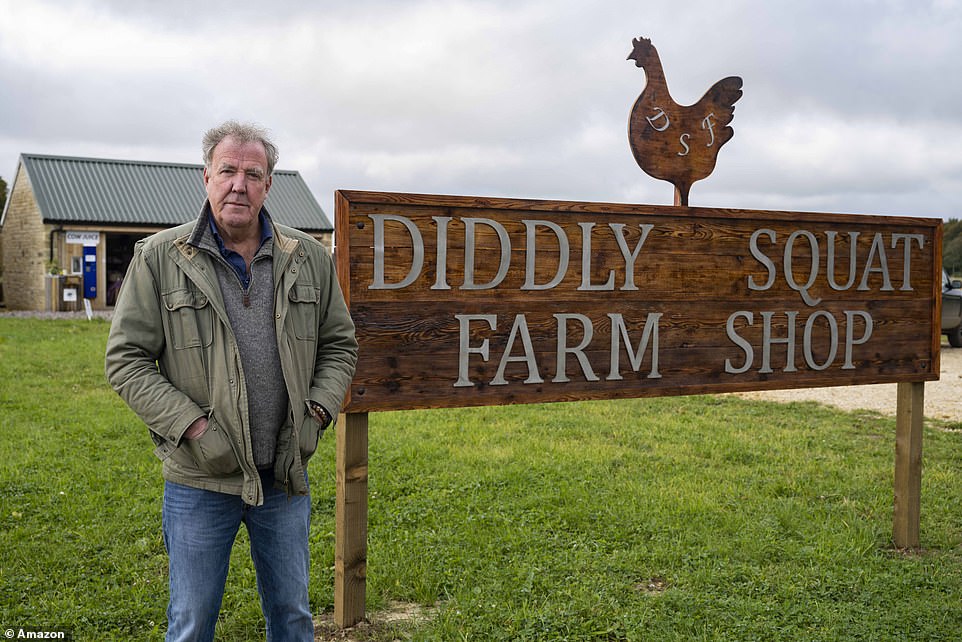 Jeremy Clarkson (pictured) called a meeting at the Memorial Hall in Chadlington, Oxfordshire, at 7pm after hearing rumours of concerns about his exceptionally popular farm shop 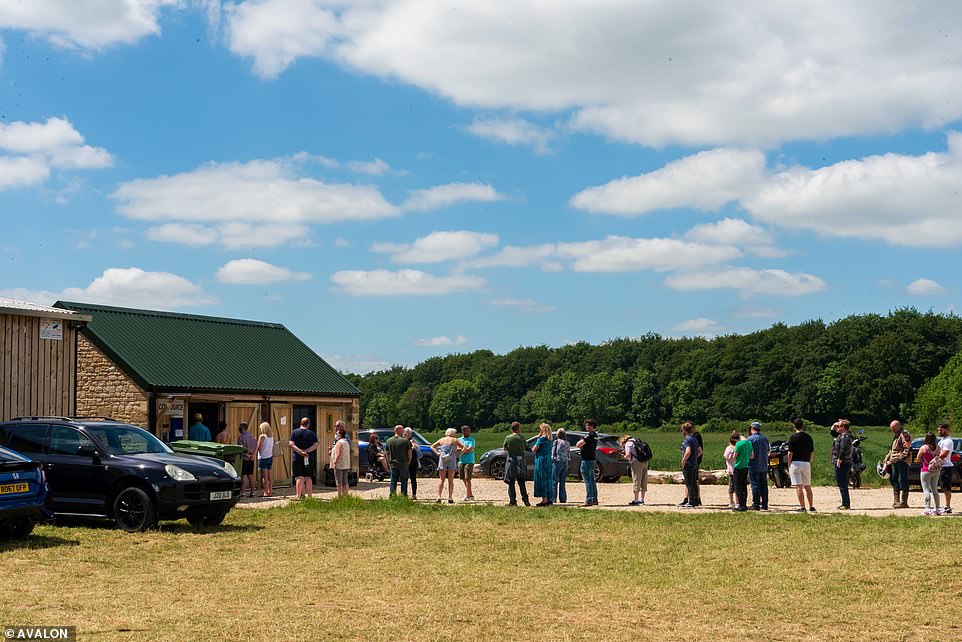 The popularity of Clarkson’s Farm on Amazon Prime has led to queues for the Diddly Squat Farm Shop, with neighbours growing concerned with the increase in traffic in the area

Initially posted on the village community Facebook page, one person suggested that the meeting would be packed, joking that Mr Clarkson might need a larger venue like the Royal Albert Hall.

Chadlington Parish Council said it had no objections to Mr Clarkson’s planning application, but, if approved, it should not confirm a change of use status for this agricultural building.

It pointed out that in November 2020, an application had been made to convert a lambing shed adjacent to the shop into a café and in February 2021 for a licence to sell alcohol and provide entertainment.

‘The parish council remains concerned regarding the effect of the incremental development at this location, both upon the local community, its existing shops and an Area of Outstanding Natural Beauty,’ it added.

‘The number of cars currently visiting this site is already substantial, often filling the existing available parking space and overflowing onto the Chipping Norton Road, which is hardly desirable in an AONB and creates a significant risk that accidents will occur.’ 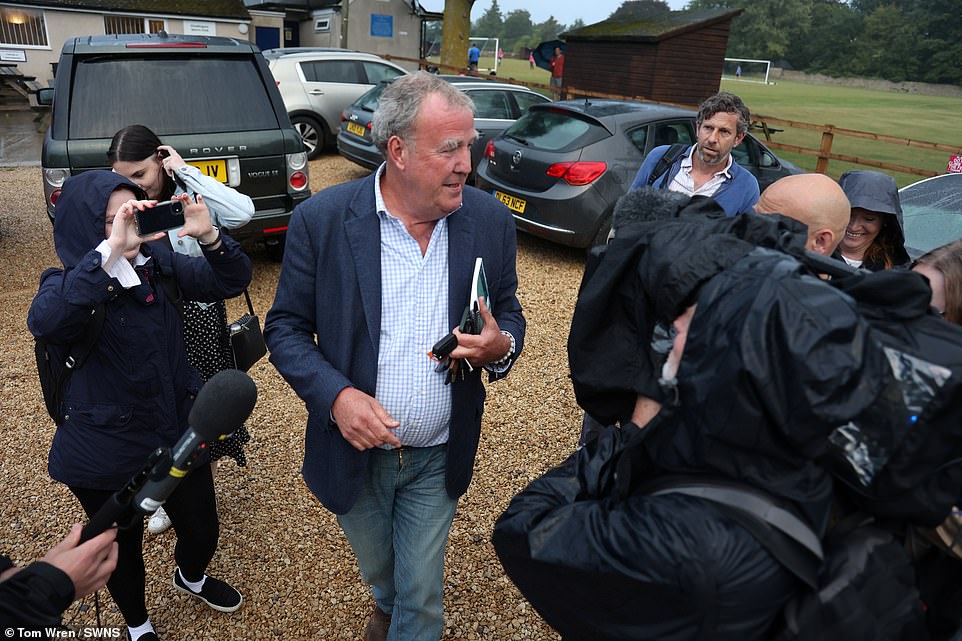 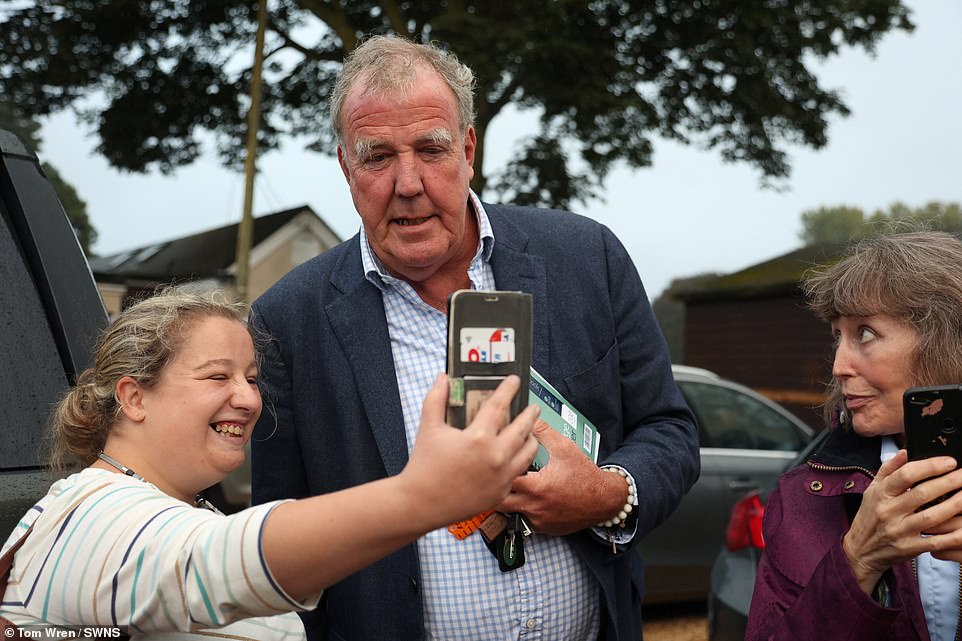 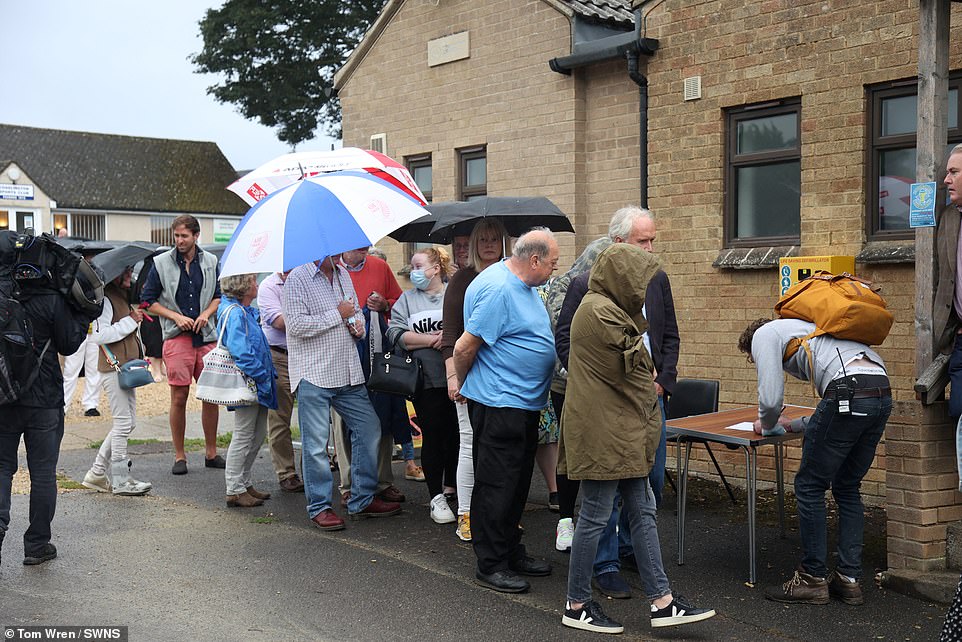 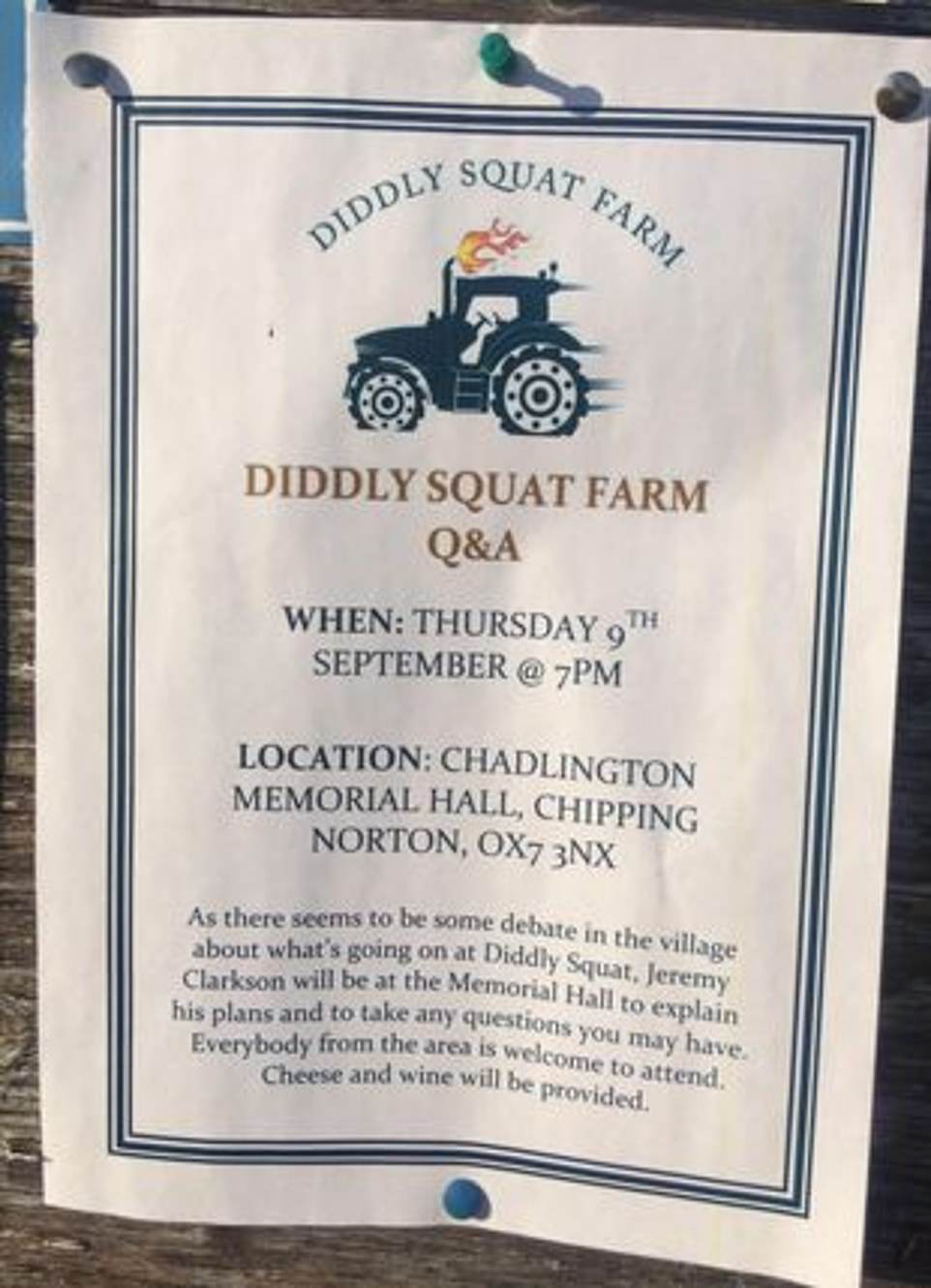 To quell his neighbours’ fears, Mr Clarkson has invited the local community (poster pictured) to join him in the village hall at 7pm to discuss the farm shop and enjoy cheese and wine

Searches for homes to buy in Chadlington jumped by 511 per cent in June 2021, when compared to the same period in 2020, according to property website Rightmove.

The website suggested viewers have been captivated by the local countryside and looked at homes for sale in and around the area where Clarkson’s Farm is filmed.

On Clarkson’s Farm, Mr Clarkson works on his 1,000 acre plot of land, located between Chipping Norton and Chadlington in the idyllic Cotswolds countryside in Oxfordshire.

The former petrol-head appears to have settled for a serene farming lifestyle as part of his new hit Amazon Prime series. 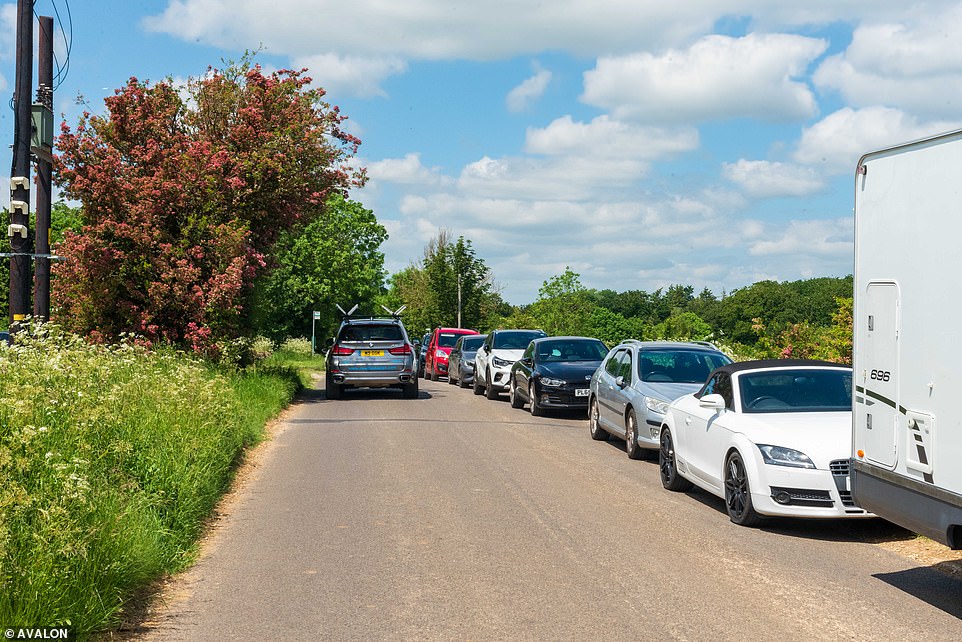 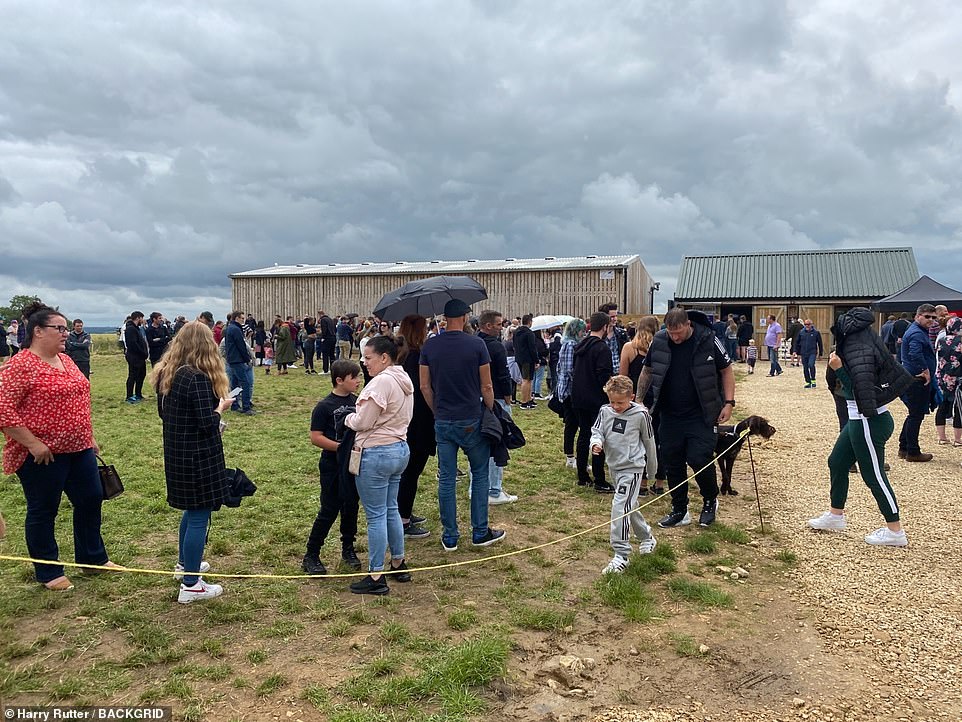 Those in attendance didn’t seem to mind though, with several tweeting about the ‘great atmosphere’ on display

But the show’s roaring success – and the opening of Clarkson’s popular Diddly Squat Farm Shop – has created chaos for villagers who are more accustomed to cows than congestion.

Speaking previously about the farm shop’s success, Mr Clarkson said: ‘I mean, if we’d built a nuclear power station I could understand their concerns, but not a tiny farm shop.’

The broadcaster bought the plot of land in 2008 and Clarkson’s Farm follows the presenter’s highs and lows of tackling the 1,000 acre working farm.

The presenter recently revealed he was ‘the happiest he has ever been’ and that he ‘loved every second’ of filming the new hit show. His Diddly Squat shop is described as a ‘small barn full of good, no-nonsense things’ on its official website.

The Amazon Prime series follows an intense and frequently hilarious year in the life of Britain’s most unlikely farmer and his team, as they contend with the worst farming weather in decades, disobedient animals, unresponsive crops, and an unexpected pandemic.