It’s just not cricket! Moment furious batsman hurls bat at his partner after getting run out in chaotic village match that has sports fans stumped

A furious cricketer was caught on camera hurling a bat at his partner during a village match so chaotic that the footage has gone viral.

A clip of the match, thought to have been played in an English village, has notched up more than 1.4 million views on Twitter alone since it was shared on Sunday.

He hits a shot towards mid-off and he and his partner M Evans begin going for a run.

But they realise too late that a fielder has the ball.

During a friendly match believed to be played in a village in England a team called Mamba manage to get a good start to their innings with a score of 38/0 in 4.1 overs 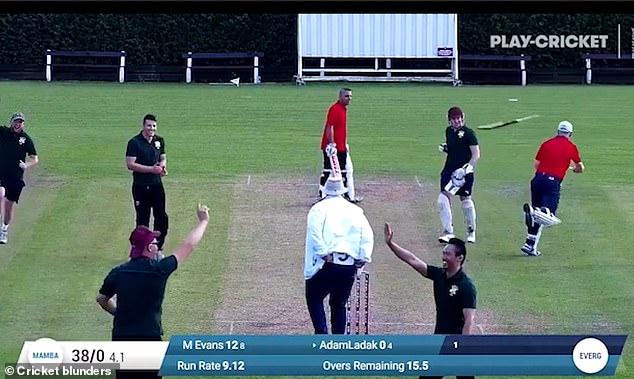 Then player Adam Ladak is seen going up to play and hits a shot towards the mid-off region. But once he started running he realised the ball was going directly to one of the fielders

It is then returned to the non-striker’s end and Evans is run out.

As the partners remonstrate with each other, Evans storms off and swings his bat in anger.

But the bat flies out of his hand and smacks his teammate straight in the face. 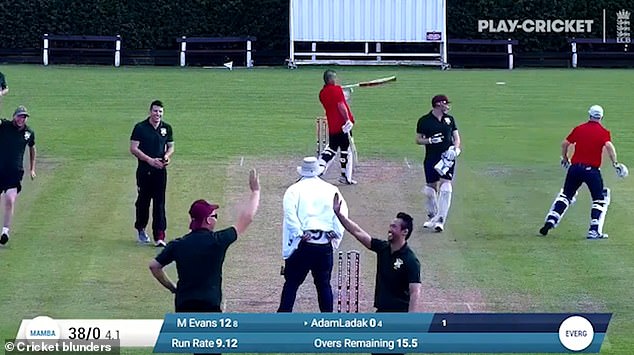 In his frustration Evans storms away swinging his bat. It loops through the air and smack his teammate straight in the face

Evans immediately runs toward Ladak to apologise and check if he is okay.

The opposition seemed to ignore this and just carried on celebrating taking the opening wicket.

The video has since gone viral online and left viewers in stitches.

Lou Gilbert said: ‘The more I watch it the worse it gets.’ 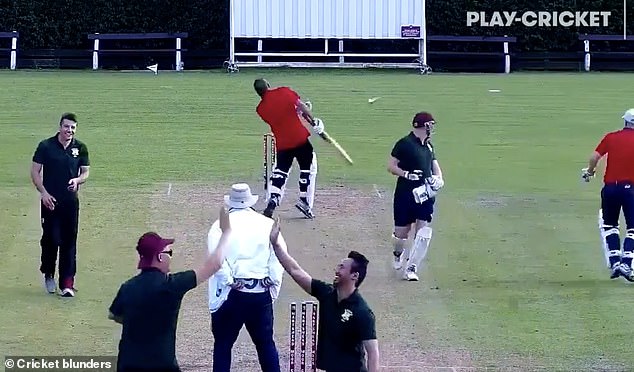 One fan joked: ‘What am I watching?’

Another said: ‘Can anyone explain to me the scorecard is 4.1 overs, 38 runs without loss of wicket.

‘But the batsmen’s scores are 12 from eight balls and 0 from four balls.’