Fur sales will be banned after Britain leaves the EU’s single market and customs union in December under proposals being drawn up by ministers.

Lord Goldsmith, the Government’s animal welfare minister and a close friend and political ally of Boris Johnson and his fiancee Carrie Symonds, is understood to be spearheading the move.

The Government is considering plans to prohibit the import of wild animal fur into the UK that would essentially forbid the sale of clothes containing fur in shops after the transition period.

The change would affect imports of nearly £200million of fur and fur-based products every year, many of which come from mainland Europe.

Defra — the Department for Environment, Food and Rural Affairs — is expected to publish a consultation paper after the transition period ends this year.

Leaked Defra documents seen by The Daily Telegraph showed Lord Goldsmith met with the executive director of anti-fur organisation, Humane Society International, on May 12 in which he asked if there were any particular areas, in relation to the fur trade, that the Government should research.

Lord Goldsmith, the Government’s animal welfare minister and a close friend and political ally of Boris Johnson and his fiancee Carrie Symonds, is understood to be spearheading the move 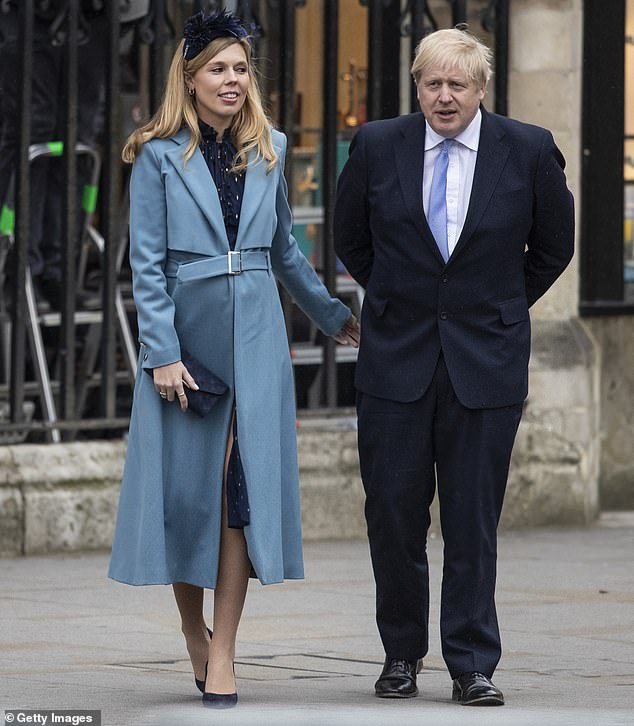 Ms Symonds has called people who wanted to buy fur ‘sick’. She has also campaigned against whaling, and reportedly swayed Mr Johnson in his decision to axe a proposed badger cull

The peer called the fur trade ‘one of the grimmest of human activities’ in 2018 and said the Government is ‘very keen’ to take action against it post-Brexit.

‘We have some of the highest welfare standards in the world,’ Lord Goldsmith told The Mirror last year. ‘Fur farming has rightly been banned in this country for nearly 20 years and at the end of the transition period we will be able to properly consider steps to raise our standards still further.’

The Defra minister has also argued that Brexit meant that ‘whatever barriers may have prevented us from raising standards on imports at the point of entry will have gone’.

‘We will be free to decide whether we want to continue to import the proceeds of one of the grimmest of human activities,’ he previously said.

Last year, Ms Symonds blasted people who wanted to buy fur as ‘sick’. She has also campaigned against whaling, and reportedly swayed Mr Johnson in his decision to axe a proposed badger cull in Derbyshire.

Fur farming was banned in 2003 but the UK still allows the product to be imported from overseas and France is one of the biggest suppliers. 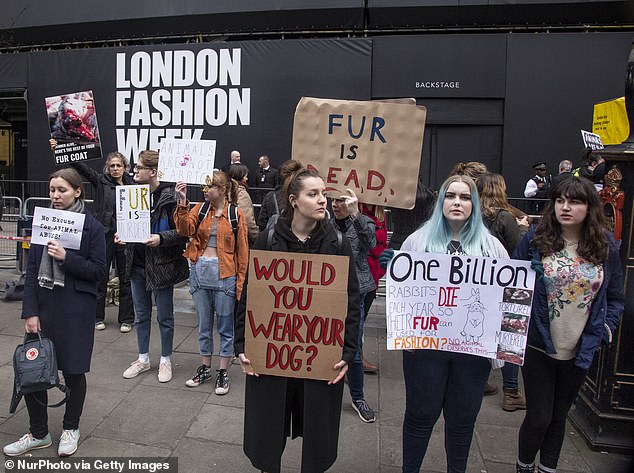 Ministers believe a move to ban fur would buy hugely popular, with opinion polls indicating that around 80 per cent of Britons think the trade is unacceptable (pictured, protesters stand in front of British Fashion Council show space during London Fashion Week)

Under the terms of the Withdrawal Agreement, fur could still be imported into Northern Ireland.

Ministers believe a move to ban fur would buy hugely popular, with opinion polls indicating that around 80 per cent of Britons think the trade is unacceptable.

However, the British Fur Trade Association, which represents importers and sellers, has said it will lobby against the ‘irrational, illiberal and misjudged’ proposed ban.

In a report available on its website, the group said: ‘Sales of natural fur in the UK have increased in recent years and are popular among younger age groups, as environmentally conscious consumers increasingly reject the mass-produced non-renewables epitomised by the fast fashion crisis and search out long lasting, sustainable natural materials.

‘Yet, animal rights groups are now actively and vocally lobbying the British Government for fur sales to be banned in the UK using selective data, arguments and anecdotal evidence.

‘Such shrill voices, of course, do not represent the ‘silent majority’ who do not support such a ban; opinions that should not be ‘cancelled’ but recognised and respected.

‘Those that shout the loudest seldom have the support of the majority or their moral backing.

‘Although they would never admit it, such groups would achieve their aims far better by working with the organised fur sector to drive up standards as cooperative models in other sectors have shown.’