The distraught mother of one of the victims of the Gold Coast helicopter tragedy has collapsed and had to be helped by mourners at her daughter’s funeral.

Rita Jaja was overcome with emotion as Vanessa Tadros, 36, was farewelled by around 100 friends and family at St John The Beloved Church at Mt Druitt, Sydney.

Ms Tadros, 36, died in the horror crash on January 2, along with three other victims, including Ron and Diane Hughes, who were on honeymoon from the UK when the joy flight turned disastrous.

Rita Jaja, mother of Vanessa Tadros, 36, was overcome with emotion at her daughter’s funeral 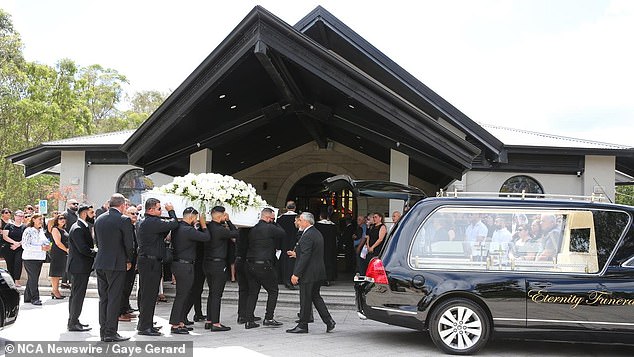 Vanessa Tadros, 36, was farewelled by friends and family on Monday at St John The Beloved Church at Mt Druitt, Sydney 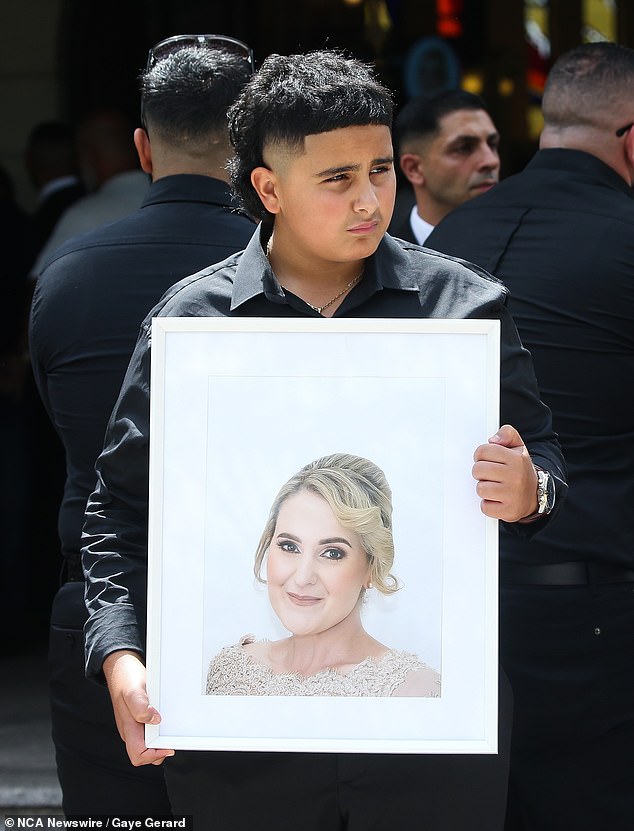 Vanessa Tadros, 36, (whose portrait was held by one young mourner) died in the horror crash on January 2, along with three other victims 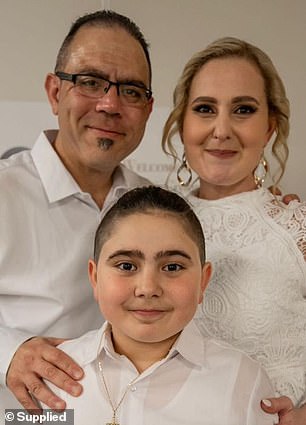 Large white floral bouquets filled the inside of the church and adorned the white coffin that sat at the centre of the large service.

Ms Tadros’s husband, Simon, flew back from their son’s hospital bedside in Queensland for the ceremony and was seen kissing his wife’s coffin before it was taken inside the church.

Their son Nicholas, 10, survived the crash with major injuries but has now come off life support.

In a tearful tribute, Mr Tadros called his wife his ‘beautiful rose’ and thanked everyone for coming to the Maronite ceremony.

Hew added: ‘To my beautiful wife, I will always love you, no matter what.

‘I know you will always be with me and Nicholas. Rest in peace beautiful.”

The family were visiting the Gold Coast on holiday when the fatal crash happened. 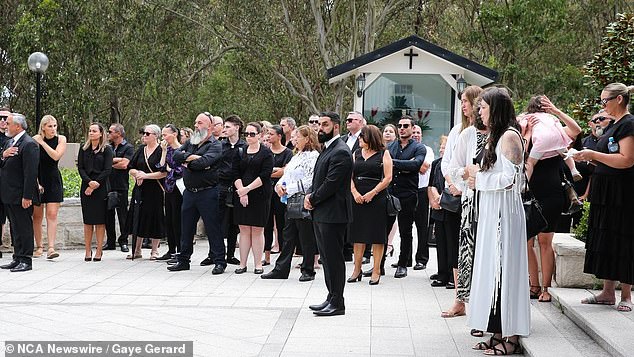 Family and friends (pictured) gathered to remember the devoted mother 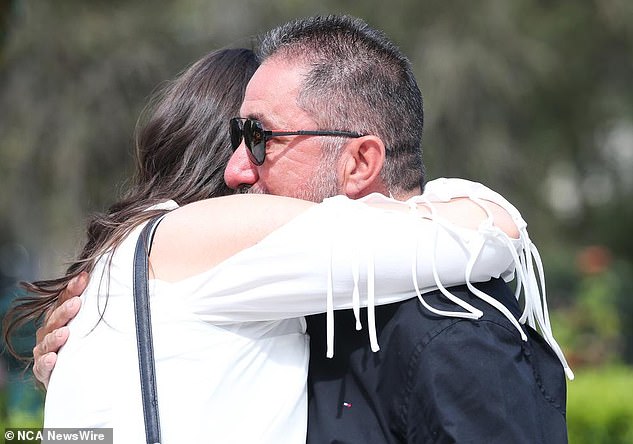 Mourners began gathering at St John The Beloved Church at Mt Druitt, Sydney, at 10.30am on Monday for the service for Vanessa Tadros 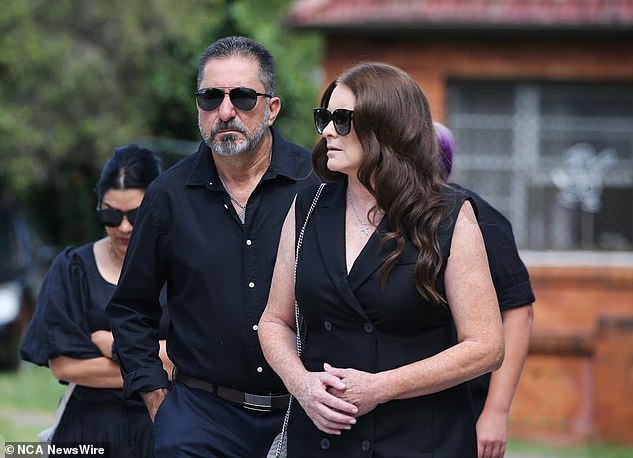 He has undergone five operations for surgery over six hours on broken bones in both legs and his left hand, revealed Mr Tadros.

‘Nicky has been off life support now for a few days and his body has responded very well, still on the ventilator machine to support his breathing,’ he said in a Facebook update.

‘They have lowered his sedation medicine at times to see if he is responsive and he has woken up and able to respond to some questions with a nod or shake of the head.

‘He is also able to hold my hand but still no movement in his legs yet but have been advised that could be due to the broken bones in both his legs.

‘Due to the pain and distress and anxiety levels they have had to sedate him again for now.

‘He has a couple of surgeries next week. One on Tuesday and a major operation on his right ankle on Friday, so pray that all goes well.’ 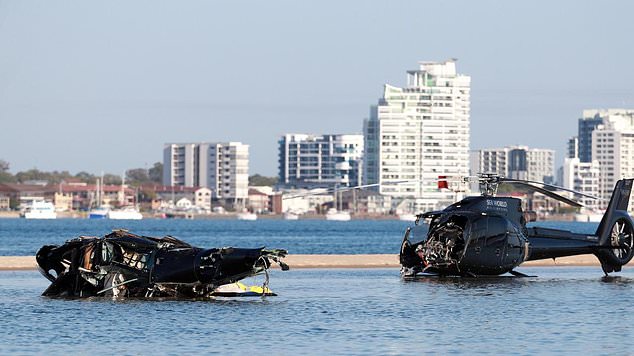 Helicopter chief pilot Ashley Jenkinson  and newlyweds Ron and Diane Hughes, on honeymoon from the UK, were also killed in the crash 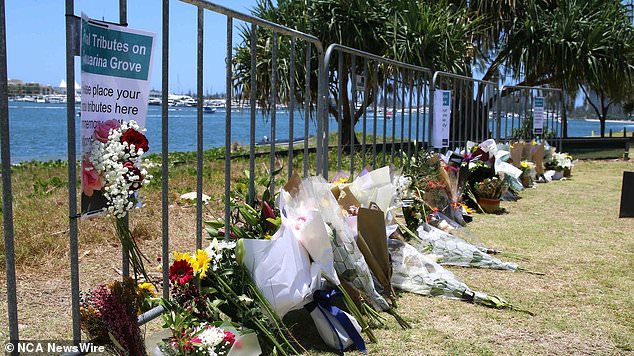 On Sunday, about 200 mourners formed a human chain near the site of the crash as part of a vigil for the people affected by the fatal incident.

The ceremony was held at Broadwater Parklands, metres from where four people died when their joy ride from the popular Queensland theme park went terribly wrong.

Participants were invited to join hands in a ‘chain of support’ for those killed, the survivors, and their families. 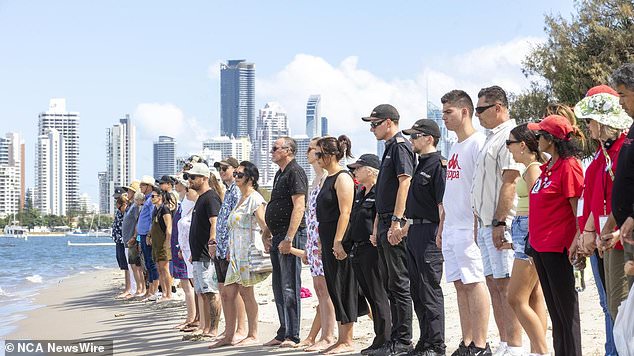 On Sunday, about 200 mourners formed a human chain near the site of the crash as part of a vigil for the people affected by the fatal incident 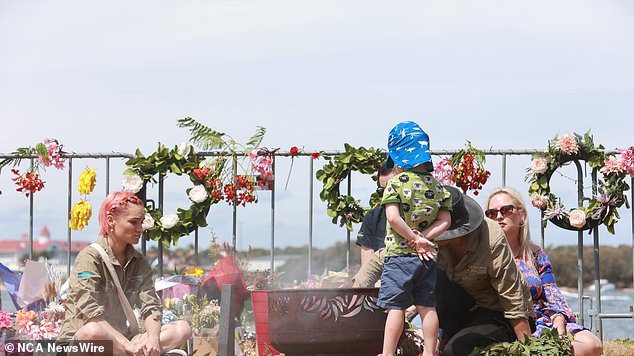 ‘I felt it was very important that people came together, acknowledged it and showed support for each other and for the families. ‘Ms Clarke thanked everybody who had supported the community and the victims in the wake of the crashy, especially the Kombumerri traditional owners.

‘We all felt it, we all got really sad feeling such a tragedy on our country,’ she told NCA NewsWire.

‘We’re very connected so we can feel the country’s hurting and the people, the community. And we need community to help us, so we’re here for them.’

Ms Dillon welcomed attendees to country and invited them to participate in a smoking ceremony in which they had ochre painted on them.

Lemongrass was added to the small eucalyptus fire to help heal the area from the hurt inflicted on it by the crash.

The group then walked down to the shore where people, including strangers, held each other’s hands and looked across the water towards Sea World to pay their respects.