The family planning industry is booming in the US, surpassing $800million in investments as more families look to fertility services to build a family.

Assisted reproductive technology (ART), an umbrella term for fertility treatments such as IVF, has been helping women conceive for decades but has recently seen an increase in demand.

This has led to a wave of investors eager to get in on the burgeoning family planning industry. In 2022 alone, the industry received $800million in venture capital funding, more than double the figure from 2019.

These planning services are often used by families hoping to have children later in life – when they are less fertile. Many American families are pushing back having kids to later in life, focusing on travel and their career during their 20s and early 30s.

But doctors worry that its growing popularity lulls would-be mothers into a false sense of security that IVF treatment will work for them.

More than $800million in venture capital funding was invested in fertility technology in 2022, more than five times the amount the industry received in 2015 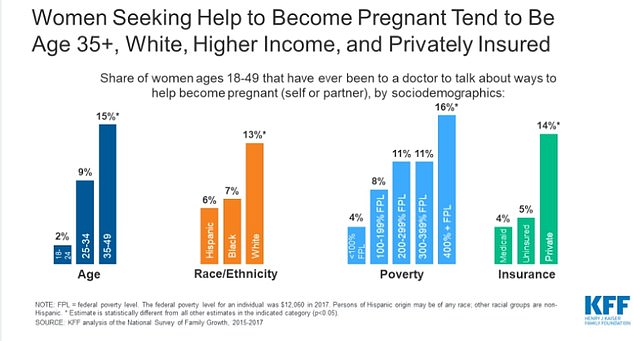 Women who seek fertility treatments are more likely to be older, white, rich and have private health insurance, according to a KFF study 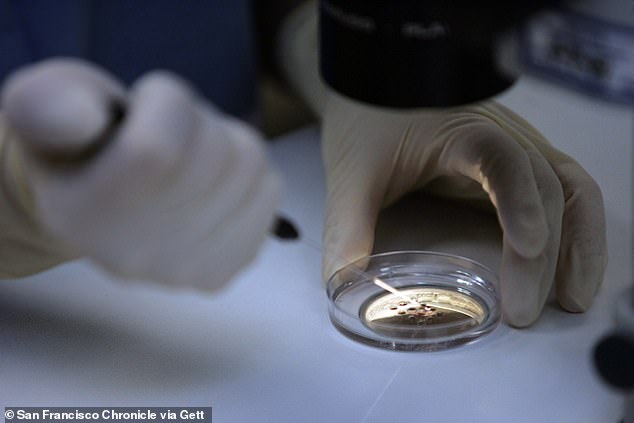 There are different forms of assisted fertility. The most popular form, in vitro fertilization, or IVF, works by fertilizing a woman’s egg in a lab environment and then implanting it into her uterus (file photo)

Angela Rastegar, CEO of the German venture capital firm Sunfish Partners, told Axios: ‘We believe the ability to build a family is a basic human right.’

The most common form of ART is in vitro fertilization, known as IVF, where the egg is fertilized in a lab environment and then implanted into a woman’s uterus.

Another popular form is gamete intrafallopian transfer, where the egg is implanted into the fallopian tube instead after lab fertilization.

Frozen embryo transfer is popular among older women, when a previously stored egg is thawed and implanted into the uterus.

The Centers for Disease Control and Prevention (CDC) reports 326,468 women who used any form of ART in 2020, the most recently available data, nearly matching figures from 2019.

Of that group, 123,304 women chose to freeze eggs or embryos for future use.

A report published by the Kaiser Family Foundation in 2020 found that 15 percent of women aged 35 to 49 speak to a doctor to seek help with fertility.

This is fueled by a growing trend in American fertility, with many choosing to have fewer children and have them later in life.

A CDC report published this month found that the average woman is now 23.7 years old when she has her first child.

There has also been a noted rise in same-sex couples using surrogates and other fertility treatments to have children over the last decade.

Some have linked the recent uptick in demand for fertility services to the overturning of Roe v Wade by the US Supreme Court last summer.

The explosion in demand has caught the interest of investors hoping to develop new tools to make the process more accessible to the average woman.

The venture funding of fertility-focused technology exceeded $854million in 2022 compared to around $200million in 2015.

Hefty investment in the industry will likely expand the number of fertility clinics across the US, widening the pool of prospective patients.

Nearly 25 million American women of reproductive age live in a place with little if no access to fertility treatments.

The majority of the roughly 500 fertility clinics in the US are in metropolitan areas, alienating many poor women and those living in more remote areas.

One in eight American women deal with infertility, only a third of them receive help.