EXPRESS INFORMER > News & Politics > Full, inside story of how blind man thought he was going mad when money kept vanishing from his safe

An elderly blind man has spoken out about his devastation after discovering his good friend had been stealing from him.

Retiree John Rennie, 79, from Cairns, Queensland, thought he was losing his marbles when he noticed money was disappearing from his safe.

When he installed a hidden camera he was shocked to his core. He was being robbed by a neighbour he thought was a good friend.

‘I was gutted when I saw who was coming into my home and taking my cash,’ said Mr Rennie, who is legally blind and lives alone in Cairns in far north Queensland.

His next door neighbour, taxi driver Pav Taak, was the person caught on camera stealing from the disability pensioner – he even took $100 out of a birthday card.

Disability pensioner John Rennie, 79, was shocked to discover he was being robbed by a neighbour he thought was a good friend

Taak, 47, had befriended Mr Rennie when he moved in seven years ago.

‘My son’s been over there and thanked him for looking after me. You know, by helping me out here and there,’ Mr Rennie told A Current Affair.

After he noticed money kept disappearing from his wallet, his confusion reached the point where he one day asked his daughter, ‘Am I losing it?’

His son suggested he get a safe, which he did.

But then money started going missing from there too, even though Mr Rennie locked it with a code.

His son then suggested they install a hidden camera into the walk-in wardrobe where the safe was kept.

The pensioner had been getting forgetful and so had hidden a front door key in his garden.

‘He saw me find the key to get in and copied it. That must be how he gets in,’ said Mr Rennie.

‘Then I wrote the combination of the safe down and hid that under a clock but he must have found that as well.’ 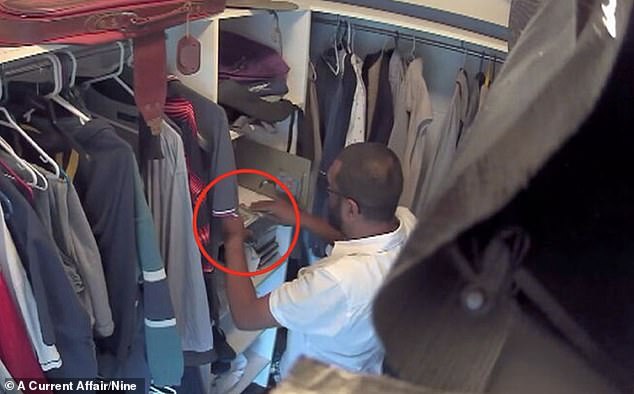 Taxi driver Pav Taak is caught on hidden camera going through the safe of an elderly, legally blind, neighbour

He said Taak had opportunities to enter his home when he was out playing bowls, or stay over at his son’s house.

But perhaps the most shocking deception involved a birthday card.

‘My daughter, whose birthday is the 28th of December, I got her a birthday card, put $100 in that, which I put in the safe.

He said that on another occasion, he hid $400 in a suit coat pocket, which also went missing. 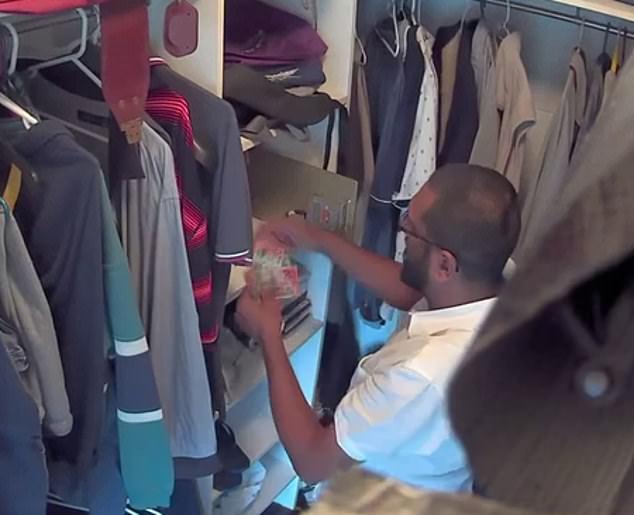 Retiree John Rennie, 79, caught his friend of seven years Pav Taak (pictured), 47, stealing from his safe on a secret camera hidden in his closet

After Mr Rennie brought the videos to the police, Taak was charged with three counts of entering a premises with intent and one count of burglary.

He pleaded guilty to the charges at Cairns Magistrates Court and was given a nine-month jail sentence, which was suspended for a year.

If Taak follows his conditions for 12 months he will not serve a day behind bars.

Taak was also ordered to pay $200 in compensation to the pensioner.

Mr Rennie was very dissatisfied with the outcome, and said justice was not done. 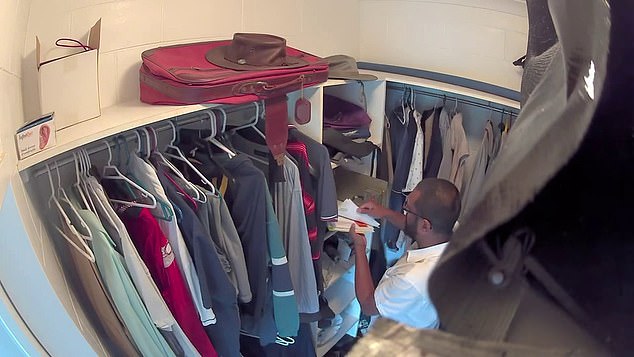 Taak (pictured) was sentenced in the Cairns Magistrates Court to nine months imprisonment, which was suspended for a year. If he follows his conditions for 12 months he will not have to serve a day in jail

‘He’s got off scott free. He was my friend. The b*****d’s in there stealing from me when I’m out and when I come home I give him a beer.’

Taak refused to talk when Channel 9 filmed him, slamming his car door and speeding away.

‘He’s shown no remorse at all and he’s still out there driving a cab, even though his family told me he’d lose his licence because of the conviction,’ Mr Rennie said.

Taak has also not paid the $200 the court ordered him to pay, he said.

Mr Rennie said the experience had not shaken his faith in humanity, ‘just in him’.