MPs last night rejected calls for a further 40 per cent cut in fuel duty and VAT in a Parliamentary debate, despite increasing pressure from rising petrol prices and cost of living squeeze on households.

A petition, which received more than 102,000 signatures and therefore forced a discussion in the Commons, had called on the Government to reduce the skyrocketing cost of fuel in recent weeks.

However, the calls were shot down by the Government, saying drivers are already saving £1,900 on their annual fuel bills compared with what they might have been paying had a pre-2010 fuel duty escalator remained in place.

To be replaced: MPs debated the petition to cut fuel duty by 40% after calls from struggling households for more support during the rising cost of living crisis

Chancellor Rishi Sunak acted at the end of March by introducing a 5p-a-litre fuel duty cut when both petrol and diesel were at then record highs.

However, since then, both have escalated to new highs as prices continue to grow on the back of the Russian invasion of Ukraine, heaping more pressure on Britons’ already squeezed finances.

Data from RAC Fuel Watch, which is based on Experian Catalist’s analysis, shows that petrol on Monday had climbed to a UK average of 169.52p a litre, while diesel hit 181.48p.

MPs from Wales and the Scottish Highlands spoke of the devastating impact these prices are having on their rural constituents, many of which are dependent on their cars for getting to a from work and for medical issues.

Tonia Antoniazzi, the Labour MP for Gower, opened the debate raising concerns of the impact rising fuel costs are having on NHS workers and vital care volunteers in her area, who now can no longer afford to support their local community.

The MPs added that further cuts would only benefit the wider economy in the meantime, stating the wide-scale impact of rising fuel costs on businesses across the UK including supermarkets, taxi drivers, and the NHS emergency services.

However, exchequer secretary to the treasury, Helen Whateley, said that cutting VAT costs would not help businesses, who already benefit from claiming back their expenses.

She also concluded by calling out the MPs present for using the petition to continue their lobby for an emergency windfall taxes, instead of focusing on fuel duty cuts. 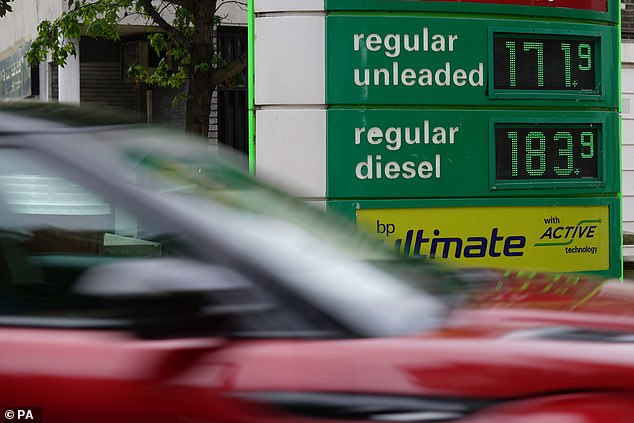 A petition calling for fuel tax cuts has received more than 102,000 signatures and therefore forced a discussion in the Commons to tackle the skyrocketing price of petrol and diesel

The petition, which was initially raised before the Russian invasion of Ukraine and before the current peak prices for fuel were met, unfortunately reflects on the desperate times millions of families find themselves in.

In their petition, they wrote that the Government have the ability to sacrifice some revenue to help the general public, as the public is already doing what they can to save on rising petrol costs.

They said: ‘The price of diesel and petrol is at an 8-year-high. While the people are accepting the conversion to electric vehicles, the anticipated 30 per cent + rise in fuel costs along with the price of new electric vehicles is a strain for the UK public.

‘We believe people may understand to a degree the need for tax following the pandemic however prices of £1.50 or more per litre will cancel out any understanding.

‘The Government has the ability to sacrifice some revenue to appease the British public.’

Ahead of the debate, the Petitions Committee conducted a survey of the petitioners to hear how recent increases in the cost of fuel are affecting them, finding that many respondents need to drive for their job, or to access essential services.

Many respondents were calling for the Government to do more to reduce the cost of driving, as they told the Committee they were having to make difficult sacrifices just to get by.

They also found that 62 per cent of respondents said rising fuel costs have had a ‘significant effect’ on their social life, with 38 per cent saying it has impacted their ability to do their job or run their business.

However, it comes as no surprise that the Government is not inclined to further cut costs of fuel, focusing on the fact that fuel duty has been frozen for 12 years.

The news also comes two months after Rishi Sunak’s Spring Statement where he announced a 5p cut to the levy on every litre of fuel, from 57.95p-a-litre to 52.95p as part of efforts to ease the burden of record petrol and diesel prices on motorists.

In its response to the petition provided on 17 November 2021, they initially said: ‘The Government is taking targeted action to help families across the UK with the cost of living, which includes freezing fuel duty in 2022-23, the twelfth consecutive year.’

The Government has committed to their position that drivers are ‘already saving £1,900’ on their annual car fuel bills compared with what they might have been paying had a pre-2010 fuel duty escalator remained in place.

Prior to the debate, the government also issues a statement on the proposed VAT cuts, suggesting it would cost the Exchequer too much to introduce.

The Government said: ‘While the rationale of this petition is appreciated, any reform to the current VAT treatment of road fuel would carry a significant cost to the Exchequer, and this should also be seen in the context of the over £50billion of requests for reliefs from VAT received since the EU referendum.

‘Such costs would have to be balanced by increased taxes elsewhere, increased borrowing or reductions in Government spending. Given this, there are no current plans to change the current VAT treatment of road fuel.’

Simon Williams, RAC fuel spokesman, said: ‘It’s clear just how many drivers feel strongly about the extremely high prices they currently face every time they fill up, which is no doubt why pressure is mounting on the Government to go further in helping them manage their spiralling costs.

‘The simple fact is that the historic fuel duty cut hasn’t protected drivers as much as hoped from further record high pump prices.

‘Wholesale fuel prices kept on rising after the cut was announced, largely cancelling it out, and some retailers even started taking a bigger margin than they did before.

‘A temporary cut in VAT would have made more sense and we continue to believe such a move should be seriously considered by the Government.

It’s also important to remember that the Treasury is actually benefiting from prices being so high as it makes more in VAT, which seems wrong given the current cost-of-living crisis.’

The cost of petrol and diesel has sky-rocketed to an all-time high in recent weeks.

This week, petrol prices are holding steady at around 168p per litre, with diesel at an eyewatering 181p per litre, however, the RAC has said these prices are likely to continue to rise.

Oil prices surged after Russia’s invasion of Ukraine due to supply fears, leading to a rise in forecourt prices, while prices were already increasing as global economies recover from the coronavirus pandemic.

Experts say the possibility of motorists paying record prices at the pumps could go on for some time, meaning no respite for Britons already facing a cost of living crisis.

Meanwhile, the AA has said that UK drivers should continue to expect further price hikes over the next two weeks, adding that even if the government had supported the fuel duty cuts, it’s not likely the savings would have been passed on to drivers.

Luke Bosdet, the AA’s fuel price spokesman said that the only long-term solution is to introduce the fuel price transparency in the UK, as created by the Consumer Council in Northern Ireland.

The Fuel Price Checker is a free site that allows consumers to check the highest, lowest and average price of petrol and diesel in their area in Northern Ireland, to ensure they are getting the best value when topping up their tank.

Luke said, ‘Northern Ireland’s Consumer Council is showing Business Secretary Kwasi Kwarteng and the Competition and Markets Authority how to put pressure on retailers by directing drivers to the competitive ones.

‘It is so simple, doesn’t cost the earth, can be set up in a few weeks, has been done in Europe for years and the AA has been calling for it UK-wide for ages.’

In the meantime, Luke added that cutting back on spending is the only option for UK drivers.

He said, ‘Drivers already under the cosh from record pump prices face an even bigger hole in their budgets.

‘Little wonder then that 23 per cent of our members, rising to 34 per cent among lower-income groups, aren’t going on holiday this year.

‘Cutting back on other spending is the only option for many people who have to use their cars to get to work or essential family trips, such as shopping.

‘Day trips rather than week-long holidays may be the only way that many will cope this summer.’