The FTSE 100 index reached a 20-month high on Tuesday, as the price of oil surged and a spate of companies posted bumper profits and sales.

Rising for a third consecutive session, the blue-chip index has been bolstered by health and hygiene consumer goods firm Reckitt Benckiser, which saw its share price jump 6 per cent.

Upticks in the price of oil and energy firm stocks, as well as housebuilders and banks, have helped lift the FTSE 100 higher.

Housebuilders Barratt Developments, Berkeley Group and Taylor Wimpey were among the top 10 biggest FTSE 100 risers today. Firms in the sector are enjoying a spike in demand and higher sales and profits.

While suffering from stinging staff shortages, Premier Inn owner Whitbread has also fared well today. The group said its recovery in recent months had been better than expected, and UK demand had been ‘very strong’ since 17 May when Covid restrictions were eased to allow overnight stays at its hotels.

It added that it now expects revenue-per-room rates to return to pre-pandemic levels next year.

Energy prices globally are also high, with crude oil back above $80 per barrel.

Oil prices remain near multi-year highs, supported by a global supply shortage and strong demand in the US, the world’s biggest consumer.

Steve Clayton, head of equity funds at Hargreaves Lansdown, said the jump in markets had, in part, been driven by a ‘relief rally’ following the development of successful vaccines.

More recently, however, the spike has been driven by strength in the share prices of natural resource and energy companies, alongside recoveries in the shares of leading banking groups.

Mr Clayton told This is Money: ‘The recovery in economic growth has created buoyant demand for energy, especially for gas in Europe.

Oil: Brent crude oil prices are now over $80 a barrel, after slumping at the height of Covid-19

‘Some point the finger in Russia’s direction, arguing that supplies are being held back, with the aim of forcing Europe to commit to make a bigger long term commitment to buy Russian gas. But energy prices globally are surging, with crude oil back above $80 per barrel.

‘All this is very supportive for the prices of energy producers, indeed between them, the increase in the prices of BP and Royal Dutch Shell in October have accounted for over a quarter of the index’s gain, month to date.’

He added: ‘Other commodities beyond energy are also rallying, helping mining shares to perform strongly. When you add the gains made by miners like BHP, Glencore and Anglo American to the contributions made by the energy majors and HSBC, Barclays and Lloyds, most of the market’s recent rally is accounted for.’

Mr Clayton said: ‘Stronger economic growth means an earlier end to the era of ultra-low interest rates. No-one is expecting rates to soar, but even small increases can lift the earnings of banks by a lot.

‘HSBC this week predicted that their income would be boosted by as much as $8billon a year were rates to move up by as little as 1 per cent. No surprise then to see the 14 per cent increase in HSBC’s stock during October making the biggest individual contribution to the markets rally this month.’

Speaking to This is Money, Russ Mould, investment director at AJ Bell, said: ‘Over the past month, the best performing sector indices within the FTSE 350 are Oil & Gas, Banks and Precious Metals & Mining (and Industrial Metals & Mining is ranked sixth out of the 40 groupings).

‘This is all meat and drink to the FTSE 100, which, according to aggregated analysts’ consensus forecasts, is expected to derive 47 per cent of its sales, 60 per cent of its profits and 45 per cent of its dividends from oils, bankers and miners in 2021.’

Richard Hunter, head of markets at Interactive Investor, said: ‘We are thick in the middle of the reporting season on both sides of the pond and the news is “so far, so good”.

‘Despite inflationary pressures, supply chain blockages and a tightening labour market, companies are for the moment weathering the storm.

‘This has pushed the S&P 500 and Dow in the US to new record highs, while in the UK strong numbers from Reckitt and Whitbread have also propelled the FTSE 100, which now stands ahead by 12.5 per cent in the year to date.

‘Underpinned by strength in cyclical sectors over recent days, such as the housebuilders, miners and oils, the UK’s premier index is still being seen as undervalued on valuation grounds compared to many of its international peers.

‘However, sentiment remains guarded as the prospects of monetary tightening loom large both in terms of stimulus withdrawal as well as potential interest rate hikes in the UK’ 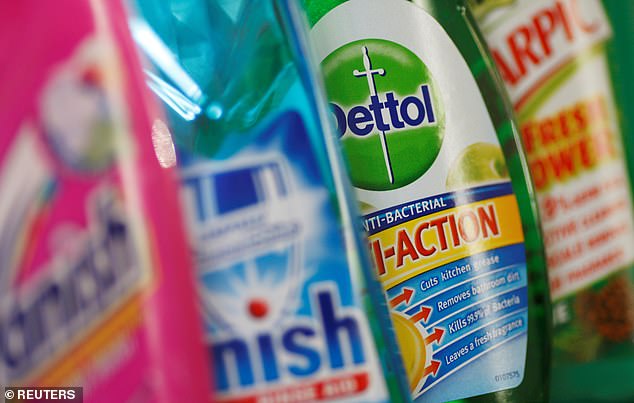 Dividends from UK-listed firms have soared over the past three months, buoyed by big payouts from London’s biggest miners.

Payments in the third quarter of 2021 rocketed to £34.9billion, marking an 89 per cent increase year on year, according to data from financial tech firm Link Group.

The increase was attributed to ‘large one-off special dividends’, however underlying dividends, which do not include specials, also surged 53 per cent to £27.7billion.

In terms of what the future holds for the markets, Mr Clayton said: ‘The strength and duration of the rally is likely to be set by the durability of the current economic expansion. Much of that will depend on how far and how fast that central banks around the world move in their efforts to prevent inflation building up.

‘With global leaders gathering in Glasgow for the Cop 26 environmental summit in just a few day’s time, perhaps the world should be worrying that the stock market is pointing to full steam ahead for shares in industries that have long been associated with pollution, greenhouse emissions and inequality?’

While record-low interest rates and easing of pandemic restrictions have aided the FTSE 100’s  recovery this year, the index has still underperformed its European and US peers due to a large presence of volatile commodity stocks.