EXPRESS INFORMER > Health & Medicine > From the Mediterranean to longevity diets and fasting, which diet is best for you?

Thoughts of cutting back kick in for many shortly after Christmas, as part of a ‘new year, new me’ drive.

But the swathes of different dietary advice can be overwhelming.

The much-hailed Mediterranean — packed with vegetables, wholegrains and nuts — is labelled the diet that ‘trumps all others’ by some experts. A-listers like Penélope Cruz and Cameron Diaz swear by it.

Other science-backed options include diets that promise to make you live longer to eating patterns that see you avoid food for 16 hours a day.

MailOnline asked four top experts to share their thoughts on the best diets for losing weight in January.

Lunch: A vegetable and bean stew with barley

Dinner: A fish dish with fresh herbs, tomatoes and olives for dinner

Sweet foods are only eaten occasionally

It’s hailed by doctors and scientists for its menu of fruit, vegetables and wholegrains.

A plethora of evidence suggest that it boosts heart health because it cuts out saturated fat — allowing for only a low consumption of butter, fatty meats and pastry.

It is also rich in monounsaturated fats, from olive oil and nuts, and omega 3 fatty acids, from seafood, which support a healthy heart.

Research has also linked the diet to a low risk of type 2 diabetes and strokes. Scientists believe these effects are down to the diet reducing inflammation inside the body, as well as blood sugar and BMI.

Professor Tim Spector, author of Food for Life and Spoon Fed, told MailOnline that science ‘points to one dietary pattern that trumps all other diets for all outcomes’.

He said: ‘The Mediterranean diet (MD), seamlessly brings together many aspects of what to eat, when to eat and how to eat, with plenty of scientific evidence to back it.

‘The Mediterranean diet is not to be underestimated.

‘Many think it is only relevant to European cuisines and some might even be mistaken in thinking it includes eating lots of refined carbohydrates like pasta.

‘When in actual fact it’s a dietary pattern and not a prescriptive list of ingredients.

‘For instance, the MD is characterised by the majority of our energy coming from whole plants, and includes whole grains, beans, nuts, spices, herbs and seeds as a major players.

‘It does not specifically recommend pasta and pizza, but it does recommend using extra virgin olive oil as a main source of dietary fats, with that being the only truly “prescriptive” ingredient, and with good reason.’

Meanwhile, saturated fat — such as butter, red meat and cakes — have been deamonised for decades because of its link with high cholesterol and heart disease.

‘Being active every day and enjoying our meals with family and friends is an often overlooked component but one that we must try to integrate into our everyday life.’

While a good diet offers some health benefits, staying active and social — traditionally an important part of the Mediterranean lifestyle — is also vital.

Breakfast: Coffee or tea with a cinnamon raisin bagel or two slices of toast, topped with apricot jam

Lunch: Pumpkin soup with croutons, with a side of mixed green salad made with cucumbers, carrots, tomatoes and brown bread

Scientists have long been on the hunt for ways to extend life and healthy years.

A diet rich in wholegrains, such as brown rice, legumes, such as black beans, and plant-based protein, such as chickpeas, is one way to do this, researchers say.

The ‘longevity diet’ also involves fasting for 12 hours a day and entirely ditching red meat — although those following it strictly are still allowed ‘some’ of their favourite treats.

Some fish is allowed and chicken intake has to be kept ‘very low’. Sugar and refined grains — such as white bread, pasta and cereal — need to be scaled back.

The diet is the brainchild of researchers from the University of Southern California, who reviewed hundreds of studies on nutrition over the last decade in their quest to unearth the diet that ‘offers the best chance of living for longer and healthier’.

Following this diet can ‘delay ageing’ and reduce the risk of developing age-related diseases, including diabetes and cancer, the researchers said.

Lead author Dr Valter Longo, an expert in ageing and biological science, argued ‘its not a dietary restriction intended to only cause weight loss’.

Instead, it aims to slow ageing and ‘aid in avoiding morbidity and sustaining health into advanced age’.

A plethora of evidence shows these eating patterns would encourage healthy cell function and ward off obesity, diabetes and cancer.

Dr Romina Inés Cervigni, director of Dr Longo’s research foundation, told MailOnline that the macronutrients in a diet — especially proteins and sugars — can ‘directly activate and increase’ the levels of some hormones and genetic pathways ‘that are associated with accelerated aging’.

‘Ageing is considered the main risk factors for age-related diseases such as diabetes, cancer, cardiovascular, and neurodegenerative diseases,’ she said.

A balanced diet that promotes healthy weight and supports pathways in the body can reduce the body’s ageing while extending lifespan and healthy years of life, Dr Cervigni said.

The benefits of the diet are larger the earlier it is adopted but even starting at 80-years-old can increase a person’s lifespan by three-and-a-half years, she predicted. 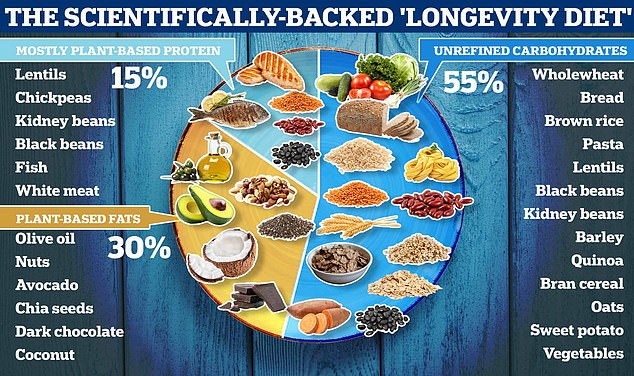 US researchers have set out a ‘longevity diet’ — one that can offer the best chance of living for longer and healthier — after reviewing hundreds of studies on nutrition conducted over the last century. They say the ‘optimal diet’ should include a lot of legumes (pictured) — such as lentils and beans — as well as whole grains and vegetables

What to eat on a fasting day

Lunch: Tomato and lentil soup, with a bread and roll and butter

Only 800 calories should be consumed on a fasting day

The 5:2 and 16:8 diets have soared in popularity in recent years, and for good reason, experts say.

Both are based on intermittent fasting, which involves eating healthily at certain times and not eating at others.

The 5:2, fashioned by Mail health guru Dr Michael Mosley, involves eating little — around 500 to 800 calories — for two days per week and following a healthy diet for the remaining five days.

The 16:8 involves fasting for 16 hours every day and eating healthily within an eight-hour window, normally between 10am and 6pm.

Although this covers most of the waking day, it rules out late night snacking.

Some studies suggest it helps with weight loss, which has the obvious knock-on effects for those who are overweight or obese, such as a lower risk of developing serious illnesses, such as coronary heart disease and diabetes.

It has also been linked to living longer and a reduced risks of some cancers and neurodegenerative disorders.

However, others have found that fasting is not more effective than dieting seven days per week — with scientists warning the approach is ‘no magic bullet’.

But Dr Katie Myers Smith, a chartered health psychologist and senior research fellow at Queen Mary University of London, told MailOnline: ‘Fasting diets are a popular dietary approach most likely due to its simplicity.

‘The 5:2 diet requires calorie restrictions on just two days of the week which for many people is a much more manageable approach.

‘Weight loss is realistic (i.e. a pound per week) which make it more likely that the diet be maintained in the longer term.’

Even those not looking to shed weight can switch-up their diet for health benefits.

A psychobiotic diet, which involves eating lots of fibre and fermented foods, can lower stress and boost sleep, according to emerging research.

The approach involves eating six to eight servings of fruit and vegetables per day that are high in prebiotic fibre, such as onions, leeks, cabbage, apples and bananas.

Those following it also consume five to eight servings of grains per day and three to four legumes per week, as well as two to three fermented foods daily — such as sauerkraut, kefir and Kombucha.

Researchers at University College Cork, who studied participants who previously followed a relatively low-fibre diet, found that those who adopted the plan for four weeks saw their stress drop by around a third and sleep quality improve.

The diet is thought to work by feeding the trillions of microbes in the intestines, which are in constant communication with the brain through a mechanism known as the gut-brain axis.

Professor Ted Dinan, emeritus professor of psychiatry at the university, told MailOnline: ‘I would recommend at least two daily portions of yogurt, kefir or kombucha.

‘In terms of prebiotics, at least two sources of fibre are required, such as Jerusalem artichoke and leaks.

‘A non fibre source of prebiotics is desirable, such as an oily fish.’